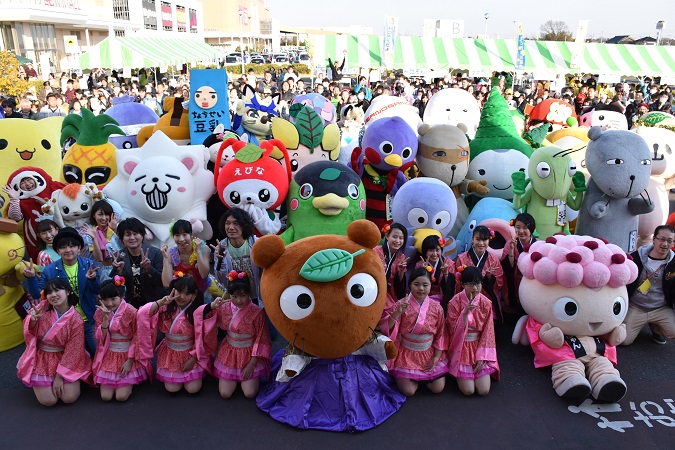 November in Japan is when the leaves reach their peak autumn beauty, and the first cold winds remind you that winter is not far away! November is full with a variety of autumn parades, an international carnival in Okinawa, and even a famous World Character Summit in Saitama! Here are the top 10 things to do in Japan in November 2019!

The autumn leaves of Mt. Tsukuba begin to color around the summit from around late October, and in the middle of November when it is in full bloom, it becomes crowded with many tourists near the Tsukuba shrine and the summit. Besides various events held during the festival period, a light-up of the autumn leaves is also done on weekends only.

This event originated as a grandfather’s grand festival in autumn and is referred to locally as “a festival of guardians.” It is a beautiful event that’s reminiscent of the era, full of emotion and elegance. The highlight of this festival is the procession of 10 stunning luxury Edo-style floats being paraded around the late-autumn Nakasendo atmosphere.

This bamboo illumination festival is held every year on the first Saturday and Sunday of November. Bamboo lanterns are lit up in the streets, and local people make and display impressive handmade bamboo crafts and art.

This lively and popular festival is held for three days from November 2-4 every year. A huge hikiyama decorated with lacquer is paraded around the old castle town in Karatsu City along with flute, drum and bell music.

This is one of the thee biggest fire festivals in all of Japan. About 30 trees (10 meters high, each weighing 3 tons) are walked through the city and then set afire at the festival venue.

This is one of the three biggest festivals in Hiroshima, and it has history and traditions that have lasted for about 400 years. In addition to selling bamboo rakes decorated with lucky prosperity charms, other goods are for sale along the Ebisu shopping street. At night, there is Kagura music as well as a drumming contest.

This is one of the three major festivals in Kyushu. The most popular elements of this festival are the massive tortoise figure with the head of a snake, along with the ritual of the Goshinko march.

This festival is held every year for one weekend in November. Character Summit is a local event that features dozens of local characters and mascots. In this fun, family-friendly event, local mascots from all over Japan participate in stage shows, dances, meet and greets, and more. The event promotes town development and also communicates the charm of the individual regions.

This festival is held every year on the last Saturday and Sunday in November. It is an international event in Okinawa City, where people from 45 different countries call home. Festivities include a citizen’s parade and International Tug-of-War. The festival grounds are the Koza Gate street and the neighborhood around the Ebisuya Crossroads.

This festival is held ever year on the fourth Saturday of November. Around 5000 naked men flood the city in this lively festival. Starting at Hofu Tenmangu shrine, they carry a huge wickerwork rope and two portable shrines to the Katsumanoura Port, then come back to the shrine. This is a very physically-demanding festival, as the trek up and down the stone steps is especially difficult. On the following day, a women’s mikoshi parade will be held.