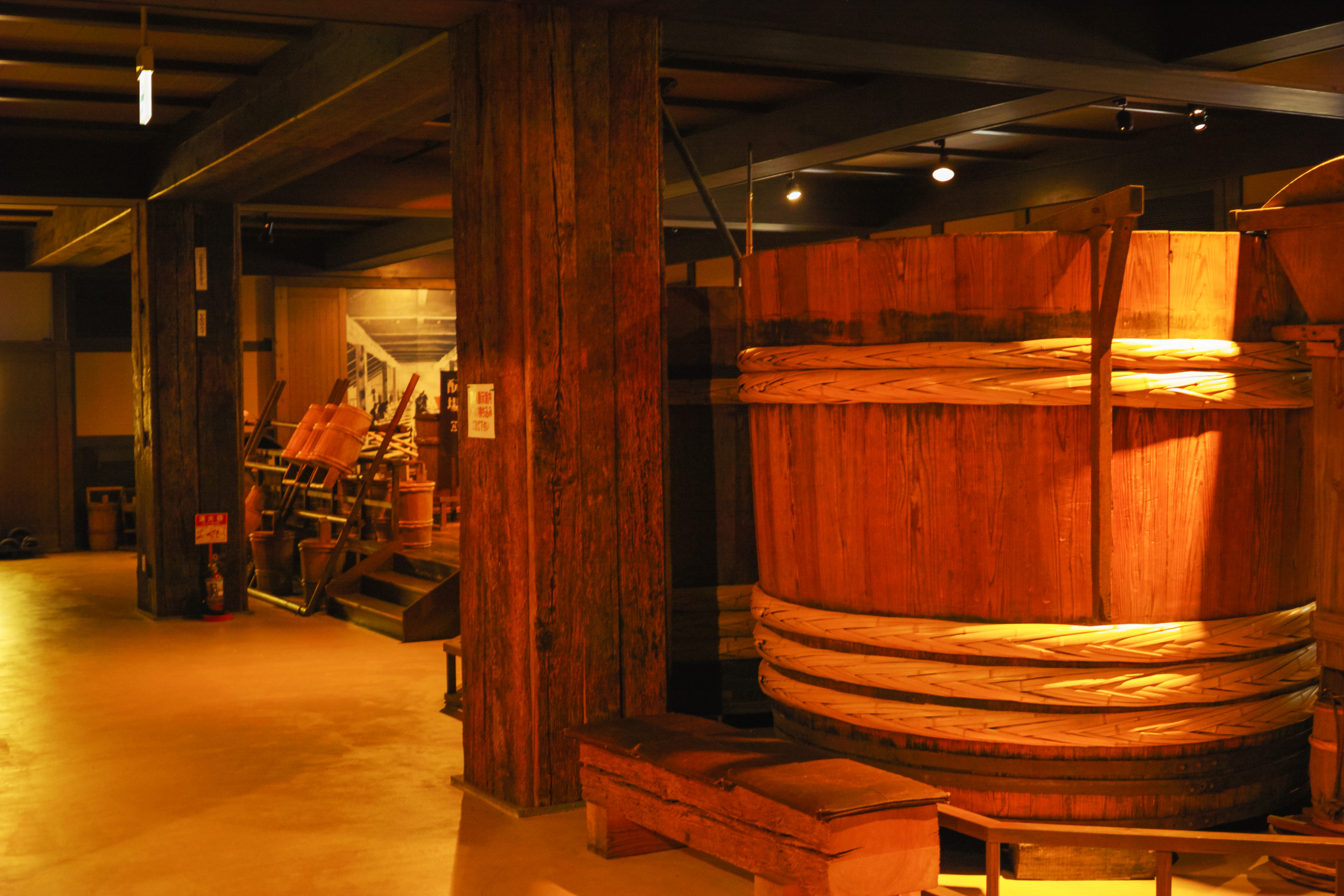 Sake(酒) or Japanese rice wine is a traditional alcoholic beverage that has been an important part of Japanese lifestyle and culture for centuries.

With the popularity of Japanese cuisine worldwide, the appreciation for sake has spread to international markets.

Although steeped in history, it is unclear when sake began but there has been evidence that sake has been produced as early as the Yayoi period (300 B.C – 250 A.D) when rice cultivation was brought into Japan from China. A special group called the Sake-no-Tsukasa was even formed to produce sake for the Imperial Court. Sake was primarily made in temples and shrines during the Heian Period (794 – 1185) until sake breweries started making them during the Muromachi Period (1333 – 1573). It was also during that time that the Muromachi Shogunate started imposing taxes on sake production as a source of revenue for the government. In late 16th century, sake started undergoing heat sterilization or pasteurization process called hire (火入れ) and large wooden vats were developed for storing large volumes of sake at one time.

It was during the Edo period (1603 – 1868) that sake became a thriving industry and the process was even further refined with the introduction of distilled alcohol for adjusting the flavor and preserving it longer. In 1904, the National Research Institute of Brewing was formed to conduct scientific research into sake making and discover new ways and technologies to improve its production. 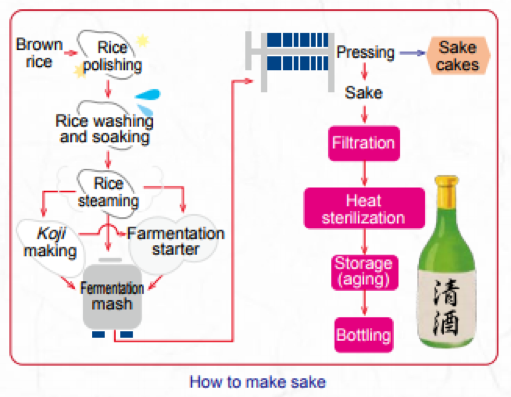 People drank sake on special occasions such as festivals, marriages, and funerals but nowadays it is a beverage enjoyed for almost any occasion.

Sake is made from rice, koji, and water and put through the process of fermentation with yeast. The yeast produces alcohol and CO2 from the breakdown of the carbohydrates in rice. The resulting product is a fermentation mash and the alcohol are separated by pressing the mash and removing the solid sediments. The alcohol is then further filtered, sterilized, and stored for aging before it is eventually bottled and sold for consumption.

Since sake is made from rice, there are special varieties of rice that are grown specifically for sake making called shuzo-kotekimai. The rice they use is white, polished rice and since they contain protein, they use koji to break down that protein into amino acids and peptides. These compounds provide umami(旨味), taste. Polishing the rice is important because it removes the outer layer of the rice (bran) to remove any excess proteins and oils and develop its own special aroma. The degree of polish also determines the quality of the sake. Normal table rice is 10% polished but sake rice is usually 30% polished. Special refined rice wines (daiginjo-shu) are polished 50% or more before being fermented. Some of the finest daiginjo-shu is made with 70% polished rice. 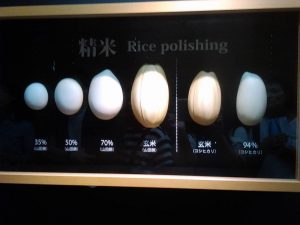 After the bran has been polished from the rice, it is then soaked in water to absorb adequate moisture. Sake is made during the winter season and cold water is used so washing the rice becomes a very arduous job. The rice is then drained and covered with cloth overnight before being steamed. Steaming the rice makes it easier for the koji enzymes to break it down. Steamed sake rice is still firm unlike table rice which can get sticky and that distinction is important because koji works best when the rice grains are separated from each other. Of all the rice used for sake making, only 15 – 25% is used for koji making, the rest is used for the fermentation mash. 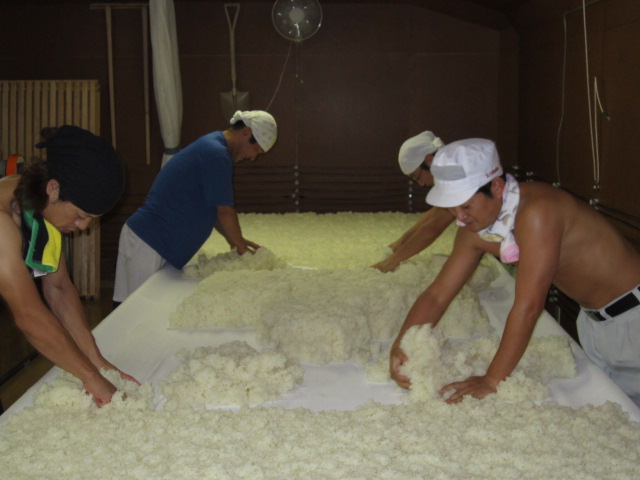 Koji is made by cooling down the steamed rice and bringing it to a koji room where the rice is spread out on a long table called the toko. The spores of the koji (Aspergillus oryzae) fungus are then spread over the rice. The rice is then mixed together with the koji and covered in a cloth to keep the temperature and humidity constant. The koji will produce heat from its metabolism so the mass is spread out again to regulate the temperature. White areas then form over the rice grains called haze which are areas of koji growth and it completely covers the grains after two days. The koji mold produces enzymes which are a key component in the fermentation process to produce starch from the rice into sugar. The addition of yeast then makes it possible to convert the sugar into alcohol.

The water used in sake production is equally important since 80% of sake is composed of water. It is also used for making the fermentation mash as well as for washing and soaking the rice. The ideal water constituent for Sake making is higher hardness, higher phosphorus and lower iron. The iron content in the water used for sake production needs to be kept as low as possible to prevent a reddish brown discoloration and an unpleasant aroma. An iron content of 0.02 ppm or lower is ideal (tap water quality standards are at 0.3 ppm) so regions with very low iron content water are usually where sake breweries are put up like at Nada in Kobe and Fushimi in Kyoto.

There are different varieties of sake and it is up to your individual tastes to find the right one for you. Sake is evaluated based on its color, taste, and aroma. A special ceramic cup called a kikichoko is used by professionals to evaluate sake.

How to Evaluate Sake Quality

Color: Sake that is dark yellow or brown means it has been stored for a long time. The kikichoko has blue circles at the bottom to help you identify the color and transparency.

Aroma: This is evaluated on the basis of their strength and balance. Aged sake tends to be rich with a fruity aroma called ginjo.

Taste: They classify this using the scales of sweet/dry, rich/light, and with/without umami. Sake with lots of sugar tends to be sweet but less sugar content makes it taste dry. Acidity also plays a role so even if the sugar level is the same, acidic sake will taste drier while less acidic sake will be sweeter. Rich sake results from a high content of alcohol, sugar, acid, or amino acids while light sake results from reduced content of these ingredients. Sake with high levels of amino acids will become unpleasant if aged too long.

Sake is unique in that it can be consumed at various temperatures and with various dishes. Ginjo-shu has the aroma of apples or bananas and is best taken cool and best drank during the first half of dinner. Junmai-shu usually has a rich taste and is best paired with rich-tasting food that is cooked with soy sauce, sugar, and oils. Honjozo-shu can be taken at any temperature and generally goes well with any dish.

Would you like to improve your Japanese? We have free lessons on our Youtube channel.
Get you original Hanko @ https://japanese-name-stamp.com