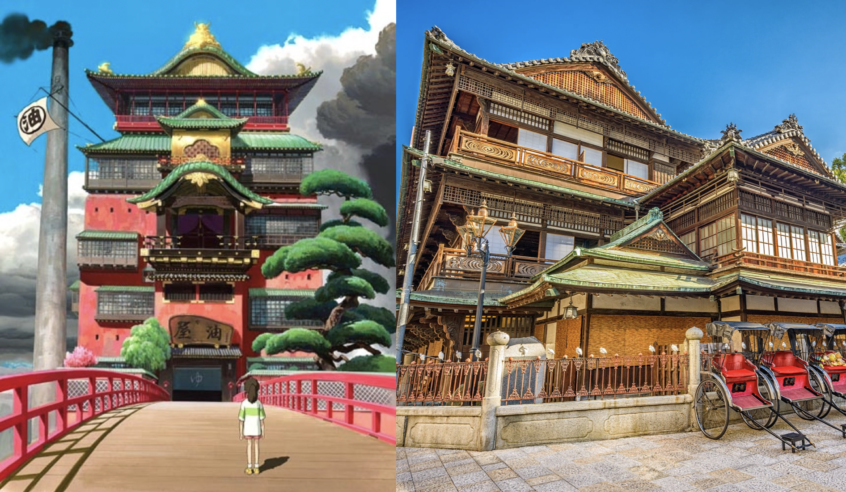 When you were young, did you daydream about visiting the bathhouse in Spirited Away, or wandering through the forest from Princess Mononoke? Studio Ghibli (スタジオジブリ) is a household name in Japan and has also gained recognition around the world. However, some international Studio Ghibli fans might be surprised to learn that several of the settings in their beloved childhood films are actually real places in Japan! Here’s a list of Studio Ghibli films’ real-life locations that true fans would definitely want to check out.

Even those who haven’t seen the international hit Spirited Away are likely to be familiar with the iconic bathhouse where the majority of the film is set. The bathhouse’s exterior was said to be modeled after a few different onsen in Japan, but the most well-known source of inspiration is Dōgo Onsen (道後温泉) in Ehime Prefecture. Some people boast that it is the only onsen that inspired the one in the film, even though Miyazaki himself says there were actually several.

Dōgo Onsen has another claim to fame in Japan – with  history dating back over 1000 years, it is one of the oldest hot spring resorts in Japan. The multi-storied main building closely resembles the bathhouse in Spirited Away, but lacks the film’s famous red bridge, which Miyazaki took from a different onsen. 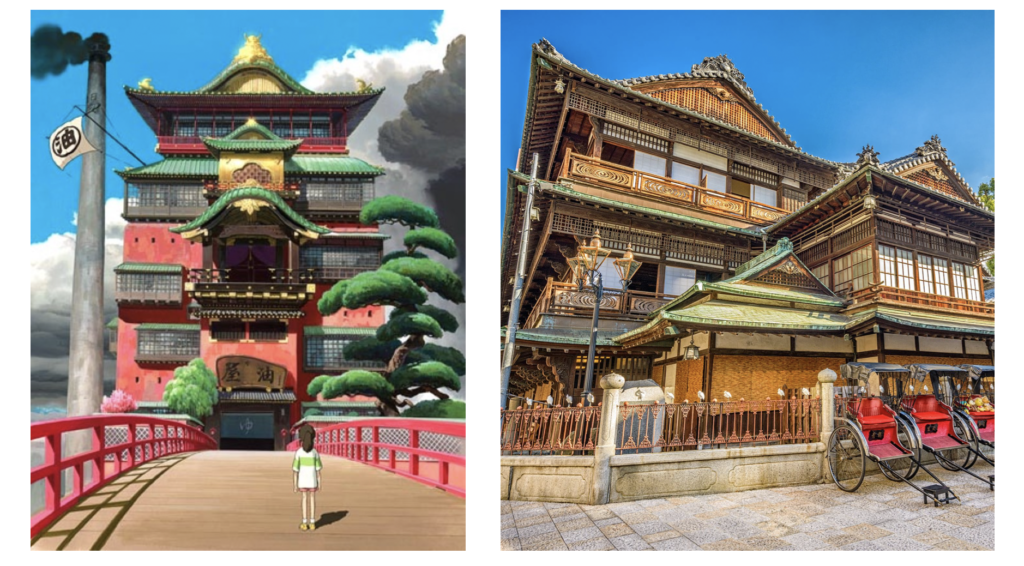 Fans of Spirited Away likely also remember Kamaji, the old man who operated the boiler room. But the boiler rooms where Kamaji worked wasn’t modeled after an actual boiler room – it was actually inspired by the stationary store Takei Sanshodo (武居三省堂 ) in the Edo-Tokyo Open Air Architectural Museum in Tokyo. The museum features around 30 reconstructed buildings that have relocated from around Tokyo. Many of these historic buildings date back to the Meiji Period, and range from traditional farms and houses as well as Western-inspired  offices, and shops.

The museum is located in a park in Musashi Koganei. Miyazaki says that he often visited the museum to get inspiration for his work because Studio Ghibli, is also based in Koganei City. Apart from the iconic wooden walls of shelves, many other parts of the Spirited Away bathhouse were inspired by the interiors of this museum. Miyazaki himself also designed the museum’s mascot, Edomaru.

The eerily beautiful forests of the film Princess Mononoke were modeled exactly after the atmosphere of the Shiratani Unsuikyō Ravine (白谷雲水峡) on Yakushima Island in Kagoshima Prefecture. The lead artist, Kazuo Oga, spent hours in the forests sketching the trees, moss, stones, vines, and fog. These days, the forested island and its famous ravine are popular with Mononoke fans, who often bring along their Kodama figurines to photograph among the mossy stones and trees. 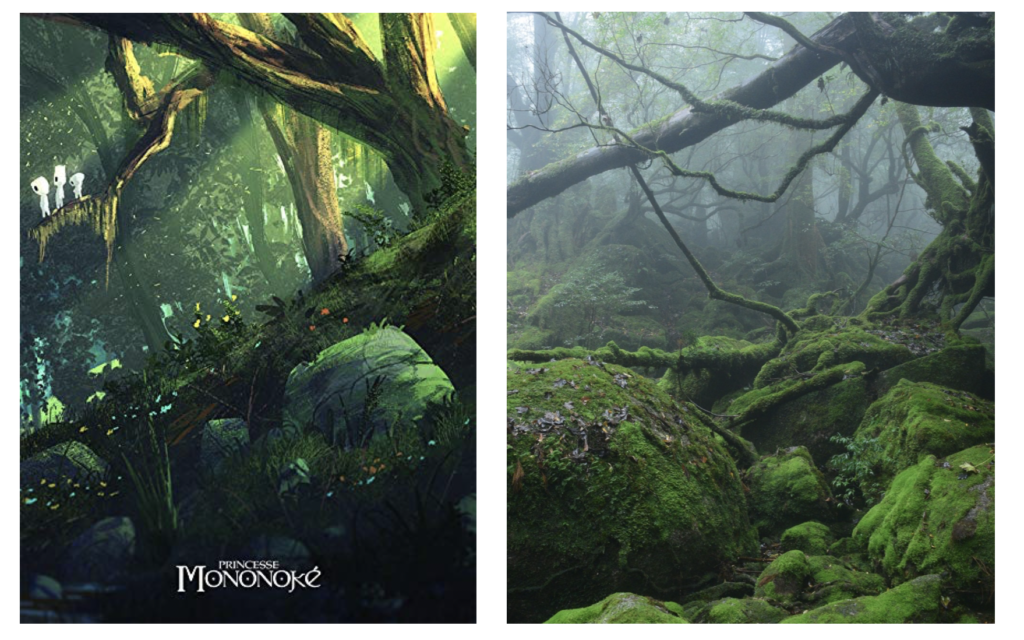 Fans of the classic 1988 film My Neighbor Totoro definitely don’t want to miss a visit to Satsuki and Mei’s House. Located in Ai Chikyuhaku Memorial Park inNagoya, Aichi Prefecture, this house was built to be an exact replica of the one in the film. Even the trees and surrounding landscape resemble that of the film.

The replica house was constructed with incredible attention to detail to match the film as closely as possible. The house’s exterior was painted to look weathered, and there’s even a well in the backyard. The study inside is full of books and papers, and the kitchen even has the same calendar on the wall. Visitors can even open up drawers to look through Satsuki and Mei’s belongings. Tickets can be bought early from any Lawson convenience store, and one ticket will get you one 30-minute viewing session of the house.

Apart from just Satsuki and Mei’s house, the green forests of My Neighbor Totoro were also based on a real place in Japan: Sayama Hills, which are also widely referred to as “Totoro no Mori” (Totoro’s Forest), are located around 35 km north of central Tokyo on the border of Saitama Prefecture. Miyazaki himself actually grew up in Sayama Hills, which explains why the lush forests and charming farming landscape would be an important source of inspiration for this classic film. In 1996, he even helped establish a foundation to save parts of the area’s forests from development.

The most famous place inside the Totoro Forest is the Kurosuke House, which is also known as “Totoro House”. The house is named after the soot sprites in Totoro, which are called “Makkuro kurosuke” in Japanese. The same soot sprite characters also appeared in “Spirited Away” but they were called “Susuwatari”. Kurosuke House has a huge Totoro sitting inside, as well as some scenes from the movie on display. Visitors are allowed to take pictures with the Totoro.

Miyazaki’s tenth animated film as a director was Ponyo (2008), a film loosely based off of Hans Christian Andersen’s The Little Mermaid. In the film, a girl who is part fish and part human wishes to see the human world. She gets stuck in a glass jar and washes ashore in a small village that was inspired by Tomonoura (鞆の浦), a picturesque fishing town on the end of Fukuyama City in Hiroshima Prefecture. The town overlooks the Seto Inland Sea, and takes on a distinct horseshoe shape that is easily recognizable in the film.

The real port town of Tomonoura includes several elements as seen in Ponyo, including the views of the surrounding sea and mountains, the red-roofed house which inspired Sosuke’s and Risa’s house, and the Joyato Lighthouse, a historical landmark of the town. The fishing boats and piers, the winding roads, and of course the horseshoe-shaped harbor, all appear in real life just like they did on screen.

The Secret World of Arrietty is a 2010 Studio Ghibli movie based on Mary Norton’s children’s fantasy novel The Borrowers.  The film tells the story of a group of tiny people who live under the floorboards of a home in Koganei, western Tokyo. However, the model for the house and garden that appear in  Arrietty is actually Seibien Garden in Hirakawa City, Aomori Prefecture.

This estate was completed in 1911, and blends both Japanese and Western architectural styles. The house is surrounded by a landscaped garden that is a nationally-designated “Place of Scenic Beauty” in Japan. Certain shots and angles in the film are unmistakably recreated from this unique house and garden – the Western-style white wooden doors, curved roof tiles, and the stone garden path, to name a few. 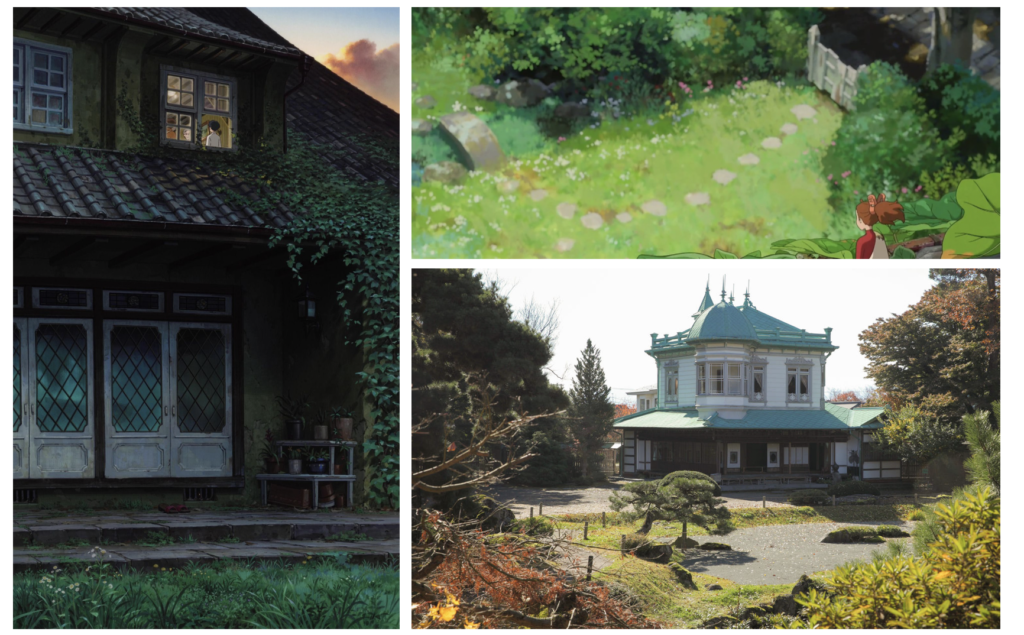 The Wind Rises was Miyazaki’s last full-length film before the he announced his retirement from directing in 2013. The film’s story was inspired by the life of real-life aeronautical engineer Jiro Horikoshi, who designed Mitsubishi’s A6M Zero fighter.

In The Wind Rises, the protagonist visits a hotel called Kusakaru Hotel that plays an important role in the film. Located in the mountains, the fictional Hotel Kusakaru very closely resembles the Kamikochi Imperial Hotel in Kamikochi, Nagano Prefecture. It has not been officially stated that this hotel is the one used in the movie, but the resemblance is uncanny – even down to little details. Built in 1933, the Kamikochi Imperial Hotel was built a log-cabin exterior and distinct red roof that’s almost identical to the hotel in the film.