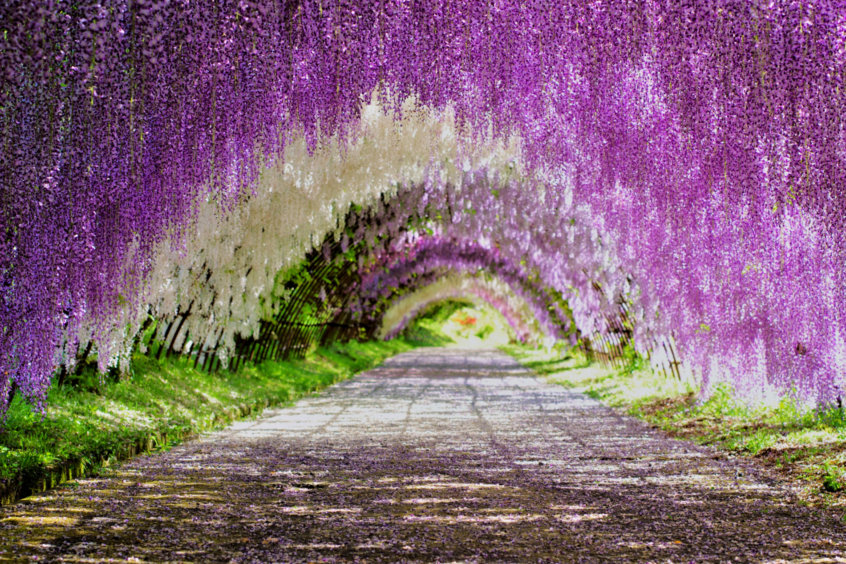 The end of cherry blossom season is certainly not the end of flower festivals in Japan! Every year, following the cherry blossoms, lush purple wisteria flowers arrive in Japan, blooming from April to May. The beautiful purple flowers are called fuji (ふじ, 藤) in Japanese. Here are the Top 10 wisteria-viewing spots in Japan! 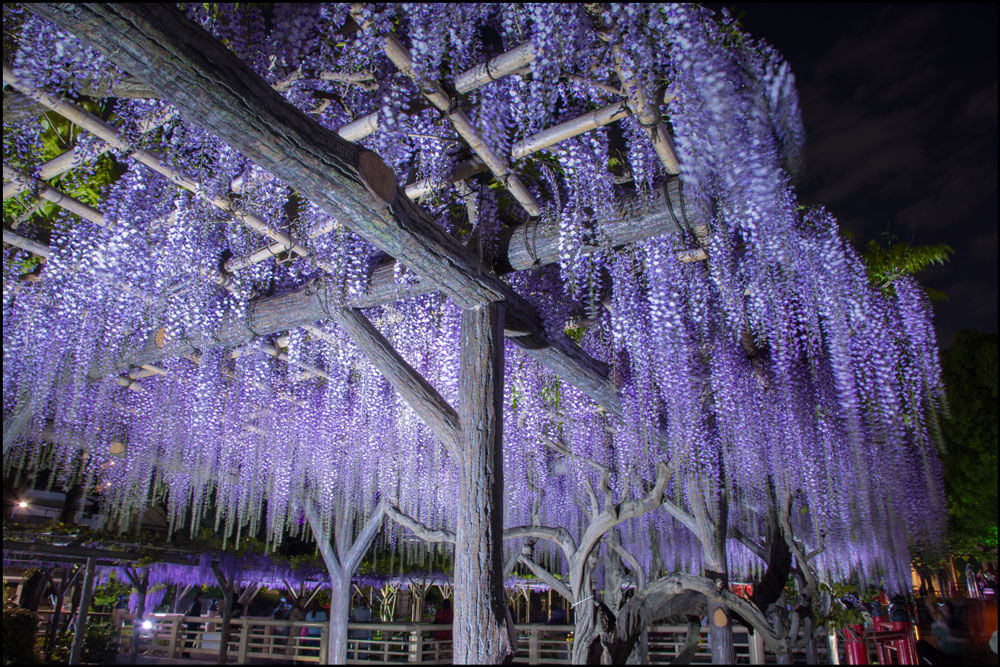 Located near Tokyo Sky Tree, Kameido Tenjin is a historic shrine where visitors can enjoy this purple flower. Wisteria have been growing at the shrine ever since the shrine was first established over 350 years ago, and today, there are 15 trellises of over 100 varieties. Along with the wisteria viewing, the annual wisteria festival features tea ceremonies and ikebana displays, as well as close to 100 food stands where visitors can enjoy the local street foods of the the shitamachi (old town area). 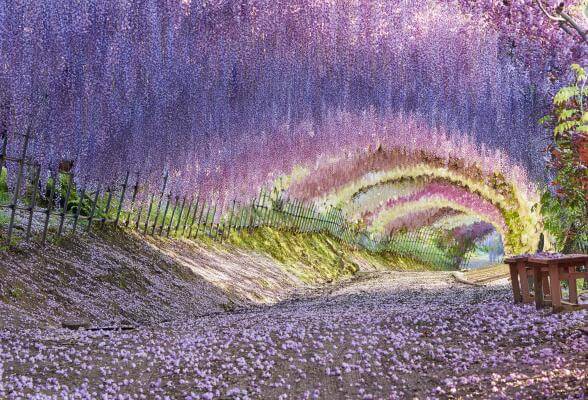 Kawachi Fuji-en Garden is widely regarded to be one of Japan’s top wisteria-viewing spots. Approximately 150 trees of 22 differing kinds of wisteria grow here, and they come in all kinds of colors. The 10,000-square-meter grande also has  a 220-meter long wisteria “tunnel” in which the flowers grow overhead on rounded trellises. Since Kawachi Fuji-en is a private garden, visitors are only allowed entrance during spring and fall (for viewing the autumn leaves). The entrance fees for wisteria viewing varies between 1,500 yen (during full bloom) to free admission (end of season). Note: due to overcrowding, visits to the gardens during peak season must first be reserved online here. 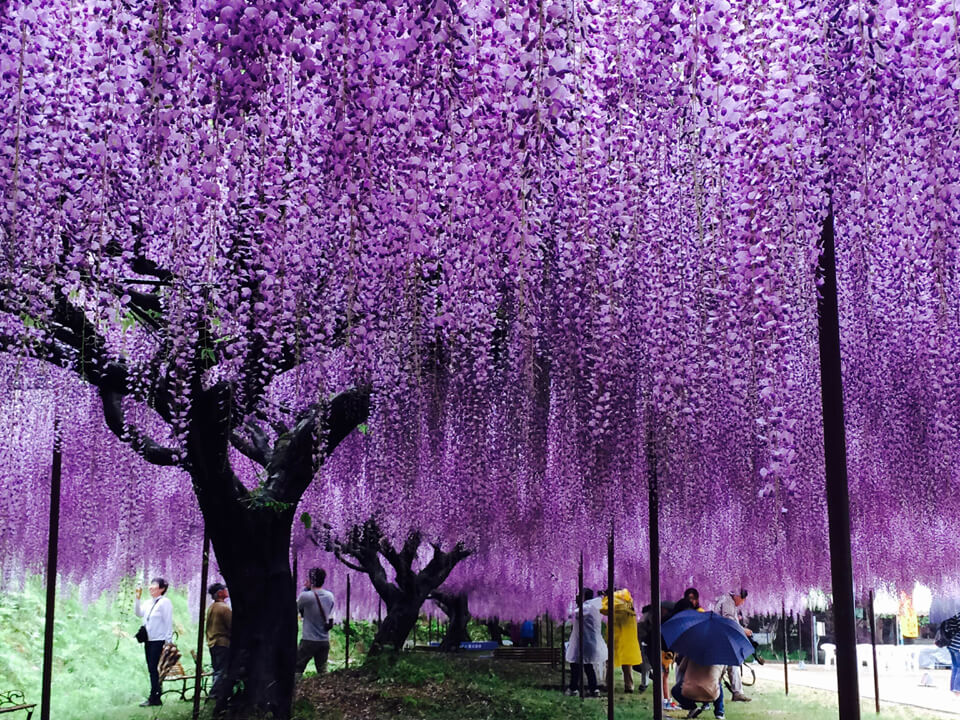 Built in 705, Byakugou-ji is a historic Buddhist temple located in Tamba City, Hyogo Prefecture. The wisteria here blooms in very long clusters that almost reach down to the ground. The beautiful hanging flowers can be found all around the temple grounds. A unique wisteria festival is held here every year near mid-May, featuring local goods and even mochi-pounding. We visited last year and did a Facebook live! 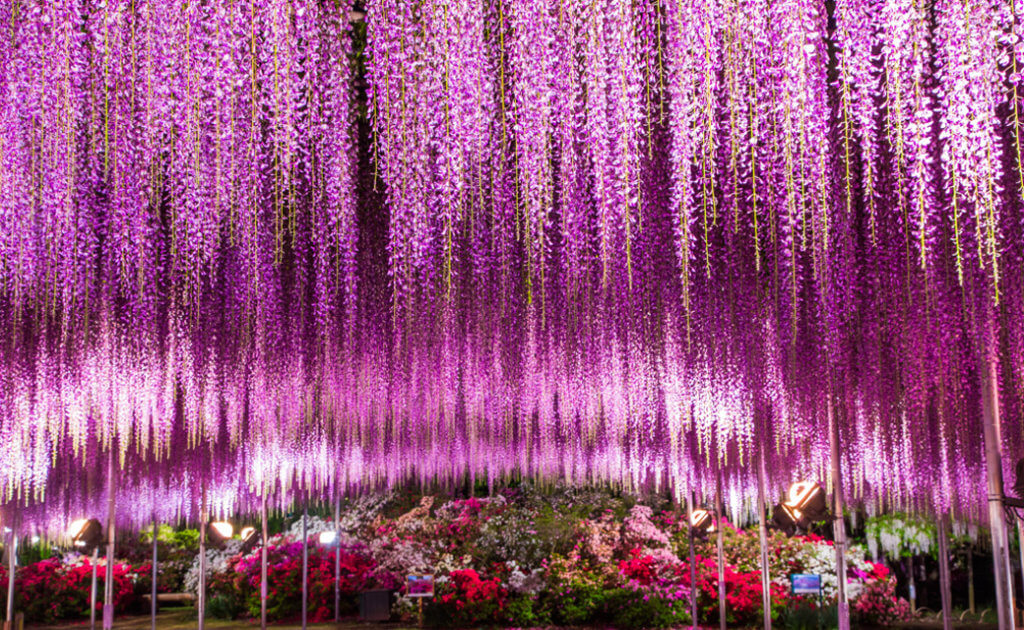 This flower park in Tochigi Prefecture was among the top ten international travel destinations selected by CNN in 2014. The wisteria here are more than 150 years old, and there are close to 200 wisteria trees in the park grounds. The wisteria comes in all varieties and colors, including pink, purple, white and yellow. One of the popular attractions of Ashikaga Flower Park is the 80-meter long white wisteria tunnel. During the peak blooming season and wisteria festival period, there is also a light-up at night until 9pm. 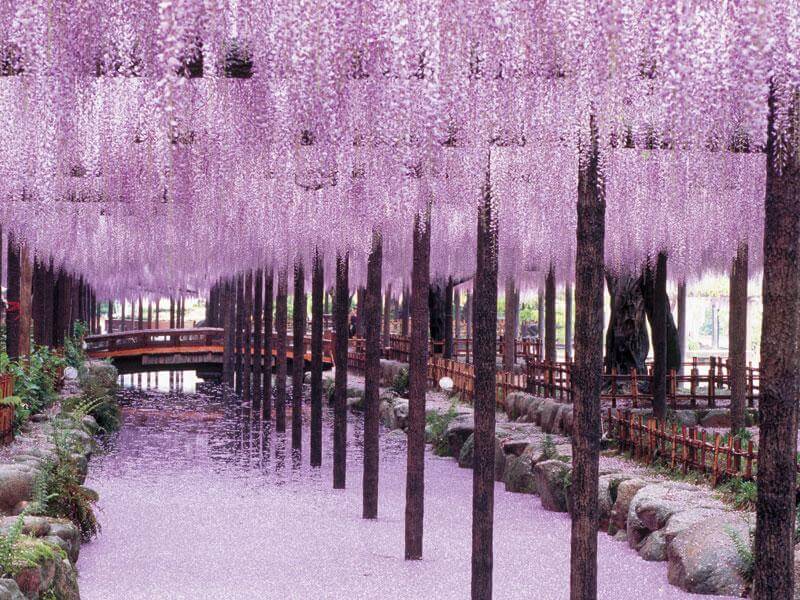 Tennogawa Park is located around Maruike pond, a collection of water that remains from the Tenno River. This is an especially photogenic location, as when the wisteria bloom all around the park, the purple hanging flowers are reflected on the surface of the water. Every year from late April to early May, the Owari Tsushima Wisteria Festival is held here. During the festival period, there is food, games, and entertainment throughout Tennogawa Park. 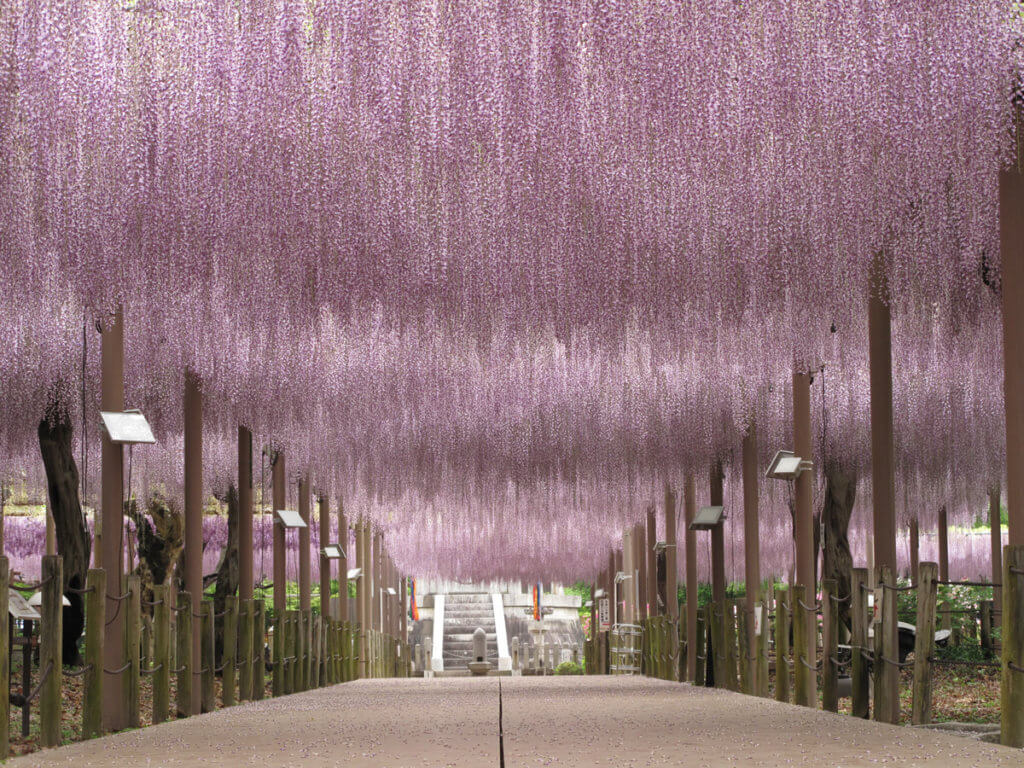 Every year, Mandaraji Temple and its park host Konan City’s Wisteria Festival from the middle of April to the beginning of May. There are a number of traditional events held during the festival, but most people come to see the beautiful wisteria in full bloom. There are about 60 wisteria trees draped on wisteria pergolas which are set up throughout the park. There is a variety of colors on the display, ranging from purple to red, and even white. 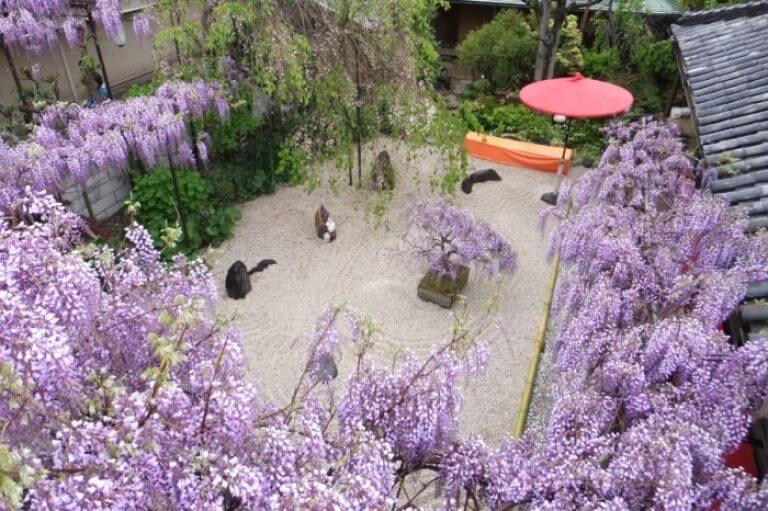 If you’re looking for a hidden gem viewing spot, there is a locally famous wisteria garden in Sennan City, Osaka Prefecture. It is actually in the former home of a now-deceased town resident, Masahiro Kajimoto. There is actually a bit of a story behind this wisteria location: In order to let his neighbors and the public enjoy his garden, Mr. Kajimoto began opening his home every year in the spring, which turned into a popular local wisteria festival. After his passing, locals stepped in to help preserve the garden, allowing the public to continue enjoying the festival. 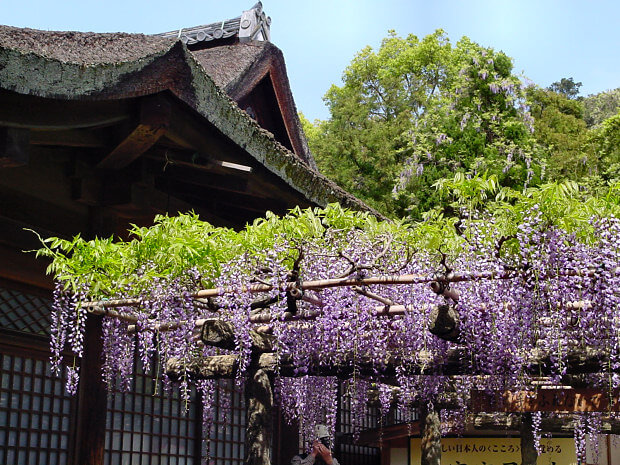 The Kasuga Taisha Shrine, along with the nearby garden, the Kasuga Taisha Shinen Manyo Botanical Garden, make up an area of over 30,000 square meters. Apart from over 300 varieties of plants, the garden also contains a special type of wisteria that measures over 1 meter long. These are called “sand grazing” wisteria because they hang all the way down to the sandy ground below. The flowers and plants of this shrine and garden were actually described in the Manyoshu, Japan’s oldest collection of poems, which date back to the Nara Period (AD 710-794). 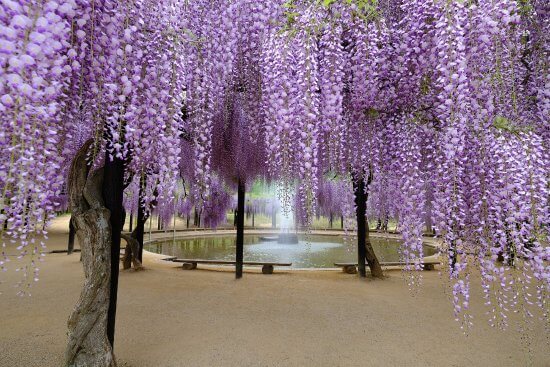 Shirai Omachi Fuji Park is one of the most well-known wisteria parks in western Japan. The park is a vast area of 7,000 square meters that is home to wisteria with a total length of 500 meters. One of the wisteria plants in particular has a very long clusters which are up to 1 meter 45cm in length. The wisteria here blooms every Spring from late April to mid-May, and during the wisteria’s blooming season, special products are also on sale in the park grounds. 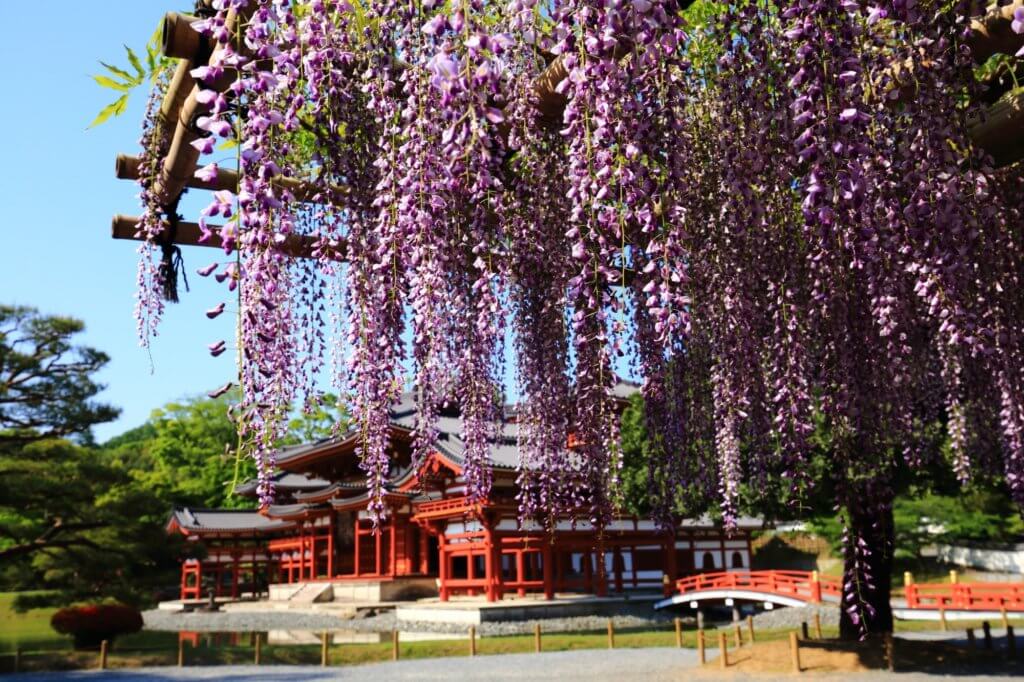 Byōdō-in is a Buddhist temple in Uji City, Kyoto Prefecture that was built in the late Heian period (794-1185). The temple sits along the Uji River and therefore has beautiful views of the water. In 1994, UNESCO listed the building as a World Heritage Site. Not only is it a famous temple, but Byōdō-in is a also well-known spot for wisteria flowers. Every spring, both tourists and Japanese people alike visit the temple to see the beautiful wisteria flowers in their full bloom.
Best time: Late April – early May
English Website

Plan on Visiting Japan in the future?