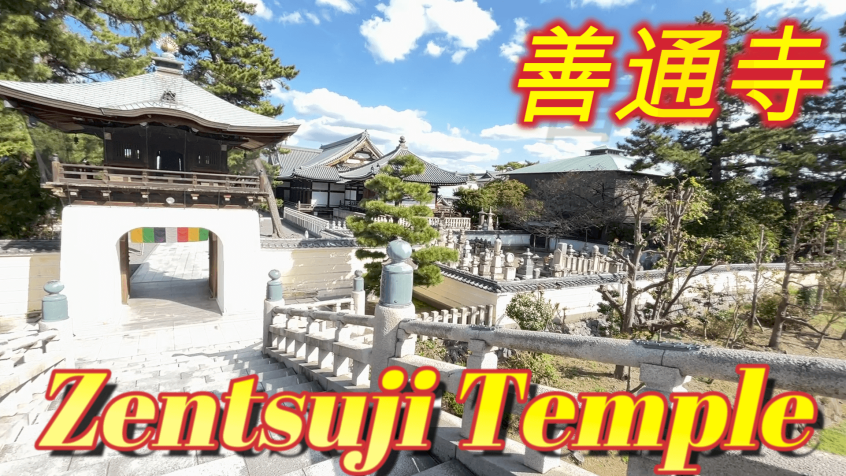 If you are looking for a calming place in the Japanese countryside, this is the place to be. Located in the western part of Kagawa Prefecture in Shikoku, the head temple of the Zentsuji School of Shingon Buddhism is the birthplace of Kukai (Kōbō Daishi) and is widely known as one of the three great spiritual sites of Kobo Daishi along with Toji Temple and Koyasan. This time I visited Zentsuji Temple, which is also the 75th temple of the 88 sacred places on Shikoku Island.

While Tōji Temple is located in the middle of the city of Kyoto and Kōyasan is a sacred site on an entire mountain with vast grounds in Wakayama Prefecture, Zentsuji Temple here is a magnificent temple surrounded by the rich nature of Kagawa. It has a rustic appearance that blends in with the area and gives a sense of calm. Zentsuji Temple is said to be the first fundamental center of the Shingon sect of Buddhism (Konpon dōjō), built over a period of six years from 807 by Kobo Daishi, who returned from Tang Dynasty China to mourn the loss of his ancestors. 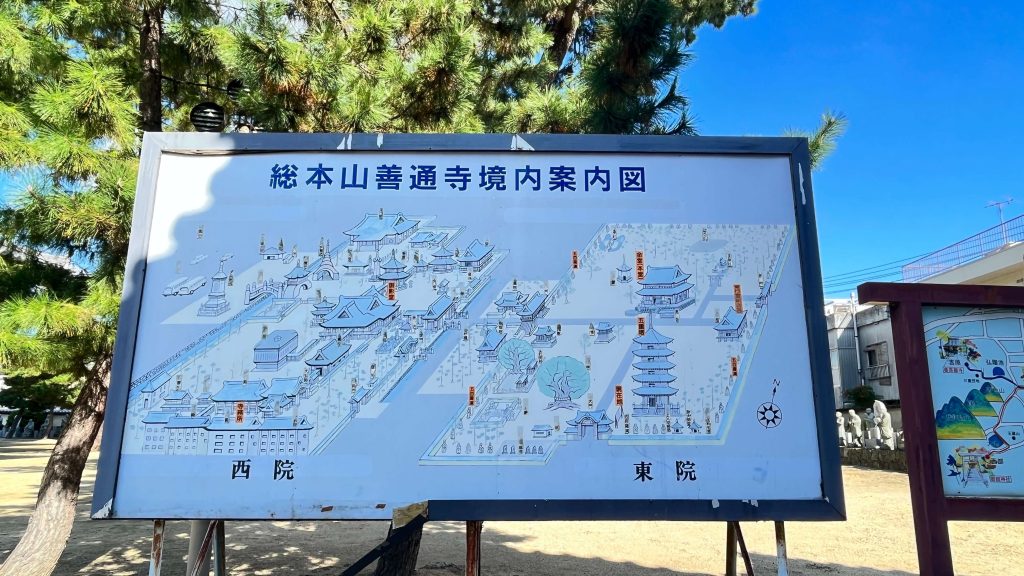 The vast temple grounds, covering a total area of approximately 45,000 square meters, are divided into two sections: the East Wing, called “Garan”, and the West Wing, called “Tanjō-in”. The “Garan,” with its Kondō hall, five-story pagoda, and other structures, has been part of the temple since its founding, while the “Tanjō-in,” centering on the Mieidō hall, is the site of the Saeki family residence where Kobo-Daishi was born, and both have a connection to Kobo-Daishi’s birthplace.

The Tōin “Garan” with its Kondō hall, five-story pagoda, and other buildings is the original Zentsuji Temple, which was built by the Kōbō Daishi himself. At the time of construction, there were 15 halls and towers, including Kondō, Daitō, Kōdō, and Hokkedō, but in 1558, a military fire completely destroyed the original buildings, which had existed for approximately 750 years. 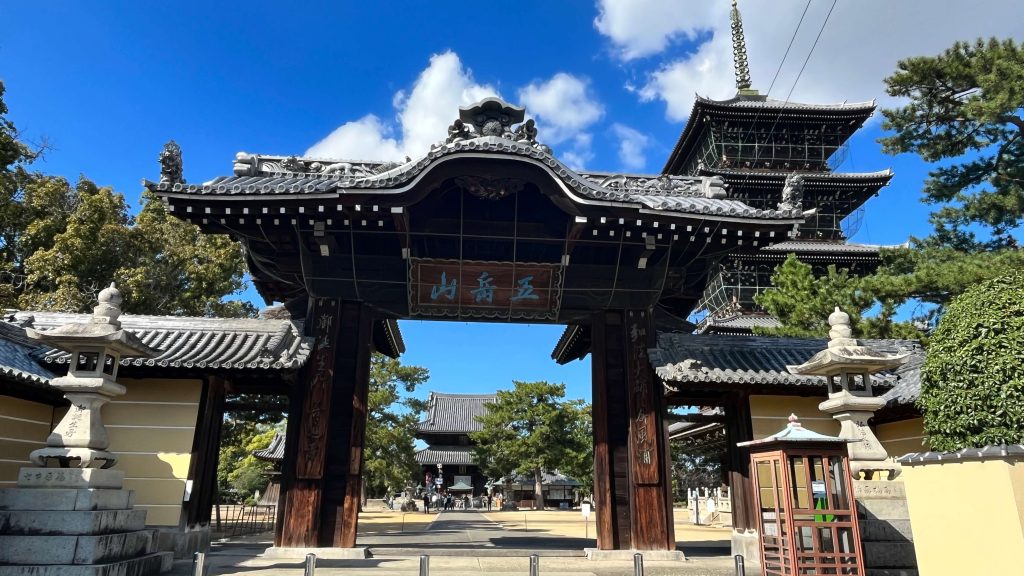 The temple name Zentsuji was taken from his father’s real name, Yoshimichi. The official name of Zentsuji Temple is “Byōbuura Gogakusan Tanjō-in Zentsūji”. The name “Byoubu Ura Gogakuzan” comes from the five peaks that rise to the west of the temple. 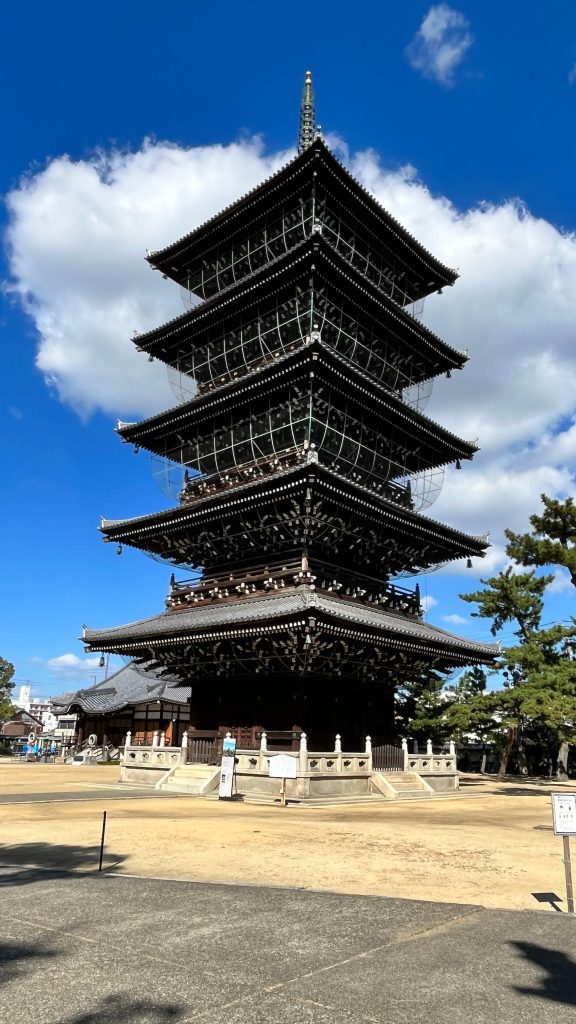 It is a large zelkova tower, 45 meters high, and is widely known as the symbol of Zentsuji Temple. Since its construction, the pagoda has been destroyed by winds and fires, and has been rebuilt each time. The current pagoda was rebuilt in 1845 and completed in 1902. 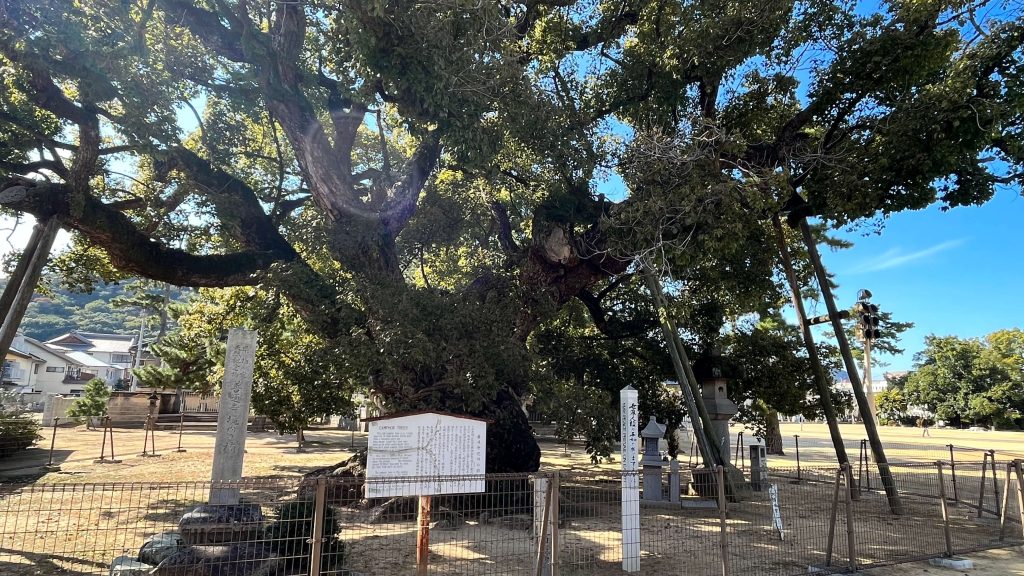 There are two giant camphor trees in the precincts of Zentsuji Temple. This one is 30 meters tall, with a trunk circumference of 11 meters at breast height, and branches stretching 24 meters east to west and 29 meters north to south, and has been thriving since the birth of Kobo Daishi. 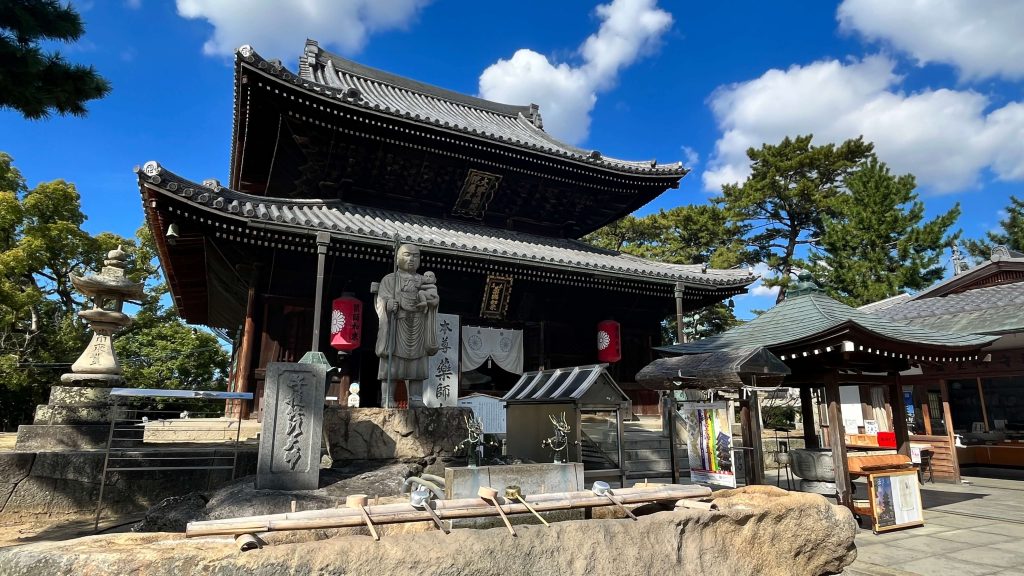 The main hall of Zentsuji Temple. The original Kondō (main hall) was destroyed by fire in 1558, and the present building was rebuilt in the Genroku era (1688-1704). The main statue of Yakushi Nyorai (the Medicine Buddha), a huge statue measuring 3 meters in height, was created in 1700. 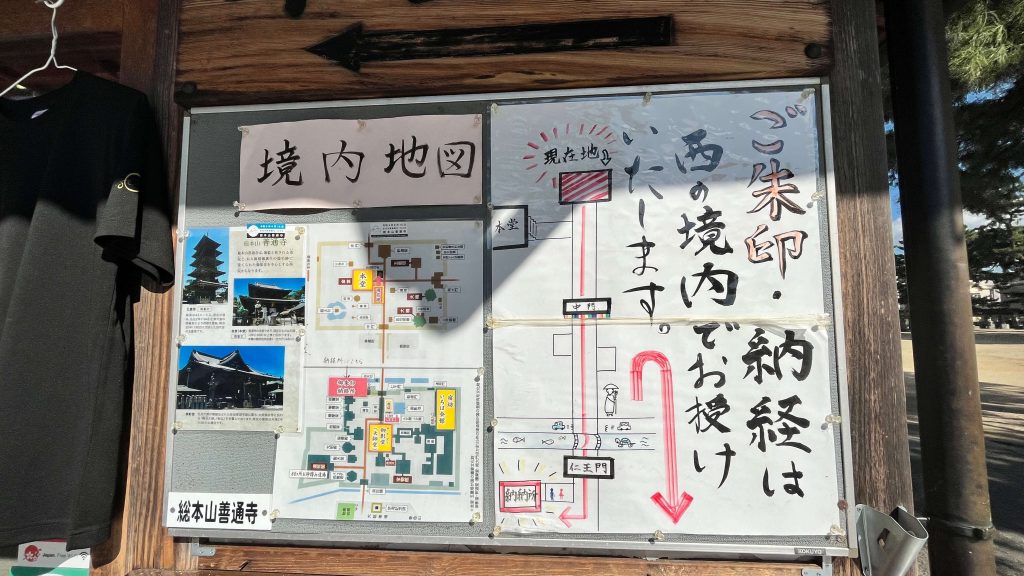 Notice board near the Hondo. It says “Goshuin and sutra payments are accepted at the west precinct. 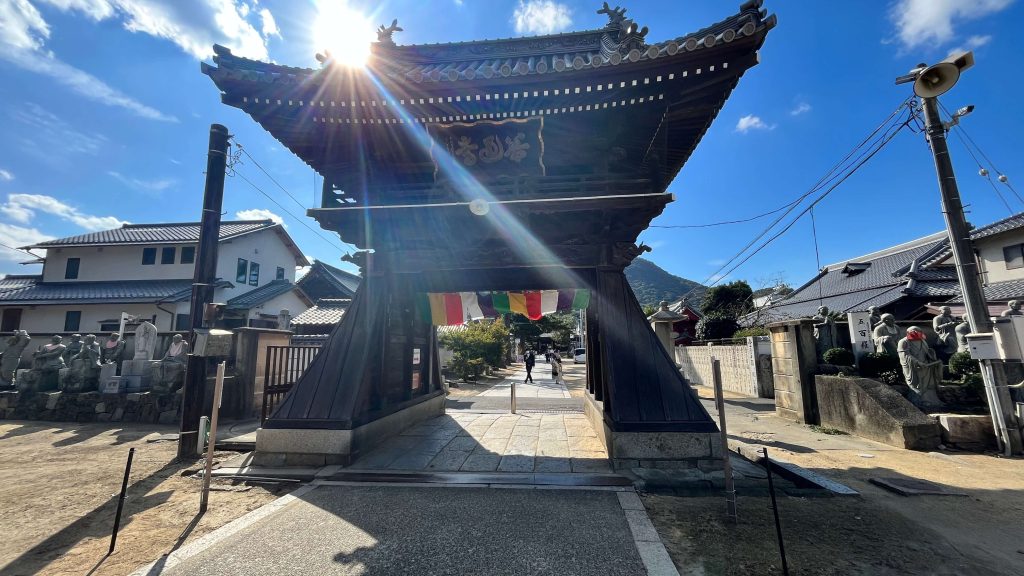 Niōmon Gate is the main gate of the Seiin, with statues of Kongōrikishi standing on both sides of the outer gate, and a large sandal dedicated to the deity on the inner side. The bridge in front of the gate is called Hatsuka-bashi (廿日橋), because in the past it was only open to traffic on the 20th day of each month. (“Hatsuka” means 20th day of the month in Japanese) 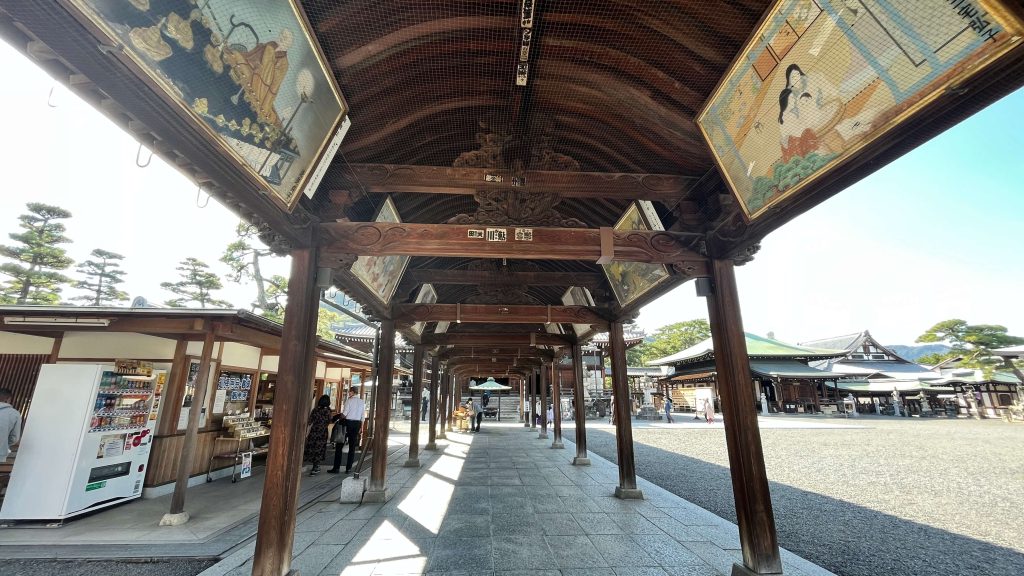 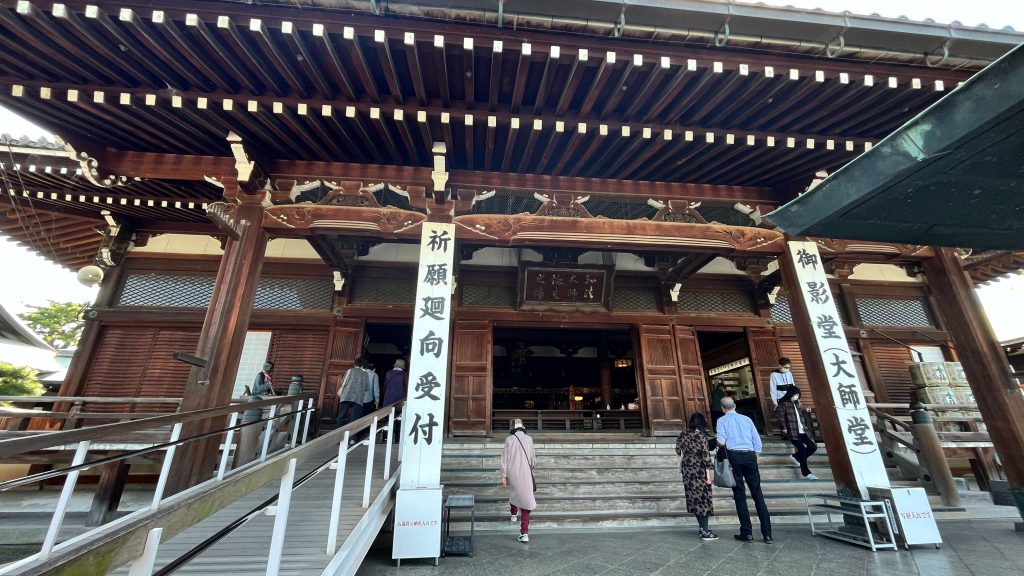 Kobo-Daishi was born in 774 at the site where the Mieidō stands (the former residence of the Saeki family). In the inner sanctuary, there is a statue of Shunmoku Daishi, the principal image of the temple, which is said to have been created by Daishi himself. The current building was erected in 1831 and renovated in 1936.

Under the floor of the Mieidō Hall, there is a “Kaidan Meguri” (pilgrimage to the sacred place where Kobo-Daishi was born), in which visitors walk through a completely unlit area to pay homage to the holy place. Once down in the basement, visitors walk about 100 meters in total darkness, without a single candle light, chanting “Namu Daishi Henshō Kongō” as they walk along the wall with their left hand, and their accumulated sins will be erased. 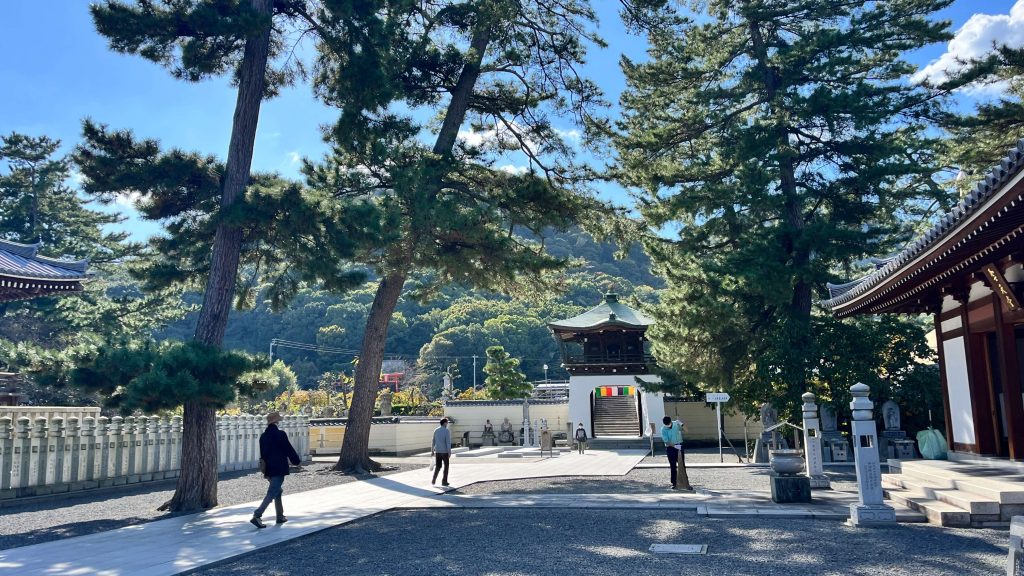 The gate at the back is the Shōgakumon gate, and beyond it is the Saisei Bridge, which leads to the parking lot.

The precincts of the temple were very clean and pleasant. It’s a very ideal place to calm your mind in the Japanese countryside.