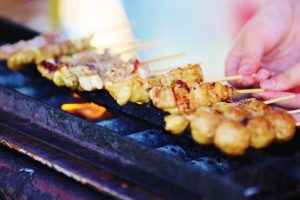 Here is your ultimate guide to decoding Japanese food terms and figuring out what exactly you’re eating!

As you learn more about Japanese food, you’ll notice that many of the foods have similar words in their names, such as okonomiyaki, takoyaki, and yakitori. Learning the meaning of these prefixes and suffixes mean can help you figure out what’s on your plate (or in your bowl).

The term “yaki” can be found at either the beginning or the end of a word. This term comes out in many popular Japanese dishes, including yakisoba, takoyaki, yakiniku, and even desserts like taiyaki. “Yaki” refers to the cooking technique of grilling or frying something, typically on or in an iron pan. Yakisoba is just soba noodles that have been grilled on an iron pan, and taiyaki is a dessert made of sweet batter that is cooked in a fish-shaped iron mould. 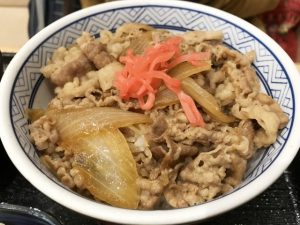 When you see this word at the end of your dish, it typically means you are in for a rice meal. “Don” comes from the word “donburi”/”domburi” which means rice bowl or rice bowl dish. Foods with “don” in their name start with a rice base, followed by a wide variety of toppings depending on the dish. For example, gyudon is a bowl of rice topped with beef, and katsudon is a bowl of rice topped with tonkatsu (deep-fried port cutlet), eggs, and vegetables. 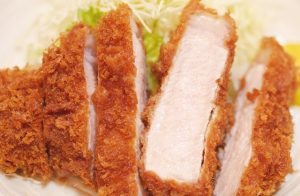 Speaking of tonkatsu, “katsu” is another incredibly common term you’ll find in the names of Japanese dishes. “Katsu” refers to “cutlet”, typically a pork cutlet, and is something that is pressed together into a flat shape, then covered in bread crumbs and fried. Fun fact – Japanese students often eat katsu before an exam, because “katsu” is also the Japanese word for “to win” or “to triumph”. 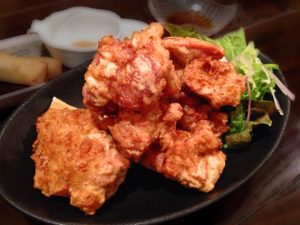 “Karaage”, or “age” for short, refers to a technique where different foods, most commonly chicken, are deep-fried. Before frying, the pieces of meat are typically marinated in a mix of soy sauce, garlic, and ginger, giving it a unique and wonderful flavor. The most common example of karaage is Japanese fried chicken, but “age” is commonly found in other fried foods, such as agedashi tofu, which is tofu that is deep-fried in dashi (fish broth). 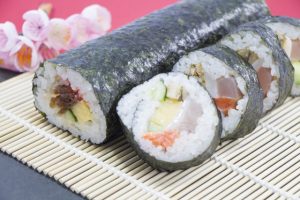 This is the Japanese word for “roll,” and it appears in a large variety of foods as well. Harumaki are spring rolls – literally haru (spring) and maki (roll). Makizushi refers to sushi rolls. As you can see, it is a very useful word to know! Furthermore, “maki” is found in non-food words as well, such as tatchimaki (tornado).

For more daily posts on Japanese food and culture, check out our Facebook page!