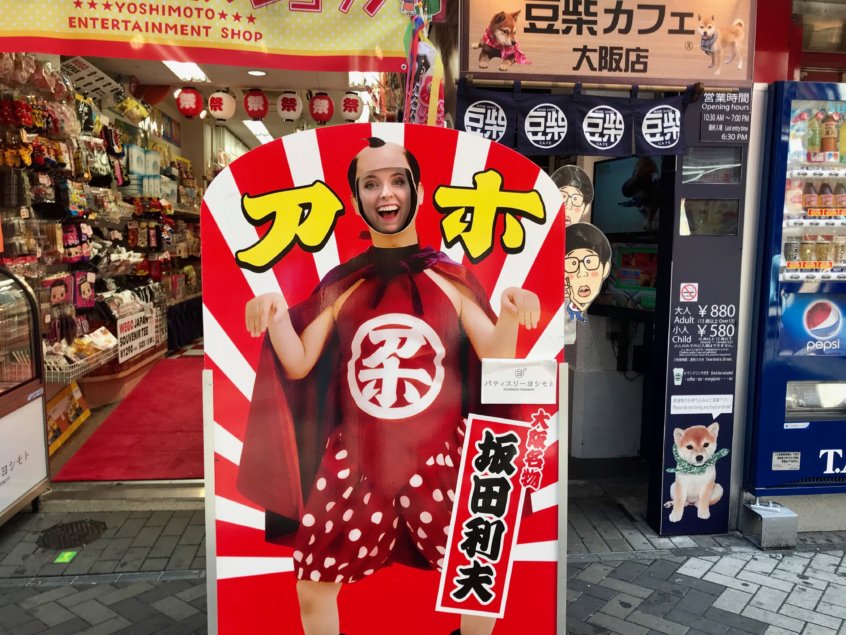 Located in the South part of Osaka City, Namba is a popular area for shopping, restaurants, night life, with even a few well-preserved historic shrines and alleys. Here are the must-see spots in Namba!

Namba (なんば) is Osaka City’s most famous entertainment district, and is packed with endless dining and shopping choices. The area is quite convenient to travel to, as it is has three train stations, three subway lines, and a bus terminal. The area surrounding Namba Station is minami (南, “South”) Osaka,  one of Osaka’s two major city centers. The other major city center is kita (北, “North”) which is located around Osaka and Umeda Stations. 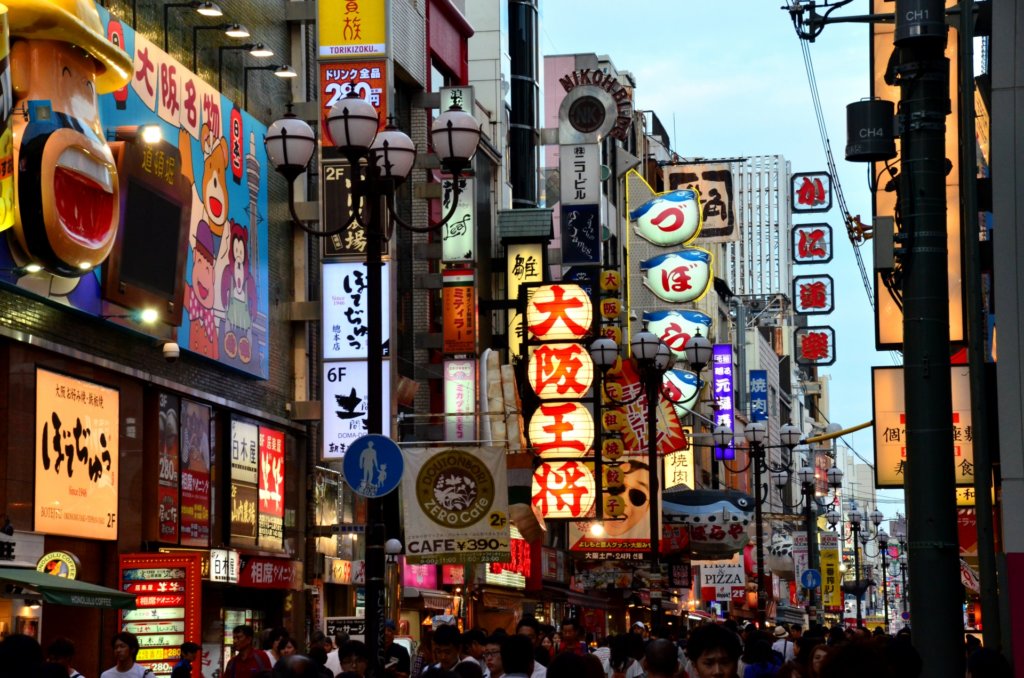 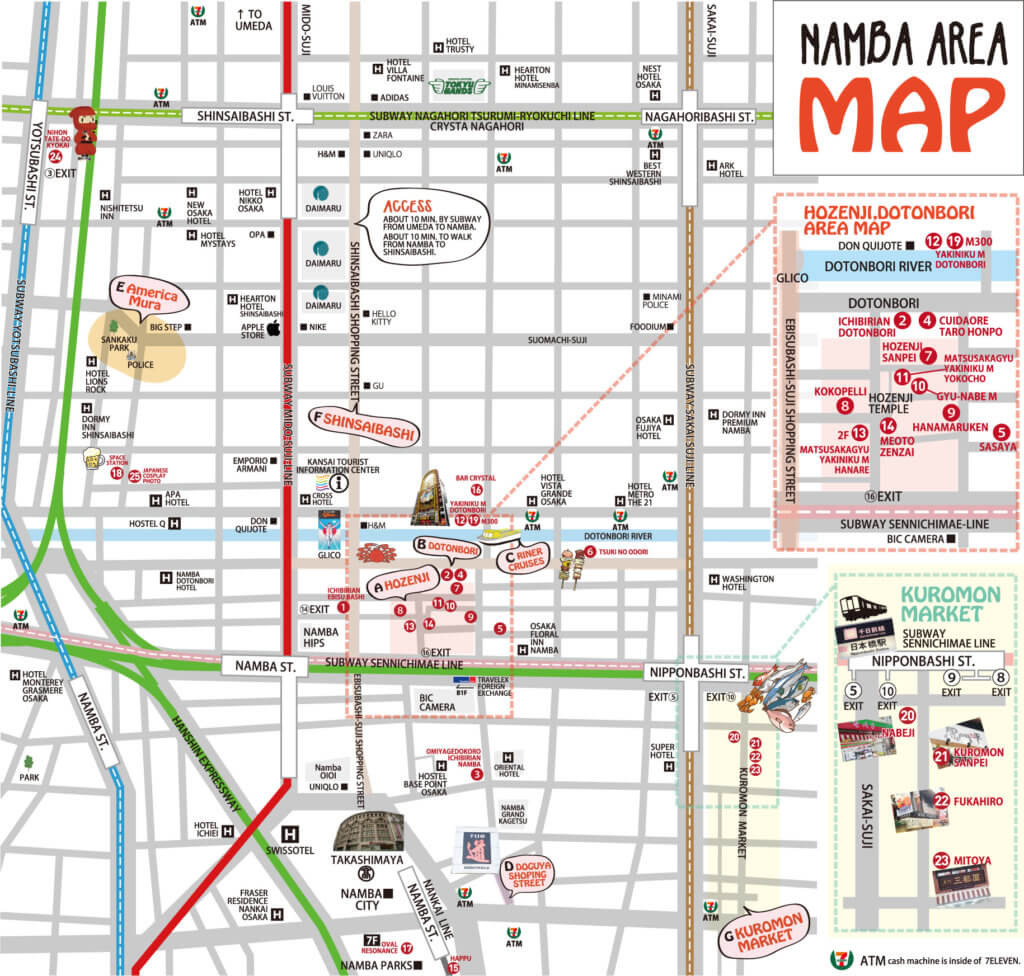 Dōtonbori (道頓堀) is one of Osaka’s most popular tourist destinations. The street shares the same name as the Dōtonbori canal, which it runs parallel to. Not only is Dōtonbori a popular shopping and entertainment district, but it is also known as a foodie’s paradise because of the abundant selection of restaurants and street food. At night, the street and canal are lit by hundreds of neon lights and signs, including the famous Glico Running Man sign, which has become a symbol of the area. 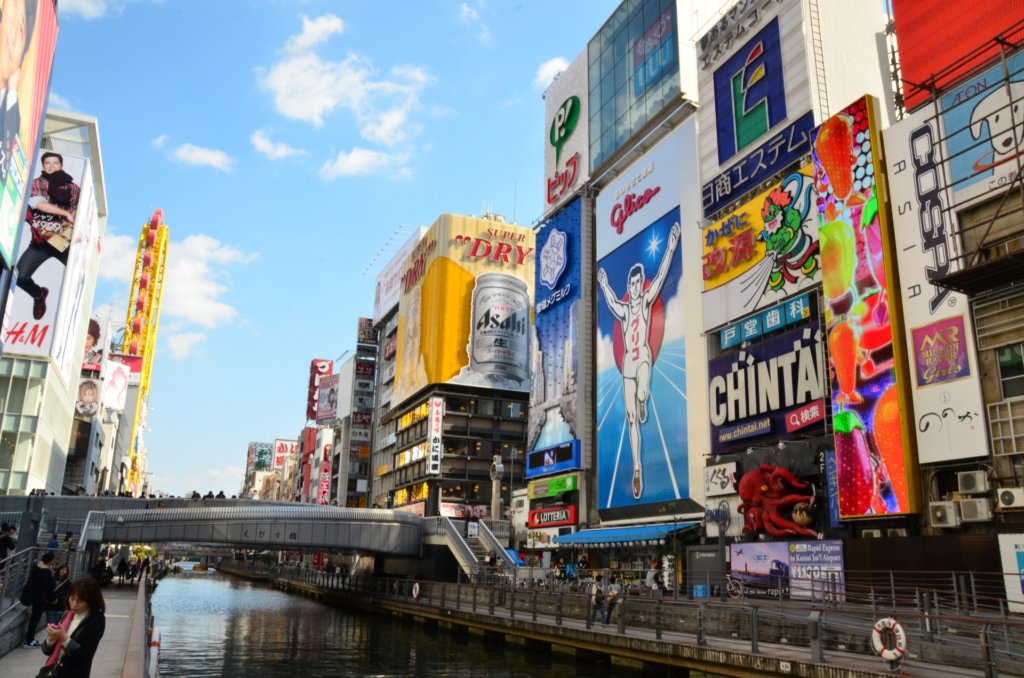 The bridge that crosses the canal is Ebisu-bashi, and it offers great views of the signs lining the canal. The view is especially nice at night, when everything lights up. Check out our 1-minute video guide to how to enjoy a night out in the Ebisu-bashi/Dōtonbori area:

The Shinsaibashi (心斎橋) area is just next to Namba area and by far the most popular shopping area in Osaka. The Shinsaibashi-suji shopping arcade is a 600-meter long covered street filled with a combination of brands to satisfy every kind of shopper: dollar stores, drug stores, chain retail stores, pop-up boutiques, high-end brands, and expensive department stores. There are also many famous restaurants and cafes here, including a KitKat store and Pablo, a fluffy cheesecake shop. You can easily walk around this area for a few hours and discover all kinds of shops. It’s the perfect place to grab a bite to eat and pick out a souvenir or two! 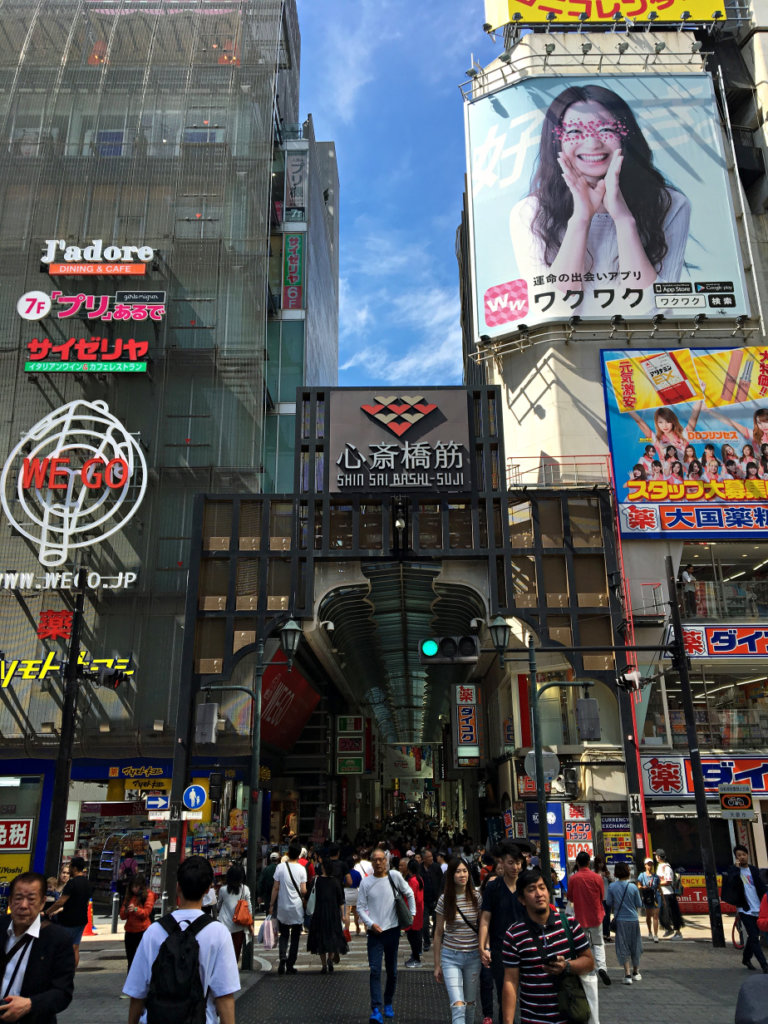 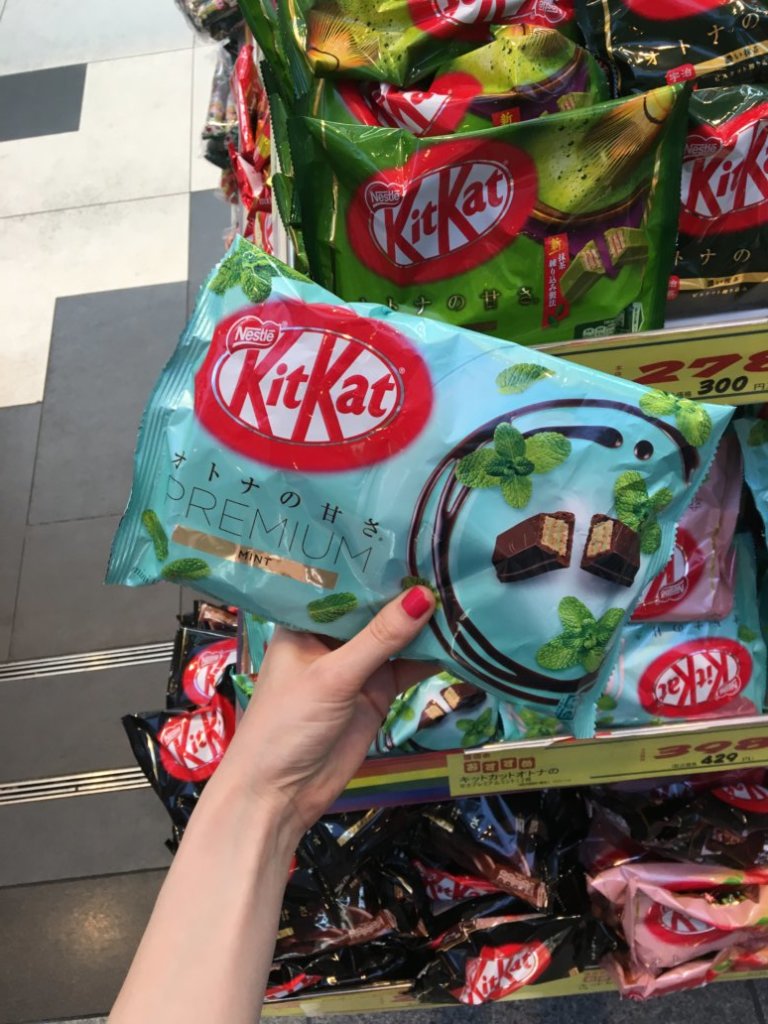 Namba Parks (なんばパークス) is a shopping and entertainment paradise! This popular shopping complex was designed with lots of greenery atop of unique modern architecture. It really sticks out among the rest of Osaka’s urban landscape. Namba Parks is made up of a shopping mall with 120 shops, a movie theater, an amphitheater, and a lush rooftop garden. It also has a number of restaurants too, as the entire 6th floor is dedicated to dining, and has a variety of Japanese, Korean, Vietnamese, and even Italian restaurants. Plus, being so close to the Namba Station makes Namba Parks an incredibly convenient and essential part to any visit to Namba! 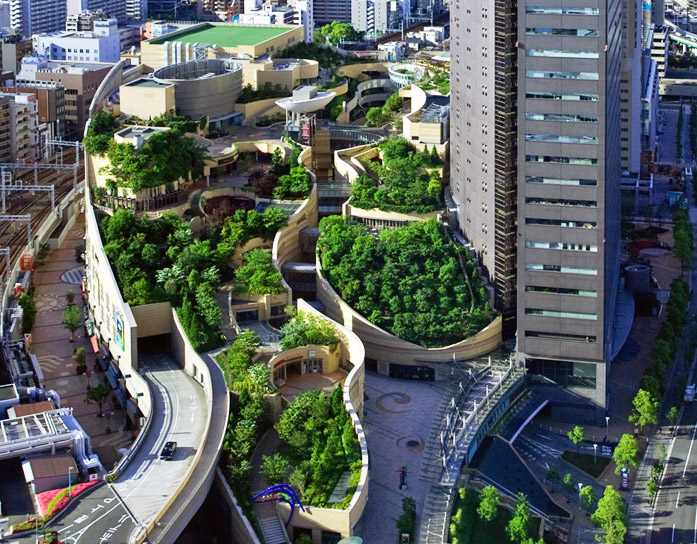 Hōzenji Yokochō (法善寺横丁) is an alley tucked away in Namba that contains Hōzenji Temple (法善寺). The name “Hōzenji Yokochō” literally means “the alley next to the Hōzenji Temple”. The 80-meter-long alley has remained relatively untouched over the years, and therefore still has an old-time atmosphere similar to that of Kyoto’s famous Pontocho Alley.

After passing through the alley’s narrow 2.7 meter-wide entrance, you will find 60 traditional restaurants and taverns to choose from. Unlike most yokochō alleys, which typically have more casual eateries, the restaurants and izakayas here are surprisingly high-end. Hōzenji Yokochō has many excellent restaurants serving Osaka’s specialties.

Follow the stone path until you reach the famous temple the alley gets its name from. It’s easy to spot the torii gate and the many hanging lanterns. At night, the stone-paved pathway and the numerous lanterns around the small temple create a very magical atmosphere! 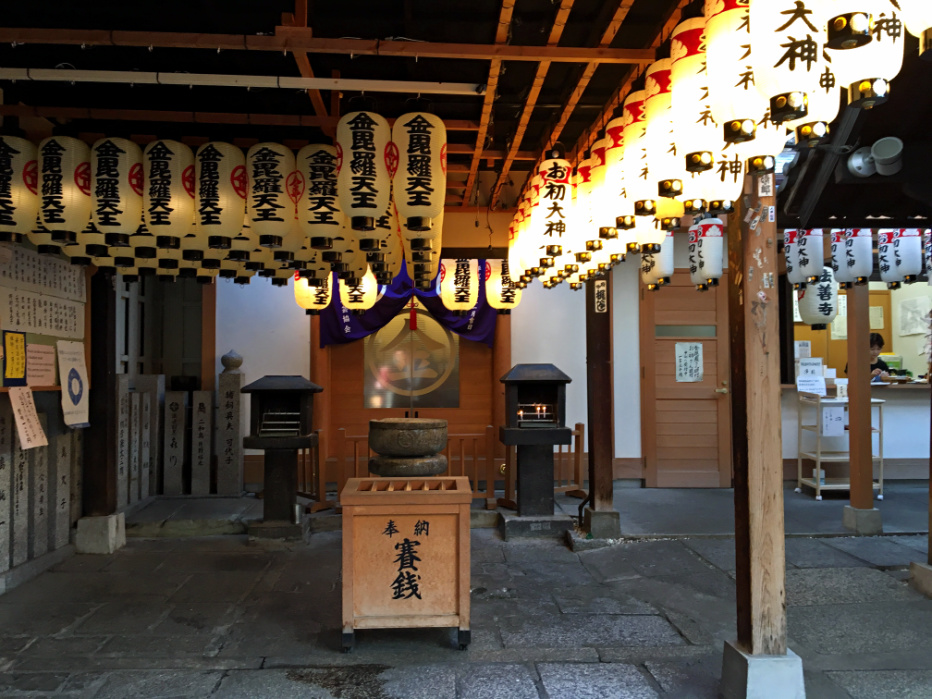 There is also a famous moss-covered Buddhist statue on the temple’s grounds. Interestingly enough, this statue was the only thing that survived the bombings during war. According to a famous story, an elderly woman made a wish by throwing water on the statue and her wish came true. Since then, it has become custom for people visiting Hozenji Temple to stop at the statue, make a wish, and throw some water on it. This results in the statue being permanently covered in moss year-round. Ironically, the statue was meant to be scary so that people would be “scared into enlightenment”, but the green mossy coverage makes it look quite soft and gentle, and hides its angry face. 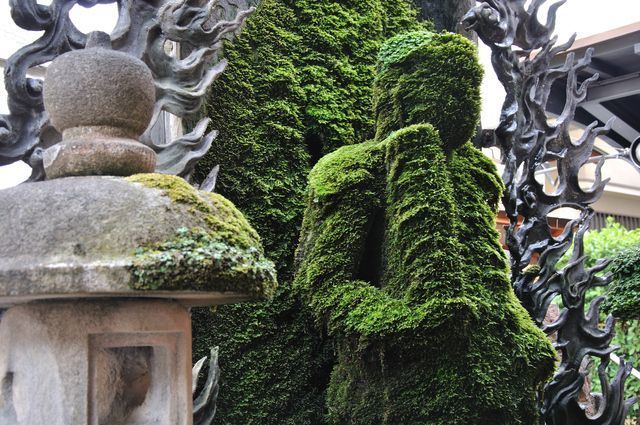 Namba Yasaka Shrine is another hidden gem of the area, and is just an easy 8-minute walk from Namba’s Nankai station. The Namba Yasaka shrine (なんば八坂神社) was one part of an entire complex of Buddhist temples that were burned down in wartime air raids. As the home of the Namba’s guardian deity, Namba Yasaka is famous for its massive lion head stage, which stands out  plainly among its surroundings. 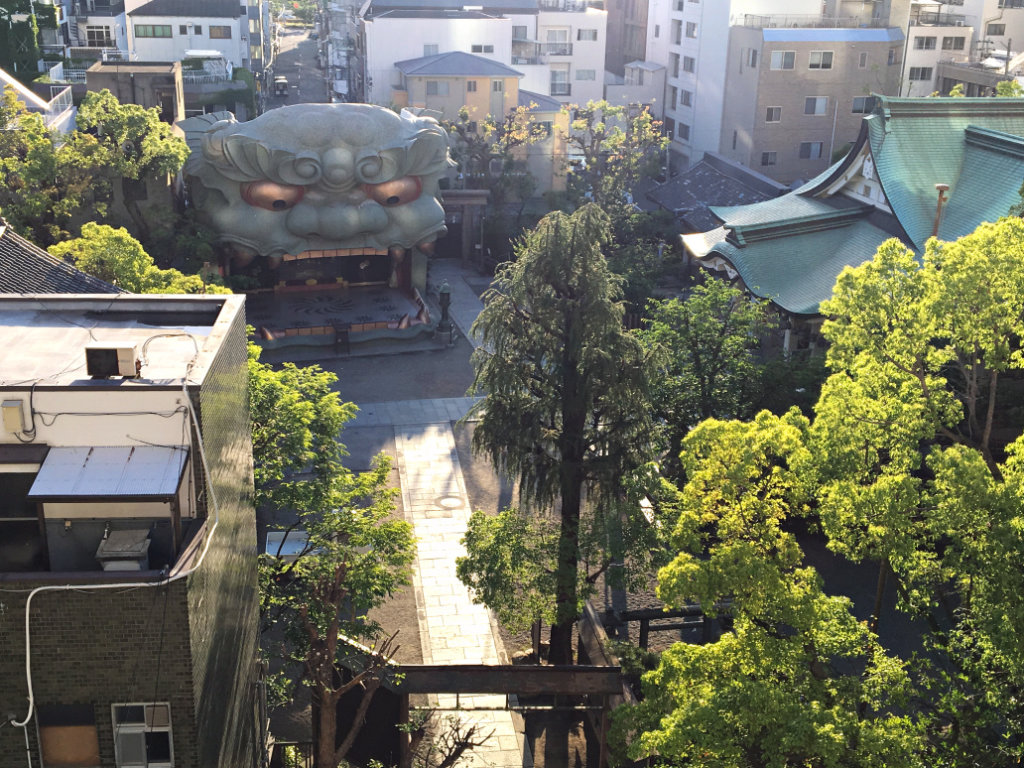 Though it looks as if it dates back much earlier, the lion’s head stage was actually built in 1975. It stands 12 meters tall and 7 meters deep. It is said that the huge lion’s mouth swallows evil spirits and thus brings good luck, especially for people who are hoping to succeed in school or business. Because of this, many people visit the shrine during exam time or at the start and end of the financial year. 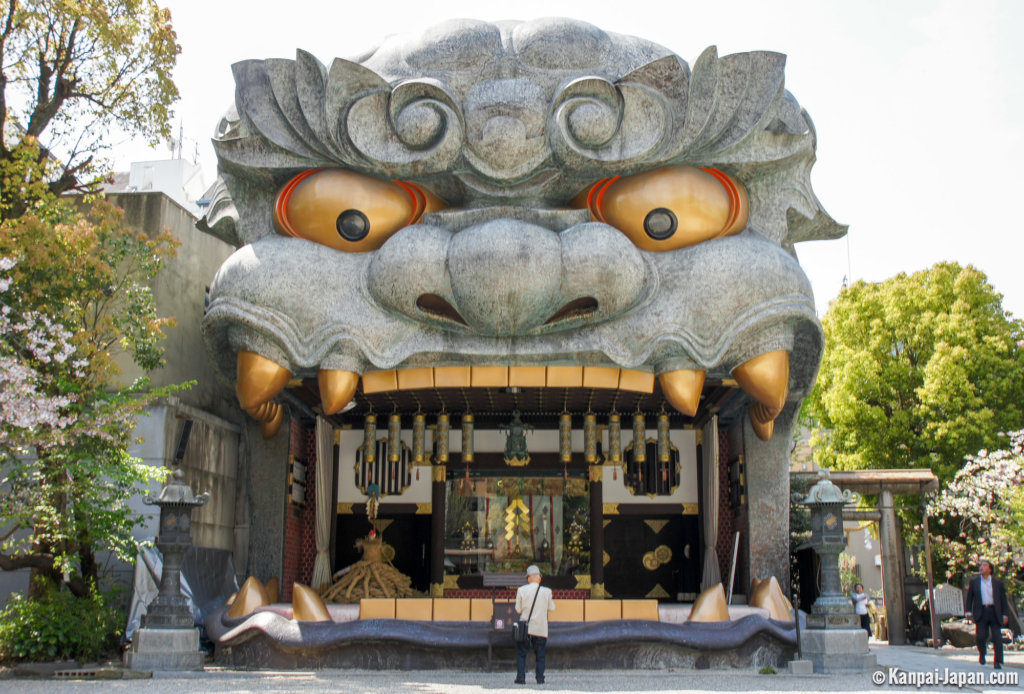 Every year on January 14th, Namba Yasaka Shrine holds its annual festival, which features a huge tug-of-war competition. This is done in reference to the myth that the shrine’s deity once killed a giant snake and brought peace to the people the Namba area. The ritual is Osaka city’s first designated intangible folk cultural property.

The shrine also has a summer festival every year on July 13th and 14th, when a lively parade of mikoshi and taiko floats are carried through Sennichimae, Dōtonbori, and Ebisusuji. Its is a very fun time to visit Namba!

We recently went to Namba, walked from Hōzenji yokochō to Ebisubashi bridge, checking out many of these places in person. Watch our Facebook live below: