If you’re fascinated by the atmosphere of old Japan, then Gion is the place for you. Gion (祇園) is Kyoto’s famous Geisha district, as well as the home of the large Gion Matsuri festival held every year in July. Here’s what to do when visiting Gion!

Gion is a historical district in the city of Kyoto that is filled with shops, restaurants and ochaya (お茶屋, Japanese teahouses). Gion is famous for being one of the few remaining places in Japan where geiko (芸妓, what “geisha” are called in the Kansai region) and maiko (舞妓, apprentice geiko/geishas) train to perform for guests.

Gion includes the area around Shijo Avenue between Yasaka Shrine in the east and the Kamo River in the west. The Yasaka Shrine was actually originally called Gion Shrine, and was an important pilgrimage spot. The entertainment area developed here to provide the many pilgrims with food and drink.

As kabuki theater grew in popularity, more high-end forms of entertainment were developed, leading to the rise of the geisha. Even today, Gion is known as Kyoto’s most famous geisha district. The district remains packed with bars, restaurants and traditional teahouses, and reaches its peak atmosphere in the early evening. After the sun goes down, street lanterns light up, and the apprentice geisha walk around the back alleys on their way to their various appointments.

Gion can be reached from Kyoto Station by bus 100 or 206, which cost 230 yen to get to Gion bus stop. The closest train stations are Gion Shijo Station on the Keihan Line and Kawaramachi Station on the Hankyu Line.

Shijo Avenue is a popular shopping area filled with stores selling local products. Called Shijo-dori in Japanese, the avenue runs through the center of the Gion district and connects the Kamo River to the Yasaka Shrine. If you’re walking through the Gion Area from Gion Shijo Station, heading down Shijo-dori is a good place to start.

On the corner of Shijo-dori and Kawabata-dori Street stands the Minamiza Kabuki Theater. As the name suggests, the theater is most famous for kabuki, but a variety of theatrical productions are put on here. Kabuki has thrived in Kyoto since the early 17th century, and the Minamiza was once one of seven grand kabuki theaters in Kyoto. The other six have disappeared over time, and only Minamiza still gives the performances today. Although a theater has stood on this exact corner since the early 1600s, the current building was built in 1929. 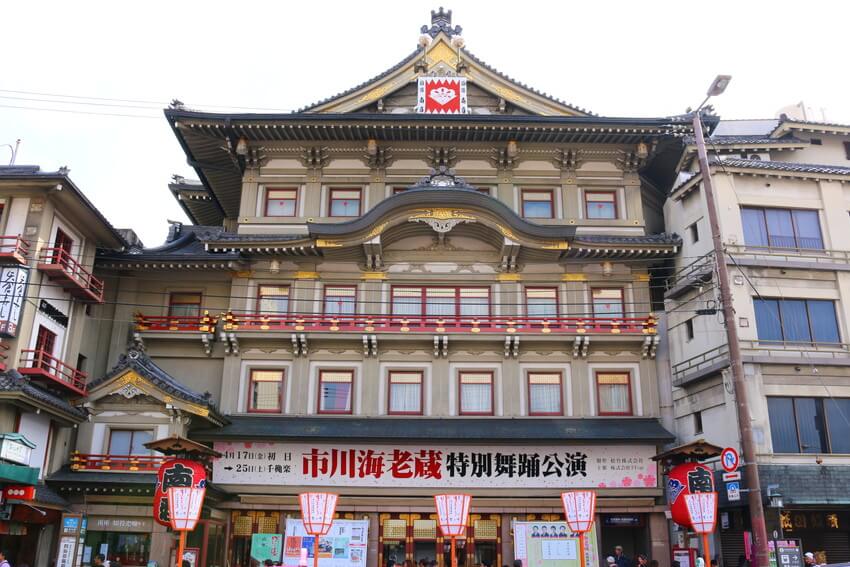 If you continue down Shijo-dori towards Yasaka Shrine, you can turn right onto Hanamikoji-dori. This street is famous in Kyoto as one of the best preserved streets in the entire city. Hanamikoji-dori is filled with traditional wooden machiya house cafes, sweets shops, traditional kaiseki restaurants and small boutiques. By far the most popular street in the Gion area, Hanamikoji Street is a nice (though expensive) place to dine. The street can admittedly be quite touristy, but still manages to hold onto the atmosphere that makes it so timeless. 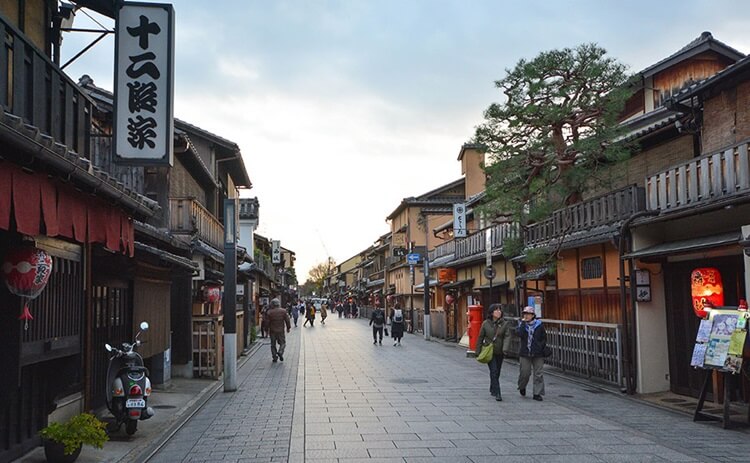 On the corner of Shijo-dori and Hanami-koji is a striking red teahouse called Ichiriki Chaya. Ichiriki Chaya has been one of the most esteemed establishments in Gion since it was first built over 300 years ago. The teahouse offers geisha entertainment to all kinds of powerful business owners and political figures – but strictly by invitation only.

This teahouse has a famous history of being incredibly exclusive. During the 19th century, revolutionary samurai warriors would meet here to plot the downfall of the shogun’s government. And in the 18th century, the Ichiriki teahouse played a major part in a legendary samurai vendetta.

Today, it continues to be an important part of Gion’s culture. 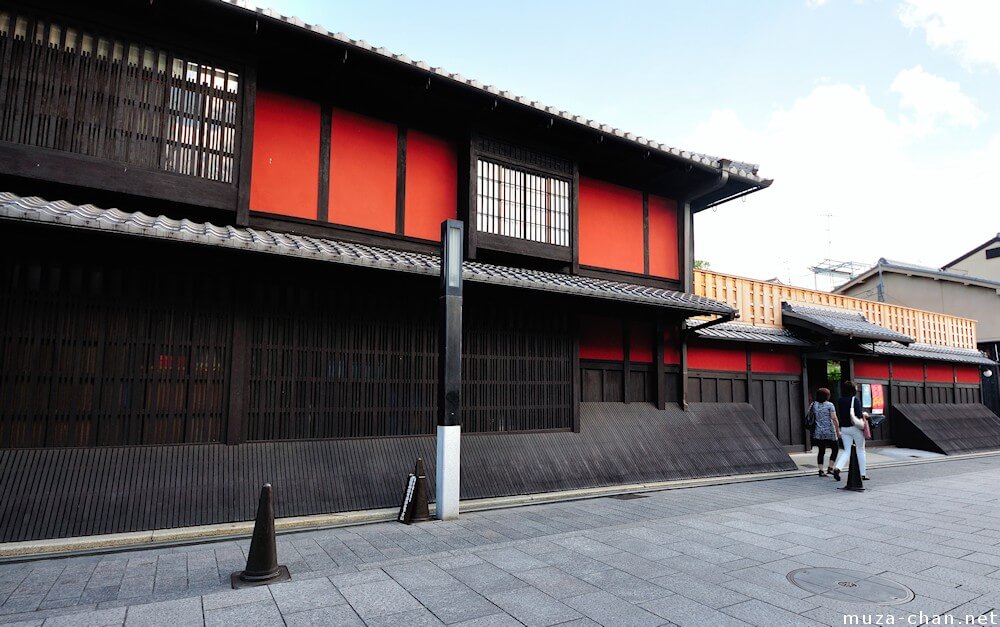 Not all establishment are so exclusive: farther down Hanamikoji at the end of there street is Gion Corner (ギオンコーナー), a well-known classical theater where a wide variety of Japanese traditional arts are performed. The cultural show that is held every day is actually aimed at foreign tourists. The show serves as an introduction to several traditional Japanese arts, and includes short performances of a tea ceremony, ikebana, bunraku music, Kyogen comical plays and even dances performed by real maiko. If you happen to visit Kyoto in April, be sure to check out the Miyako Odori (都をどり), which has daily dance performances by maiko. 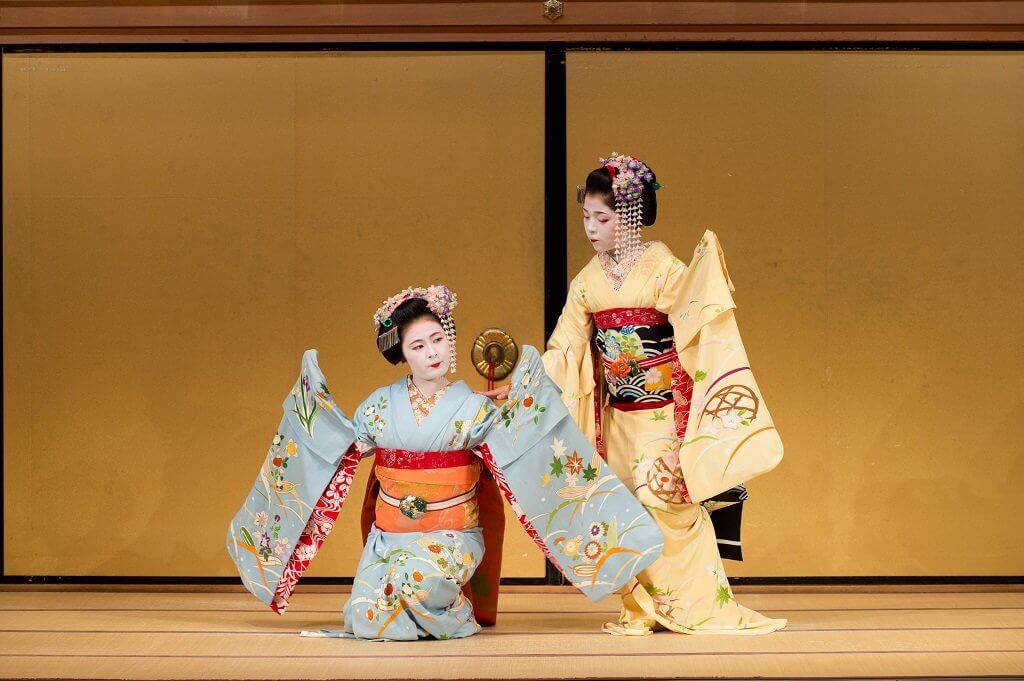 If you follow Hanamikoji-dori to the end, you will reach the temple grounds of Kenninji Temple. Kenninji (建仁寺) is one of the head temples of the Rinzai Sect of Japanese Buddhism, and is ranked third among the five great Zen temples of Kyoto.

Kenninji was established in 1202 and is therefore the oldest Zen temple in Kyoto. It was founded by Myōan Eisai (also called Yōsai), an incredibly influential Buddhist priest. Like many wooden temples in Kyoto, Kenninji has burned down several times over the course of history, so the current buildings are only 250 years old.

Visitors can walk around most of the temple grounds for free, but entrance to the main buildings (the Hojo and Hatto buildings) require you to pay a small fee. On the ceiling of the Hatto Building is famous “twin dragons” mural painted by Koizumi Junsaku in 2002 to commemorate Kenninji’s 800th anniversary. 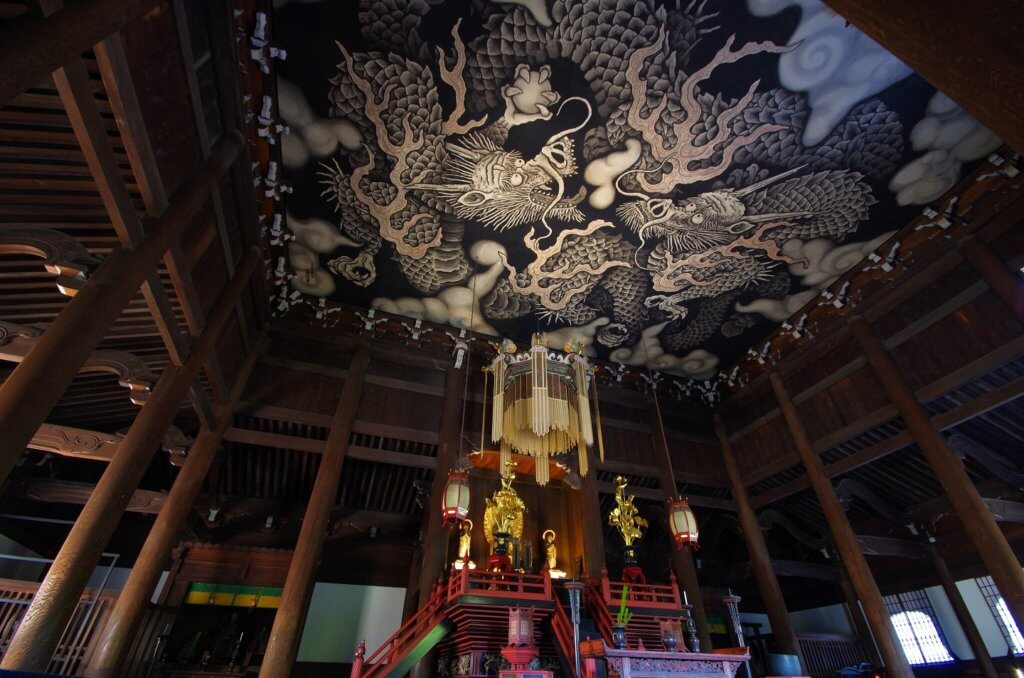 If you exit Kenninji from the west, you will come onto Yamato-Oji Street. Head south here, and you will see Ebisu-Ninja Shrine, a small shrine dedicated to Ebisu, the god of good fortune and prosperity. Though Ebisu Shrineis a Shinto shrine, it is said to have strong connections with Kenninji, which is a Buddhist temple.

According to legend, Kenninji’s founder, Eisai, was traveling back from China, when his ship was caught in a storm. Eisai prayed to Ebisu (who is also the guardian deity of seafarers) and the storm passed. When Eisai built Kenninji, he also gave thanks to Ebisu by having a shrine built in the god’s honor. 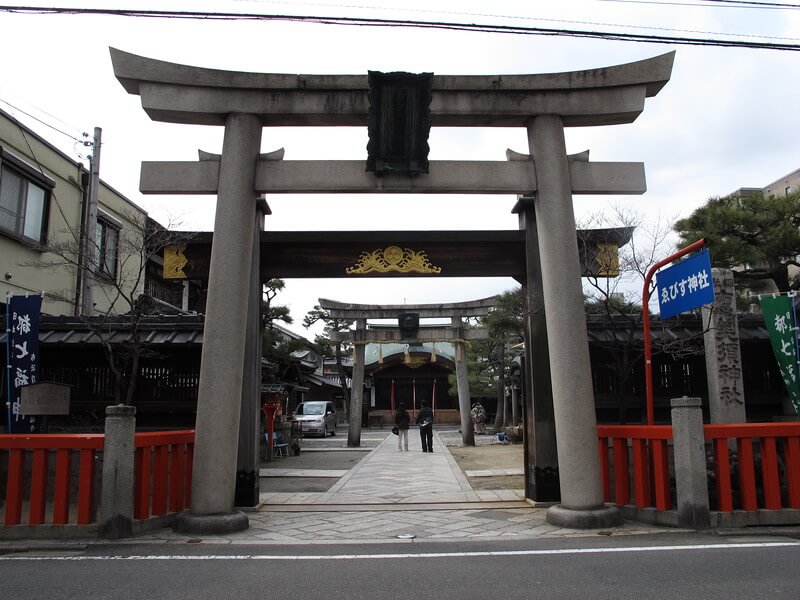 Another incredibly atmospheric part of Gion is the Shirakawa Area, which runs along the Shirakawa Canal parallel to Shijo Avenue. The canal is lined by willow trees, high class restaurants and nice ochaya teahouses, many of which have rooms overlooking the canal. Because its on the outer edges of Gion, the Shirakawa Area is typically quieter than the touristy Hanami-koji Street. 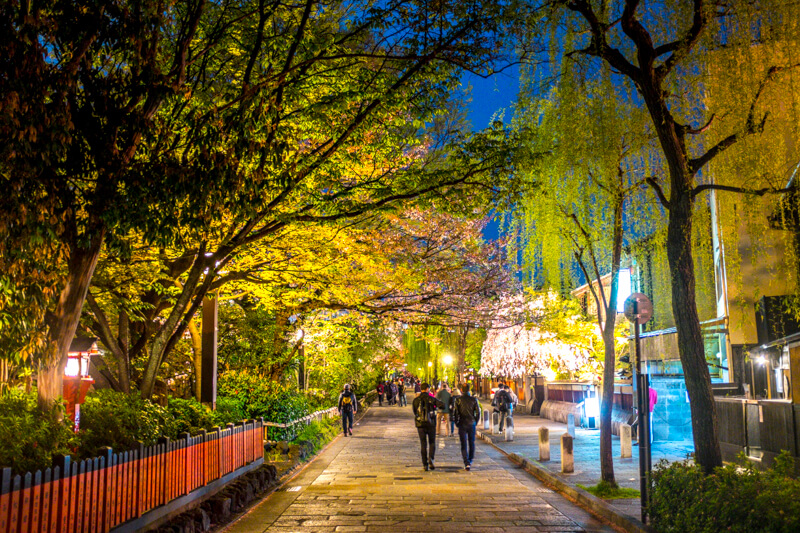 Gion is also famous for its sweets! No visit to Gion would be complete without tasting some. Hanami-koji is home to a popular cake shop called Patisserie Gion Sakai. This shop is just a short walk south of Shijo on the west side of Hanami-koji and it is quite easy to spot – even though it is built in a traditional style, the shop’s wood is very new. It stands out among the rest of the dated buildings on the street.

The most famous sweet shop in Gion, however, is Tsujiri. Its is located on the south side of Shijo-dori between Hanami-koji and Yamato-Oji Streets. Tsujiri sells matcha and desserts, and on the shop’s second floor, people can sit down enjoy the famous matcha-flavored parfaits and cakes.

The shop is extremely popular and often has a line of people waiting down the street! 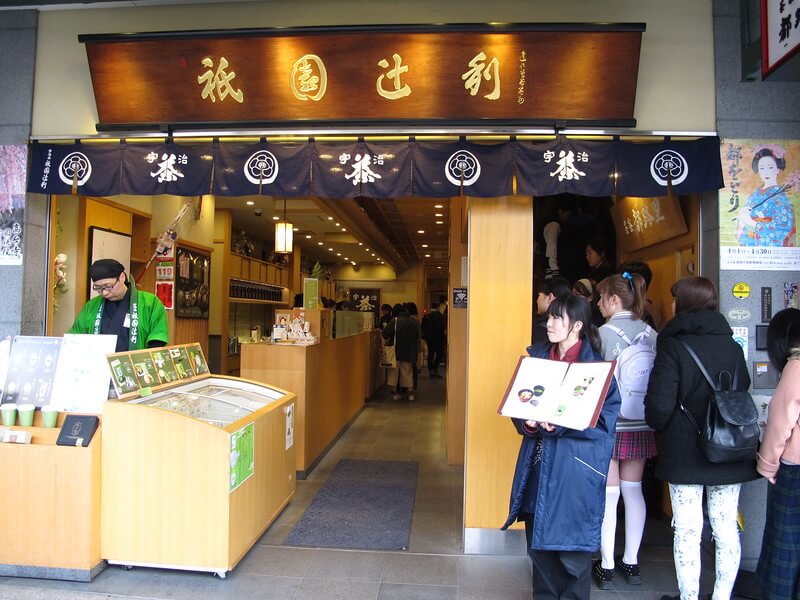 And finally, no visit to Gion would be complete without a visit to the Yasaka Shrine (八坂神社), one of the most famous shrines in all of Kyoto. The Yasaka Shrine was actually originally named Gion Shrine, and it was founded over 1350 years ago. The shrine is located between Kyoto’s Gion District and Higashiyama District.

The shrine’s main hall contains both an inner sanctuary and an offering hall. The shrine grounds also have a large stage lined with hundreds of lanterns that get lit every evening. Each lantern has the name of a local business that had given a donation to the shrine.

Yasaka Shrine is well known for its massive summer festival, the Gion Matsuri, which is counted as one of three greatest festivals in all of Japan. This traditional festival began in 869 as a religious ceremony to appease the gods during an epidemic. The festival actually takes places over the entire duration of July, but the main ceremonies take place on July 17th and July 24th, marked with a grand procession of floats. 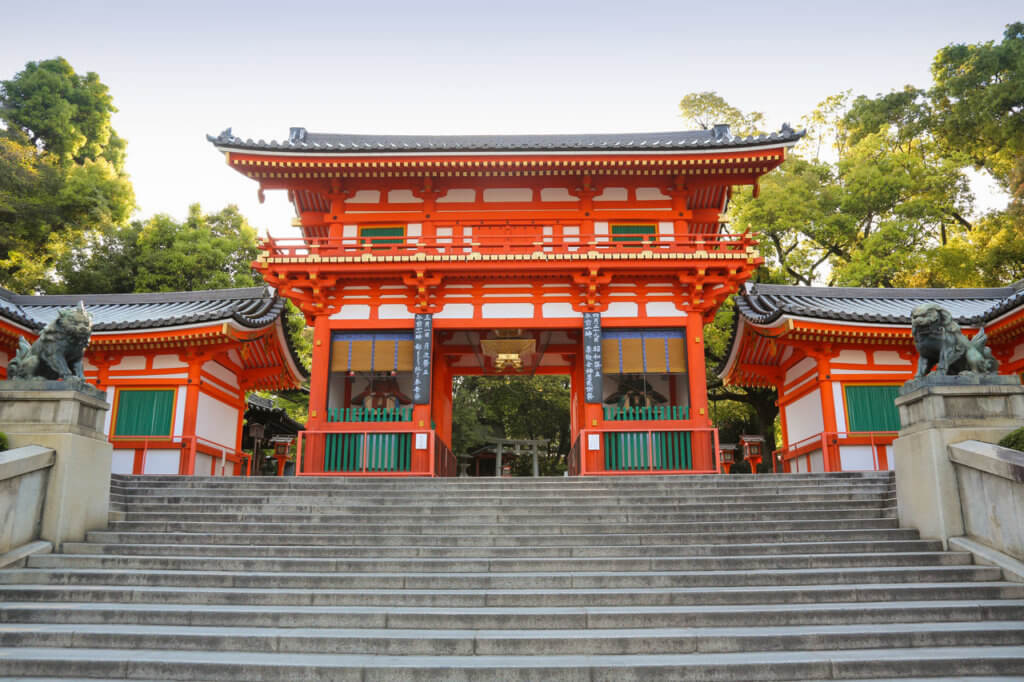