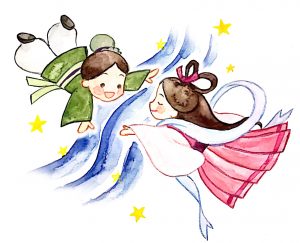 Wishes, dreams and hopes- almost every people around the globe share this universal idea that we all have dreams to fulfill. In this sense, Japan has a festival solely for making wishes come true! Let us find out more about this lovely Summer festival.
It’s that time of the year for long, hot and humid days! Despite the scorching heat of the summer, Japan holds amazing, interesting and colorful summer festivals, but there is one that is particularly near and dear to many: Tanabata Matsuri (七夕まつり) – the Star Festival.

So, What Really is Tanabata?

Also called the Star Festival, its legend has been told throughout Japan for generations. The story dates back to more than 2,000 years ago.
According to the tale, once there was Orihime (the Weaver Princess, the star Vega) and Hikoboshi (a Cow Herder, the star Altair), who fell madly in love with one another. They played so much that they began to neglect their work which made the king very angry. As a punishment, the king separated the lovers. Orihime and Hikoboshi were place on opposite ends of the Amanogawa River aka the Milky Way. But, the king took pity on them, and allowed Orihime and Hikoboshi to see each other once a year on the seventh day of the seventh month, and only if the skies are clear and the bridge out of magpies is built across the Amanogawa River. Tanabata literally means the night of the seventh. The Japanese believe that Orihime and Hikoboshi can’t see each other if it is rainy, so prayers are sent for a good weather.

Generally July 7th. However, since Tanabata festival used to be held based on the lunar calendar, the date varies from region to region. Nowadays Tanabata festival is held on either July 7th or around August 7 in Japan.

How is Tanabata celebrated?

Although the dates of the festival varies from every city or region, Japan use to celebrate in similar ways. Being a colorful festival that Tanabata is, colorful displays of bamboo with paper streamers are put up all over the place- like in schools, malls, train stations, city halls or shopping centers. 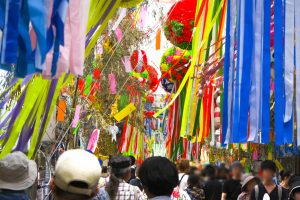 The paper streamers are called tanzaku (wish papers). People of all ages write a wish on these rectangular strips of paper, and tie them to the bamboo stalks, in the hopes of the gods seeing and granting their prayers. However, the expression of hopes and dreams is not limited to tanzaku.

There are other traditional decorations made out of origami and light materials. Some of these colorful streamers include fukinagashi that represent the weaving made by the Weaving Princess, Orihime. Fukinagashi are hung for those wanting to be better weavers.
There is also amikazari symbolizing wishes by fishermen for full nets. You can also see some kinchaku bags for prosperity and orizuru (folded cranes) for longevity.
Bamboo is thought to have become a part of the Tanabata tradition because it grows straight and tall, with upward stretching branches bearing wishes to heaven, which is according to ancient belief, a way by which the spirits of Japan’s indigenous deities could travel from their realm to ours. Bamboo is also believed to ward off insects and was displayed to protect rice crops, symbolizing hopes for a bountiful harvest.

What to Eat on Tanabata?

So, what is the traditional food of the Star Festival? It is sōmen! Sōmen is made of flour, salt, water and small amount of vegetable oil. The long, thin noodles of sōmen were thought to resemble both the Milky Way and the weaving threads worked by Orihime. 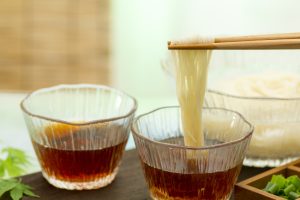 Sōmen is commonly enjoyed by the whole family in a light dipping sauce. Adding star-shaped vegetables to the noodles makes it more exciting and fun to eat!

There are numerous Tanabata celebrations and special events in different regions across Japan. However, here are the 3 biggest Tanabata Festivals in Japan:
＊Due to COVID-19 pandemic, all festivals in 2020 summer are cancelled.

Alongside with the colorful parades, illuminations, fireworks, and traditional performances, there are so many ways to celebrate this festival. Tanabata is a special tradition of hopes, dreams, love, beauty and astrology. If you happen to be in Japan during summer and are hoping to experience a different side of the culture, enjoy by taking part in a local Star Festival celebration!