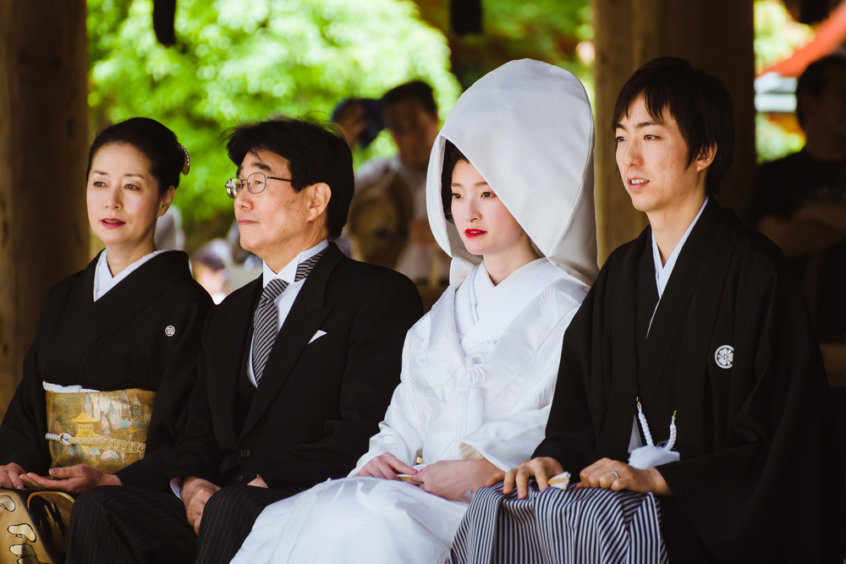 What Happens During a Japanese Wedding Ceremony

Have you ever been to a wedding in Japan? Do you imagine a traditional Japanese wedding ceremony to date back thousands of years? You may be surprised to learn that Shinto weddings, known in Japanese as shinzen kekkon (神前結婚), “Marriage before the gods”, did not actually begin in Japan until the early 20th century. The wedding ceremony incorporates a number of customs based off of Shinto beliefs and values – the most important being the consumption of purified sake, or rice wine. These intimate weddings still remain incredibly common in Japan, and as they are very private ceremonies, they are rarely witnessed by non-Japanese people. 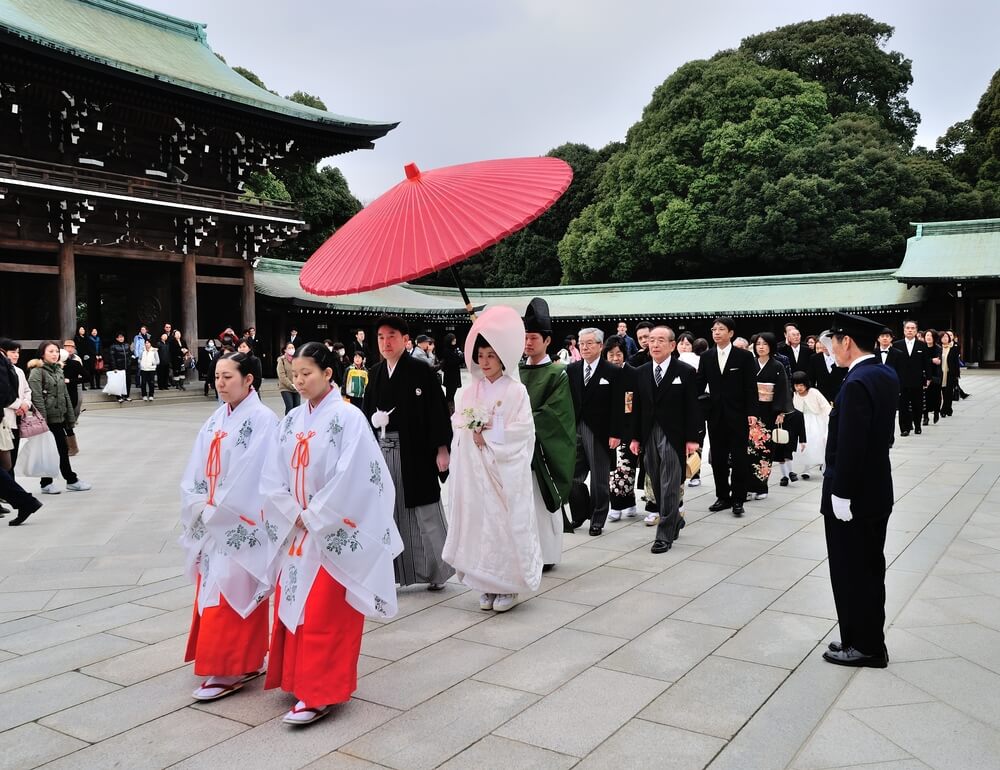 A Japanese wedding ceremony is a true all-day affair, beginning with the bride undertaking the lengthy process of hair, makeup, and getting dressed. As for the hair, the bride at a Shinto wedding wears her hair in a wig beneath a white hood called a wataboshi and/or a white silk headpiece  tsunokakushi. The makeup, of course, can depend upon the bride, but brides typically go for a full face of pale, elegant makeup.

The clothing worn by Shinto brides and grooms is spectacular, as they typically both rent elaborate kimonos to wear for the ceremony. The bride wears a traditional kimono called a shiromuku that is typically red and white, as those are the Shinto colors for purity. The groom is dressed in a black formal kimono called a montsuki, a kimono jacket called a haori, and kimono pants called hakama. The groom’s dark-toned ensemble is a stark contrast to the bride, not unlike the bride and groom of a Western-style wedding. 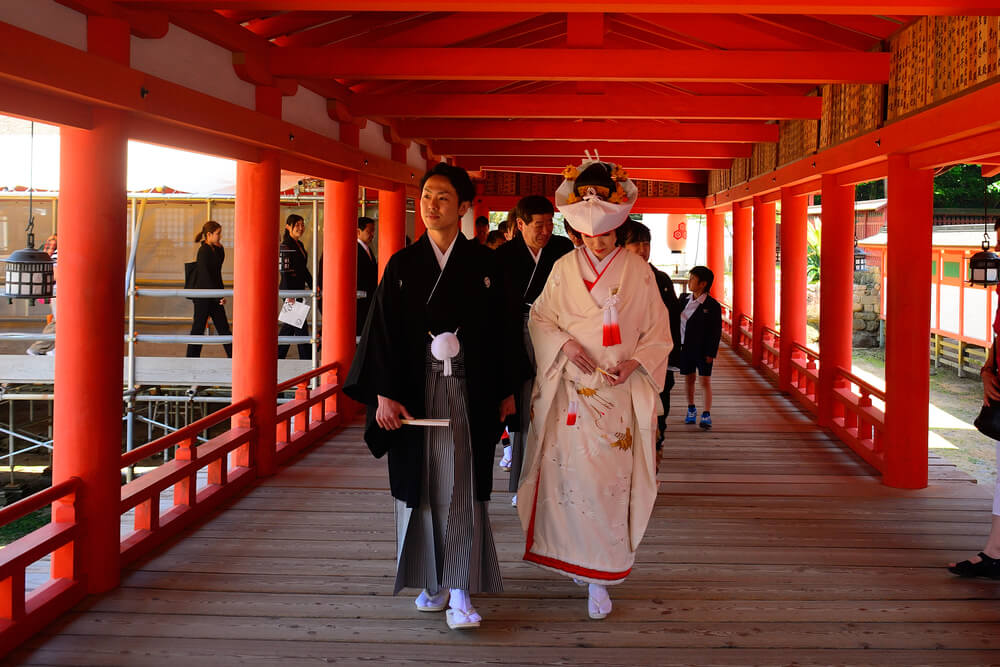 The core of the Shinto wedding ceremony is the purification of the bride and the groom. The priest leads them in rituals of bows and offerings, then reads the Norito aloud to the god. This is a declaration of the new couple’s love for each other, and their promise to be happy for a lifetime. The bride and groom then exchange and drink from three cups of sacred sake three times, in a ceremonial ritual called nan-nan-san-ku-do. Each family member also drinks the sacred sake from their own glass to create a strong bond between the families.

The ceremony ends with the Shinto priest taking out the offerings they dedicated at the beginning of the ceremony. These items are to be treasured by the bride and groom as they are believed to have been blessed with sacred power. In a final conclusive act, all who are present give a deep bow to the god, and the wedding ceremony has officially ended. 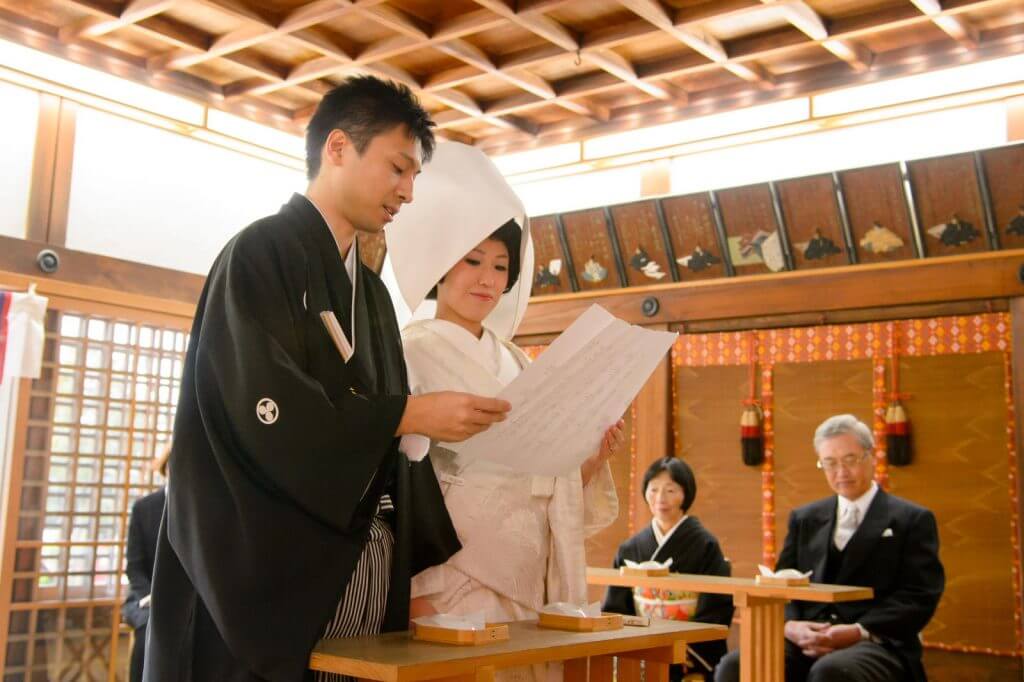 The wedding reception, known as kekkon hiroen in Japanese, includes family, friends, neighbors, and coworkers, and can be a quite large event. There is usually a set entrance fee for the party, which attendees pay in the form of cash ahead of time when they mail their RSVP. Dress attire for receptions is usually pretty formal. The receptions are held in wedding venues or hotel convention rooms, with music, decorations, and tables for all of the guests to sit at. The head table seats only the bride and groom and is the center of attention.

This party kicks off with the entrance of the bride and groom, who have by now changed out of their traditional kimonos and into their own dress and suit. In recent years, with the Western-style “white dress” weddings becoming a growing trend, the bride and groom often attend their wedding reception dressed in a white wedding dress and a tuxedo. The bride changes her hair and makeup to go with this outfit change as well.

Throughout the course of the reception, which typically lasts about 2.5 hours, the guests enjoy dinner and drinks, while certain members come up to a microphone to give speeches and toasts to the couple. There is also some kind of entertainment present at the event, whether its a live band, a comedian, professional dancers, or a magician. Group activites that include all attendees, such as quiz games or bingo, are also popular choices. These lively reception parties are a lot of fun, and after the event has concluded, guests often leave the venues to continue a second or third round at a nearby bar or club. 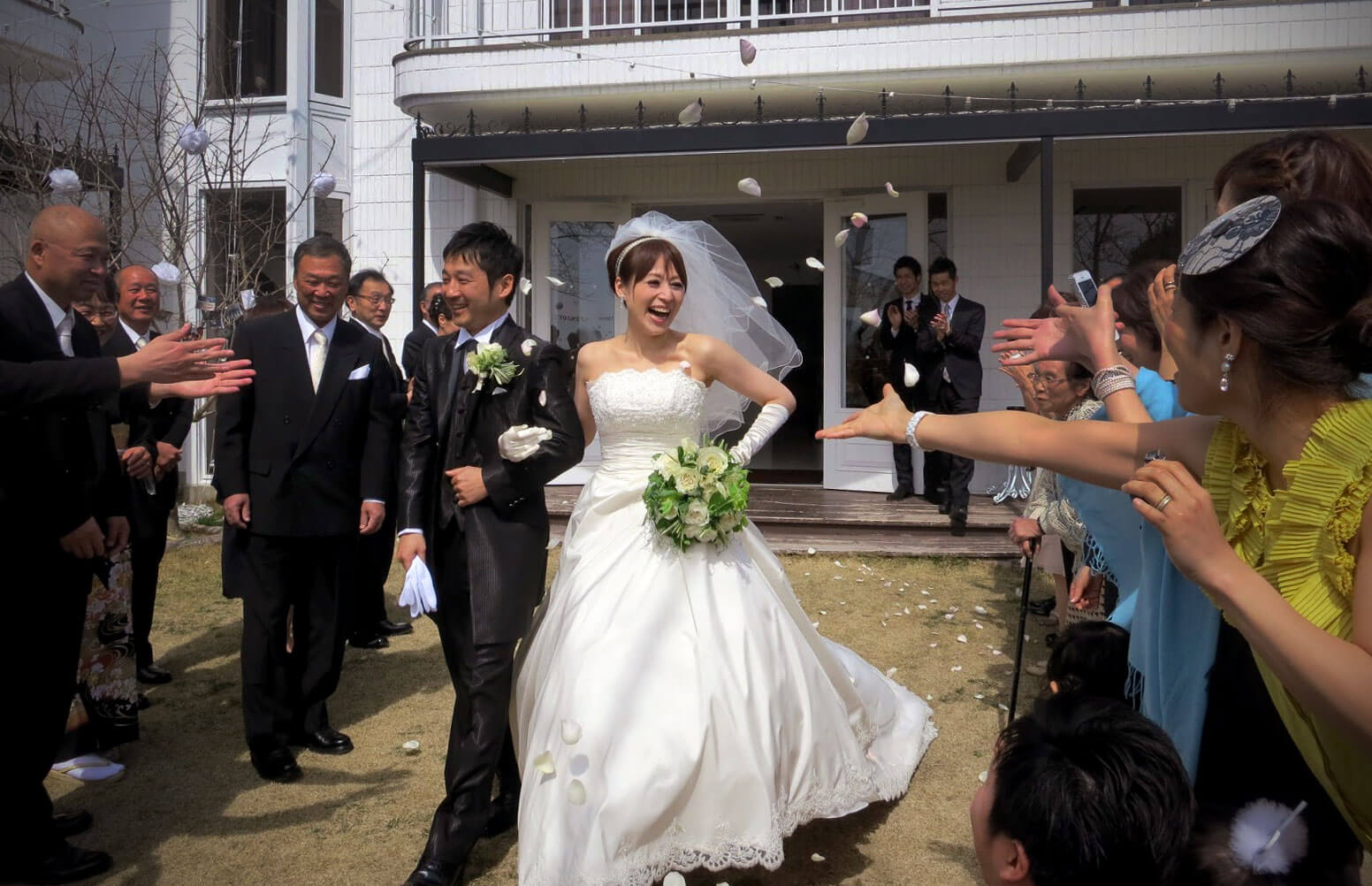 Here’s something that will certainly shock any non-Japanese readers – unlike at Western-style weddings where the newlyweds receive gifts from all who attended the wedding and reception, in Japanese Shinto weddings, the married couple is the one who gives gifts to their wedding guests! Traditionally, it was custom for the bride and groom to give a gift of money presented in elaborately decorated envelopes specifically designed for wedding money gifts. This gesture actually stems from an old tradition that is meant to showcase the family’s wealth. However, in recent years, most guests are given wedding souvenirs called hikidemono, which are usually just sweets and small trinkets selected by the bride and groom. 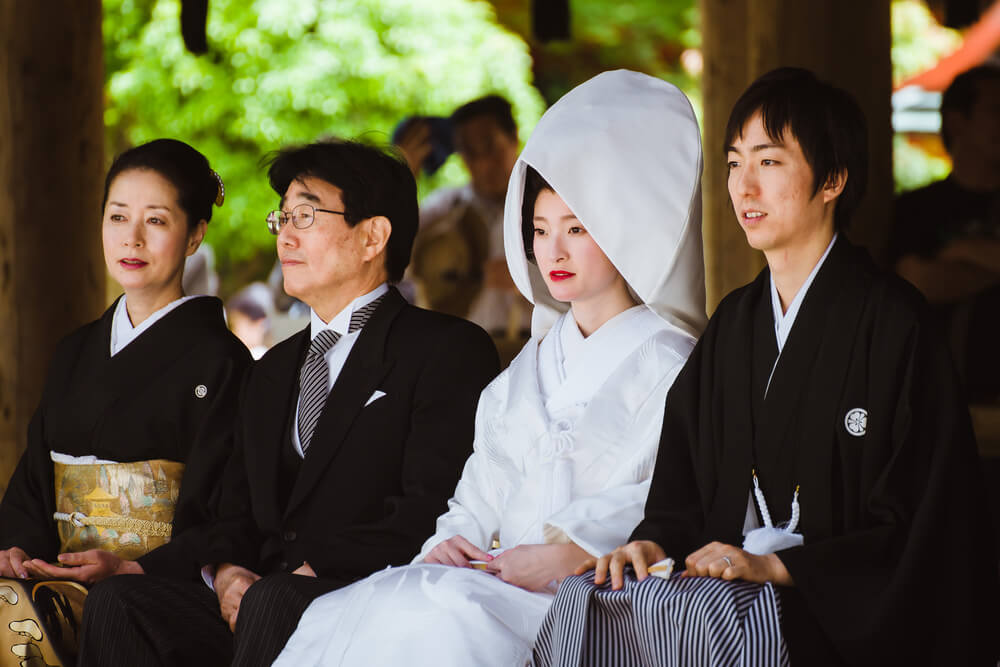 With a perfect combination of quiet tradition and lively fun, Japanese weddings are a very special day for anyone who is lucky enough to attend one. These ceremonies are a truly fascinating part of Japanese culture!