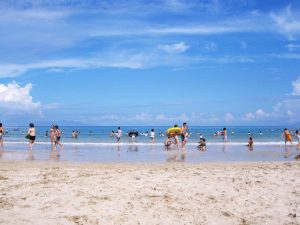 What is the celebration for?

Marine Day (Umi no hi: 海の日) is a public national holiday in Japan. Also referred to as ‘Ocean Day’, this day is held on the third Monday in July. It commemorates the history of Japan’s maritime economic situation. Marine Day was initially known as Marine Memorial Day, established in 1941. Initially, this day used to celebrate the return of the Meiji emperor in Yokohama from his voyage. In 1996, it was changed to “Marine Day” to give gratitude to the ocean and appreciate its importance. As an island nation, Japan has always been abundant with natural resources coming from the seas. This has provided the country with food and has helped in foreign trading and relations. Moreover, in connection to Japan’s ‘Happy Monday System’ back in 2003, Marine Day was then changed and was celebrated on a Monday. Japan wanted to provide longer weekends to its hardworking citizens, thus turning Marine Day into a Monday holiday. In this way, people can spend more time with friends and family while enjoying the beauty of Japan.

How does Japan celebrate?

“Umi no Hi” is the first summer holiday in Japan. There are variety of activities connected to the seas during this day. With a good and warm weather during the season, people often go to the beaches of Japan to make most of the holiday. Since Marine Day is a relatively a modern national holiday, there are no specific traditional activities on this day. However, many aquariums, resort parks and local government unit organize special events to celebrate this day. There are a variety of activities that can be done to celebrate Marine Day while giving back to the oceans. 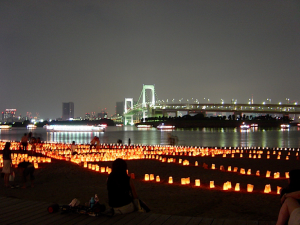 Another popular event during Marine Day is the lighting of lanterns in the sea front. In Odaiba, Tokyo, lanterns are lit up in the beach front to celebrate the ocean’s relationship with Japan.
Officially called the Umi no Akari Matsuri 海の灯まつり, it is celebrated annually at the Odaiba Beach Front Park. From the shore, it is a good view of the Rainbow Bridge and the traditional long boats called yakatabune where people have banquet-style dinners. This year,2018, the event will be held on July 15 (Sunday) and on July 16 (Marine Day). 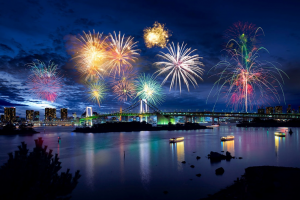 The event will never be complete without the fireworks display at night. Though fireworks can be seen throughout Japan on this day, an annual fireworks display is held in the port of Yokohama where the Meiji Emperor ended his journey. (This year, 2018, the firework festival “Yokohama sparkling twilight” will be held just before the Marine day, 14 & 15th of July) A spectacular display of fireworks is paired with a colorful parade of music and floats. People love to use this day to come together and enjoy beautiful celebrations. Who wouldn’t want to end the holiday this way?

Check out our Facebook page at Japanese Language and Culture!
Why don’t you get a perfect Hanko gift for Japan lover? Peek a Hanko shop.