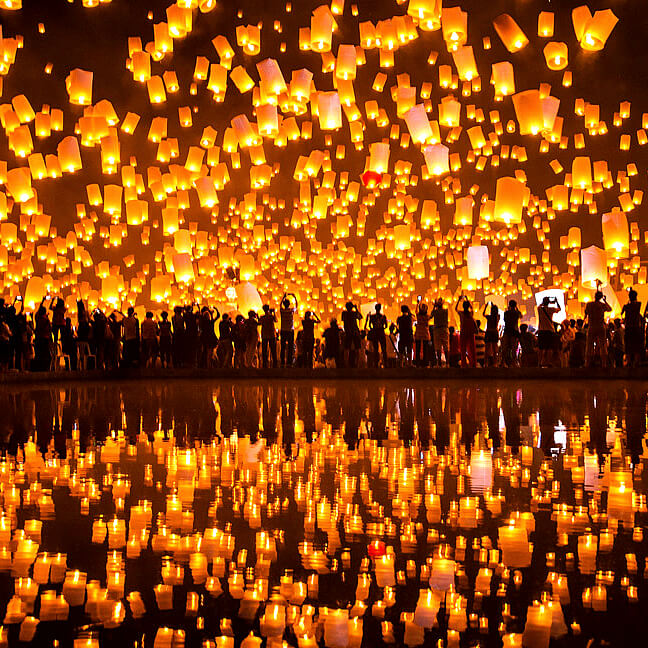 March is one of the best months to visit Japan! Not only are the cherry blossoms starting to come into bloom, but there is also an incredible variety of events and festivals happening all across the nation. From the famous “Penis Festival” to ancient fire festivals, here are our top 10 events happening in Japan in March 2019.

This traditional fire festival has been held every year for more than 1,260 years, without exception. On a cold March night, torch bearers shoulder large pine trees as they run along the balcony of Nigatsu-dō. The embers showered upon the audience below are said to be auspicious. After the final night of the 2-week fire ceremony, monks draw water from the Wakasa Wall under Nigatsu-do. It is believed that the water from the well springs forth once a year and is known to cure ailments. This popular event attracts lots of local people.

The Inabe Plum Grove located in Inabe City’s Agriculture Park is known as one of the best spots to view plum blossoms in Japan. The plum blossom festival, Inabe Plum Festival, is held at Inabe Plum Grove every year, and it attracts visitors from all over Japan. Over 100 kinds, approx 4,500 plum trees are planted in the 380,000 square-meters space on the base of Suzuka mountain range. Visitors can enjoy the magnificent view of colourful plum blooms and stroll in the grove with the great mountain view behind. During the festival, some delicious plum products are also sold, such as plum juice, plum jam and plum extract. The Inabe Plum  Festival is held every year from the beginning to the end of March.

The “Hanatouro” (花灯路) in Kyoto’s Hanatouro Festival means “ path with flowers and light”. This Spring illumination lights up the streets of Kyoto’s famous Higashiyama area from 6pm to 9:30pm during the 10-day long festival period. The 5km route passes Shorenin Temple, Yasaka Shrine, Entokuin Temple, and Hokanji Temple before ending at Kiyomizudera Temple. This special light-up starts on the 8th of March and lasts until the 17th. Apart from the similar December light-up, these two weeks in March are the only time of the year that visitors can see these famous tourist attractions lit up by colorful “Hanatouro” illuminations.

The Tsunan Snow Festival is a winter lantern festival held every year around March 10 in Tsunan City. The festival is held to celebrate the fact that Tsunan is known for being one of the places with the heaviest snowfall in all of Japan. The festival features various snow-related activities and events such as a snowboarding tournament, man-made snow domes, snow treasure hunting and snow illuminations. The highlight of the festival is the “Sky Firefly” event, when over 2,000 sky lanterns are released into the night sky.

This is one of Japan’s three biggest imperial festivals, and it’s held annually on March 13 at Kasuga Grand Shrine. Kasuga Shrine was believed to house the guardian deity of the Fujiwara clan. The highlight of this ceremony is that the scene resembles an Imperial Emakimono (picture scroll). The ceremony can be seen only from the approach path.

This unique festival is dedicated to fertility. There is a procession to the Tagata Shrine featuring a large genital-shaped structure made by Kiso Hinoki that has a diameter of 60 cm and a length of about 2 meters. This festival is famous for being one of the most ridiculous and unique in all of Japan.

This fire festival takes place every year on the Saturday and Sunday closest to March 14th and 15th. The festival officially declares the arrival of spring to Omihachiman City. During the festival period, multiple events take place on the festival grounds – on the lefthand side is a fire festival event, and at the very center of the festival is a giant float decorated with the Chinese zodiac of that year. The zodiac animal is actually made from ingredients such as black beans, red beans, sesame, seaweed and squid flakes.

Ueno Park is a large public park next to Ueno Station in central Tokyo. The park is famous for the collection of museums located on its spacious grounds, as well as Ueno Zoo, Japan’s first zoological garden. Additionally, Ueno Park is one of Tokyo’s most popular cherry blossom spots, as it’s main central pathway becomes a sakura tunnel lined by almost 1,200 cherry trees. There is also a lake, where people can rent paddle boats and enjoy the sight of the cherry blossoms from the water. During the festival period, the cherry blossoms trees are illuminated by light-ups so they can be enjoyed at night as well.

Osaka’s iconic castle also serves as a popular cherry blossom viewing spot as well, as over 3,000 cherry trees are planted on the spacious castle grounds. Within the grounds is also the Nishinomaru Garden, a lawn garden with 300 cherry trees, a tea house, the former Osaka Guest House, and nice views of the castle. Not only is it a particularly nice place for a picnic, because of its many trees within the wide lawns, but it also features a light up in the evening. The castle grounds are open for extended hours during the cherry blossom season.

Mount Yoshino (吉野山, Yoshinoyama) is vastly regarded as Japan’s most famous cherry blossom viewing spot. It is said that the first trees were planted along its slopes more than 1300 years ago. The mountain is covered in approximately 30,000 cherry trees of many different varieties. Mount Yoshino is divided into four areas: the Shimo Senbon (lower 1000 trees) at the base of the mountain, Naka Senbon (middle 1000 trees), Kami Senbon (upper 1000 trees) and Oku Senbon (inner 1000 trees) at the top of the mountain. Visitors who come to Mount Yoshino during cherry blossom season can enjoy the various sections of cherry trees as they go up the mountain. There are also a number temples and shrines, parks, and viewpoints that make great hanami spots along the way.