The New Year certainly kicks off with a bang in Japan! Between dramatic fire festivals and incredible winter illuminations, there are a number of things that you simply can’t miss if you are in Japan this month. Here are our top 10 events happening in Japan in January 2019. 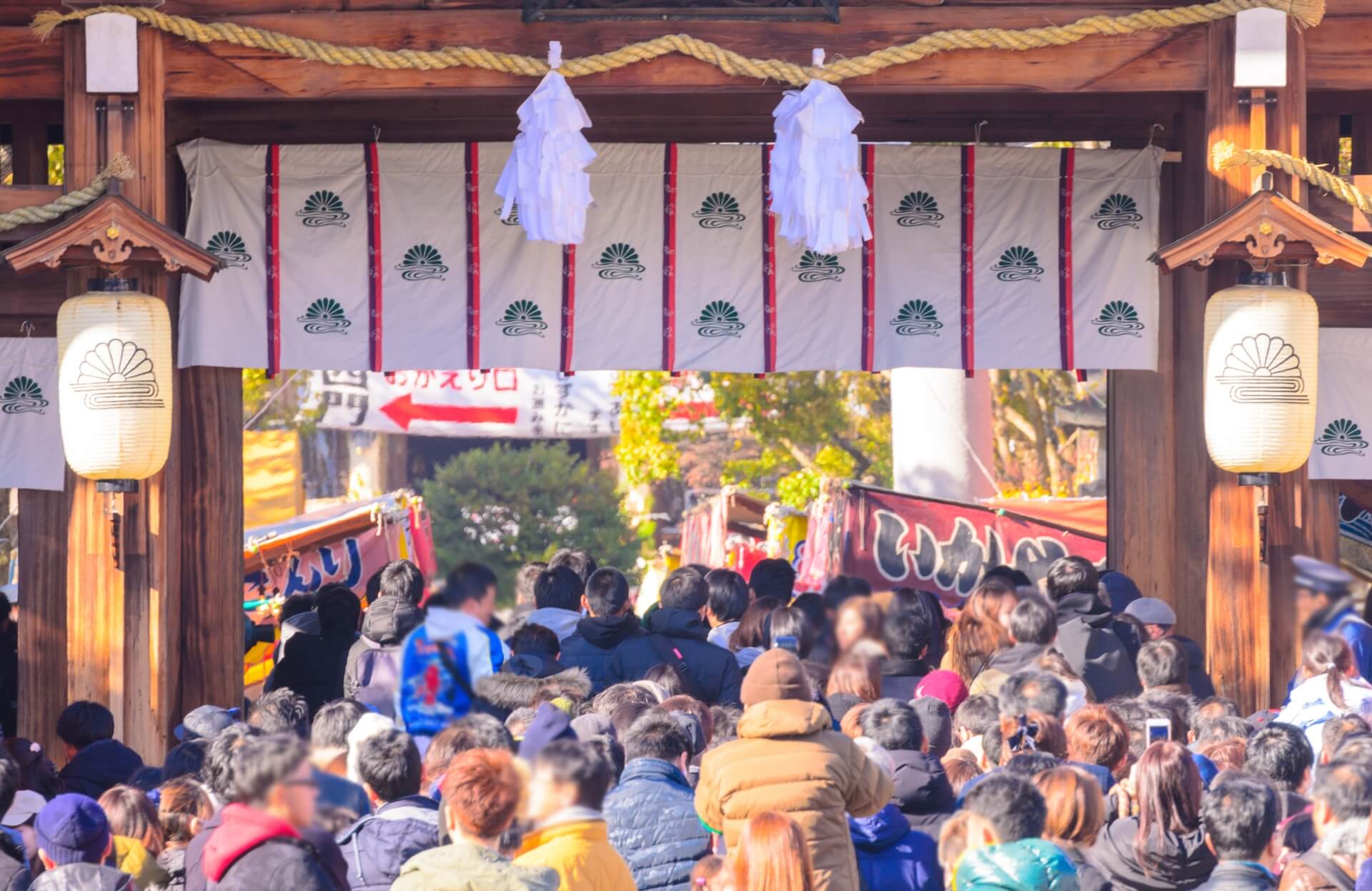 During the first few days of January, millions of people all across the nation flock to shrines and temples in a tradition called Hatsumōde. In Japan, it is custom to visit a shrine within the first few days of the new year to receive blessings and good fortune for the year to come. During the visit, people draw omikuji fortunes and offer prayers to the shrine’s diety. Some of the most popular Hatsumōde spots are Tokyo’s Meiji Shrine, Kyoto’s Fushimi Inari Taisha, Osaka’s Sumiyoshi Taisha and Kamakura’s Tsuruoka Hachimangu. Each of these popular Hatsumōde spots attract more than a million visitors over the first few days of the new year. 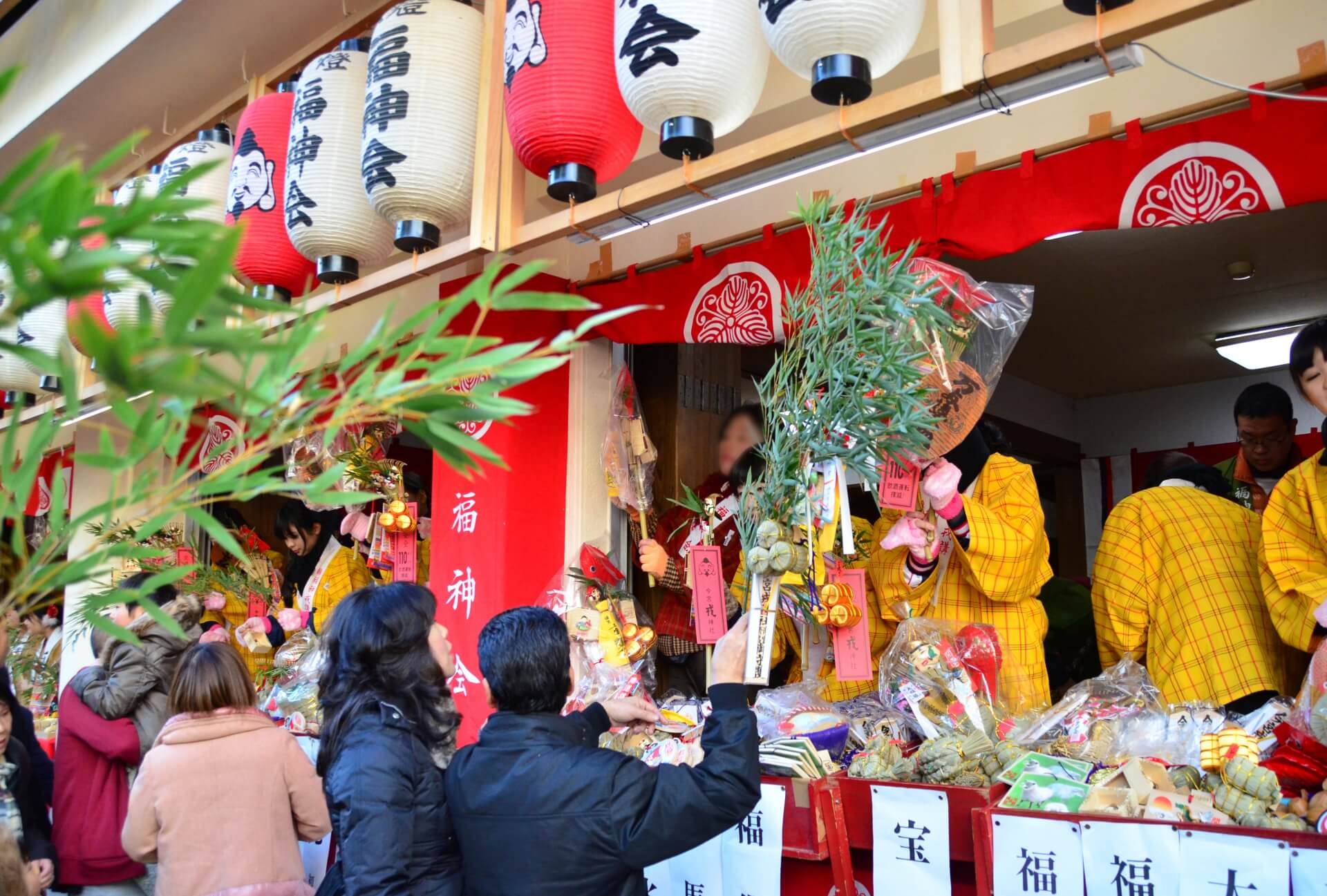 Held every year for a days in early January, this nationwide festival is the first major festival of the new year. The festivities are all dedicated to Ebisu, one of the seven lucky Gods of Japanese mythology, who is responsible for prosperity and business. The festival is celebrated all over Japan, with the largest events occurring in the Kansai region at Kyoto Ebisu Shrine (京都ゑびす神社), Hyogo’s Nishinomiya Shrine (西宮神社), and Osaka’s Imamiya Ebisu Shrine (今宮戎神社).  These three shrines are the three biggest Ebisu Shrines in Japan.

Kyoto’s Toka Ebisu Festival is held from Jan 8 – 12 every year. The most famous event is when Maiko-san (apprentice Geisha) and famous actresses are invited to the shrine to pass out the lucky bamboo.

Hyogo’s Nishinomiya Tōka Ebisu Festival is held every year from Jan 9 – 11, with the main festival day falling on January 10th. This event is famous for its “fuku otoko” (lucky man) selection which is held on the morning of January 10th.

The Tōka Ebisu Festival in Osaka is the largest of the big 3 Ebisu festivals, as over 1 million visitors come every year. The most famous event is the fuku-musume (lucky girl) selection, where only 50 women are selected out of over 3,000 applicants. The selected women then hand out lucky charms to festival visitors. 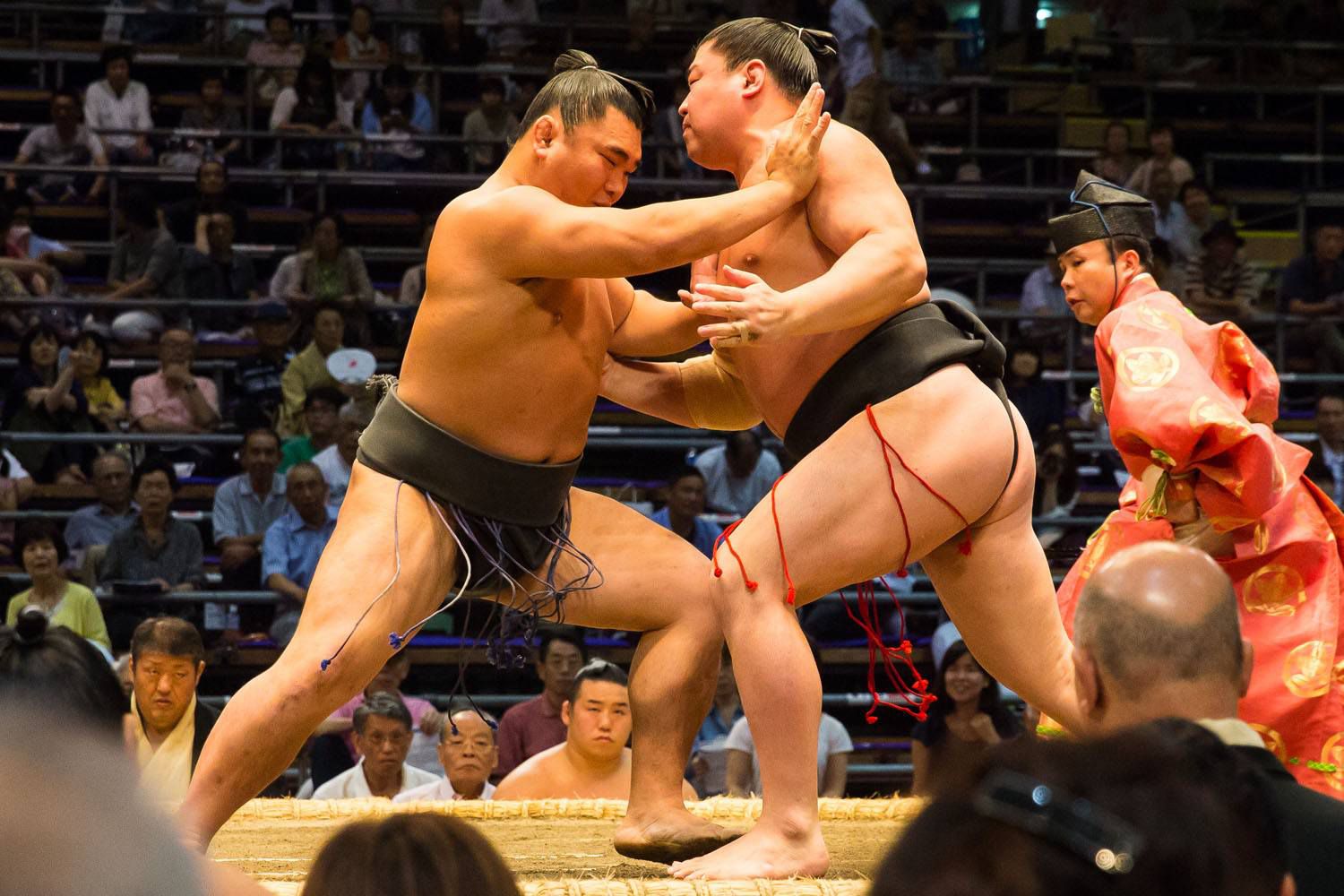 This is the first major sumo tournament of the new year! As the national sport of Japan, sumo wrestling continues to sell out entire stadiums, even to this day. The national tournament is only held a handful of times each year, so if you want to witness this iconic traditional Japanese sport, this is your chance to do it.

WHERE: Ryogoku Kokugikan Stadium in Tokyo 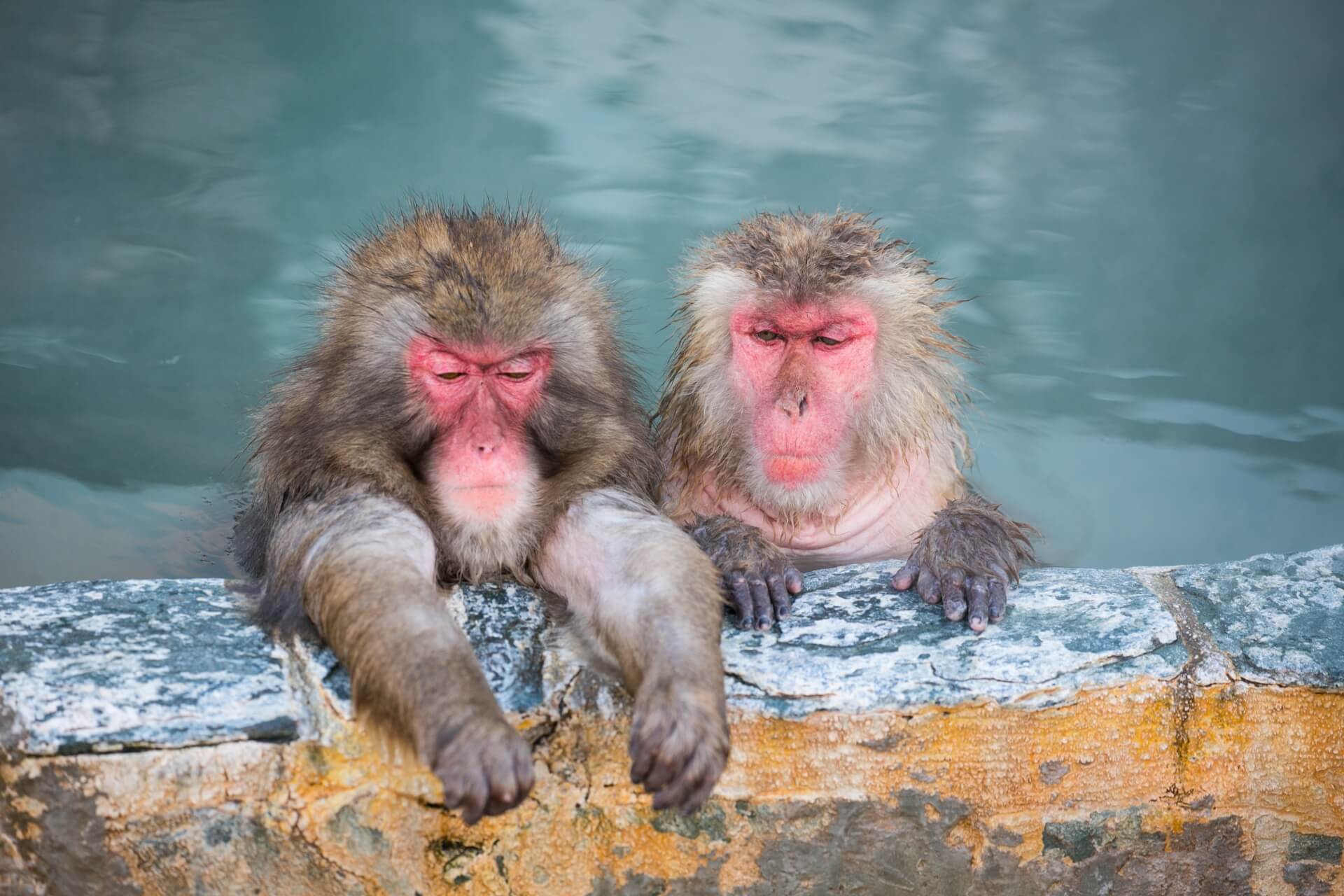 This famous park is home to over 150 wild Japanese Macaques, which are more commonly known as Snow Monkeys. Within the park grounds, there is a natural hot spring where the monkeys love to bathe just like humans! People can get up close enough to photograph the snow monkeys, but are not allowed to feed or touch them. The most popular time of the year to visit the snow monkeys is in January or February, when the scene of the monkeys bathing while the snow falls is especially picturesque.

This is a unique festival of fire boasting a tradition of 500 years. Father demons, mother demons, and even children demons in masks carry large flaming barrels around the hall in a hellish scene that is meant to protect the residents from disaster. Designated as an important intangible folk cultural property of the country, it is held on the evening of January 14 every year. 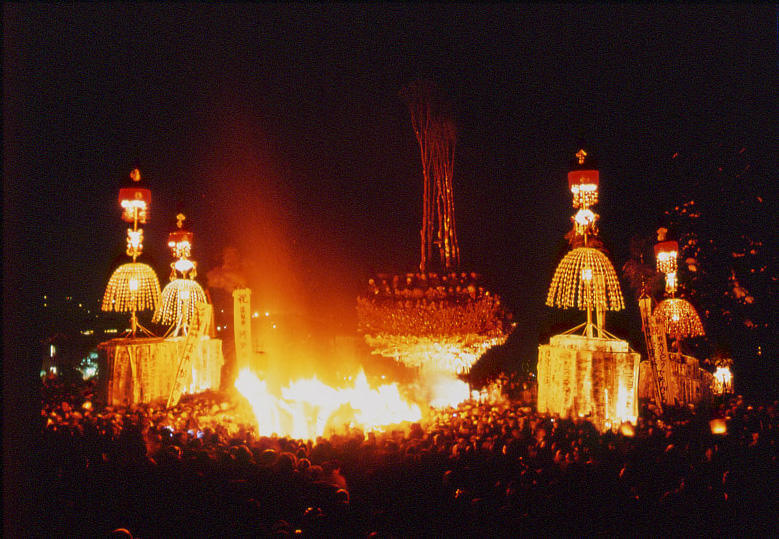 The Nozawa Fire Festival is one of the three biggest fire festivals in Japan. It is held at Baba-no-hara, Nozawa Onsen Village on the 13-15th of January every year. There are festivities on all 3 days of the festival, with the biggest event occurring the final night on January 15th from 7 to 10pm. Massive crowds gather around the large, burning torch, as tall banners are carried and set afire as well. 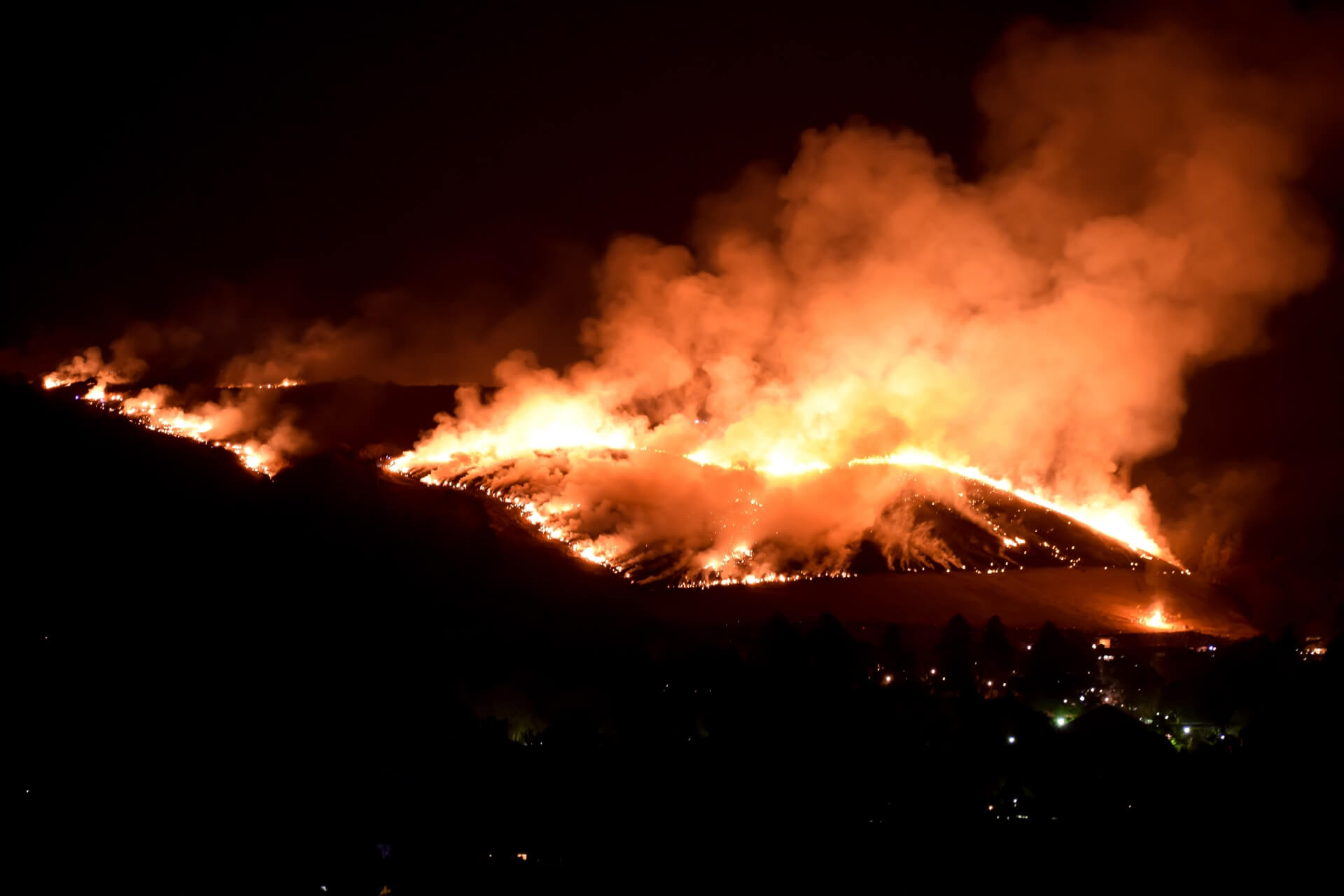 This “mountain burning” festival is held every year on the fourth Saturday of January. It features a traditional event that originated in order to announce the coming of early spring to the ancient city of Nara. The entire mountain is set afire, and the spectacle of the burning in the night sky is quite an incredible sight. Just after 6pm, the large fireworks set off at the base of the mountain paint the clear winter night sky with vivid light and color.

This over-the-top winter illumination is held every year in Osaka Castle’s Nishinomaru Garden. This history-inspired light show reflects on the changes that took place across Japan during the Meiji Restoration, from the end of the Edo-era and into the Meiji-era. Visitors can walk along LED recreations of the Japanese streets of the 1860s, enter Japan’s first “Japanese Maze,” and enjoy a 30-meter long “history book in lights”. The fact that you can also see the iconic Osaka Castle in the background is another nice touch to this winter illumination. 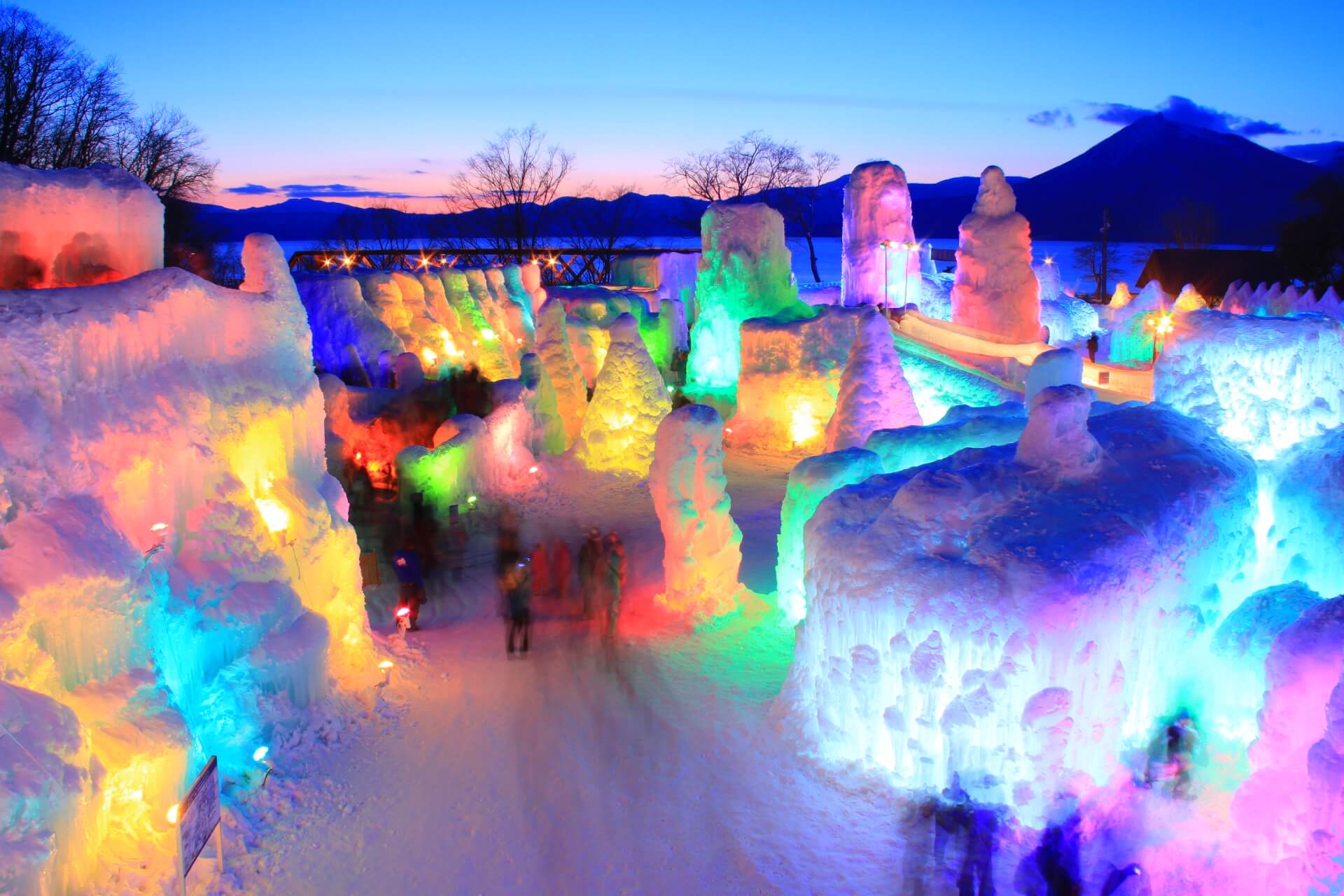 This is a winter festival representing Hokkaido where large and small ice objects are frozen and sprinkled with a sprinkler at the Lake Shikotsu. During the day, the festival shines in a natural blue called Shikotsuko Blue, and in the evening, it is illuminated with colorful lights and creates a romantic atmosphere.
※Illumination: 16:30～22:00 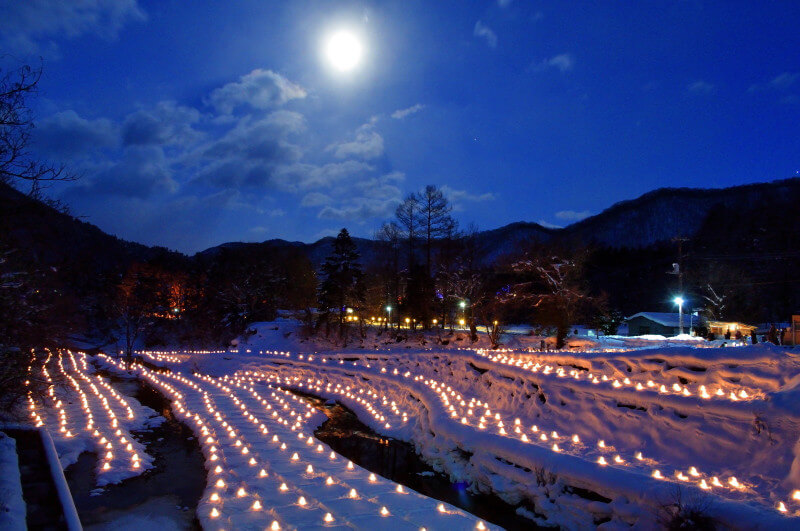 This festival of Yunishigawa Onsen kicks off in late January, and lasts until early March every year. The highlight of the festival is the handmade snowmen that have been built by the local residents of the area. During the day, visitors can enjoy a sleigh ride or eat barbecue inside real snow huts. The festival grounds turn magical in the evening, when seemingly endless rows of small huts that line the river are lit by hundreds of candles. The combination of candlelight and fresh snowfall in this charming little town is a true must-see!