The month of November is a beautiful time of transition in Japan. The leaves change colors for several weeks throughout the nation, and the festivals begin to shift from the harvest-centered events to colorful festivals featuring autumn foliage and LED illumination.From gorgeous maple festivals, to entire theme parks lit by millions of LED lightbulbs, here are our top 10 festivals happening in Japan in November. 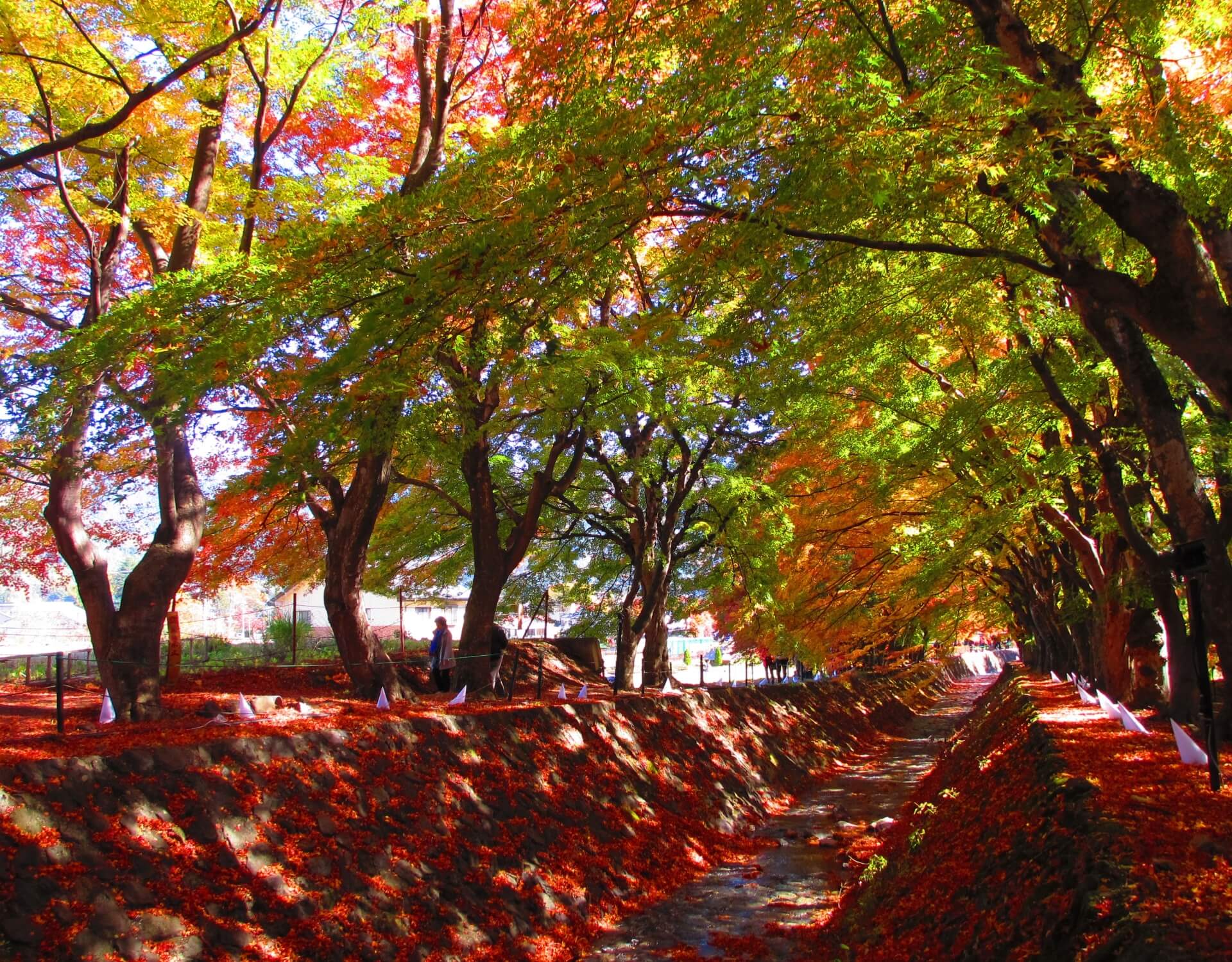 Lake Kawaguchi (Kawaguchiko, 河口湖) is the most popular tourist destination among the 5 lakes at the base of Mt Fuji. And, the Fuji Kawaguchiko Autumn Leaves Festival (富士河口湖紅葉まつり) is one of the most popular November events in all of Japan. The highlight of the event is the colorful autumn leaves found all around the Lake Kawaguchi area, plus the fact that the amazing scenery includes the view of Mt Fuji in the background. The festival is held at the northern shore of Lake Kawaguchi, but there are several scenic view spots around the festival sites. The most popular autumn leaves spot is the Momiji Kairo (もみじ回廊), a 2km-long “Maple Corridor” of over 60 colorful maple trees. After the sunset around 4:30pm until 10 pm every night, the trees are lit up so that visitors can enjoy walking under them even when its dark. 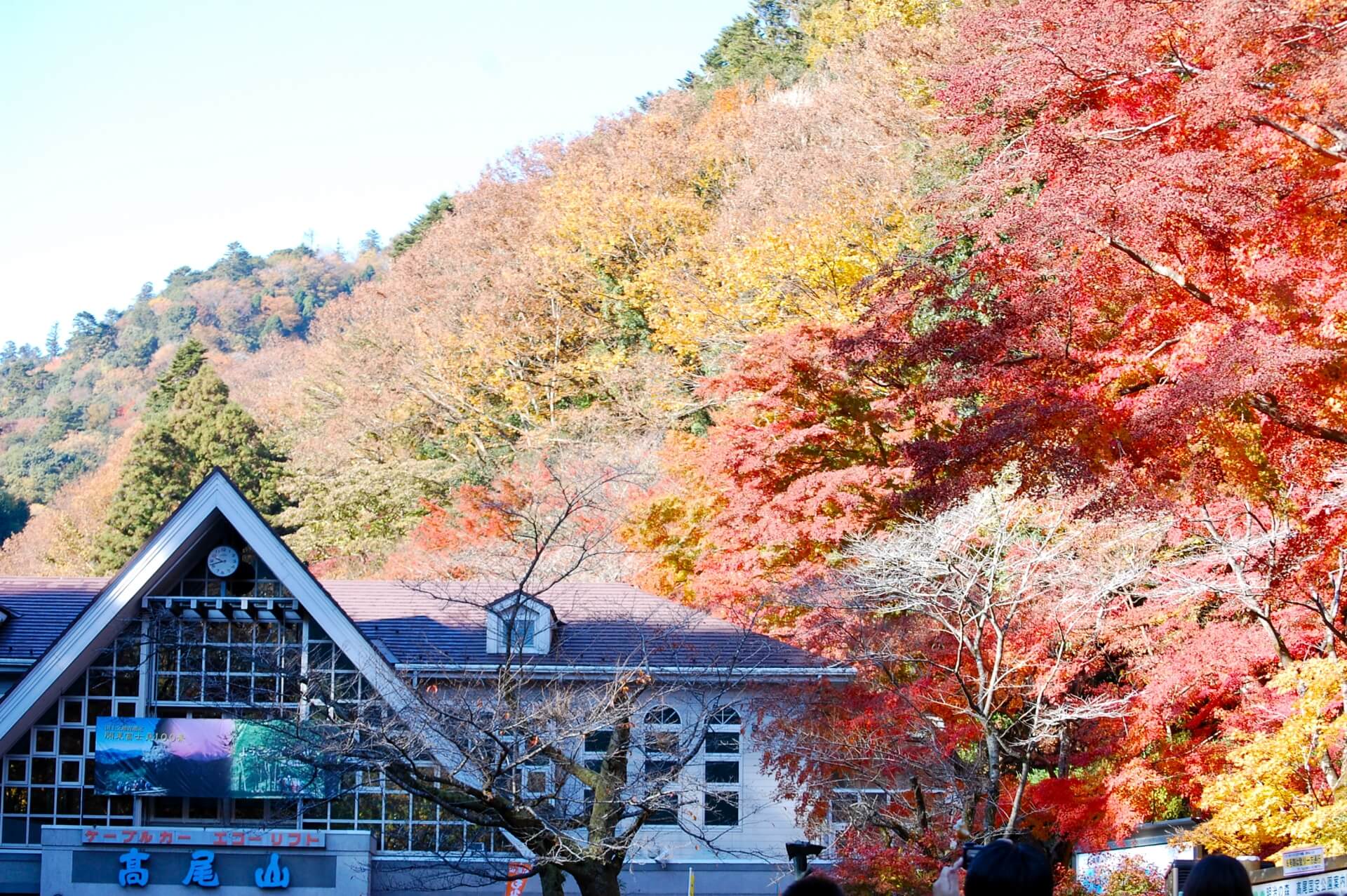 If you are seeking beautiful autumn colors near Tokyo, look no further! Mount Takao Maple Festival (高尾山もみじまつり) is incredibly beautiful, and fun. For the entire month of November, there are special events held at Mount Takao revolving around the autumn colors of the fall season. As a matter of fact, this festival period is actually the mountain’s busiest season. Mount Takao is especially popular on weekends and holidays, for throughout the month of November, there are concerts, taiko drumming and yosakoi dances at the square next to Kiyotaki Station, near the cable car that takes people up the mountain. Halfway up Mount Takao, there is a special exhibition of kokeshi dolls for sale that were locally made in Tokyo. All these events are just attractions adding onto the main highlight – the colorful fall leaves of Mount Takao (高尾山), which look amazing from the cable car ride to the top!

Out of all of the traditional dance festivals in Kyoto, this Gion Odori (祇園おどり) is the only one that takes place in autumn. It was first held in the year 1894, and is therefore one of the longest-running shows. However, it is also one of the smallest, and consequentially has a more intimate feel than others. During the 10-day festival period, here are two performances every day. Tickets range from 3500–4000 yen depending on whether you would like to include the tea service or not. Tickets can be purchased at Ochaya, Gion Kaikan, Kyoto City Tourist Association and Gion Higashi Ochaya Union, as well as travel agencies. It’s a very unique Japanese cultural experience! 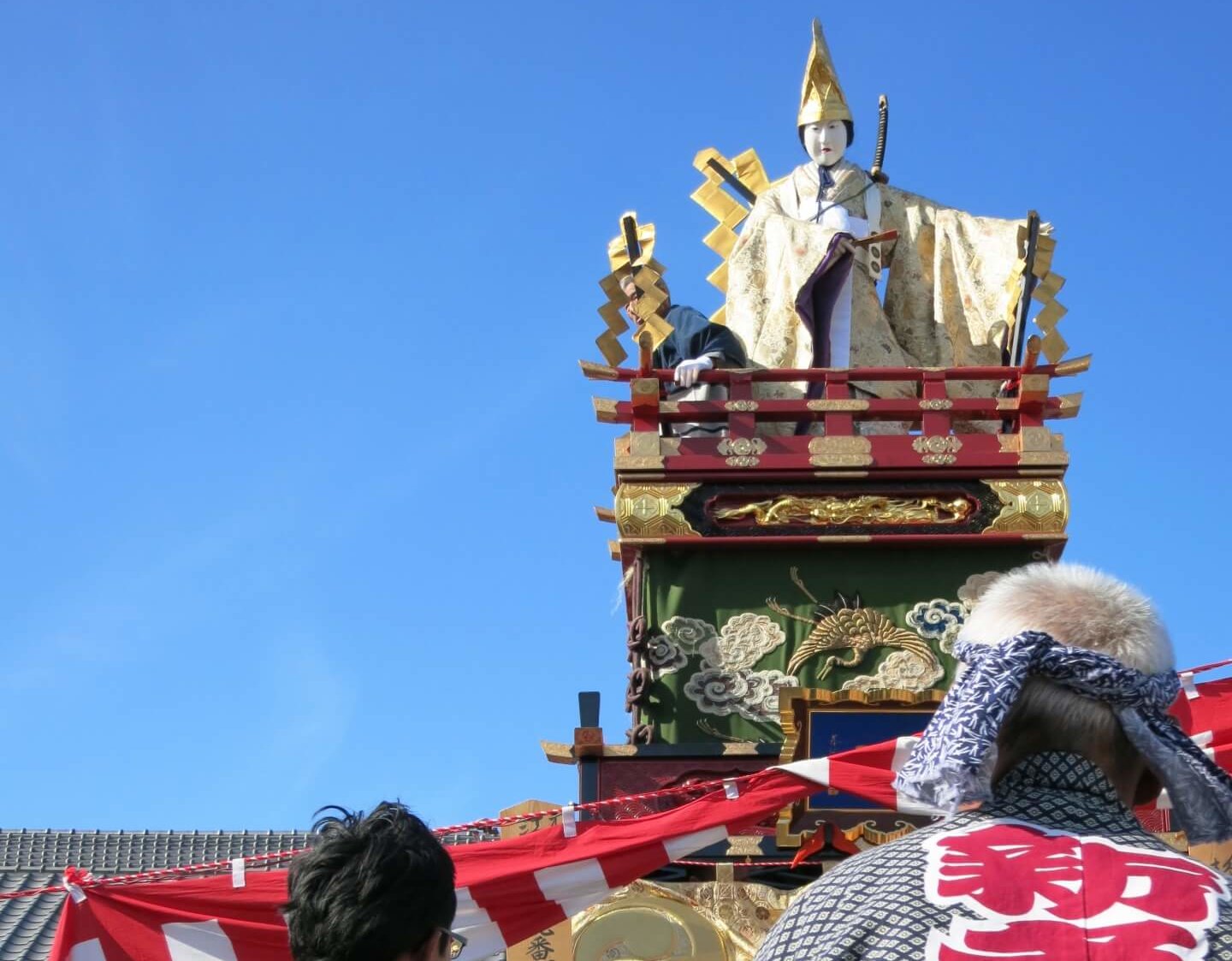 The Tochigi Autumn Festival (とちぎ秋まつり) is a three-day traditional festival held in Tochigi City in Tochigi Prefecture. It’s only held once every 2 years, and it falls on the even years. The highlight of the festival is the procession of the massive wooden floats called dashi (山車) that are topped with dolls (ningyo, 人形). The procession takes place on both the second and third days of the festival. At night, the dashi floats are illuminated by lanterns and then paraded through the city, and it is a truly magnificent sight. This is the largest festival in Tochigi City, as a large number of tourists come from all over Japan to witness it in person. 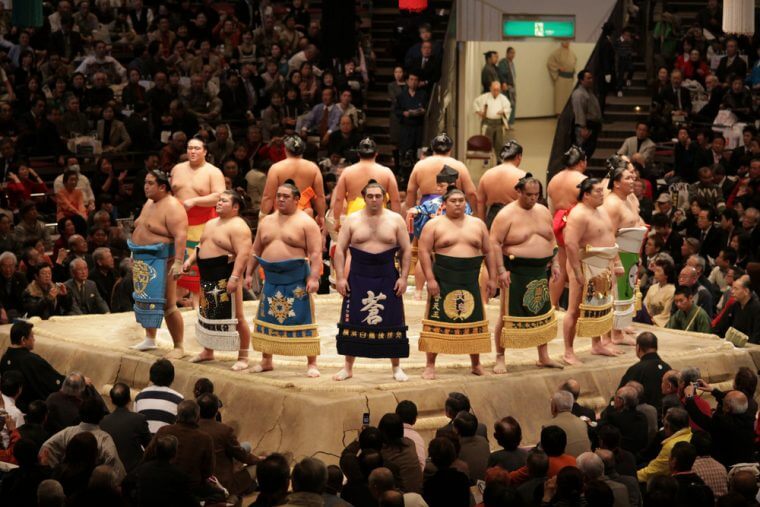 Sumo (相撲), the famous national sport of Japan, is a competitive full-contact wrestling where a rikishi wrestler can win by either forcing his opponent out of the circular ring, or by making him touch the ground with any body part other than the soles of his feet. The kanji for sumo (相撲) literally mean “striking one another”. Every year, the last major sumo tournament of the year takes place at the Kokusai Center in Fukuoka. Just like all the other grand sumo tournaments, the wrestlers face off against one another for over 15 full days before a single winner is declared as the champion. As with the other tournaments, the venue will be the most crowded on the first days, the middle weekend, and then again during the last few days of the tournament. Outside of these busy periods, it should be pretty easy to purchase on an unreserved ticket.

Meiji Jingu Gaien (明治神宮外苑), which is famous for the avenue lined with Ginkgo trees, is the most popular spot for viewing autumn leaves in the central area of Tokyo. 2 lanes of approximately 150 Ginkgo trees are lined along this avenue for a beautiful 300 meter stretch. The best viewing time is a span of about 2 weeks starting in the middle of November. During this peak season, the Jingu Gaien Ginkgo Festival “Icho Matsuri” (神宮外苑いちょう祭り) is held from 10am to 5:30 pm. In addition to the beautiful golden leaves, there are temporary stalls selling noted products from different regions of Japan, as well as food and drink stalls around the Jingu Gaien softball stadium and training grounds. After the leaves fall from the trees, they blanket the ground in a way that creates a gorgeous natural golden carpet. Therefore, the area continues to be popular with visitors long after the trees have lost their golden leaves.

Huis Ten Bosch: Christmas in the City of Lights

Every year, the famous Huis Ten Bosch theme park in Sasebo, Nagasaki Prefecture, features this Christmas in the City of Lights display that includes a tall LED waterfall, a light and fountain canal cruise, and collaborations of light with flowers and music. In 2012-2013, the display incorporated 10 million light bulbs (the most in the world at the time) that spread across the entirety of the park’s expansive grounds. Christmas in the City of Lights will be utilizing about 13 million lights. It is a colorful nighttime LED wonderland.

Japan’s famous Kenrokuen Garden (兼六園) is a beautiful landscape garden that is counted as one of the three most notable gardens in all of Japan. It was founded and designed over several generations during Japan’s Edo period (1603–1868) by the feudal lord of Kaga, which is currently the southern part of Ishikawa Prefecture. Although the expansive garden is beautiful year round, the colorful fall leaves make it especially popular in the autumn months. In addition, beginning in November and continuing until March, visitors can see yukitsuri around trees, which is the use of bamboo poles to give the trees extra support to prevent them from being broken by heavy snow.

Although illumination events are currently held in cities all around Japan, Sapporo is where the tradition first originated. In Sapporo’s annual White Illumination, approximately 520,000 light bulbs are used in Odori Park to illuminate a variety of cosmic and Christmas-themed objects. This winter light-up takes place at three different locations: Odori Park, Sapporo Eki-mae Dori and Minami 1-Jo Dori, with Sapporo’s famous Odori Park being the biggest venue. All three locations begin their illuminations on November 20th. The lights will be switched on each day between 4:30pm and 10pm except for the 23rd to the 25th of December, when they will be on until midnight. 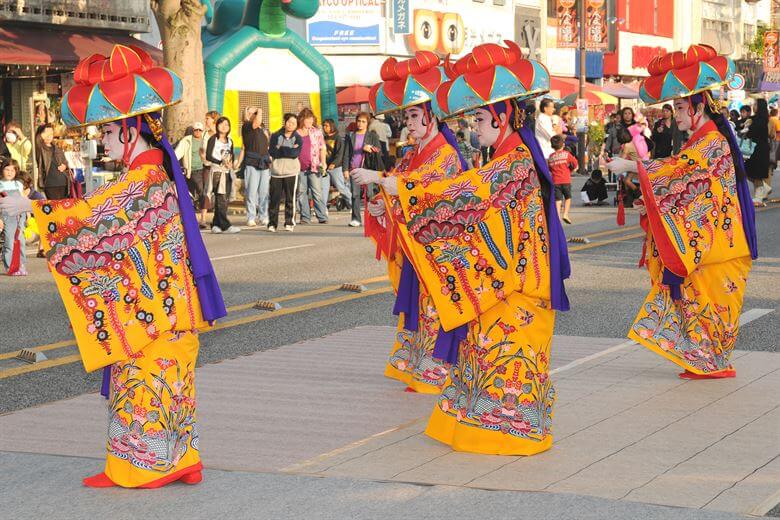 Okinawa is an incredibly popular summer destination in Japan, but the annual Okinawa International Carnival in late November is one of the island’s biggest celebrations of its multi-cultural environment. Because over thirty different nationalities reside Okinawa City, the Okinawa International Carnival celebrates all of them in a 2-day street festival. Noteable attractions in years past include Samba Queen competitions, biker runs, live music, tug-of-war competitions, karate demonstrations, and more. There are also dozens of souvenir stands and food vendors offering regional delicacies from all over the world. With the music, costumes, dancing, and food, this carnival is a great experience that stimulates all of the senses!

WHEN: Nov. 20 (TBC. Please check the website for the latest information)