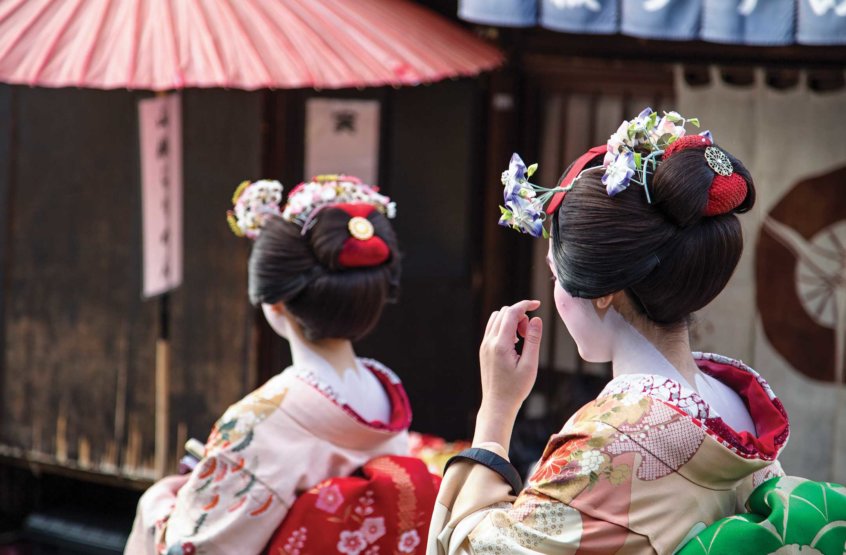 Most people do not really know Geisha beyond their elaborate kimonos. Many can recognize one from a mile away, but apart from the white makeup and the intricate hairstyle, there is very little that is known about them. We take a closer look at the intriguing world of the Geisha and the Geisha-in-Training, the Maiko. 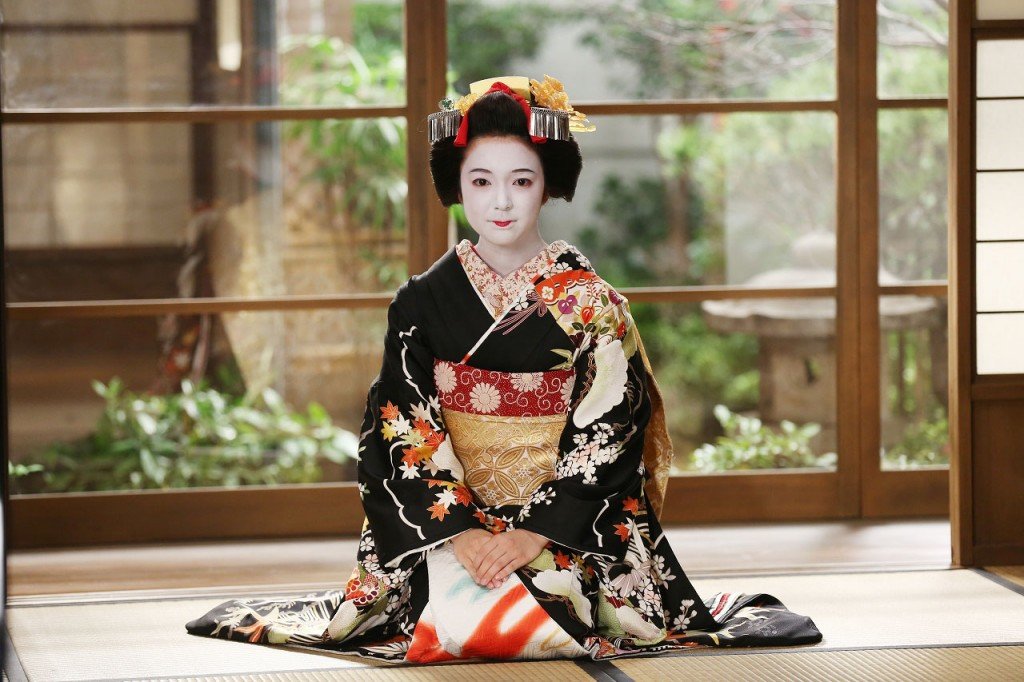 What is a Geisha?

The word Geisha consists of two Kanji,芸 (gei) meaning “art” and 者 (sha) meaning “person”. In Japan, a Geisha is a hostess who is adept in traditional arts such as classical music, poetry, dance and the like. They are also trained to hold conversations, tell jokes and play games. Geishas are basically entertainers but they also play a paramount role in Japanese culture. These women are adored for their beauty, grace, and mystery and are one of the most recognizable figures of Japanese culture.

Kyoto is considered to be the birthplace of the Geisha culture. (In Kyoto, they call Geiko (芸妓) for Geisha. This is a honorific term for sophisticated woman who has education and performing art skills in Kyoto. Basically Geisha and Geiko are the same term).  The first ever Geisha can be traced back to as early as the late seventh century but the Geisha culture was only able to gain traction throughout the nineteenth century, where it enjoyed a golden age of popularity. This steady rise abruptly came to a halt when World War II destroyed Japan, but after the warfare, the women who returned to their lives as Geisha, fought for the improvement of their rights as they continued their craft. This was also the turning point where Geishas completely diverged from the notion that they engage in sexual activity for payment from male customers. 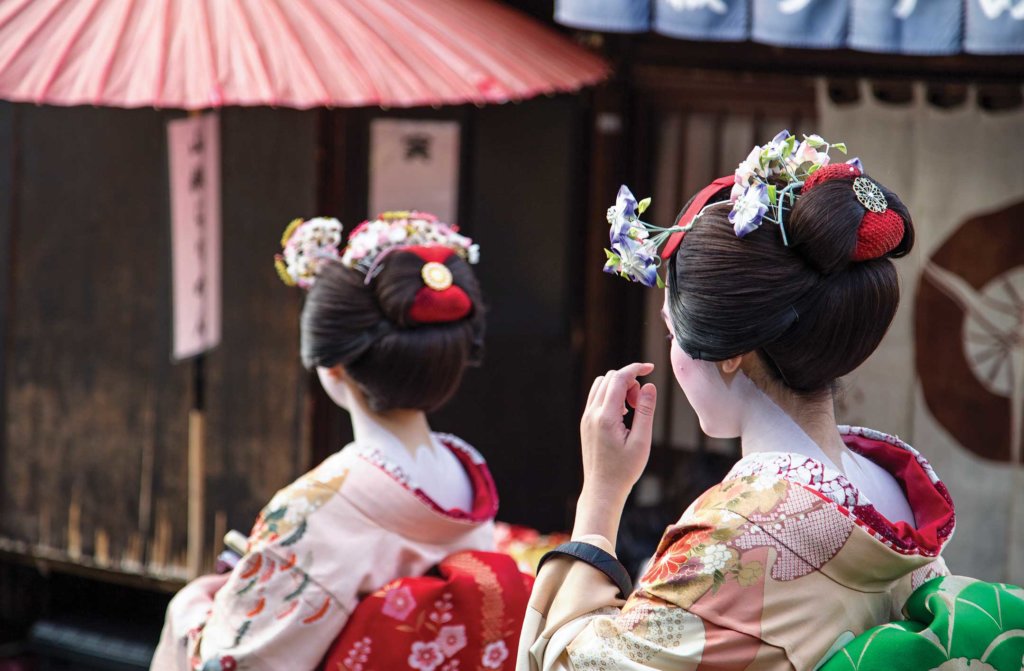 Differentiating the Maiko and the Geisha

The life of a Geisha is often portrayed as glamorous with all the lavish kimonos and the meticulous accessories but before a woman becomes one, she has to go through a painstaking process. A “Geisha-in-training” is referred to as a Maiko, literally meaning “dancing girl” in Japanese. Maikos are usually aged from fifteen to twenty years old and they undergo about five years of mastering various art forms before being considered a Geisha.

At first glance it can be difficult to point out the difference between the two but with further attention to detail, one would notice that the master can really be set apart from her apprentice. For example, Geishas wear wigs on top of their natural hair while Maikos style their own hair into these grandiose arrangements. It is also noticeable how Maikos wear more elaborate hair accessories like silk flowers while Geishas can be seen opting for simpler ornaments on their heads like decorative combs. When it comes to make-up, Maikos’ eyebrows are often colored with red or pink, while their eyes are outlined in red and black. In their first year of training will have only their lower lip painted red, while in the more advanced part of the training  both lips will be painted. Geishas on the other hand, style their eyebrows with only a touch of red and both their lips are painted bright red. If you give attention to their clothes, Maikos often wear brightly coloured, long-sleeved kimonos with wide obis that are arranged into bows at their backs. Since the Geishas are older and more mature, they are often seen wearing kimonos in solid or subdued colors.

In an internet forum, one brave ex-Maiko revealed the many secrets of this mysterious world. She shared the difficulty of training to be a Geisha. Many of her batchmates quit because of the strict rules of the Okiya. It would impose rigid curfews and romantic relationships are forbidden. An Okiya is the boarding house in which Maikos live. The house is headed by the Okā-san (the Japanese word for “mother”) or Okami-san (landlady). She usually pays all living expenses, including for kimonos and training. Maikos do not receive a salary while in training. In some instances, the Okā-san of the Okiya may adopt one of the geishas as her daughter (musume) and heiress (atotori) and she gets to live in the Okiya permanently.

The situation in most Okiyas are not ideal. Maikos may have to share double deck bunk beds. They also need to do chores as well as see to the needs of the Senior Maiko. Most Maikos begin their career at fifteen or sixteen. The training prior to becoming a Maiko takes about 6 months to 1 year to complete. They then spend 4 years training as a Maiko. They then “graduate” at the age of 20, to be a Geiko/Geisha.

Not everyone can be chosen as a Maiko especially in terms of height. One should be between 150-165cm. Any taller would no longer be considered cute or “kawaii“, a characteristic that is highly prized in the Japanese culture.

You might spot Maiko in the street of Kyoto, but if it’s during the daytime, most likely they are pretend Maiko, because real Maiko walk outside only evening/night time.

Geisha Culture in the 21st Century

It is now possible for tourists to meet Maikos and Geishas face-to-face. Though they are most often hired to entertain the wealthy at exclusive parties, you can still see them in action during spring dances or Miyako Odori: a yearly performance of traditional music and dance in Kyoto. Another option is to reserve a private audience with a Maiko, during which you will be able to chat with her through a translator and be entertained with traditional games and dances.

I recently saw a Maiko performance in Kyoto. Videos were not allowed during the performance but at the end of the show, the audience were allowed to ask questions. Here’s a video of the interview.