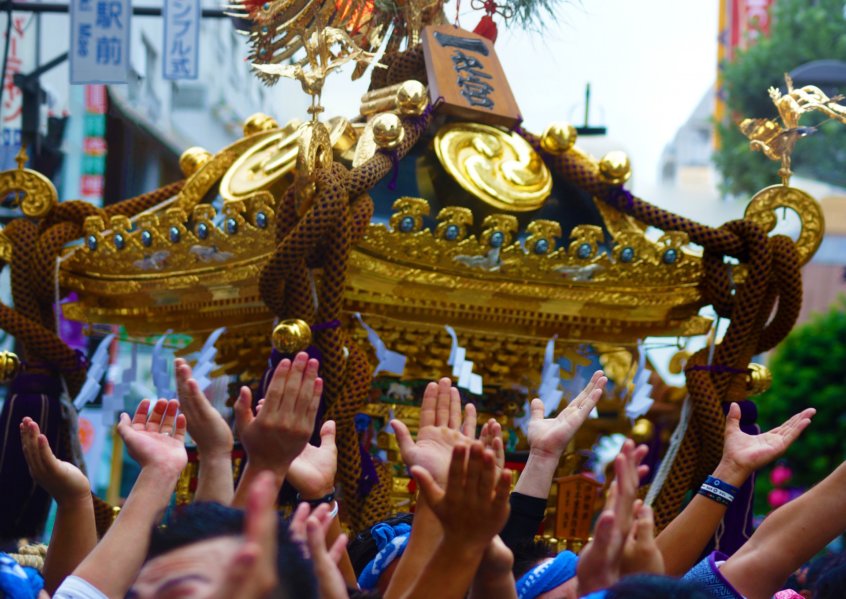 Omatsuri (festivals) are an important part of Japanese culture. In fact, it is said that there are so many festivals held in Japan, that at any given moment, there is a festival happening somewhere in Japan! Some festivals are calm and respectful, while others are lively events attended by millions of people! Here is a list of the 10 most popular festivals in Japan.

Kanda Matsuri originated during the Edo Period. Tokugawa began to rule the country from Edo (present-day Tokyo), and the festival was celebrated as a demonstration of prosperity under the new regime. At the time, the Kanda Matsuri and the Sanno Matsuri were the only two festivals that were allowed to pass through the Edo Castle grounds. Both were originally held annually, but after competition grew incredibly intense, they were eventually ordered to be held in alternating years.

Today, Tokyo’s Kanda Matsuri consists of numerous events held over an entire week, and is attended by millions of people. The highlights are a day-long procession through central Tokyo on Saturday, and parades of portable mikoshi shrines by the various neighborhoods on Sunday.

When: Middle of May on the even-numbered years

This is another one of Japan’s three greatest festivals, held every year at Osaka Tenmangu Shrine, which is located in the heart of Osaka City. It originated back in the 10th century, in the year 951, as a celebration dedicated to Sugawara Michizane, the Japanese deity of scholarship and learning. The two-day festival features a lively procession through the city, with musical performances and dancers. The main event of the festival takes place on the second day, with a procession of boats on the river and massive fireworks as the grand finale.

When: Middle of May on the even-numbered years

Kyoto’s Gion Matsuri is counted as one of three greatest festivals in Japan. This traditional festival began in 869 as a religious ceremony to appease the gods during the outbreak of an epidemic. Gion Matsuri is centered around the Yasaka Shrine, the famous shrine in the Gion area. The festival actually takes places over the entire duration of July, but the main ceremonies take place on July 17th (Sakimatsuri) and July 24th (Atomatsuri), marked with a grand procession of floats.

When: Every year in July

This is a famous ice-sculpture festival held annually in Sapporo, Japan, over the course of seven days in February. This is one of the largest and most distinctive winter events in all of Japan, as every year, it draws an astounding about 2 million people. During the festival period, the main venues of Odori Park, Susukino, and Tsudome are filled with over 400 snow and ice sculptures varying in size – some are the size of people, and others, as big as entire buildings. An International Snow Sculpture Contest has been held at the Odori Park site since 1974, and teams from various regions of the world all come to participate.

This is Japan’s largest and most famous traditional dance festival, which takes place on the streets of Tokushima City in the summer. This festival attracts more than a million people to gather and unite in a series of fun, traditional dances. The event typically also features traditional costumes such as kimonos and straw hats, and hours of energetic singing, dancing and chanting. Whether you are dancing or just watching, it is a truly incredible and entertaining sight!

The Danjiri Matsuri is  a harvest festival that is held to pray for a good autumn bounty. They are held all over Japan in the fall, but the most famous one takes place in Kishiwada, South Osaka. The Kishiwada Danjiri Matsuri is a fun, powerful celebration, and also known for being quite dangerous. A danjiri is a traditional Japanese wooden float decorated with carvings and lots of ornaments. The wooden floats are made in the shape of a shrine or temple and are pulled through the streets on the festival days. The majority of the floats weigh over 3000 kg and are pulled by an enthusiastic team of up to 1,000 people. All the floats represent a different district of the city, with each districts pride being at stake as each team is competing for victory!

Japan’s biggest tanabata festival is the Shonan Hiratsuka Tanabata Festival. A Tanabata Festival is a traditional annual event in Japan, which celebrates legend of the once-a-year meeting of two lovers who are separated by The Milky Way. The Shonan Hiratsuka Tanabata Festival attracts over 3 million visitors every year. During the festival, the streets are decorated with loads of colorful, gigantic tanabata ribbons and banners, and hundreds of stalls selling traditional festival snacks and drinks. Hiratsuka City is in Kanagawa Prefecture and can be accessed within 1 hour from Tokyo.

Naked festivals are held in dozens of places throughout Japan every year, usually in the summer or winter. The most famous festival is the Saidai-ji Eyo Hadaka Matsuri held at Saidaiji Temple in Okayama, where the festival originated over 500 years ago. Nearly 10,000 men wearing only traditional loincloths called fundoshi first purify their body with cold water, and then battle to grab a pair of sacred sticks (called shingi) thrown from the top of the temple. Whoever catches the shingi will be regarded as the “lucky man” and blessed with a year of good luck and happiness.

When: Third Saturday of February

The Hakata Gion Yamakasa (博多祇園山笠) is one of the most interesting and vastly popular festivals in Japan. It is held every year during the first half of July and features an incredible race on the morning of July 15. In the race, seven neighborhoods of Fukuoka’s Hakata district compete by pushing massive, beautifully decorated festival floats along a 5-kilometer race through the city. Almost one million spectators gather to watch this classic annual festival, which is centered around Kushida-jinja Shrine. The festival is believed to be over 770 years old and was designated an Important Intangible Folk Cultural Property of Japan in 1979. Aside from the main day, smaller events run for two weeks prior to the race.

When: Smaller celebrations from July 1-14, main day is July 15