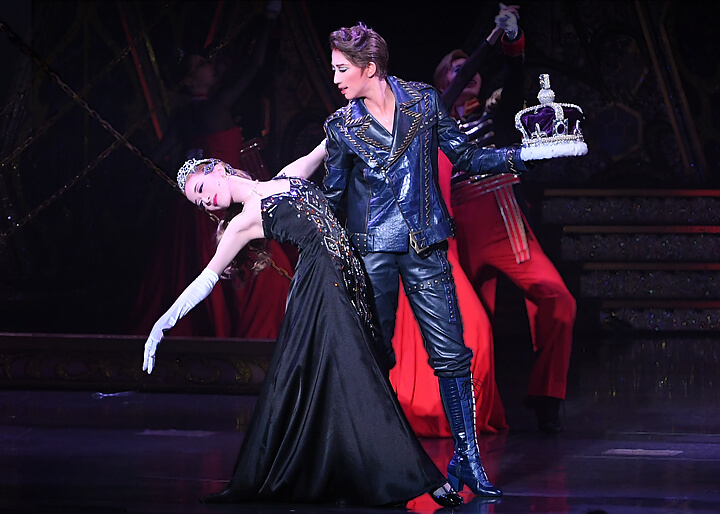 Japan’s famous Takarazuka Revue (宝塚歌劇団) is an all-female musical theatre troupe based in Takarazuka City, Hyogo Prefecture. The theatre puts on massive, colorful, Broadway-style productions of Western musicals and famous Japanese plays. All roles are played by women, and these “Takarasiennes” famously claim to “sell dreams”.

The Takarazuka Revue was opened in 1914 by a Japanese businessman named Ichizo Kobayashi. Kobayashi was, and still is, well known for contributing to the growth of the Hankyu Railway, opening the Hankyu Department Store as Japan’s first department store built inside a train terminal, and to help found the Toho Group.

In 1911, Kobayashi first created the Takarazuka Shin-onsen hot spring resort as a way to lure passengers onto his trains. The resort included Paradise a Western-style two-story building featuring an indoor pool. However, Paradise was forced to close after only two summer months, so Kobayashi decided to turn the location into an entertainment hub instead. A lid was placed over the indoor pool to serve as audience seating, and the changing rooms were converted into a stage. The first performance was on April 1, 1914, and featured 17 young girls ranging in age from 12 to 17. 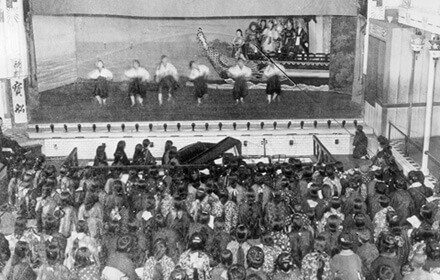 By 1923, the theatre put out the first Revue in Japan, and after the 1927 performance of “Mon Paris”, the Revue became a national phenomenon. In the decades that followed, the Takarazuka Review has continued to grow in both size and popularity – the theatre has added professional training, more members, bigger stages, grander sets, and even another location in Tokyo.

Apart from the greater production scale and increased notoriety, the Takarazuka Revue has not changed too much over the years. To this day, the Takarazuka has firmly stuck to founder Ichizo Kobayashi’s motto of  “modesty, fairness and grace”, and aimed to meet his goal of offering “popular theatrical entertainments the whole family is sure to enjoy.” 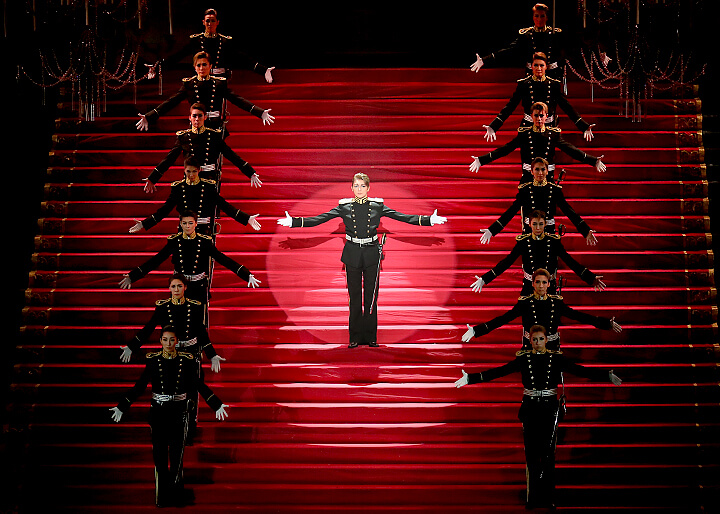 The Takarazuka Revue’s fame can be attributed to its incredibly talented female performers. While its first-ever production in 1914 consisted of just 17 young women, today the company is made up of hundreds of members that put on performances across the country and even abroad year-round. Every year, thousands of teenage girls apply to join the Takarazuka Music School, but the company only accepts 40 to 50 new students a year.

Those lucky enough to be accepted will then undergo two years of intense training. Younger students must walk along the edges of the school’s corridors, and bow and greet any older students they pass. Student’s daily lives consist of taking classes in acting, singing, dancing, music and theater history, as well as cleaning the dorms and classrooms.

After the first year of training, students choose whether they want to be a male role or a female role. The choice is determined by height, build, vocal range, personality and other factors. After choosing, their second year of training is dedicated to perfecting their abilities to master the “gender” as best they can. Once training is complete, students graduate from the school and join one of the troupes. 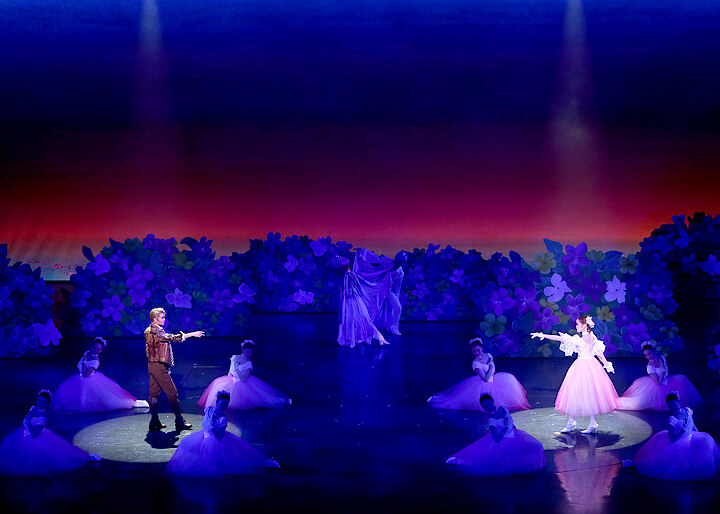 The members of the Takarazuka Revue are all unmarried women. These women play male roles in addition to female parts. The male roles are called “otoko yaku,” while their female counterparts are “musume yaku.” The otoko yaku typically have short hair, stronger physical builds, deeper vocal ranges, and the ability to imitate a male speaking voice. The musume yaku usually have long hair, feminine voices, high vocal ranges, and a pure, innocent atmosphere. Onstage, it is very easy to tell them apart by their appearance, which differ drastically in makeup, mannerisms, and dress. Takarasiennes typically select a “gender” while they are students and stick with it, but some members do switch roles mid-career. 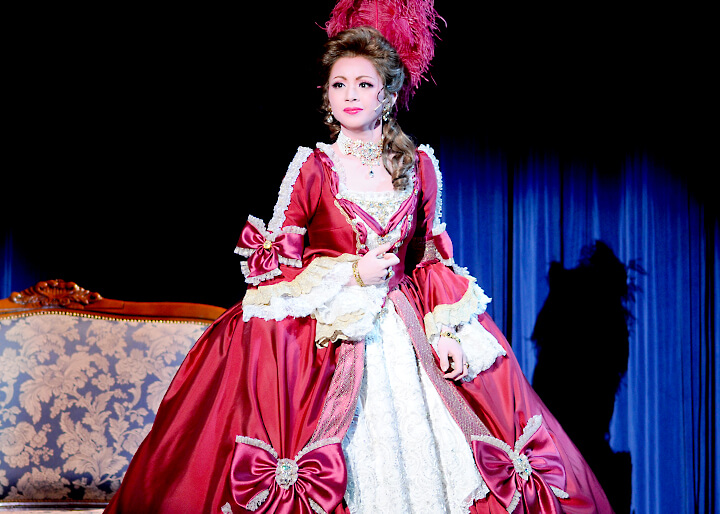 Takarazuka’s claim to fame is the female performers’ ability to portray both the sweet, pure woman alongside the smoldering, masculine man. Despite the fact that they are actually women, those playing otoko yaku wear an air of male sexuality. This is further emphasized by the sweet femininity of the musume yaku. The combination of the two roles is one of the theater’s great appeals.

In particular, it is the “cool” otoko yaku roles played by women that have received national attention, as they which are unique to the Takarazuka Revue. The performers spend hours training to perfect their portrayals of men, down to even the subtle details in their expressions, gestures and walks. The goal of the women playing the otoko yaku is to embody the ultimate cool, dreamy, powerful, romantic masculine figure, even moreso than real-life men. It is said that because women know what women fantasize about, they are able to portray the “ideal” man. 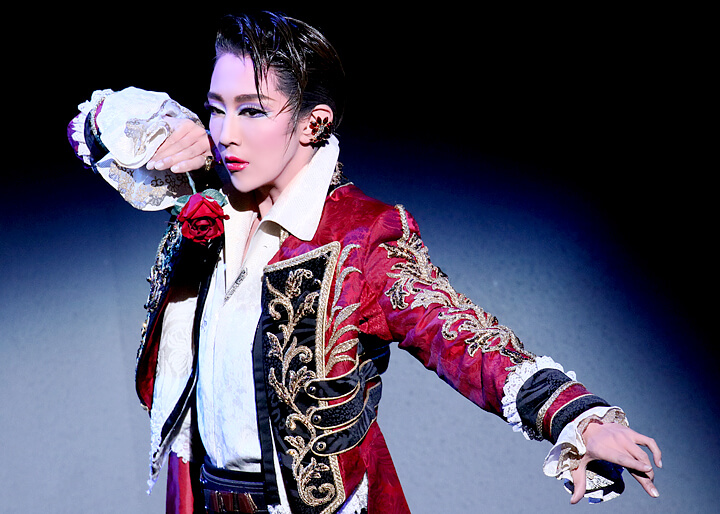 The Takarazuka Revue’s members presently comprise of five separate troupes—Flower, Moon, Snow, Star and Cosmos—and the Senka, or “Superior Members.” Each performance is conducted by one of these groups. Each troupe has over 80 members, also known as Takarasiennes, with a main “male” otoko yaku and a female musume yaku lead who are the faces of their troupe. The best otoko yaku is called the “top star” and the lead musume yaku is called the “top musume yaku”. The plots of many performances center around this top pair, with the rest of the members of the troupe playing supporting and background roles. 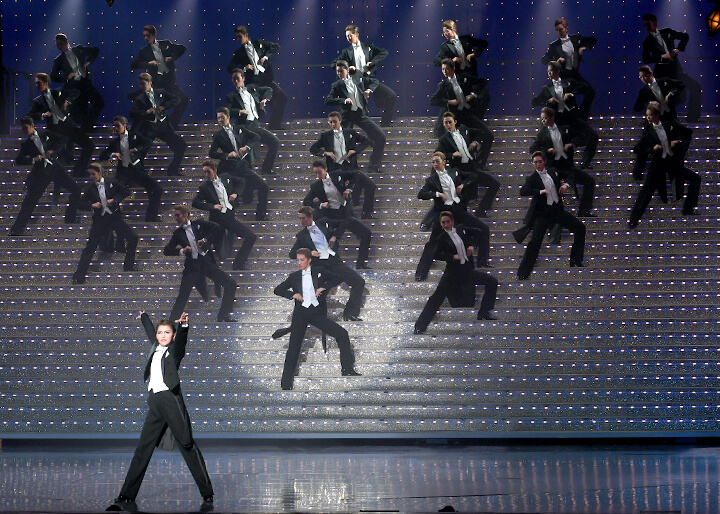 The Senka, or “Superior Members” belong to no one troupe. They are a group of specialists who appear in any of the troupes’ productions as needed. They add a new twist when they join a performance, and also to help instruct the younger Takarasiennes. The Senka members are like the “veterans” of the Takarazuka. 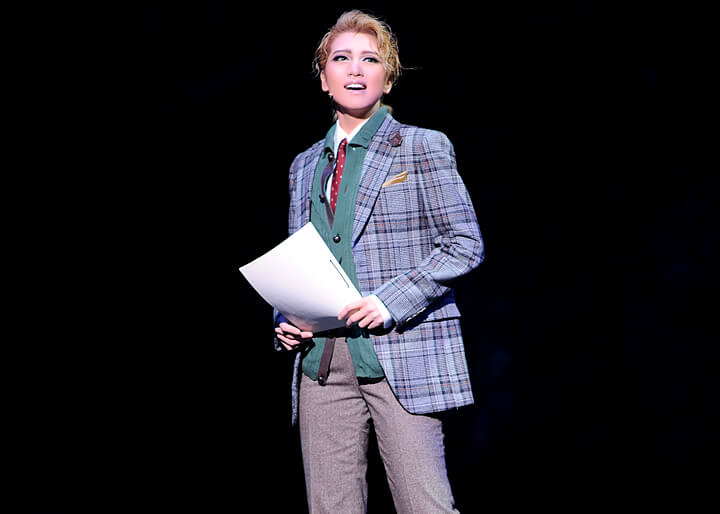 In addition to the productions at these three theaters, the Takarazuka Revue also does traveling tours across Japan, and even in recent years, performances abroad as well.

The Takarazuka Revue’s Grand Theater in Hyogo is the company’s headquarters. The massive stage is like home to these performers, and has become iconic for fans as well. Over the years, the Takarazuka Grand Theater has been renovated to accommodate bigger crowds, grander performances, and more elaborate sets. Today, the stage contains a large “Ginkyo”, or “Silver Bridge,” which is an apron stage used during plays. An orchestra box is set up between the stage and the Ginkyo, where live music accompanies every production. Unlike the all-female performers, the orchestra consists of both male and female musicians. 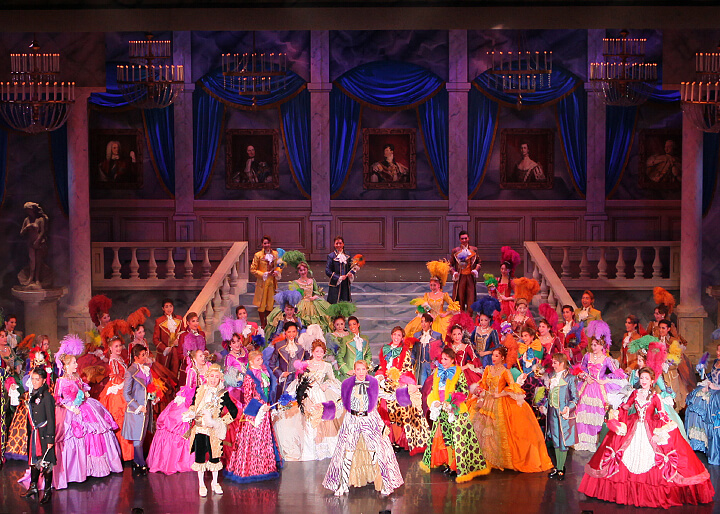 The stage also holds many complicated contraptions which help enhance the performances. There are 8 small and large trap doors called “seri,” by which the performers rise up from below. The “bon” makes the center of the stage rotate like a merry-go-round. Most notably is the giant light-up staircase used in the climax of every performance. The 26-step grand staircase has become a symbol of the Takarazuka Revue, and when its lights go on, it is a sight to behold. 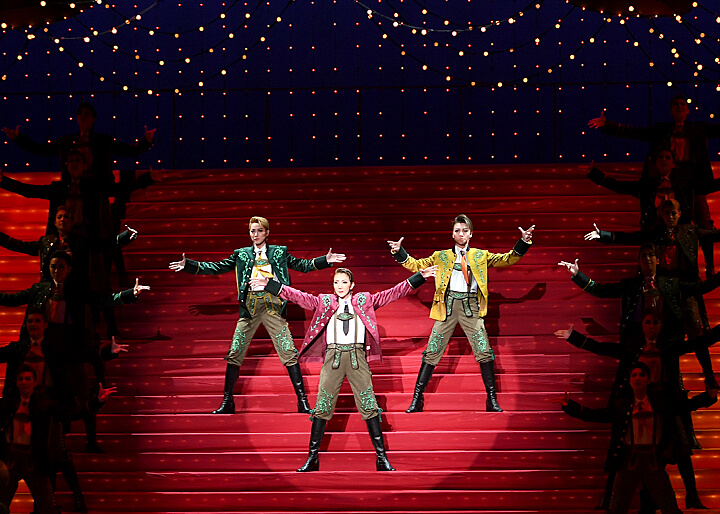 The performances usually consist of two parts: a play and a show. The “play” part is based on a well-known award-winning Japanese or overseas musical, novel, movie, or theatrical play. Notable productions include adaptions of Pride and Prejudice, Casablanca, Phantom of the Opera and King Arthur. Although many of the Takarazuka’s plays come from abroad, all of the performances are completely in Japanese. 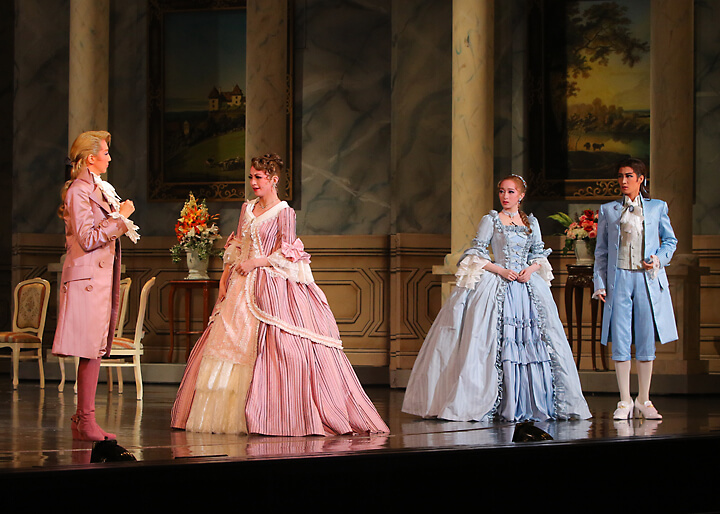 Part one, a play: “The Rose of Versailles”. (Photo: Takarazuka Revue Official Site)

The second part is the “show”, or revue, which is mostly singing and dancing. The show features dazzling dresses and props almost straight out of 18th-century Paris. All 80+ members of the troupe come onstage at once in a glittering spectacle of song and dance. The top stars famously wear massive feather decorations on their backs, which are both incredible as well as heavy, as they weigh an average of 20 kilograms. Shows always incorporate the Takarazuka’s famous grand staircase of 26 steps at the climax, where performers descend the steps without looking down.

Both parts of the performance are essential to the Takarazuka experience. The play serves to evoke emotion, wonder, romance, and imagination. The show is a dazzling display of lights and dancing. The two combine to give you entertainment at its finest! 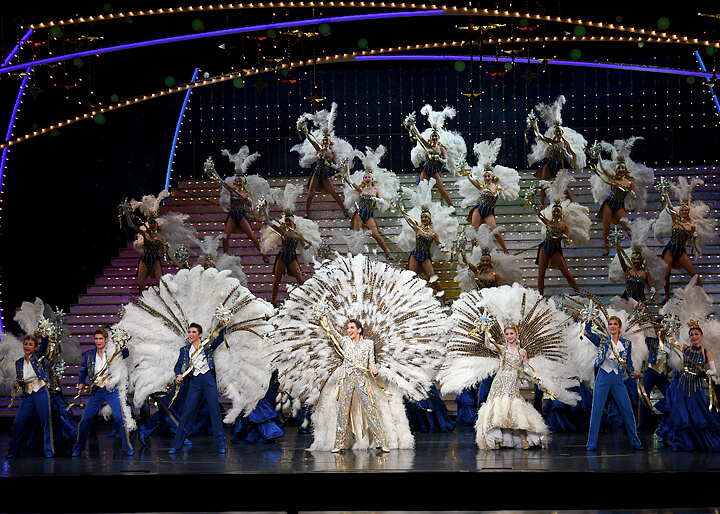 The Takarazuka Revue has many die-hard fans. The vast majority of the fans are female, and most are under thirty. The stars that the fans adore the most are the otoko yaku, the people who play the male parts. The most successful “top stars” in particular have hundreds of fans who praise them for their suave strength and coolness. 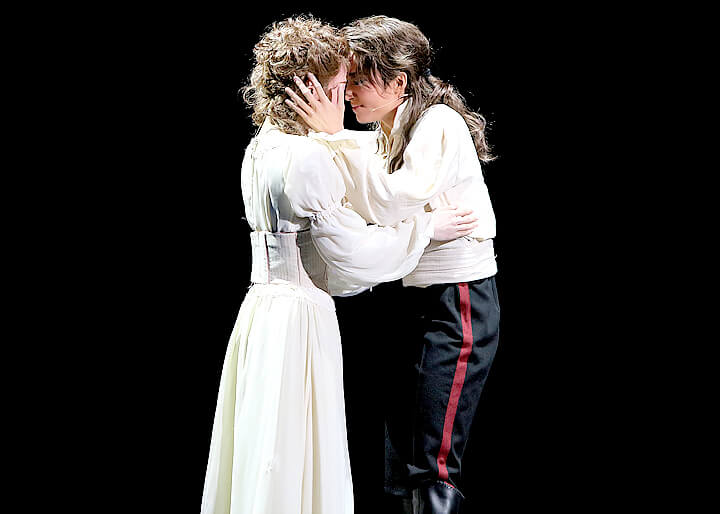 Fans adore the top stars, who are the faces of their troupes. (Photo: Takarazuka Revue Official Site)

Some fans demonstrate their loyalty to a particular performer by joining her fan club. Much like fans of professional sports’ athletes, Takarazuka fan club members can be identified by wearing scarves of a particular color or even jackets embroidered with a star’s name. After performances at the Takarazuka Grand Theatre or Tokyo Takarazuka Theatre, as many as several hundred fans gather in their various club groups and line up on either side of the street in front of the theatre. These fan-meets are quite orderly, as theatre officials oversee the assembly and even set up barricades. 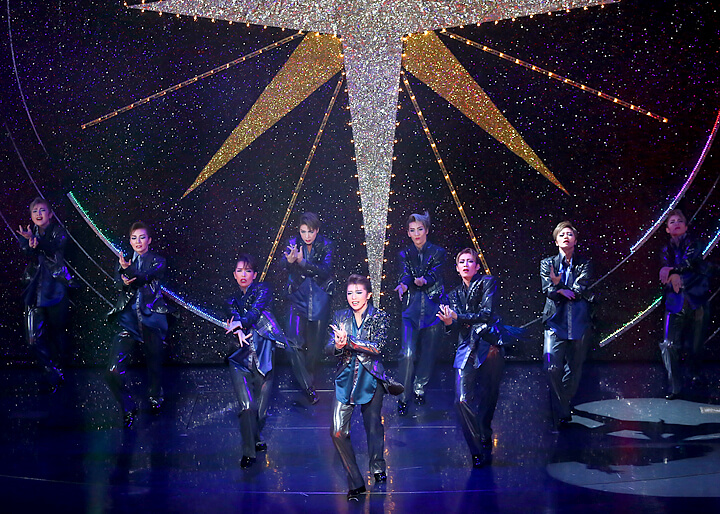 Whenever an actress exits the theatre, fans often gather and wait for their favorites to exit the theatre. The stars come out of the building one by one, some by themselves, but most are accompanied by staff members of their club. The performers have now changed into their normal clothes of slacks or jeans with high heels, and sometimes even hide beneath hats and sunglasses. After exiting the theater, they walk over to their fan clubs. Rather than asking for autographs, the fans actually present cards they have made, which are collected by the star. In August 1940, the actresses were even forbidden to answer fan mail and socialize with their admirers. In the years since then, the regulations have relaxed but not by much. 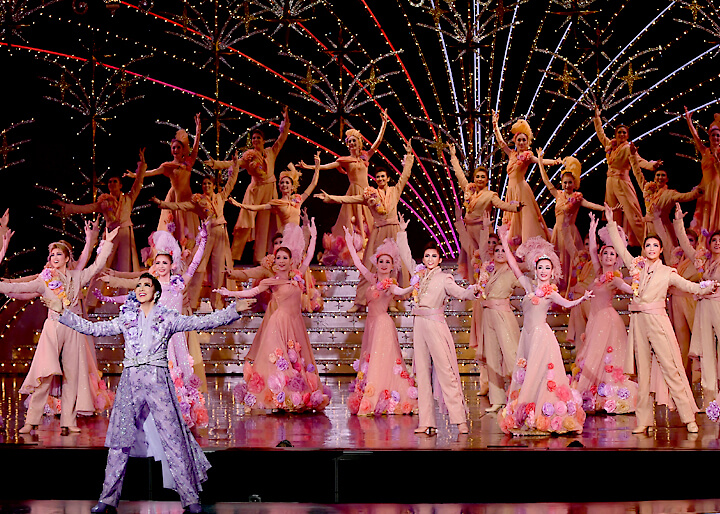 Takarazuka continues to be beloved by fans and known across the country, as it will likely continue to be for decades to come.  If you visit Japan, it is definitely worth paying a visit to see this unique theatrical performance.