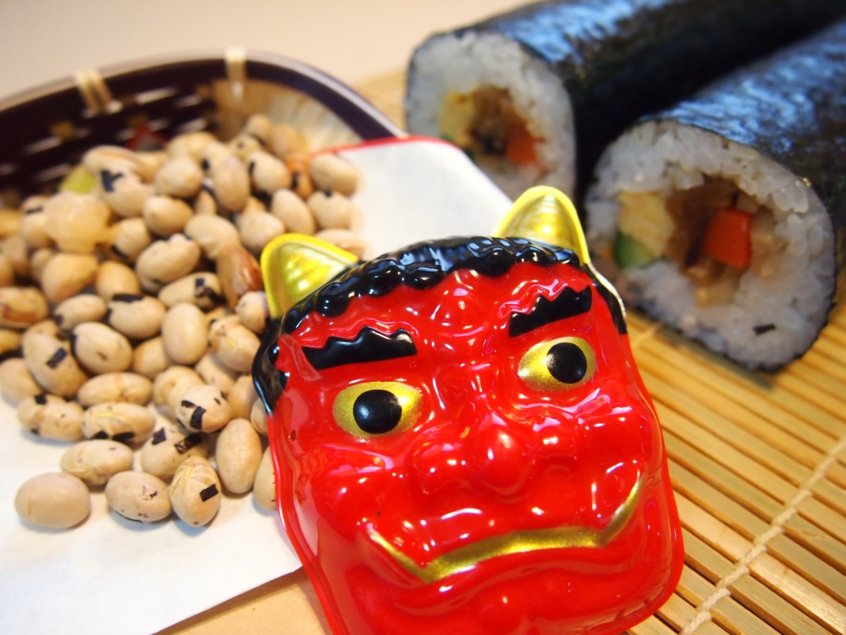 In just a few days, everyone in Japan will be celebrating a holiday called Setsubun, which involves people throwing roasted beans at people wearing masks in a ritual meant to ward off evil spirits! Here’s everything you need to know about Japan’s centuries-old Setsubun holiday.

Setsubun (節分) is held every year on February 3rd as part of the Haru Matsuri “Spring Festival” (春祭) to celebrate the beginning of spring in Japan. The word literally means “seasonal division”, but the term typically only refers to the spring holiday. As it falls just before the Chinese Lunar New Year, Setsubun was originally thought of as a sort of New Year’s Eve. The rituals associated with Setsubun were first created to expel all the evil of the former year and drive away evil spirits for the year to come. Although Japan’s Setsubun is presently celebrated in many variations throughout the country, it is technically not recognized as an official public holiday. 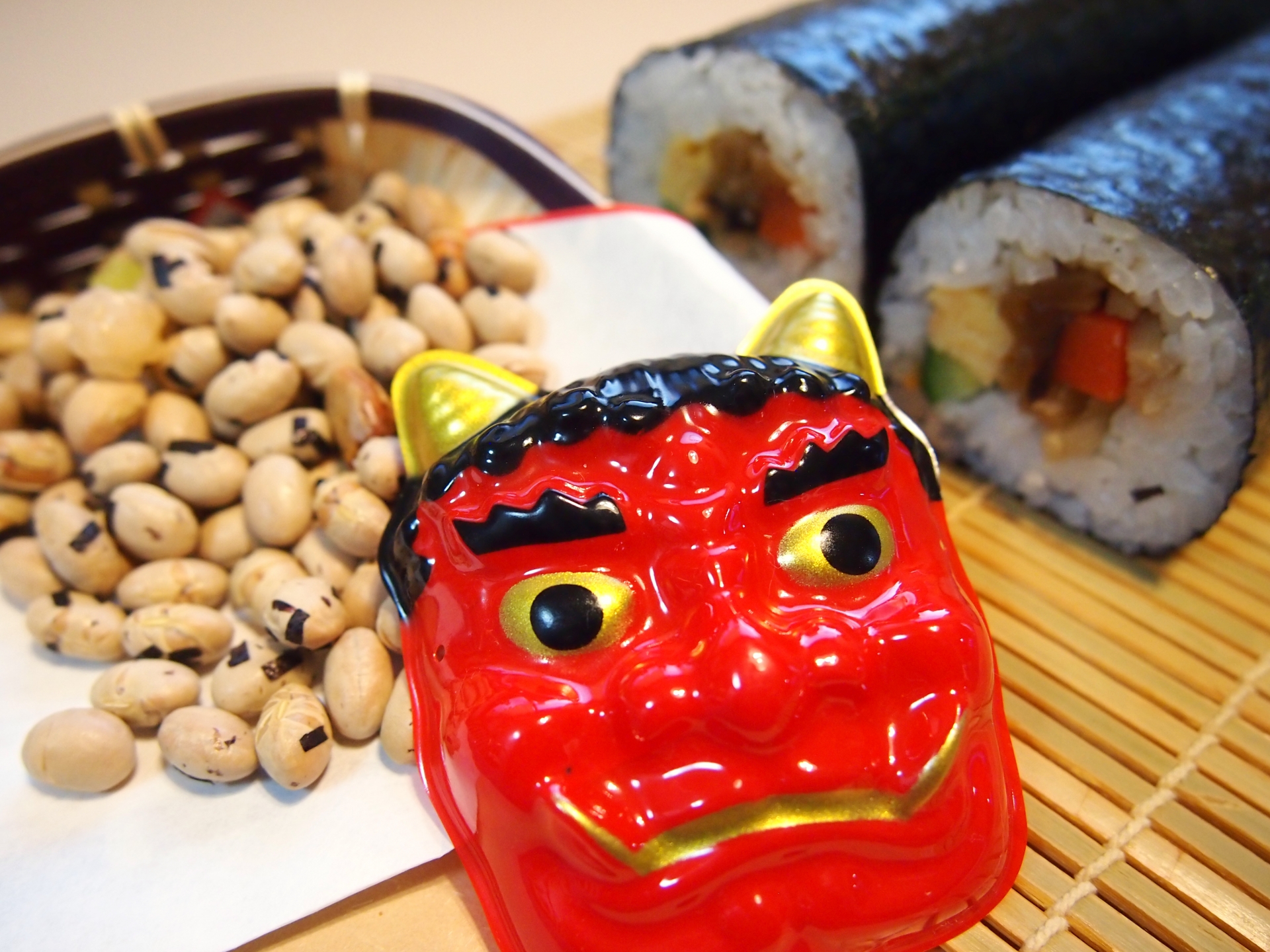 People have been celebrating some form of Setsubun in Japan since the 1300s, when Setsubun was introduced to Japan as the custom of tsuina (追儺) by the Chinese. In it’s earliest stages, Setsubun was considered a sort of New Year’s Eve in Japan. The New Year was considered to be a time when the spirit world became close to the physical world. During this special time, it was important to perform rituals to drive away any spirits from the spirit world that might wander too close to the household.

The most common ritual that has been associated with Setsubun for centuries is the soybean-throwing ceremonies known as mamemaki (豆まき), which first appeared in the Muromachi period. Historically, other customs during this time included religious dances, festivals, and even bringing tools inside the house that might normally be left outside to prevent the wandering spirits from harming them. Although not as common as throwing beans, some families still carry on the tradition of yaikagashi where sardine heads and holly leaves are hung above doorways to prevent unwanted spirits from entering.

In older times during Setsubun, people also participated in role reversal. Young girls would do their hair in the styles of older women and vice versa, and even do some cross-dressing. This custom is still practiced among Japanese geisha, who still participate in these old traditions by wearing disguises or dressing as men when entertaining clients during Setsubun. 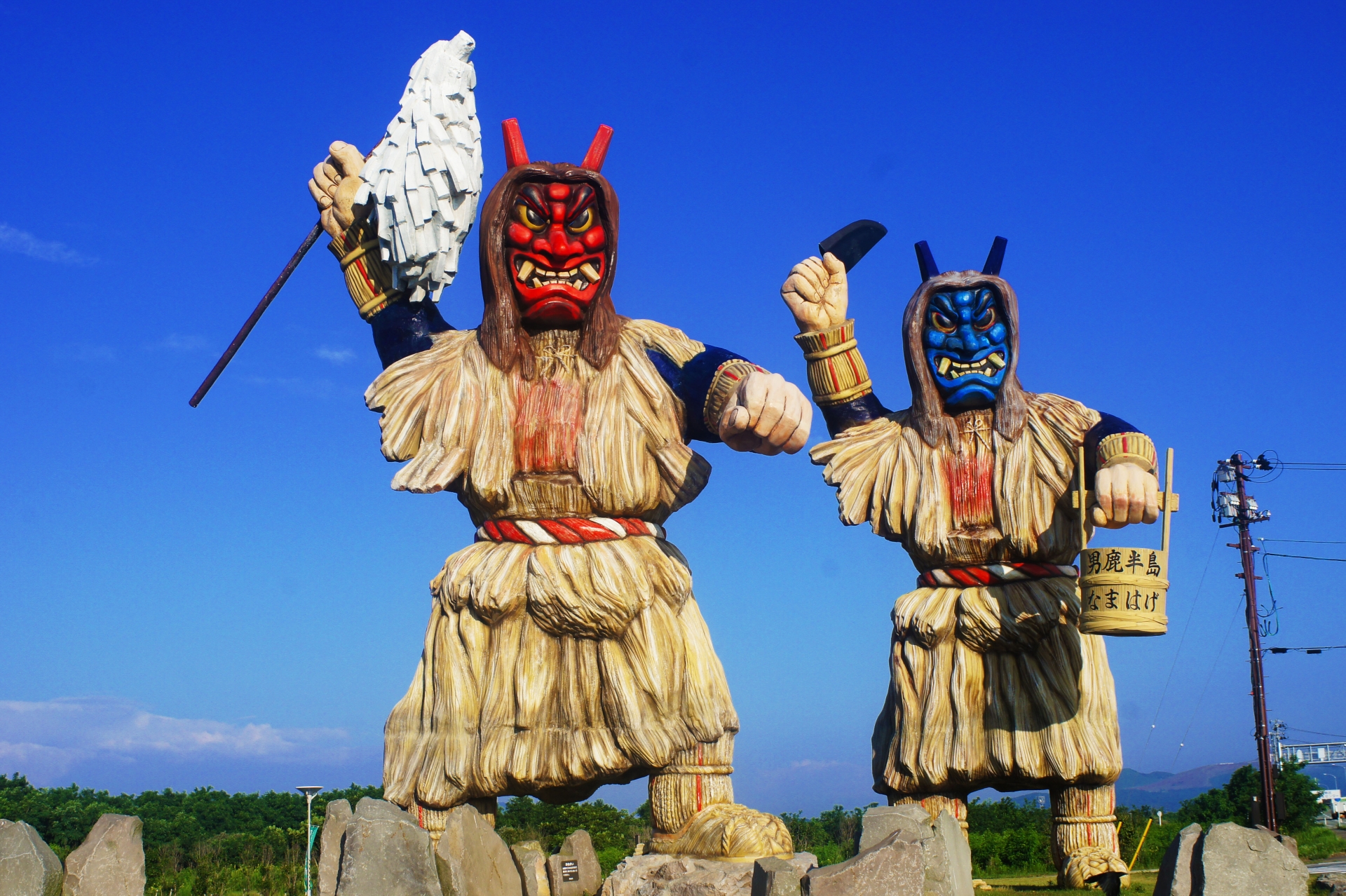 This interesting tradition is the ritual most-commonly associated with Setsubun. It involves a person dressing up as an oni (demon/ogre) and people throwing soybeans at him. If any male members of the family share the same zodiac animal as the new year (making them the toshiotoko 年男), they get to play the role of the oni. If nobody’s animal sign matches, the senior male of the household will play the role. Roasted soybeans called “fortune beans” (fukumame, 福豆) are thrown either out the door or at the member of the family wearing the oni mask. While throwing the beans, people typically chant: “Demons out! Luck in!” (鬼は外! 福は内! Oni wa soto! Fuku wa uchi!).

The fukumame beans are thought to symbolically purify the home by driving away the evil spirits that bring misfortune and bad health with them. Then, as part of bringing luck in, it is customary to eat roasted soybeans. As part of the ritual, one bean is eaten for each year of life, and in many regions in Japan, one extra bean is consumed for good health in the next year.

While the ritual is practiced quite similarly nationwide, there are some notable regional differences. In the Tōhoku area of Japan, the head of the household (traditionally the father) would take roasted beans in his hand, pray at the family shrine, and then toss the sanctified beans out the door. There are also many variations on the famous “Oni wa soto, fuku wa uchi” chant. For example, in Aomori area, people chant “鬼も内、福も内” (Oni mo uchi, Fuku mo uchi!). “Both demon and fortune come in!”

The tradition of mamemaki is still commonly practiced by families in households, but many people attend a shrine or temple’s setsubun festival where this is done publicly. 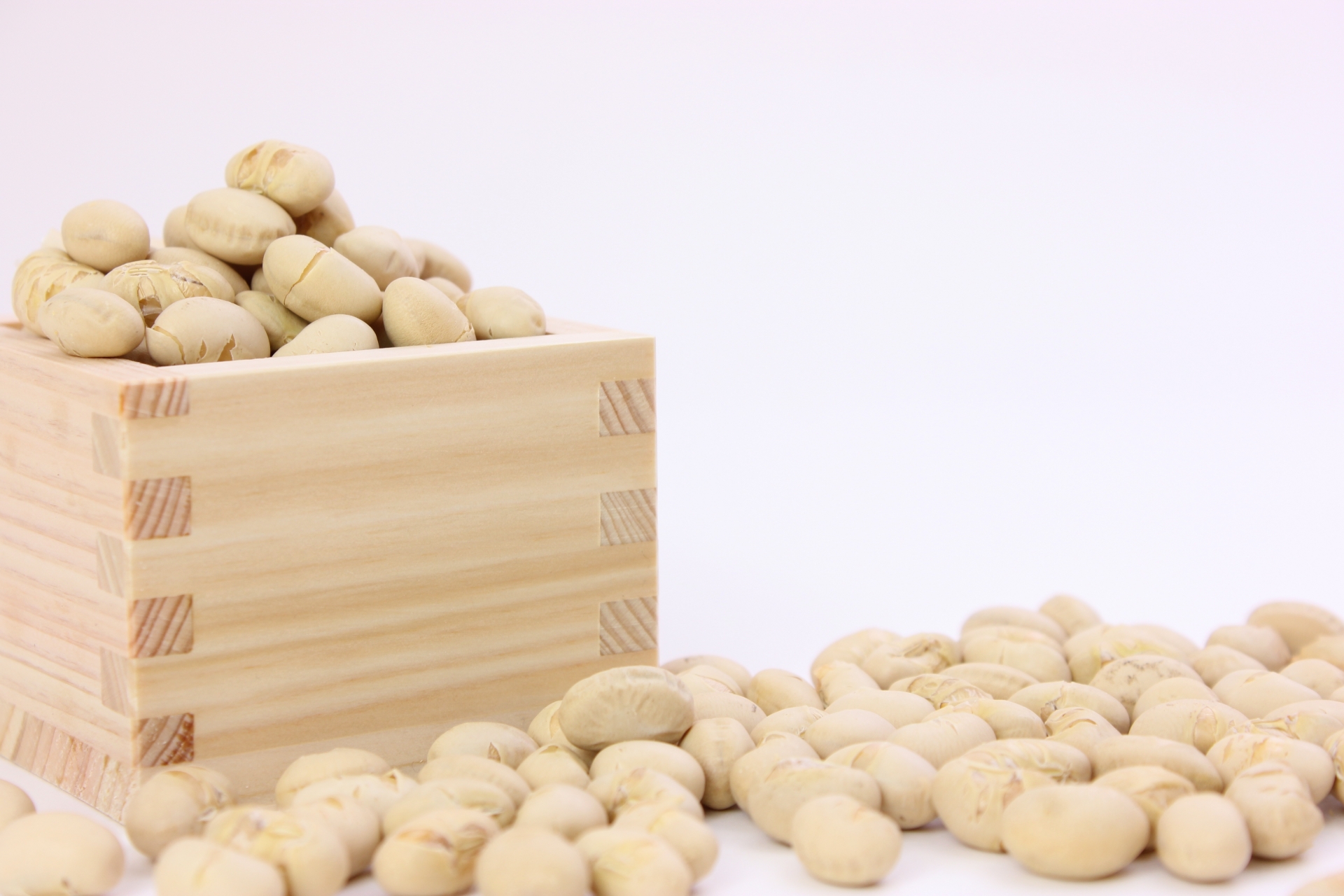 It is customary in Kansai area to eat uncut makizushi called ehō-maki (恵方巻, “lucky direction roll”). The ritual involves eating the entire uncut roll in silence while facing the year’s lucky compass direction, which is determined by the zodiac symbol of that year. The roll is left uncut because it was believed that cutting during the Lunar New Year is unlucky.

This custom started in Osaka, and is associated with the Kansai region of Japan, but in recent years , eho-maki can be purchased at stores in the Kanto area as well. Eating eho-maki is becoming more widely recognized as a part of Setsubun tradition, and this is due largely to the recent marketing efforts of grocery and convenience stores. 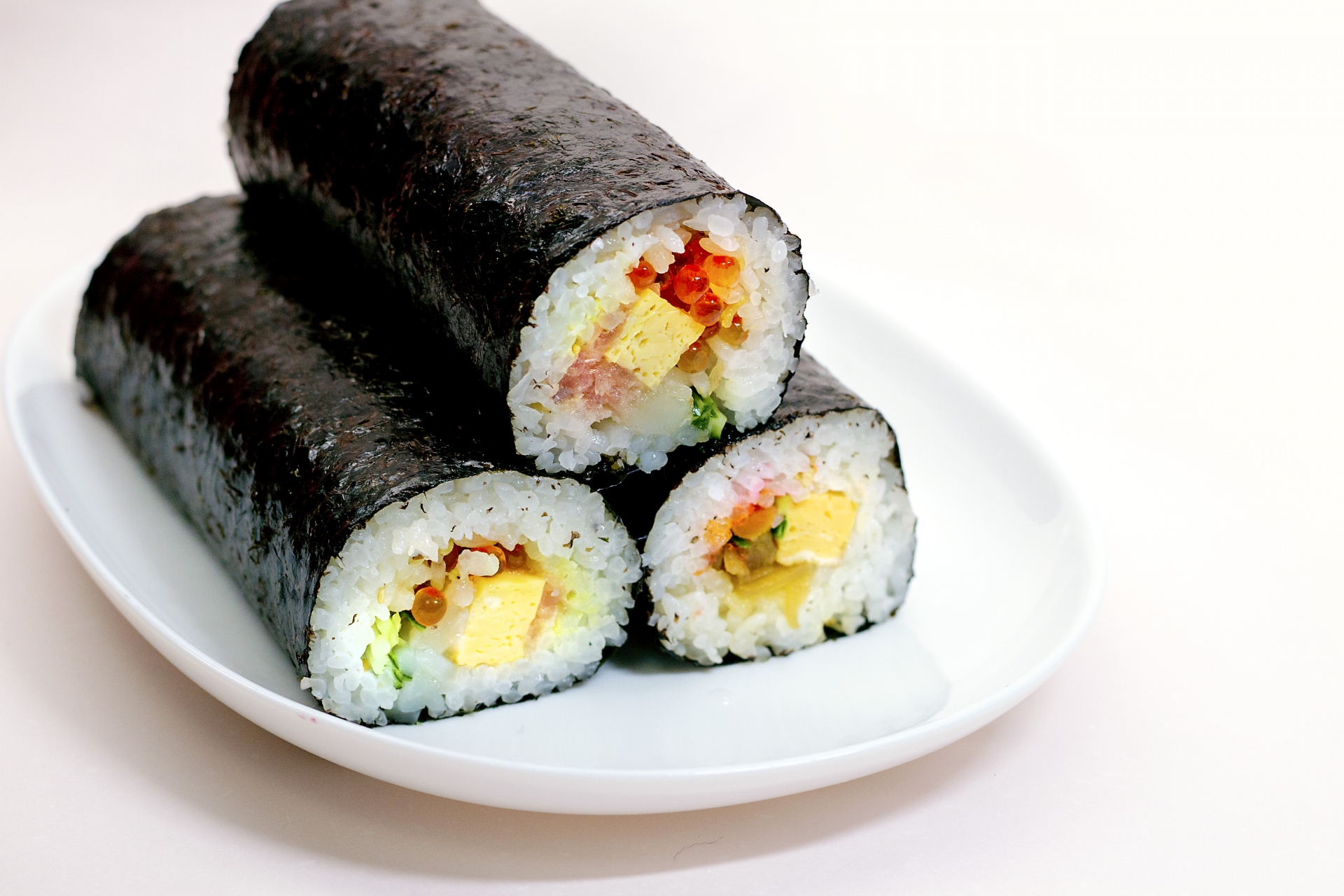 Today, there are celebrations for Setsubun at Buddhist temples and Shinto shrines all across the country. Priests and celebrity guests throw fukumame, candies and other prizes to crowds of onlookers below. At some bigger shrines, where famous celebrities and sumo wrestlers are invited, the events are aired on national television. One of the biggest public Setsubun celebration is at Sensō-ji in the Asakusa neighborhood of Tokyo, where nearly 100,000 people attend every year.

It is nice to see the entire country come together to participate in a custom that has been a part of Japanese culture for many centuries.