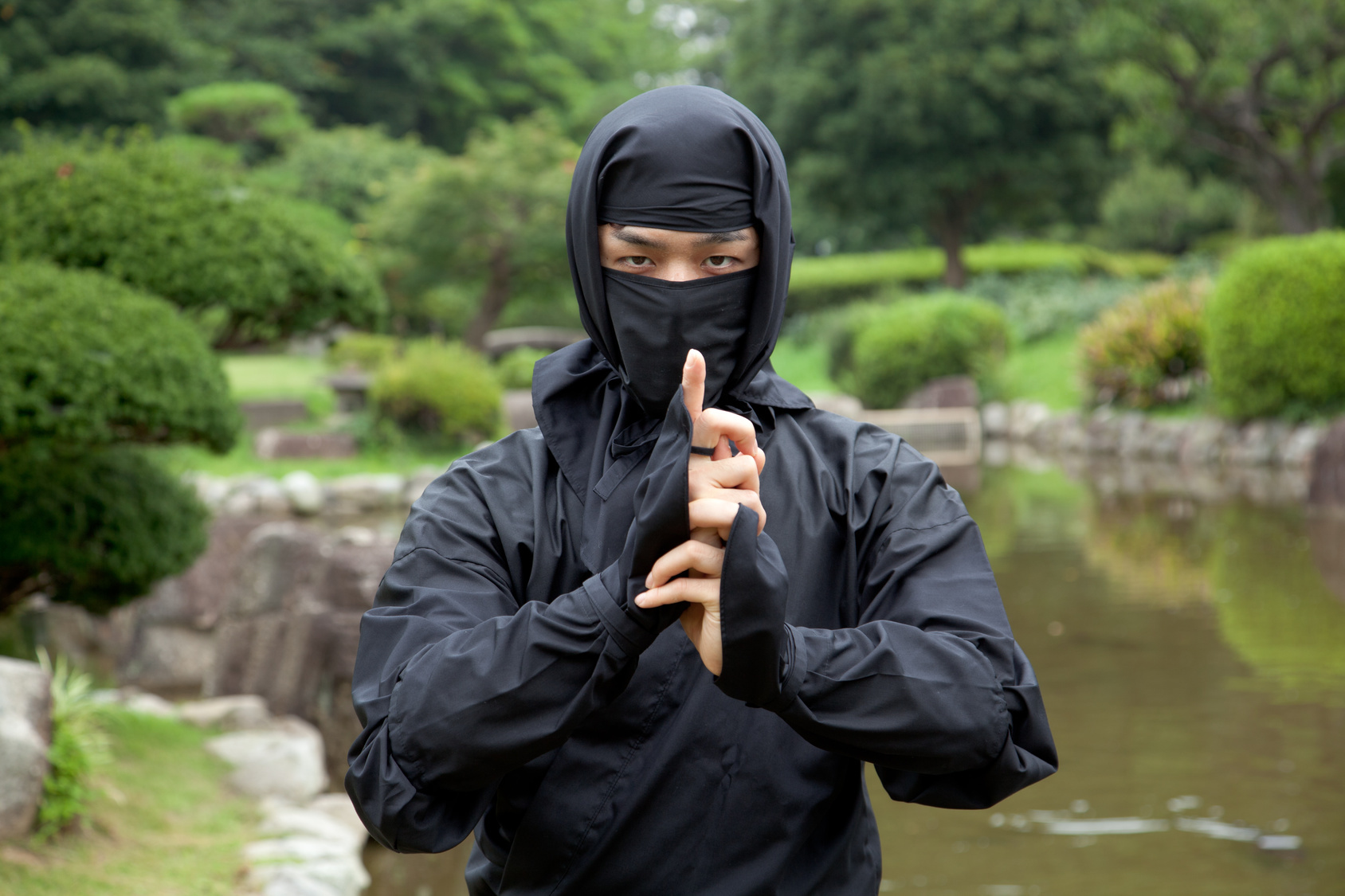 If there was one group of warriors that produced more myth and exaggeration and shrouded in so much mystery, it would be the ninja. The word ninja（忍者, or its alternative name shinobi, appears throughout historical accounts in the context of secret intelligence gathering or stealthy assassinations carried out by martial-arts experts. 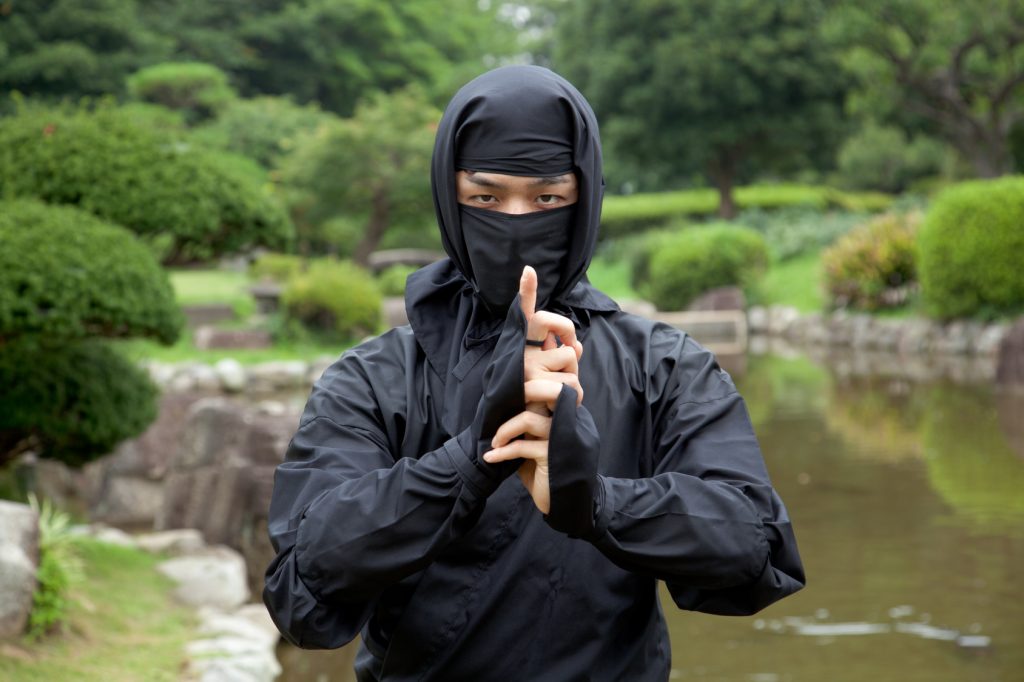 Many opportune deaths may be a result of clandestine activities by ninjas but because they work in so much secrecy it is impossible to prove them. The ways of the ninja are an unavoidable part of samurai warfare, and no samurai can ignore the utility and fear that they represented. However, ninjas were despised because of how they contradicted the samurai code due to their use of secretive and underhanded methods.

In the mid 15th century onward, certain samurai families began to develop particular skills in intelligence gathering during feudal warfare. These were the ninja families. Like so many martial arts traditions in Japan, their skills were passed down from father to son or more usually from sensei (master) to chosen pupil, who may not always have been a relative.

The most celebrated “professional” ninjas were leaders of the provinces in Iga and Koga. They were minor landowners who, just like any daimyo of any size, emphasized the value of family and loyalty. 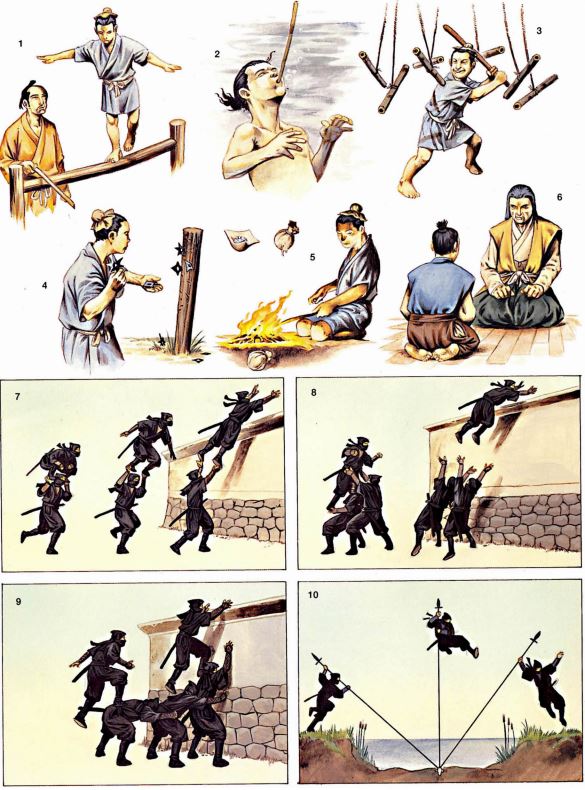 1 – Learning to balance exceptionally well
2 – Breathing underwater using a bamboo tube. This technique will come in handy when hiding underwater for hours
3 – Practicing how to handle a sword
4 – Training to aim shuriken accurately
5 – Survival skills in the mountains
6 – A Shonin (ninja leader) evaluates the trainee before he is sent to his first mission
7 & 8 – Acrobatic skills that allow them the ability to “fly”
9 – Human pyramid technique
10 – Training in using the yari (long spear)

Ninjas often trained deep in the mountains developing superior level of vision to be able to cope with different lighting conditions. They are expected to be able to run fast and jump high. Ninjas would grow bamboo and hemp and would jump over them as part of their exercise. They also need to learn to walk quickly and stealthily and thus developed the “nanba style.”

Important skills would also include mastery of the samurai sword, spear, bow, and is expected to ride well and swim. A young ninja would have a more extensive curriculum, covering skills in explosives, blending of poisons, as well as fieldcraft and survival. He also needed to be in superb physical shape to enable him to scale walls and be an expert in unarmed grappling techniques.

Aside from physical abilities, a would-be ninja is required to develop shinshin-funi (lit. unity of body and mind). Through rigorous training, the ninja learns to stretch the limit of his abilities through perseverance, seishin, and the spirit of wa. A true ninja is an individual with mental and physical soundness, who endures adversity while maintaining integrity, and seeks altruistic harmony with nature and people. 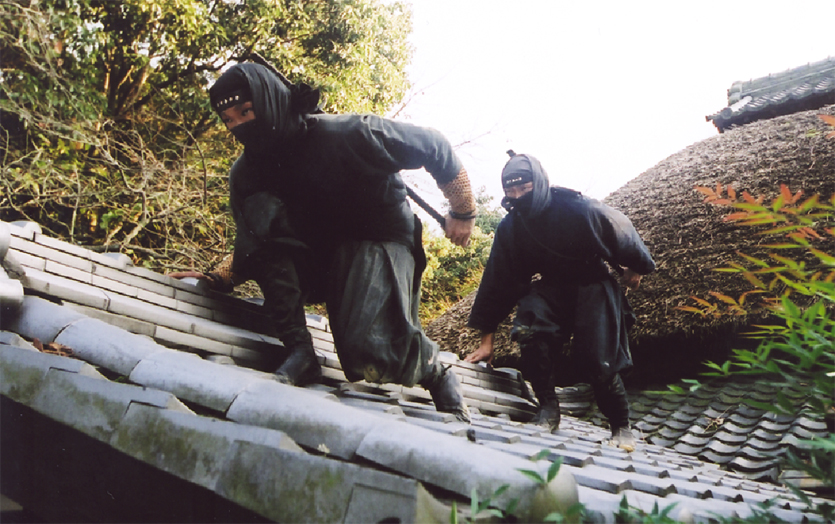 The idea of the ninjas wearing an all black costume is so ingrained in popular culture, but in actuality, they tend to disguise themselves to blend in with the environment or the enemy. Nevertheless, it is obvious that if a ninja was to perform the role of infiltrating a castle secretly at night, then the choice of a very dark costume is a sensible one. However, it is a myth that ninjas wore jet-black clothing. This color can easily be spotted under the moonlight so a dark navy blue dye was usually used.

The ninja costume is simple yet well designed for its purpose. Unlike a judo or karate garb, ninja jackets used no ties to prevent it from being caught by protrusions when climbing a wall. They also tucked the jacket inside their trousers. Just like the samurai, they wore cloth gaiters over their calves, black tabi or Japanese socks, waraji or straw sandals. The biggest difference with a samurai costume however, is that a cowl is wrapped around the ninja’s head, revealing only the eyes. 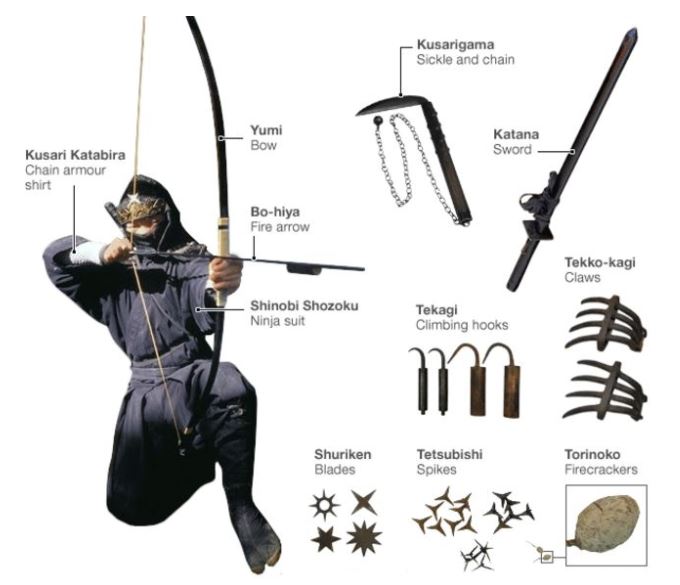 Of all the equipment ninjas carry, nothing is more important than the sword. It is a standard katana, which is designed to be strong and flexible. The ninja used a katana that is shorter and straighter than usual. To make climbing easier, the sword is not placed in the samurai’s traditional placement on the belt, but on the shoulder with the blade edge up and the handle near the left ear.

Shuko
These are small metal plates that act like claws and are worn on the hands with four protruding spikes extending from the palm. A ninja can use it for self defense such as raking an enemy’s face or breaking the jaw with a hard blow. It was also used for climbing trees, scaling walls or crawling on ice much easier and faster.

Shuriken
These are a tiny discs with spikes used for self-defense. Because they are such a small weapons, it is difficult to kill an enemy with a single throw. However, if a strong poison such as aconite was painted on them, then they become deadly weapons. 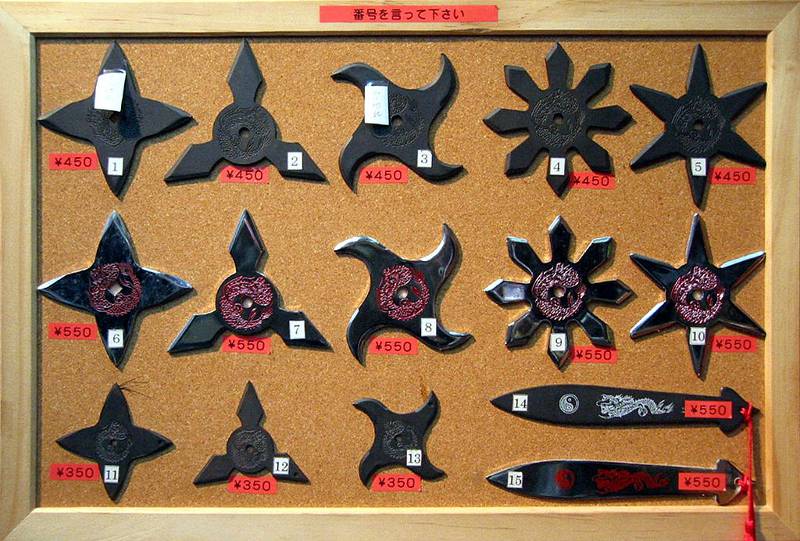 These sharp spiked objects known as caltrops in the West are particularly useful when slowing down pursuers. A ninja can throw these weapons on the ground and no matter which way they are tossed, sharp spikes will always point up and can penetrate the the enemies’ footwear since most Japanese traditionally wore waraji straw sandals.

Whenever ninjas started out on a mission, they invariably stuffed their pockets with tonki, a class of small weapons used primarily for escape tactics. It included a bewildering assortment of dirks, daggers, darts and throwing weapons.

If you want to be immersed in the ninja culture, you can visit the Iga Ninja Museum. The facility consists of a ninja residence with revolving walls, trap doors and hidden compartments, exhibition halls displaying ninja tools, gadgets and weapons, and a demonstration zone with spectacular shows featuring ninja skills and real weapons.

Would you like to start learning Japanese?
😊7-Day Free Japanese Course😊for Beginners

Get your original Hanko (Name seal)