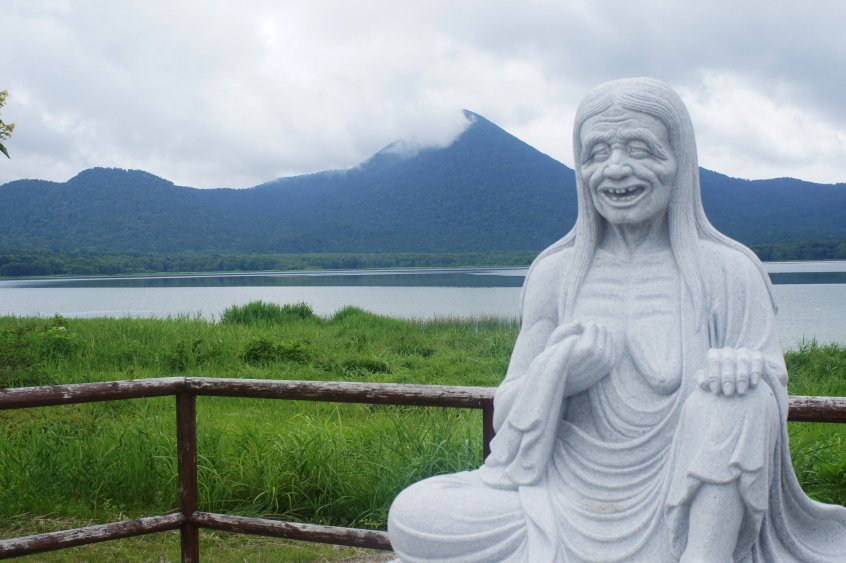 Osorezan is one of eight peaks that make up the Osore-zan Mountain Range (Osore-zan Sanchi, 恐山山地), which runs from east to west in the center of the Shimokita Peninsula. Mount Osorezan’s most recent eruption was 10,000 years ago, but the peak still has a number of crevices letting out steam and volcanic gases, which indicate that it is still an active volcano. The most potent gas is sulfur dioxide, and the Lake Usori at the mountain’s center is filled with highly acidic water. The mountain was once actually called Mt. Usori, but over time the name changed to Osore, meaning fear or dread. 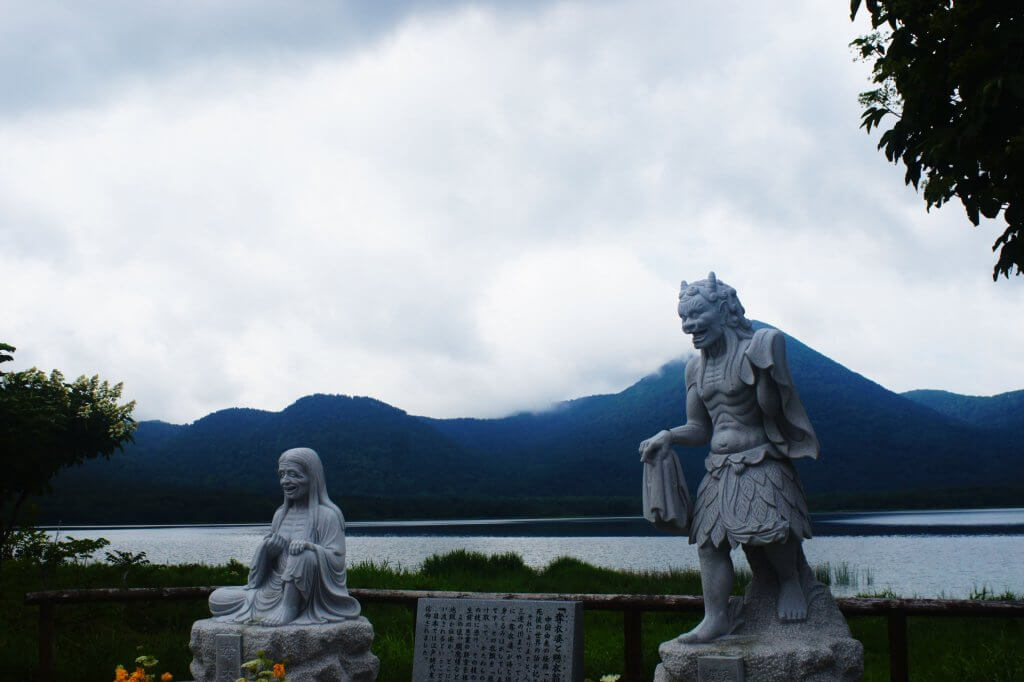 It is said that the Buddhist monk Ennin, who first discovered the peak in 862 CE, was taken aback at how much the landscape resembled the description of Hell from Buddhist writings.

The mountain’s volcanic crater is surrounded by eight peaks, at the center of which lies Lake Usori, which is fed by a small stream. This matches the Buddhist description of hell almost exactly, and Ennin associated the stream with the Sanzu River, which, according to Japanese Buddhist tradition, everyone must cross over when they die. It was the combination of the mountains with the stream that convinced Ennin that he had found the gateway to hell. He founded the Bodai-ji Temple there not long after.

It’s no surprise that Osorezan would come to be called by such a terrifying name, and even today, Osorezan’s landscape still remains quite “hellish”. The ground is quite rugged and jagged, and the yellow-stained rocks open up to release steam and sulfuric gas into the air. 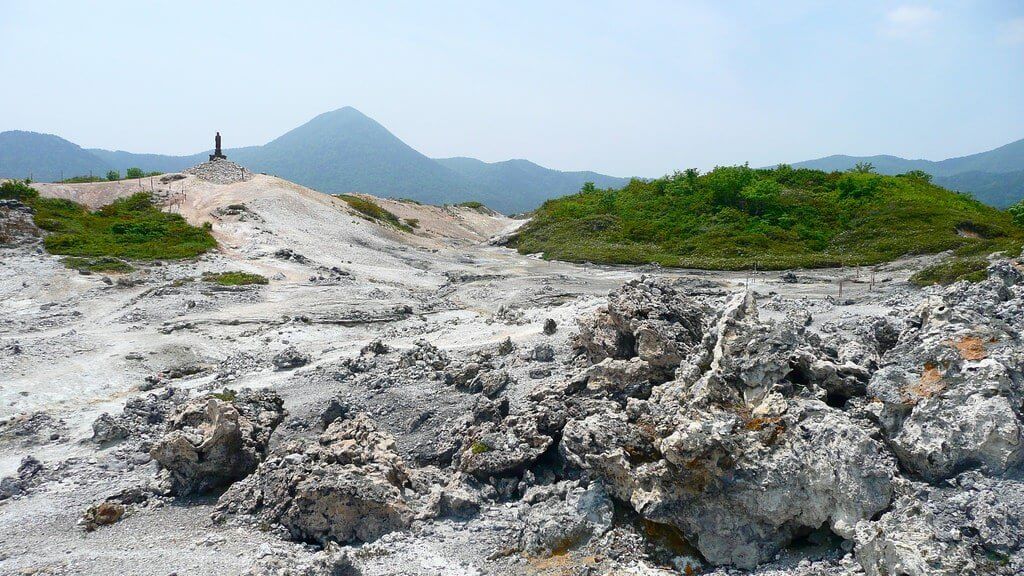 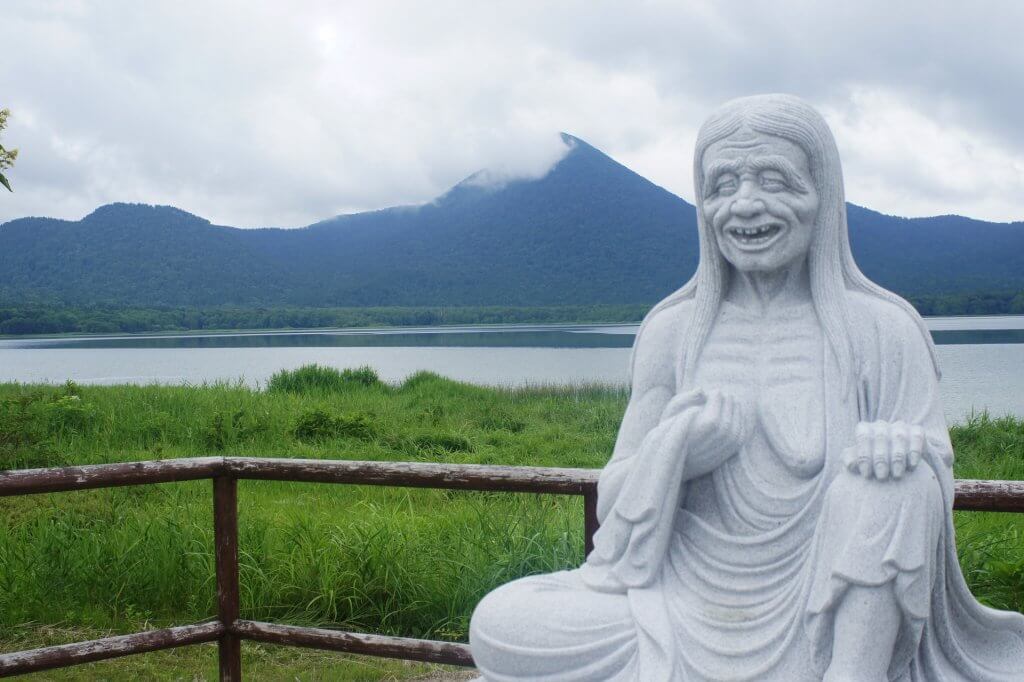 As centuries passed, and more bodies were enshrined at Bodaiji Temple, Osorezan gained a reputation of being the entrance to the afterlife. The mountain became a popular pilgrimage destination for people who lost loved ones, especially children. Statues of Jizō Bosatsu, the Buddhist deity who helps the souls of the deceased find peace, were constructed all over the mountain.

According to Buddhist belief, the souls of those who passed away would have to cross the river (Sai no Kawara) to get to the afterlife. They would do this by piling rocks and stones on the riverbed in order to cross, but evil demons would try to destroy the piles and thwart their efforts. Jizō would support the souls by protecting them from the evil demons.

Pilgrims who visited Osorezan also made piles of small rocks and stones so Jizo would help their loved ones cross safely – a tradition that people still uphold to this day. People also traditionally put colorful toy windmills throughout the temple grounds and around Osorezan, to comfort and guide the spirits of the children and babies who have passed away. 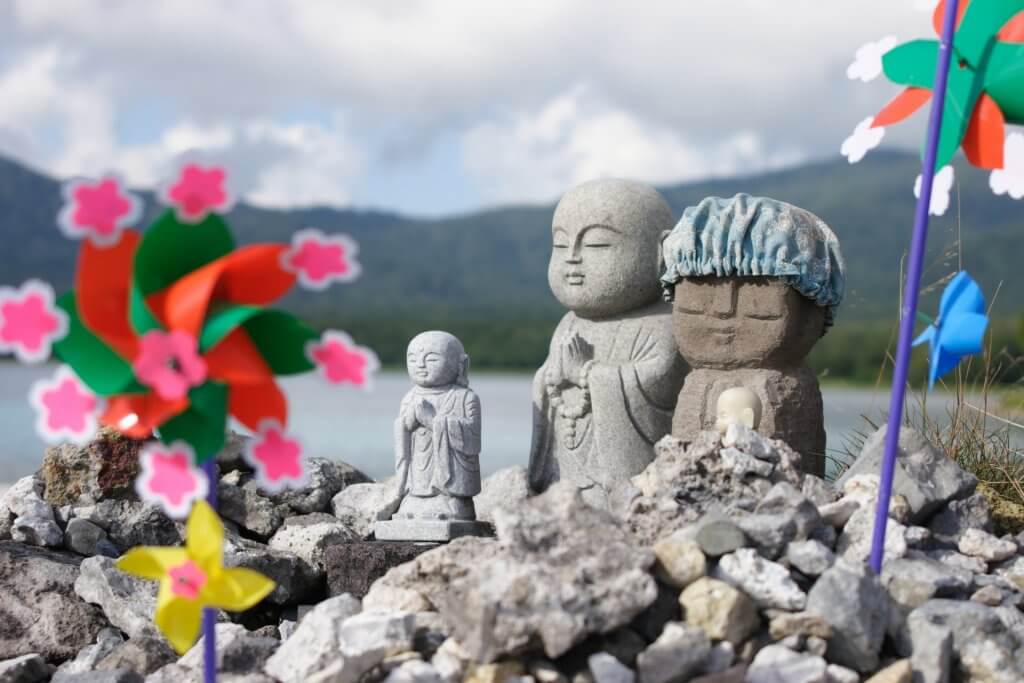 Bodai-ji Temple (菩提寺), was founded in 862 AD, was actually abandoned in 1457 and restored back to use in 1530. A unique feature of Bodai-ji is the presence of blind mediums known as itako who claimed to summon the souls of the dead and deliver messages to them. These women had to undergo extensive spiritual training and purification rituals. 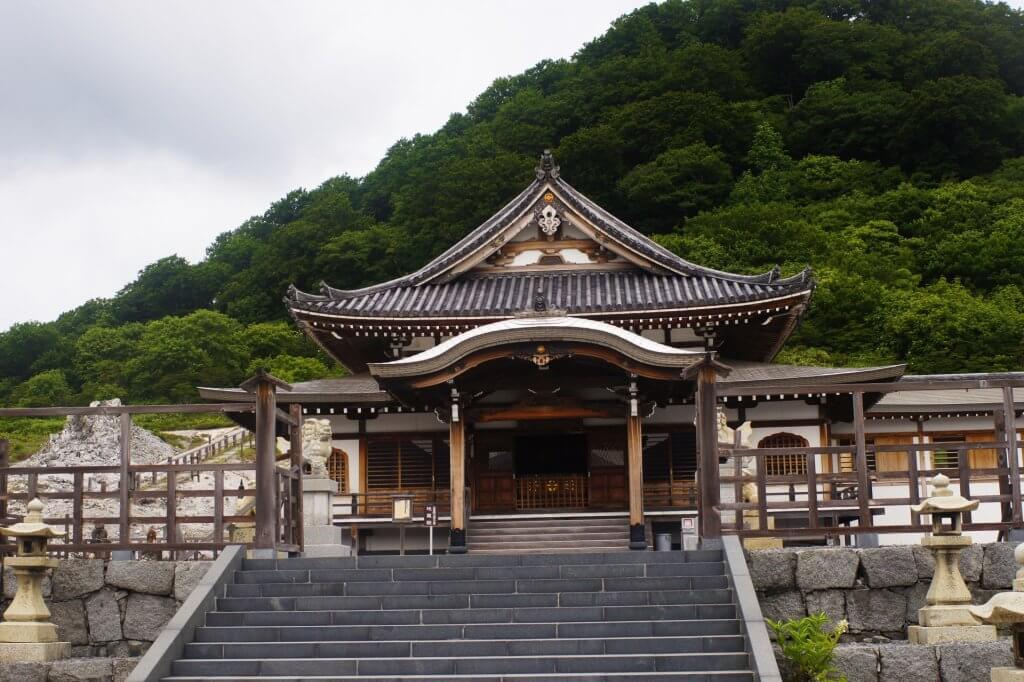 Two times every year, Bodai-ji holds a festival called the Itako Taisai. The event attracts those hoping to communicate with lost loved ones through the temple’s Itako. In order to commune with the dead, the itako perform intense purification rituals for the three months leading up to the event, and during the festival, they enter into a deep trance that continues for three days. 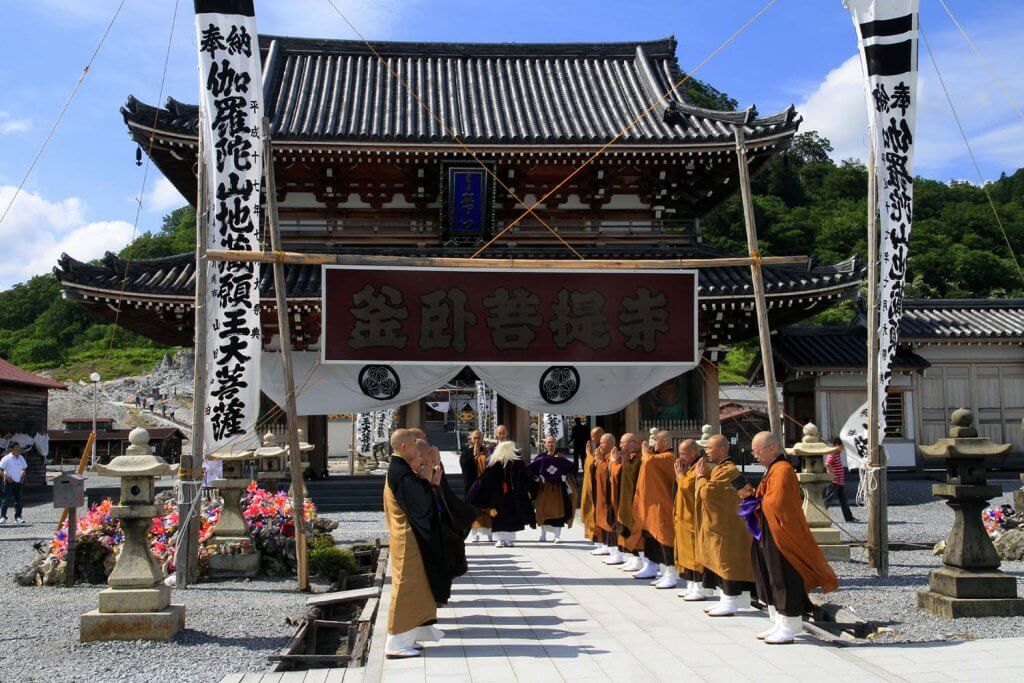 Osorezan is quite a popular destination for foreign tourists and Japanese people alike, and Bodai-ji Temple actually has overnight lodging where guests can spend the night on the mountain. Those staying in the temple are served traditional vegetarian Buddhist cuisine, can participate in the morning prayers, and use the hot springs that are located on the temple grounds. The hot springs in particular have been used by guests and pilgrims for centuries. 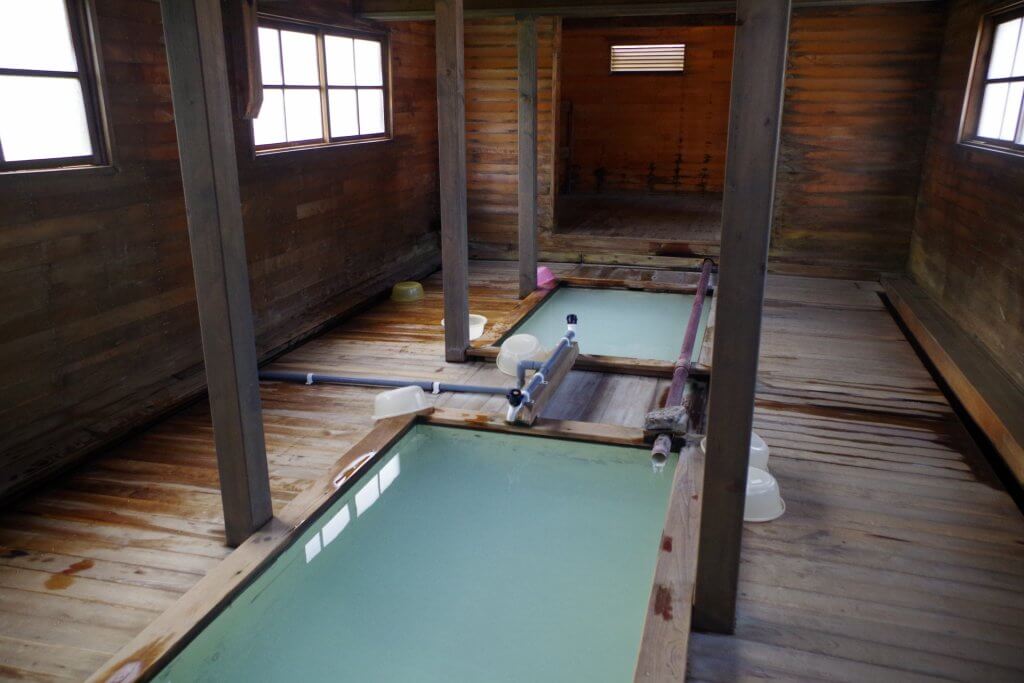