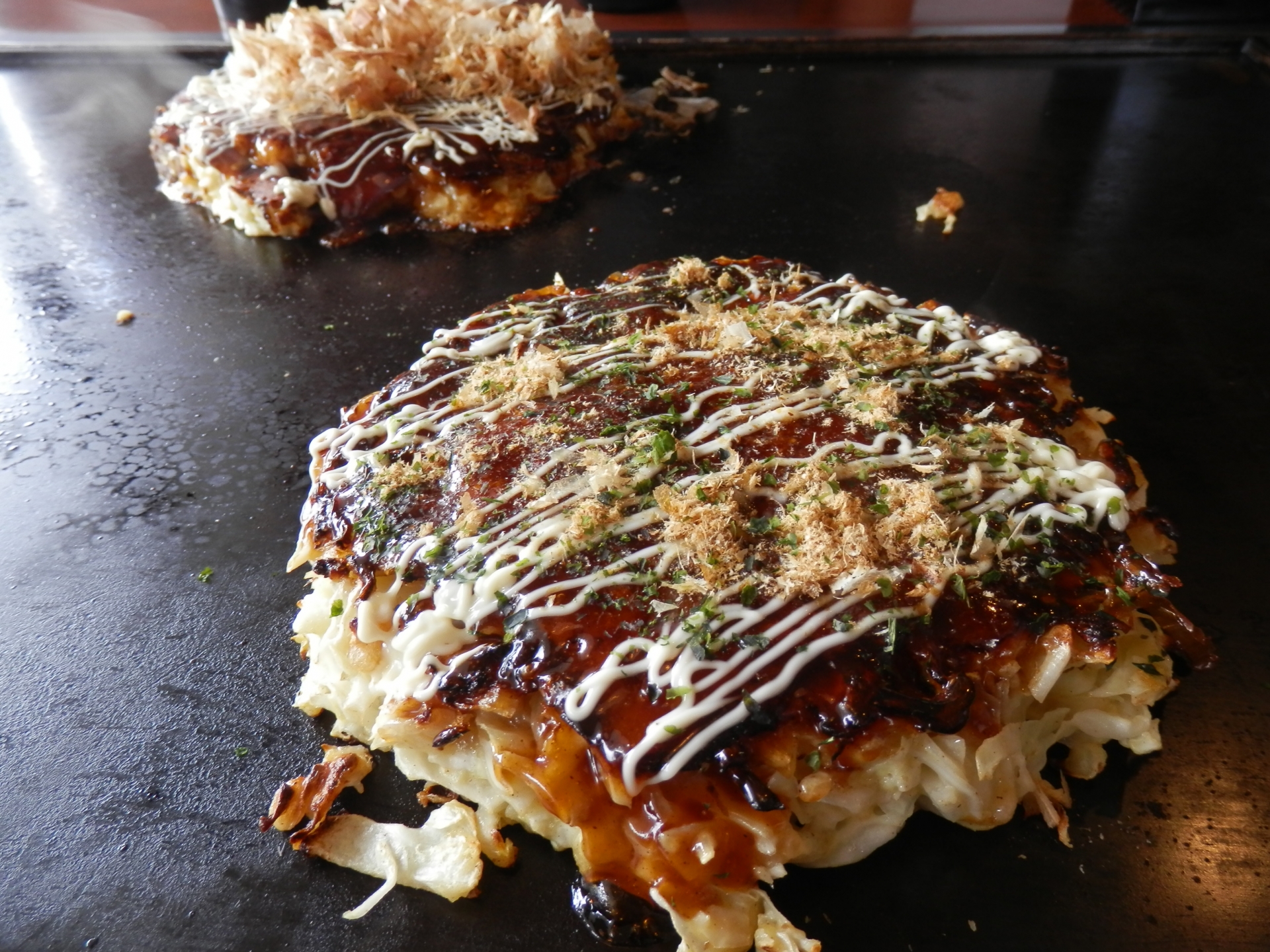 Japanese cuisine is known worldwide for a reason. The food is a gastronomical experiences made from the simplest, freshest ingredients and prepared with so much heart and utmost precision.

As Japanese cuisine gains more popularity around the world, many people have had the opportunity to taste Japanese favorites in their home country. It is amazing to see mainstays such as ramen, tempura, sashimi and sushi around the world. Another dish that is starting to get more recognition is okonomiyaki. The word “okonomiyaki” comes from the Japanese phrase “okonomi de yaku”, which basically means grilling ingredients you like in the way you want it. This pan fried dish is composed of batter made from okonomiyaki flour, cabbage, and other toppings. It can be enjoyed anywhere in Japan, but it is mostly popular in Hiroshima and Osaka. Even though okonomiyaki is batter cooked on a griddle, do not mistake it for the breakfast pancakes in the West which are sweet and made even sweeter with a generous drizzle of maple syrup. Okonomiyaki is more on the savory side and it is often topped with seafood, pork, mochi (sticky rice), cheese, etc..

Okonomiyaki is considered to be one of Japan’s most “sociable” dishes because it is just meant to be shared. Often, groups of friends will sit around their own teppan tables, sharing slices of this savory pancake. It is even hailed as a classic date food in Japan.

Today, more restaurants are bringing the okonomiyaki experience to foodies by giving them the chance to cook their own Japanese pancakes in teppans or “iron griddles” installed on their table. The customer gets the liberty of choosing which raw ingredients he wants to have on his okonomiyaki. The iron griddle is also pre-heated and oil is poured all over to prevent the pancakes from sticking during the cooking process. Once the batter mixture is poured onto the hot griddle, short metal spatulas are used to shape the batter into a circle. Then comes the tricky part, which is flipping the okonomiyaki over to cook both sides evenly. One needs to ensure that the okonomiyaki has been cooked through so that it will keep its shape when flipped over. Once cooked, the Okonomiyaki is brushed with a special sauce. Though optional, some add a dollop of mayonnaise. Finally, shavings of smoked bonito called katsuobushi and dried seaweed are placed on top of the okonomiyaki as garnish. The spatulas are then used to slice off pieces and the Okonomiyaki is ready to eat. This style of preparing Okonomiyaki is known as the Kansai style or Osaka style which is more popular around Japan.

In the Hiroshima style of cooking okonomiyaki, the ingredients are not blended all together, but instead stacked on top of another. The batter is cooked like a thin crepe and the toppings are cooked separately. They are then piled on top of the crepe, and served on a bed of yakisoba noodles. Other areas in Japan have also added their own twist to this local fare. In Hamamatsu, takuan or pickled daikon is added to the okonomiyaki batter. In Kishiwada, Osaka, they have kashimin-yaki, a variation of okonimiyaki that is made from chicken instead of pork. Down on Monja Street in Tsukishima, one can find a runnier version of okonomiyaki, called monjayaki. In the Guinness Book of World Records the biggest okonomiyaki ever was made by the Kamigata Okonomiyaki Takoyaki Cooperative Association and it weighed a whopping 1.6 tons.

To satisfy our Okonomiyaki cravings, our team headed down to Kobe Genji in Hyogo-Prefecture. It’s located at the 7th floor of Mint Kobe beside the Sannomiya Station. Watch Kazue, Epi and Kenta as they tell you all about their experience.

We have more videos of interesting places to visit in Japan, subscribe to the Japanese Language and Culture FB Page to get updated on our latest posts.