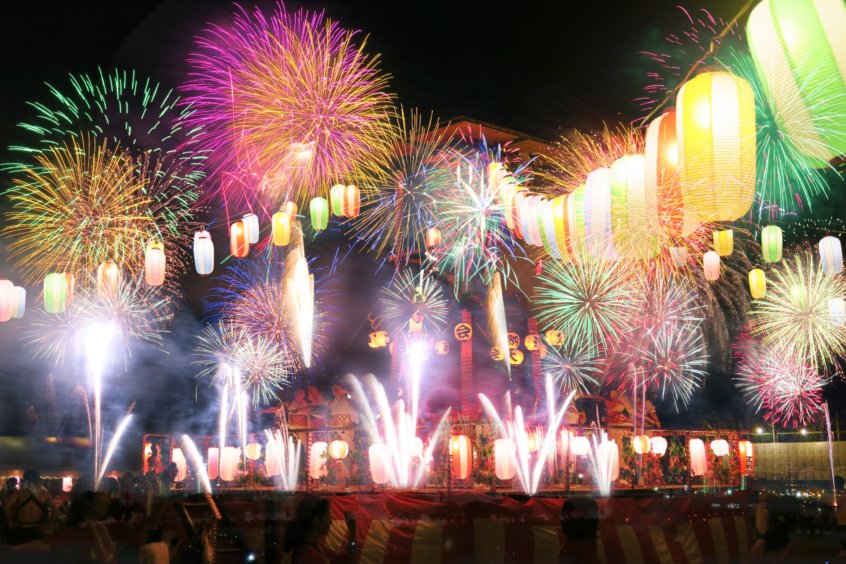 Fireworks, called hanabi (花火) in Japanese, have a long history in Japan and are a fundamental part of Japanese summers. Japanese fireworks displays are quite unique compared to other countries’.

Although fireworks are closely associated with summer in Japan, much unlike Western countries, fireworks are not typically used to celebrate the New Year. Japanese fireworks range in size, from smaller ones to the world-record-holding Yonshakudama shells which are 1.2 meter in diameter and weigh several hundred kilograms.

Another common characteristic of Japanese fireworks festivals is for some spectators to come dressed in yukata, which is suits to the omatsuri atmosphere. The firework shows typically start some time after sunset and last about one hour. They often end with a grand finale of hundreds of shells launched all at once. 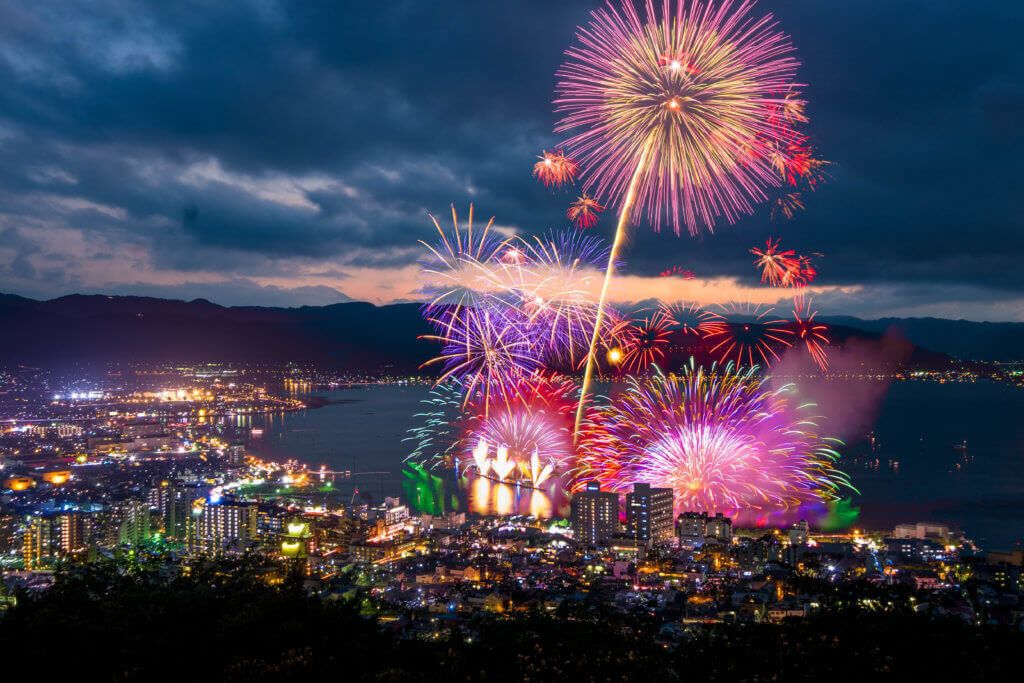 Beating every other display in Japan, this breathtaking display has over 40,000 rockets launched over the lake, creating stunning reflections. The biggest viewing area is in Suwa City on the southern side of the lake. It gets incredibly busy of course, so before you visit, be sure to have your travel cards charged and routes home planned. 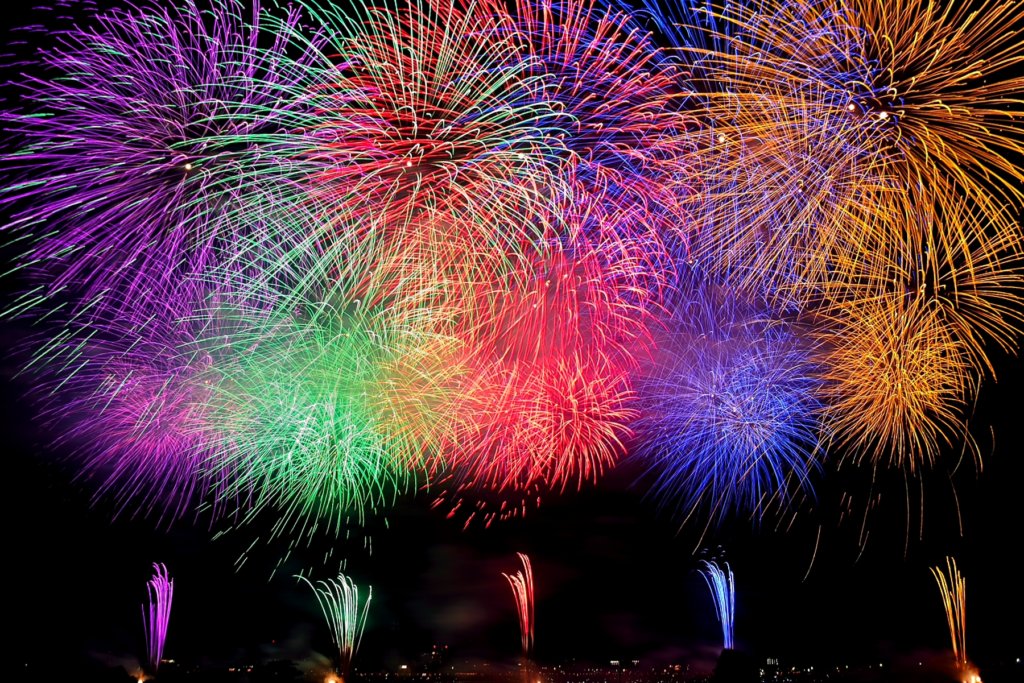 This festival is held every year from August 1 – 3, and the fireworks are launched on the evenings of August 2 and 3. The festival first originated after World War II, as the city of Nagaoka struggled as a result the war, so the festival was held to support the people affected and raise the city’s spirits. The Nagaoka Fireworks Festival is set apart from other large fireworks festivals in Japan because the fireworks are synchronized in time with music. The entire show is about 2 hours long, and launches an impressive 20,000 fireworks. 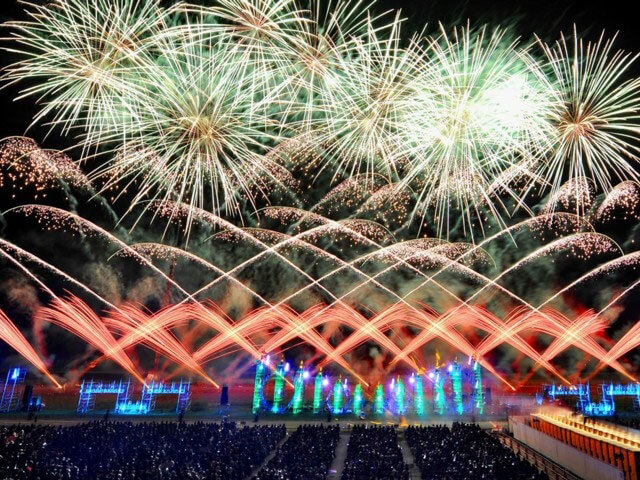 Kachimai was first held in 1929 as Hokkaido’s first ever firework display and today, with around 20,000 fireworks, it is one of Japan’s largest fireworks festivals. Sponsored by Tokachi Daily Newspaper, the name of the fireworks show is “Kachimai” which roughly translates to “every win”. The whole show is synchronized to music and lights, taking the entertainment to the next level. The symbol of the Kachimai Fireworks Display is the Nishiki Kamuro firework which sprays golden sparks and lights up the night sky. The festival is a precursor event for the Heigen Matsuri, which is held every year from August 14 – 16.

This is Tokyo’s biggest summer fireworks festival. It dates all the way back to 1733 of the Edo period, and contines to draw large crowds to this day, as close to 950,000 people come to watch the display every year. A total of 20,000 fireworks are launched from two locations on Sumidagawa (Sumida River). Location 1 features fireworks from the top pyrotechnic companies in Japan. And, since the introduction of the second location in 2012, the famous Tokyo Sky Tree can be viewed among the fireworks, making the festival become even more popular. 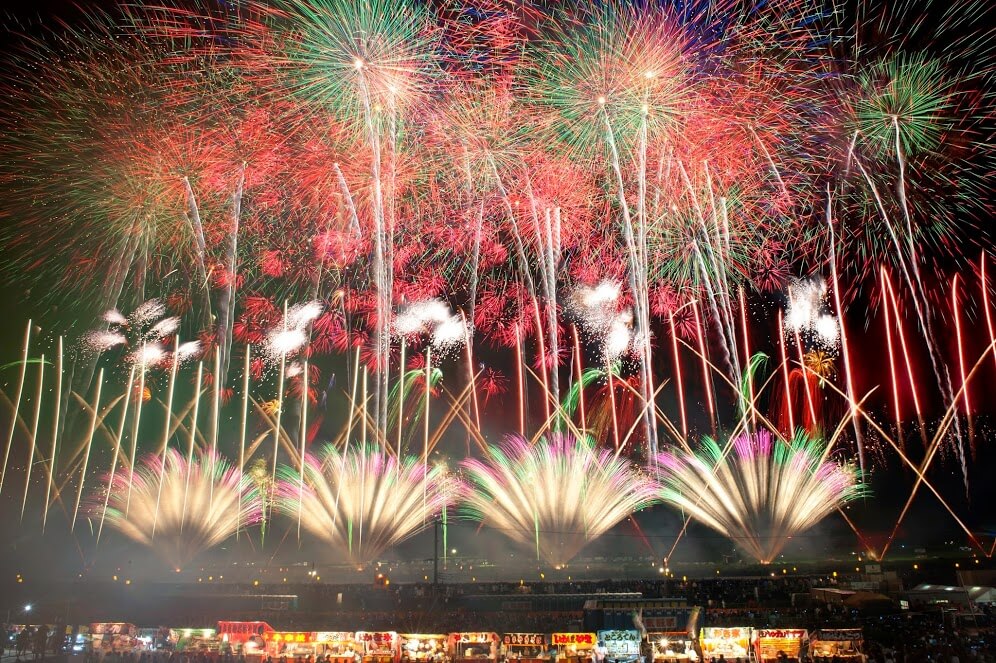 This event is one of only two fireworks festivals in Japan to receive the prestigious Prime Minister’s award. One of Tohoku’s largest fireworks displays, the Omagari display is actually a competition between pyrotechnicians from across the country, and features an astounding 18,000 fireworks. Although the population of the Omagari district of Daisen City is only 40,000 people, up to 800,000 people are drawn to the fireworks here every year.

This competition serves as the “playoffs” for competing fireworks companies in Japan. You can even go as far as to say that this is the event that determines the top pyrotechnician in Japan. Each artist individually launches the fireworks they made themselves. In addition, the fireworks at Omagari have a set theme and a storytelling element.  A particular highlight is the rows of star mines which burst one after another in time with the music. 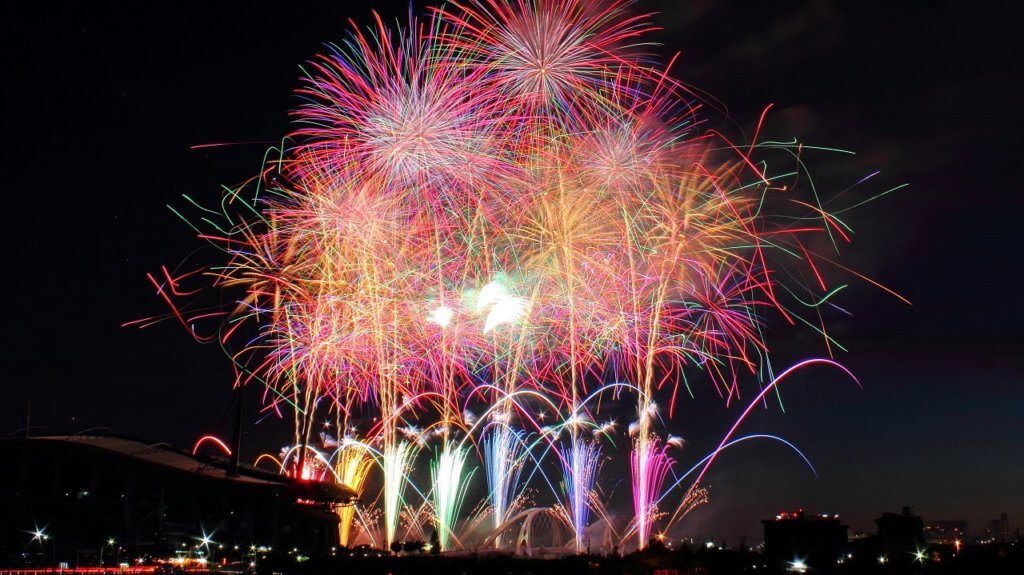 The Toyota Oiden Matsuri Festival may be the largest event of the city, and the stars of the festival are the citizens themselves! At preliminary events held in each district months before the great final, teams of families, company colleagues and neighborhood friends gather to practice their dance performances in preparation for the long awaited finale held in the central area of the city.

The following day after the dance competition is the great fireworks show, featuring over 13,000 shells, countless near-ground firings, traditional hand-held cannon Tezutsu fireworks, and a colossal “Niagara Falls” curtain of fireworks over 500 meters wide. Precisely coordinated to inspiring music, the show is a jaw-dropping spectacle of monumental explosions of light and color that all visitors must see while in Aichi! 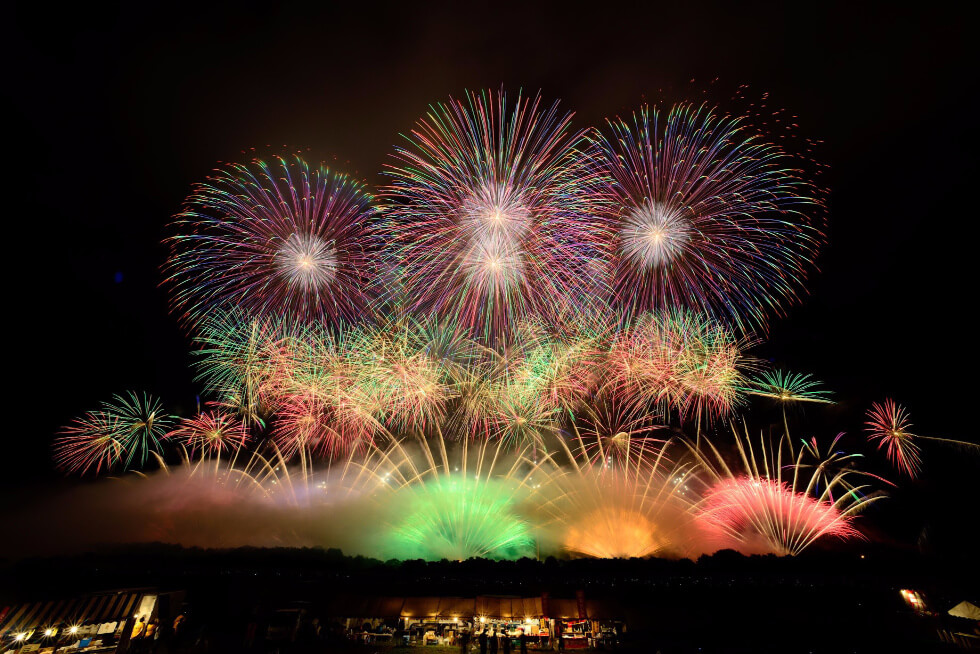 This festival is held every year on a Saturday in mid-August. Some of the country’s top pyrotechnicians gather and compete in this competitive display that features an impressive 12,000 fireworks, some of which even reaching 700 meters wide! The location along Akagawa River from Haguro Bridge to Mikawa Bridge is free of any obstructions, so spectators can enjoy the fireworks with an uninterrupted view. Tickets must be purchased in advance on the official Japanese website, but you can see it for free by watching it from the rice fields of Mt. Haguro. 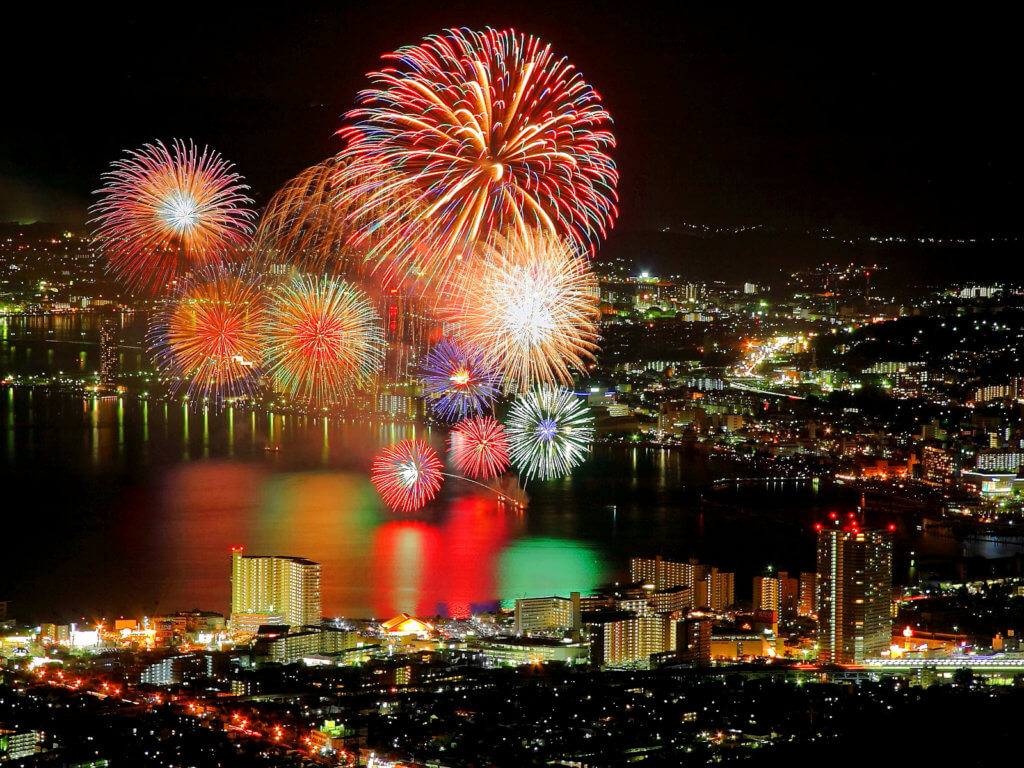 This phenomenal fireworks festival is held every year in early August at Like Biwako, the biggest lake in Japan. Biwako is in Shiga Prefecture, which isn’t a major tourist destination, but it is only 30 minutes from Kyoto, making it a good day or half-day trip. It’s certainly worth the trip, as the sight of the night sky full of massive fireworks reflected on the surface of the lake is truly incredible. 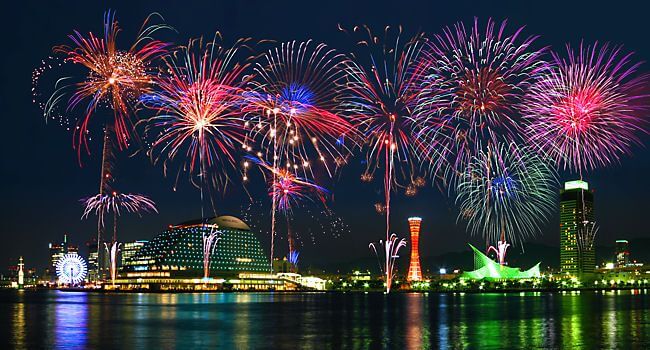 One of the grandest fireworks events in all of Hyogo Prefecture, this large fireworks display uses the Kobe City skyline as a backdrop for an incredible 15,000 fireworks. Kobe City at night is known as the “million dollar night view”, and when combined with the fireworks, it makes for a truly impressive sight. The festival is held every year in early August, and draws close to 280,000 spectators. Popular viewing areas include Kobe Harborland, Meriken Park, Island Station, and Venus Bridge. 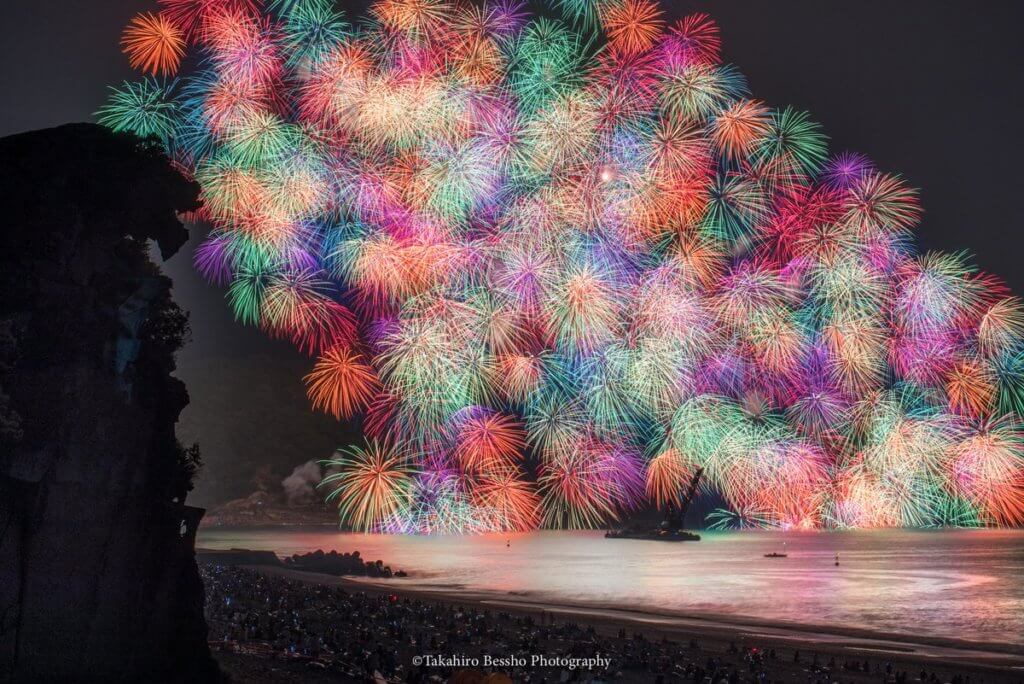 This fireworks festival has a 300-year history, and is held every year on August 17. 10,000 fireworks are launched from two boats on the sea, creating a beautiful arch of fireworks over the sea and coast. The climax of the two-hour show makes use of the “Onigajo” rocks, are a famous landmark in Japan. The sight of the fireworks along with the sounds resonating off the rocks is unique to this specific fireworks festival. Spectators can enjoy the display from Shichirigahama Beach.