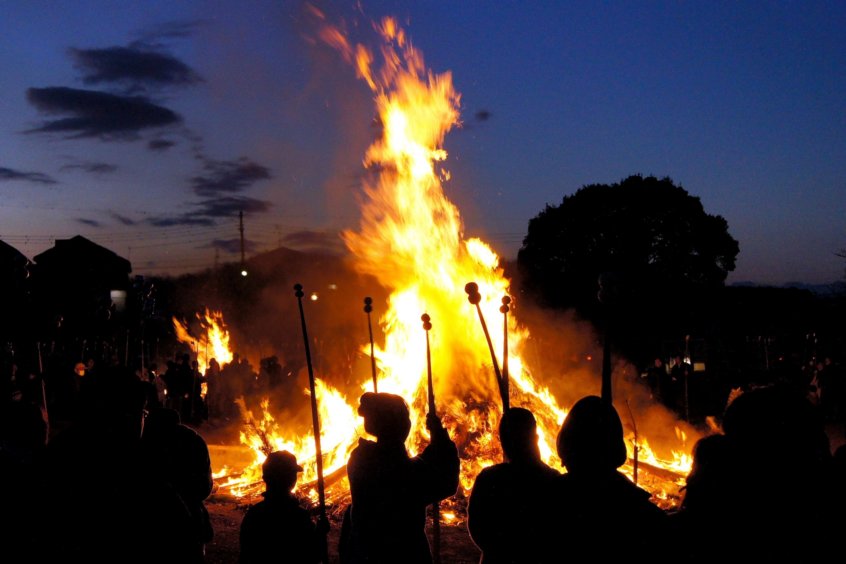 Festivals (matsuri , 祭り in Japanese) are an integral part of Japanese culture. Every year in Japan, there are thousands of festivals held all across the country, and they come in many different varieties. Fire festivals in particular are incredibly beautiful, powerful, and lively, and are definitely worth checking out if you visit Japan! Here is a list of the 10 top fire festivals in Japan.

The Nozawa Fire Festival is one of the three biggest fire festivals in Japan. It is held at Baba-no-hara, Nozawa Onsen Village on the 13-15th of January every year. There are festivities on all 3 days of the festival, with the biggest event occurring the final night on January 15th from 7 to 10pm. Massive crowds gather around the large, burning torch, as tall banners are carried and set afire as well.

This festival is held every year on the Sunday that is the closest to September 9th of the Lunar New Year Calendar. In this lively fire festival that dates back 1500 years, participants light a giant bonfire and gather around it in a circle. Five people are chosen to play the role of demons, which they do one at a time by wearing a mask and carrying a long stick. The demon then chases people in circles around the bonfire, and it is said that if you get hit by the stick, then you will not get sick for an entire year.

This festival is held every year on the fourth Saturday of September. This “fox fire” festival begins with a large procession of torches, costumes, masks, face paint, and a bride and groom that are carried through the town. After that, the bride and groom head towards the venue where the wedding ceremony will be held. It is said that wishes such as “Five-grain rich food” “Home safety” “Business prosperity” will be granted to those who witnessed the marriage in this fox-fire festival.

When: A Saturday in late September

This festival is regarded as one of the three biggest fire festivals in Japan, and features a flame of a great torch with a weight of over 50 kilograms that is danced along the path approaching the shrine. There is also a proud parade of 12 portable mikoshi shrines accompanying the flames.

This festival is held every year in October on the weekend before Sports Day. Known as an intangible folk cultural property in Nara Prefecture, this festival is characterized by a procession of the portable mikoshi shrines, traditional Kagura (sacred music and dance), a fire ritual, and more. Most noteably is an event in which people carry burning torches down stone steps and compete to be the fastest.

The Yoshida Fire Festival is dedicated to the mountaineering of Mt. Fuji in the summer. 70 to 80 3-meter long torches are burnt along the main 1km road in the Kami Yoshida district, from Kanadorii (Golden Shrine gate) all the way to the Kitaguchi Honguu Fuji Sengen Shrine. Many other torches brought from peoples’ households are also burnt.

Where:  Kitaguchi-hongu Fuji Sengen Shrine, and other locations in Fujiyoshida City, Yamanashi Prefecture

This festival is held every year on the last Saturday of July. It is one of the three big fire festivals in Japan. Seven large and small “kiriko” lanterns circle around the large torch of about 30 meters. People in the crowd also carry their own torches as well, and swing them in circles. The festival prays for rich fertilization and good harvest in that year – but that all depends on the direction in which the large torch collapses.

When: End of July

Orginating in the late Heian period, this is a festival that conveys the period of time in which the god of rituals departed from the Kyoto Imperial Palace to briefly visit the village of Kurama. Bonfires are burned in various parts of the settlement, and a procession of people walks with swords, ropes of portable mikoshi shrines, and torches. The procession leads towards the mountain gate.

This is an exciting fire festival with many highlights. First, Yamabushi monks tread barefoot through the burning flames. After that is the main event that is famous in the Kanto area – people from all over gather in the open field to witness the monks perform chants, dances, and traditional weapon displays -and finally, the burning of trees. This event is believed to protect peoples’ homes and keep people free of disease.

This is a festival of fire boasting a tradition of 500 years. Father demons, mother demons, and even children demons in masks carry large flaming barrels around the hall in a hellish scene that is meant to protect the residents from disaster. Designated as an important intangible folk cultural property of the country, it is held on the evening of January 14 every year.

Thank you so much for reading this blog article, Japan’s Top 10 Fire Festivals. Hope you enjoyed it 🙂