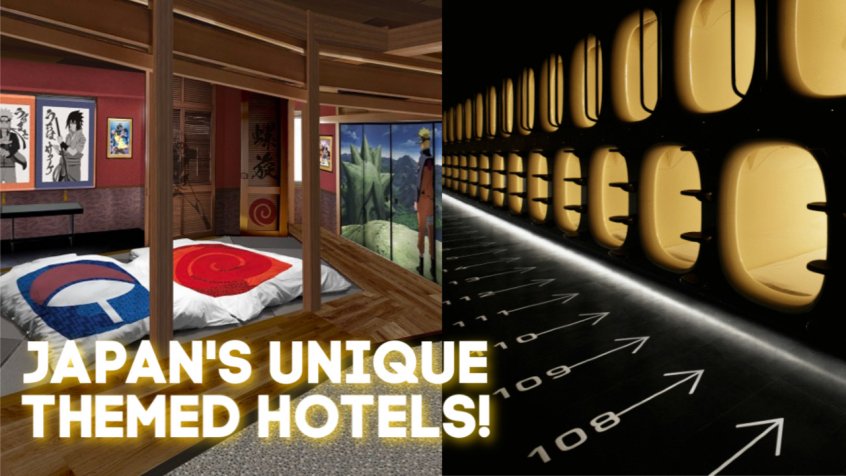 Would you stay at a hotel where you were greeted by a dinosaur at the front desk? What about a capsule hotel that looks like a pod from a spaceship? Sure, when you visit Japan, there are loads of regular hotels available for you to stay at. But, why not get the most out of your experience, and stay in one of the themed hotels that Japan’s over-the-top hotel industry has to offer? Although there are literally hundreds of themed hotels in Japan, here are some of the most unique.

Are you a bookworm? Book lovers won’t want to miss the chance to fall asleep surrounded by thousands of books! Book and Bed is a bookstore-style hotel where guests can read all 3,000 books on their shelves. There is a wide selection of novels, mangas, and magazines, and many of them are in English. The beds in Book and Bed are tiny, compact dormitory-style sleeping spaces, so it’s also a great space to meet other book lovers. There are actually several Book and Beds across Japan: 3 locations in Tokyo – in Ikebukuro, Shinjuku, and Asakusa, as well as in Kyoto, Osaka, and Fukuoka! 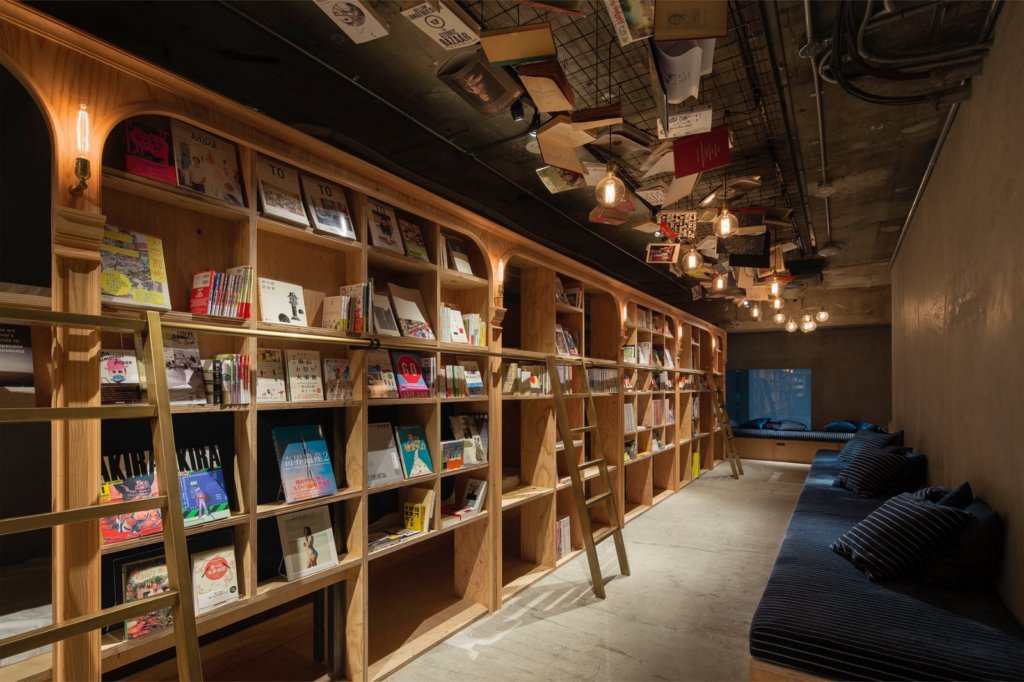 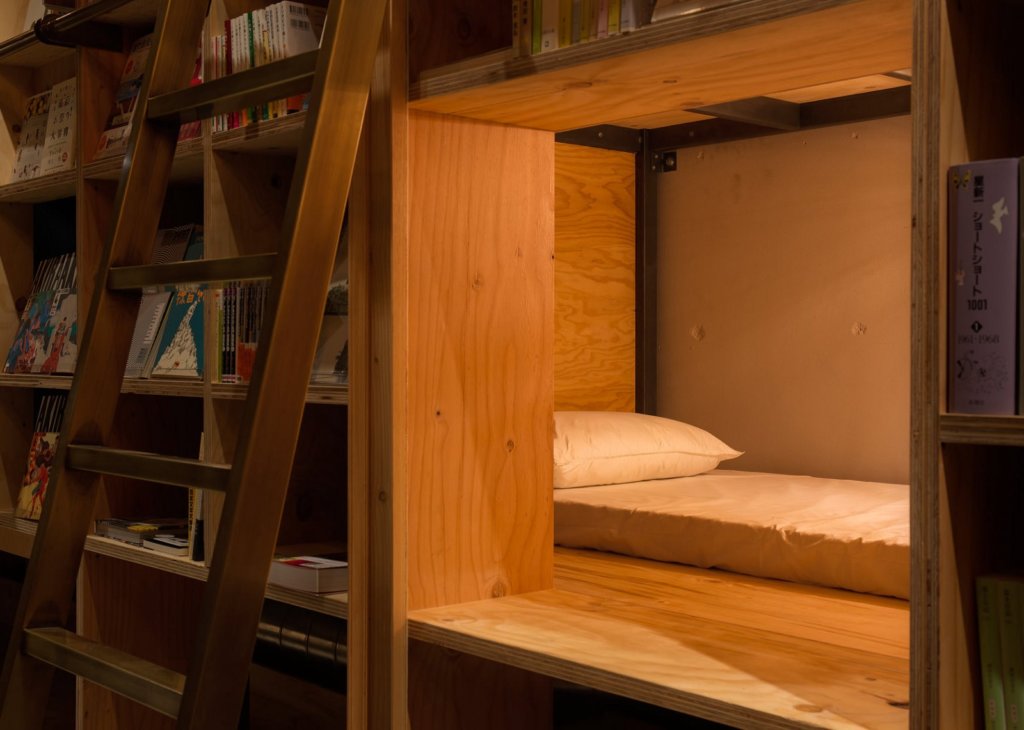 Id you’re taking a walk around Shinjuku in Tokyo, you might be surprised to spot a large Godzilla among all of the building! That Godzilla is actually the icon of Hotel Gracery Shinjuku (ホテルグレイスリー新宿), which is just a 5-minute walk from Shinjuku Station. At first glance, the exterior is no different from a regular hotel, but the hotel’s use of the massive Godzilla has earned it quite the reputation. The Godzilla statue is located on the terrace on the eighth floor, and the view of the Godzilla’s head can be seen from the window of some of guest rooms. The hotel also has an exclusive Godzilla-themed room available for booking as well. 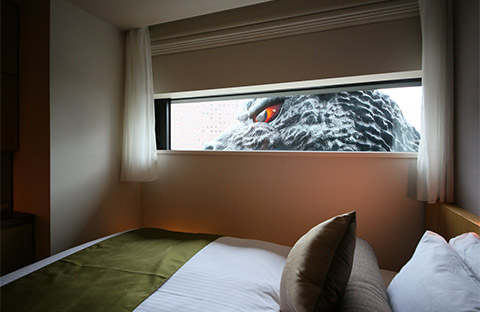 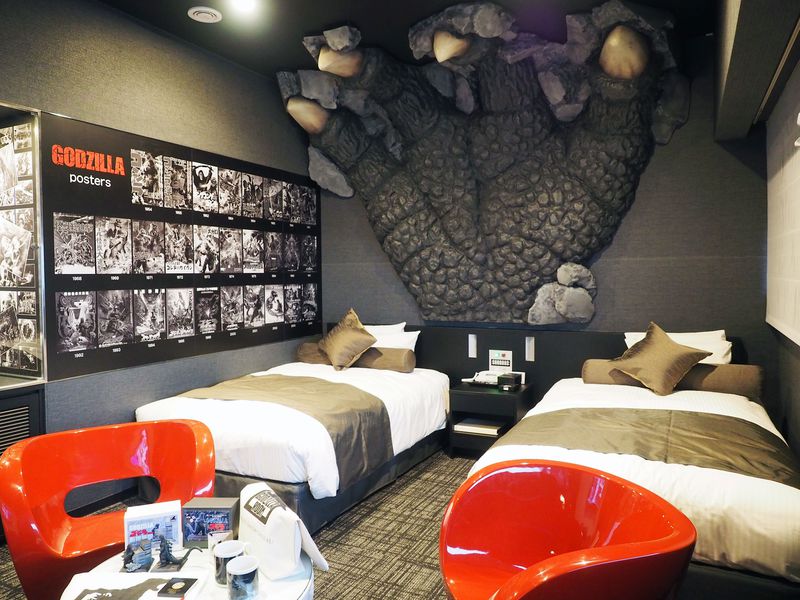 There are hotels in Japan themed after trains, but this high-class hotel is actually a train. When the East Japan Railway Company’s new long-distance overnight train “Shiki-Shima” launched in 2017, it became a viral sensation. The Shiki-Shima trains is made up of 10 cars that together hold 17 suites, and some even include bathtubs and lofts. It’s not just the luxurious suites that make this train resemble a 5-star hotel: there is also a piano bar, two glass observatory cars, and even a Michelin-star restaurant. The train holds up to 34 passengers and takes them around eastern Japan for two-to-four days. Tickets are booked months, or even years, in advance, and can cost up to $10,000 for a round-trip ticket. 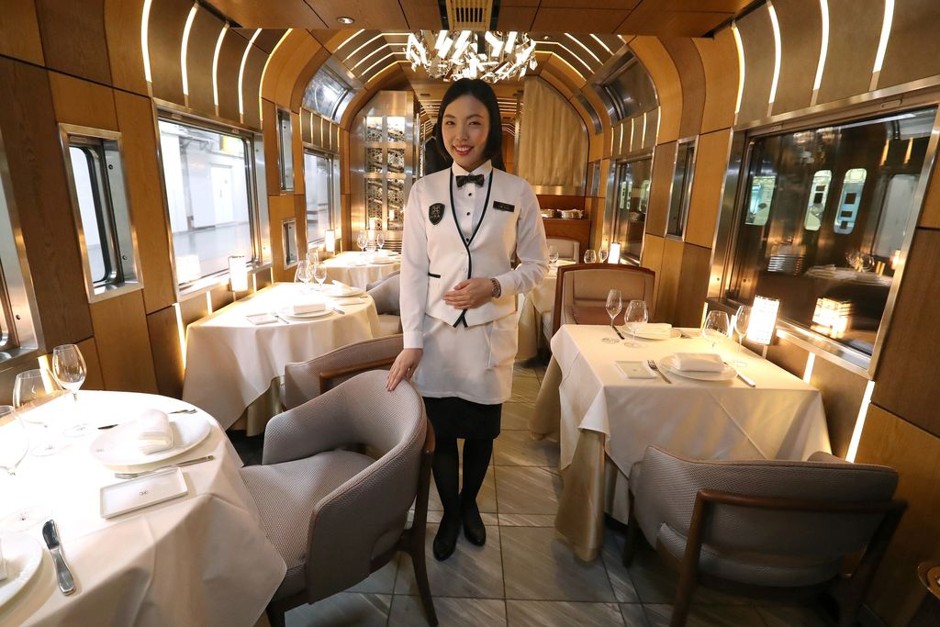 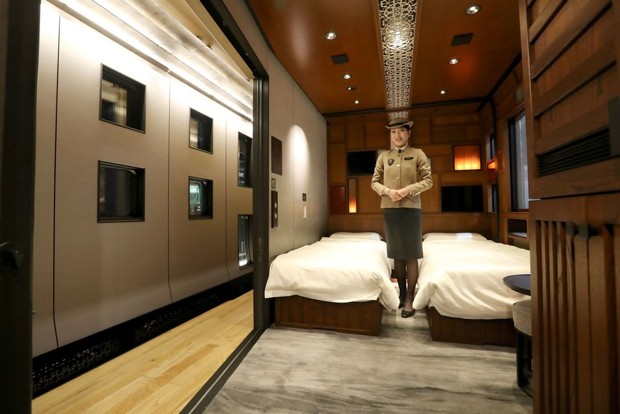 Characters are massively popular in Japan, and one character reigns over them all – Hello Kitty. The Keio Plaza Hotel Tokyo (京王プラザホテル東京) is a Hello Kitty lover’s dream, as the hotel also offers two cute Hello Kitty suites in addition to their regular rooms! Not only are there two different Hello Kitty rooms to choose from, but all of the provided Hello Kitty amenities and goods in the rooms are free to take home. There is also a Hello Kitty breakfast that is available with an additional charge. The hotel is located at just a 5-minute walk from Shinjuku Station in Tokyo. Understandably, the Hello Kitty rooms book up pretty far in advance, so be sure to check the website and call ahead if you wish to inquire about the room. 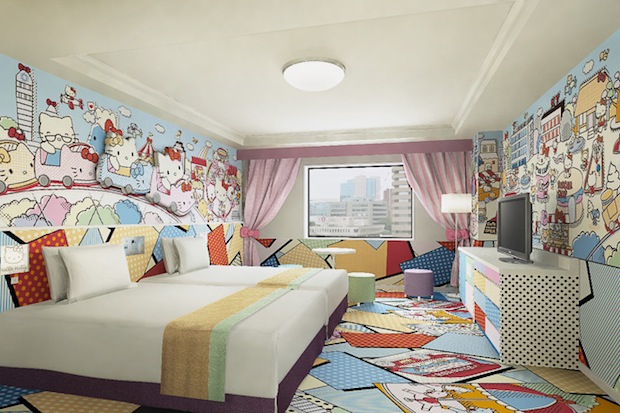 If you’re familiar with Japanese culture and technology, you’ve likely heard about capsule hotels – the compact spaces that are perfect for a last-minute place to crash for one night. However, Nine Hours Capsule Hotel takes this concept to the next, almost futuristic level.

There are actually several Nine Hours locations across Japan, all of which have the signature sci-fi /spaceship-style appearance. All capsule rooms are air-conditioned and heated, there are shared bathroom facilities with showers, and lockers where you can store your belongings while you sleep in your capsule.

If you’ve ever wanted to stay in a Japanese capsule hotel, you should give this trendy place a try. There are 7 locations in Tokyo, 2 in Osaka, and 1 in Kyoto, Fukuoka, and Sendai. 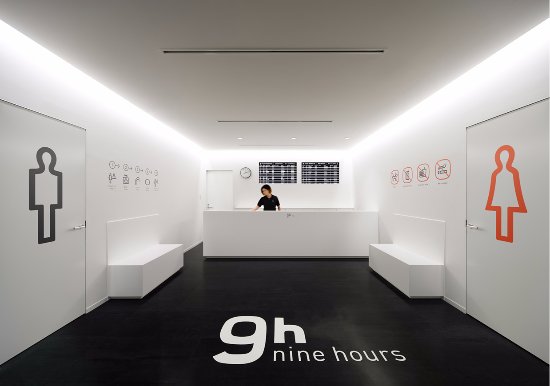 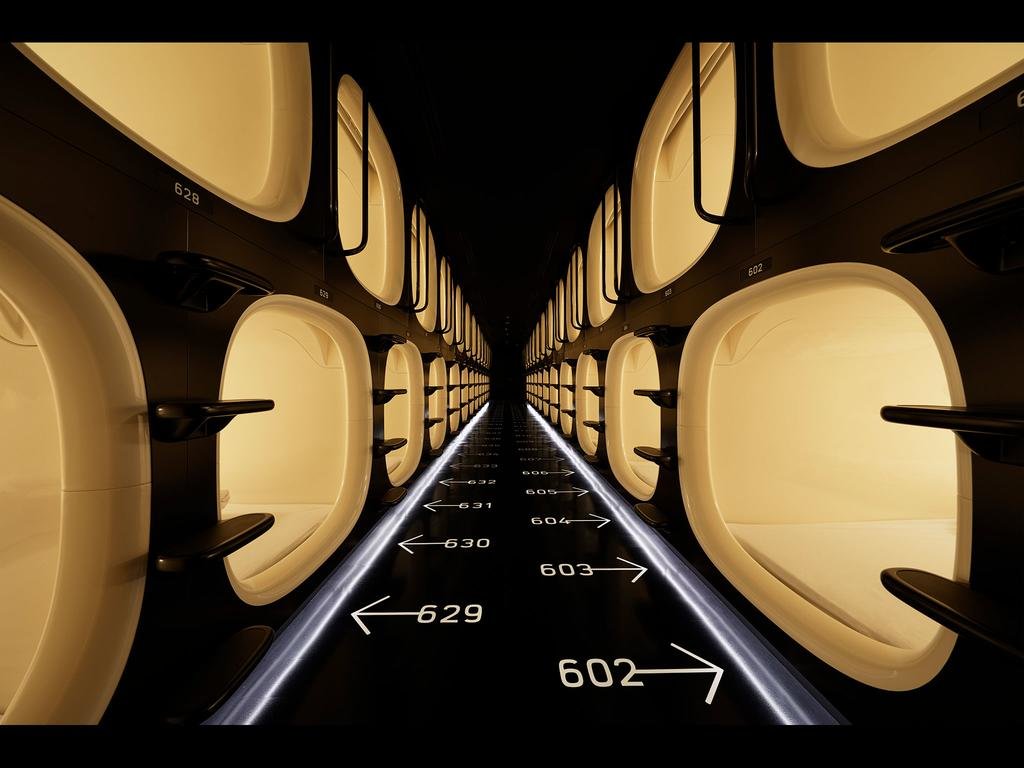 Andon Ryokan markets itself as being “Tokyo’s first designer ryokan“. Ryokan (旅館) are traditional Japanese inns, but Andon Ryokan in Tokyo is a more modern take on that. Like typical ryokan, Andon offers authentic Japanese accommodation, such as real tatami floors, thick futon bedding and even communal baths. Guests can also receive a yukata, a casual Japanese robe, if they’d like.

But, what makes Andon unique is the fact that it is decorated with art, murals, and tiles – the most well-known piece being the private jacuzzi with Ariake tile wall-art that was designed by pop artist Mie Ishii. The inn is also furnished with antique pieces, such as traditional heating devices (hibachi) from the Edo and Meiji periods. Guests are also free to help themselves to a variety of complimentary teas and enjoy the rooftop terrace with views towards the Tokyo Skytree. It truly is a combination of traditional ryokan and modern art! 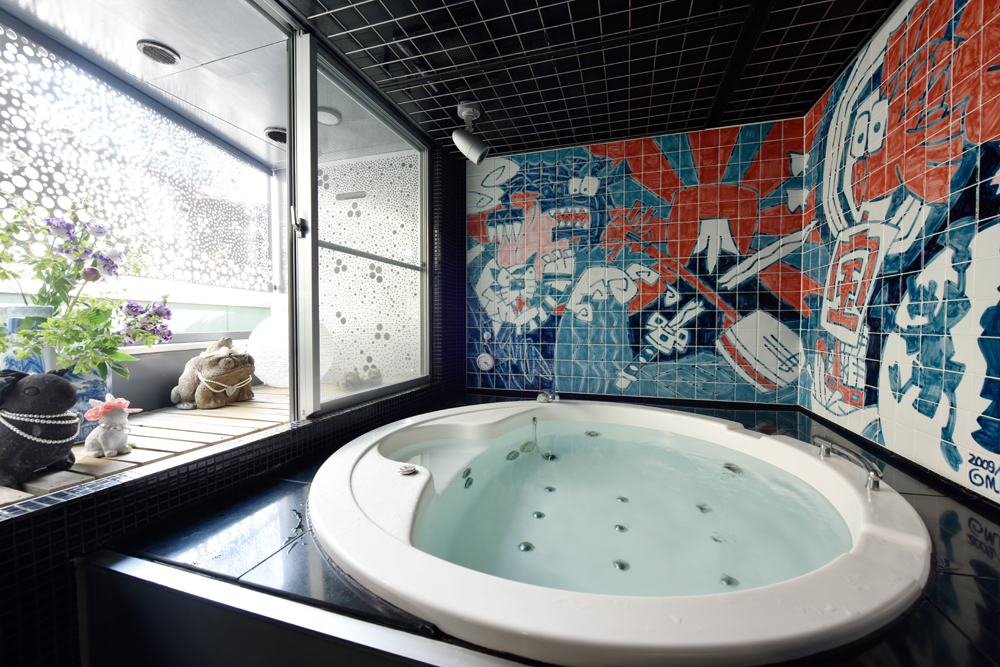 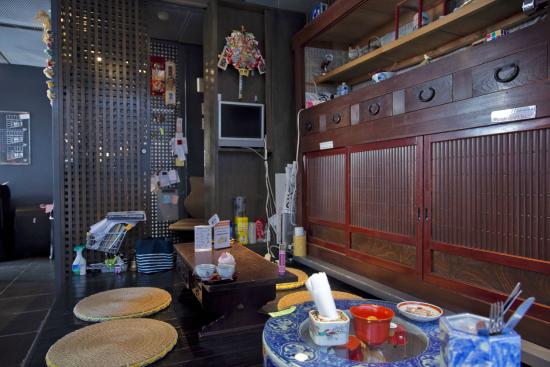 7. The Highland Resort in Yamanashi Prefecture

The Highland Resort in Yamanashi Prefecture is located near both Mt. Fuji and one of Japan’s most famous theme parks, Fuji-Q. While the Highland Resort does offer regular hotel suites and spa amenities, many people come to stay in one of the many themed guest rooms! There are 7 themes in all, each suite can hold 2-6 people, and the themes are either for specific characters or “aesthetic” experiences. 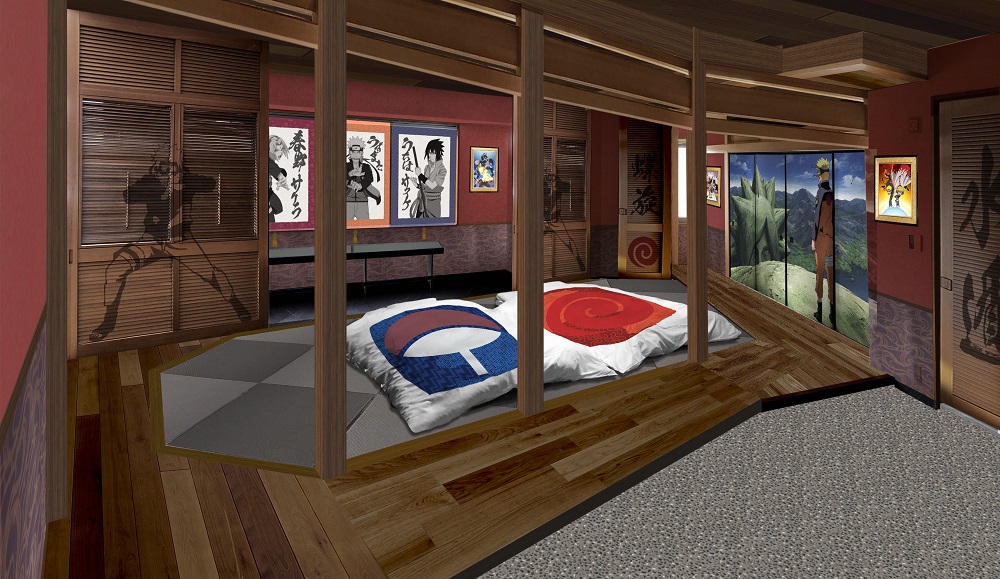 For those interested in character rooms, Highland Resort offers rooms dedicated to Naruto, Thomas the Tank Engine, and Lisa & Gaspard. The Naruto room actually just recently opened in July 2019, and offers elaborate interior decor that pays such attention to detail that any fan of the iconic series would be satisfied. Like the new Naruto suite, the Thomas the Tank Engine suite is an incredibly spacious 72 square meters, and also comes with special amenities and a unique “Thomas Party Set” meal. And, if you’re a fan of the British cartoon Gaspard and Lisa, there’s a Lisa room and a Gaspard room, and you can stay in whichever one you like more. The hotel also has a Gaspard and Lisa-inspired restaurant. 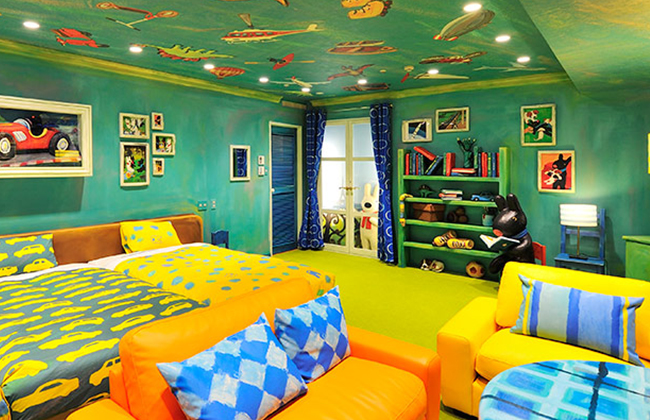 The other rooms are more “aesthetic” or “experience” based. The themes include a traditional Japanese-style room (washitsu, 和室), a Mount Fuji themed suite, a girly dollhouse-like suite, and a big, colorful family-friendly suite. Because of the Highland Resorts prime location, several of these themed suites also provide views of Mount Fuji.

Rate: Depends on the room

The Henn na Hotel (変なホテル) was a massive success when it first debuted in Nagasaki City in 2015. The name alone should give you an idea of what kind of place it is – the name is a play on a Japanese word “hen na” which means “strange”. It certainly is worthy of the title “Strange Hotel”, as it is first hotel in the world that is the completely run by robots! Naturally, the hotel became a viral sensation, and they have since opened more locations in Tokyo, Osaka and Kyoto. The hotel in Tokyo is 6-stories with 100 guest rooms, and conveniently located near Tokyo Disney Resort.

As soon as guests enter the hotel, they are greeted by a robot dinosaur at the receptionist desk. The desk is manned by other female receptionists who are “human”-looking robots. The lobby also has a fish tank, but don’t be fooled – the fish are robots as well! Apart from just in the lobby, there are a number of state-of-the-art technologies that are used for the service of the hotel. Instead of keys, you’ll get into your room using facial recognition. There are porter robots to help you carry your luggage to your room. And, many of the cleaning tasks, such as vacuuming and cleaning the windows, are done by robots as well. It’s both futuristic, as well as quite funny! 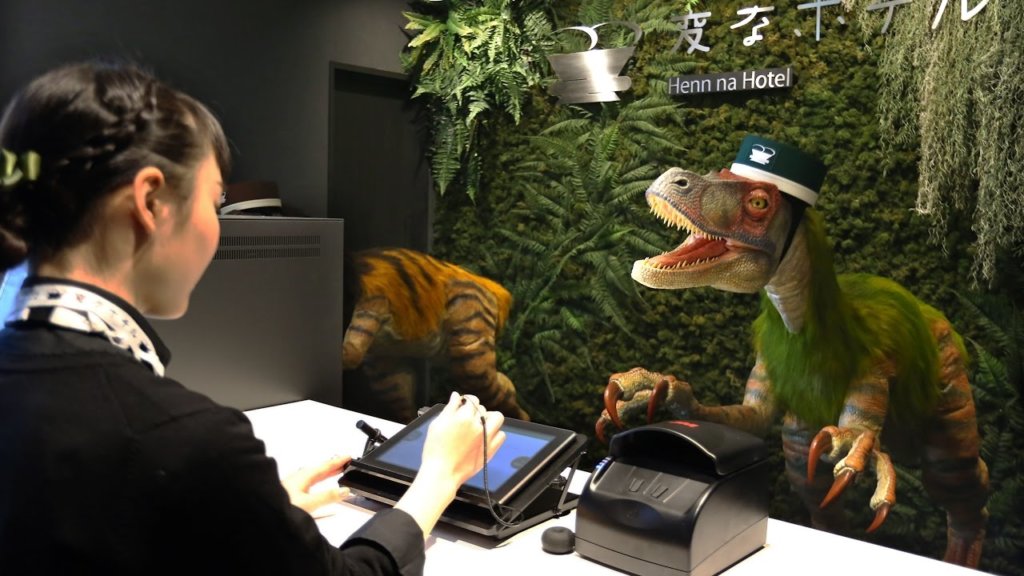 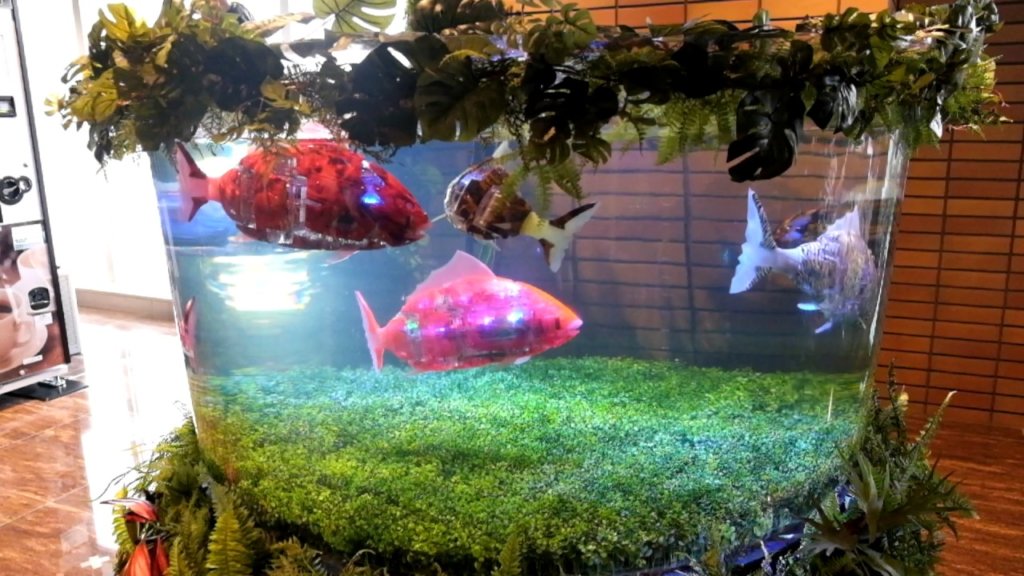 Do you know JR Pass? If you are traveling by train in Japan, this is an absolute must-have for your trip at a great price.
Check our blog about the JR Pass: Your Guide to the Japan Rail Pass

Travel Japan for less with the JR Pass!