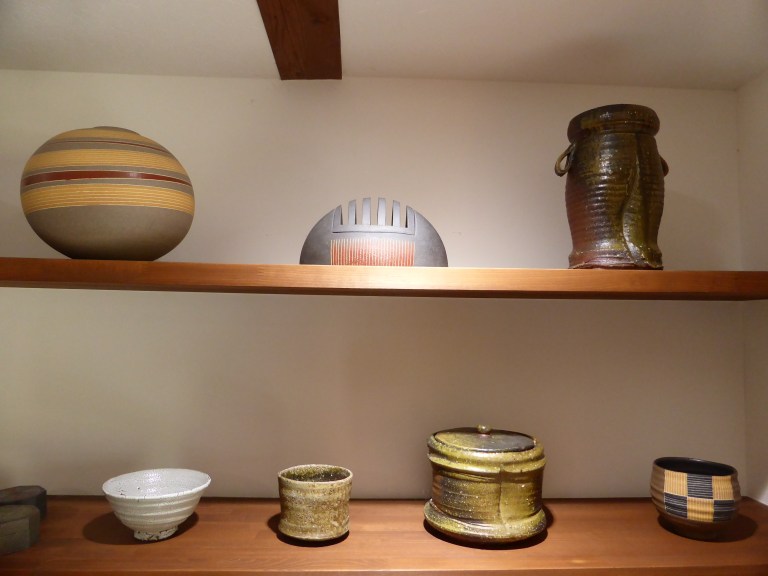 One of the earliest Japanese art forms is pottery (陶磁器 tojiki), which has been around since the Neolithic period.

Japan has a very long history of producing earthenware starting from the Jōmon period (10,000–300 BCE). The artistic tradition of pottery making is much celebrated in the Japanese culture and is an important aspect of another enduring tradition, the Japanese tea ceremony.

Though China is credited for bringing stoneware technique to Japan since the 4th century, the Japanese people have developed their own unique style that is distinctly their own. During its early history, two distinct types have emerged. One is the traditional, roughly finished pottery that is simple in design and usually made in muted earth colors. This is influenced by Zen Buddhism. It adheres to the aesthetic philosophy of wabi-sabi (austerity). The other is the highly finished porcelain ware that features complex and sophisticated designs. This article will focus on the former. In Japan, there are six pottery areas that are acknowledged as the birthplaces of important design traditions during the medieval period. These are referred to as “Nihon Rokukoyou (日本六古窯) and these six places were recognized as Japan Heritage in April 2017.

If you are interested in learning about Japanese pottery, here are the places we suggest you visit.

Shigaraki is one of Japan’s Six Ancient Kilns and one of the oldest pottery producing places in Japan. Shigaraki wood-fired stoneware was produced in the town of Shigaraki, Koka-gun since the Heian period at the end of the 12th century. Shigaraki ware is known for the special quality of its clay. By firing in anagama (cave kilns) or noborigama (kiln built on a slope), effects such as warm, reddish hiiro flashing, deep green natural ash biidoro, or burnt black koge can be achieved.

Shigaraki potters today manufacture practical products such as jars, flower vases, bowls, tableware, as well as tiles, furniture, and decorative ornaments such as tanuki raccoon dogs and frogs. Shigaraki clay is highly refractory, and while high in plasticity, it is also strong, making it ideal for both large-scale ceramics and small work. The ability to develop various wares is one of the unique features of Shigaraki ware. Shigaraki is now striving to become a world center for ceramics, creating a new culture of ceramic art based on historical tradition.

Bizen pottery is known for ash-glaze wares. The wood-fired stoneware is produced near Bizen city in Okayama prefecture starting at the end of 12th century. Bizen utilizes a firing process that was similar to that of Shigaraki and the main products are jars, vases and bowl-shaped mortars. The Bizen pottery center began making utensils for tea ceremony beginning at the end of the Muromachi era (1331-1573). Bizen pottery ware is often fired for a long period in the kiln without glaze, creating delicate gradations and a distinctive seasoned coloring. The warmth and depth of this ware are what makes them popular.

Do visit the Bizen Pottery Traditional and Contemporary Art Museum. The museum exhibits the history and current state of Bizen pottery including the process of creation and changes of kiln technology. Don’t miss the old Bizen Umi-agari (Ship-wreck pots) that were recovered from the seabed of the Seto Inland Sea, and colored Bizen without artificial coloring. Colored Bizen are very valuable wares produced by the Okayama clan given to the Edo Shogunate and other clans during the Edo Period. You can enjoy viewing about 250 masterworks ranging from modern pottery to pottery crafted in ancient times.

Tanbayaki was produced in the village of Tachikui, Hyogo prefecture for over 800 years. Tanba has certain features which separates it from other pottery styles. A comparison of pieces from the Momoyama period (late 16th century) demonstrates Tanbayaki to have a lighter, more refined feel, and has a characteristic natural glaze that has a greenish tinge. The pieces that are fired in anagama cave kilns are referred to as “Old Tanba.” It was during the latter part of the Edo period that finer and more sophisticated pieces were developed which include red-glazed ware known as “Akadobe-yu” and pieces of white clay known as “Shiro Tanba.” Although originally created for the locals from regional kilns, Tanba grew in nationwide popularity when it was featured in the Japan Arts and Crafts movement in the early 20th century and has remained popular to this day. Its beautiful natural glaze is reflective of the surroundings where it came from. It has been refined from years of experimentation producing simple yet tasteful pottery.

Echizen kilns were thought to have started production in the late years of the Heian period (794-1185) and were predominantly producing large-sized jars and mortars with Sankinko (small jars with three stripes on their surfaces), Heishi (small bottles), Suichu (small water containers), Katakuchi-kotsubo (small single-ported jars) and other small-sized wares produced only in small quantities according to the needs of the times. These were produced through the anagama (cave kiln) which was dug on a hillside to fire the clay.  Reducing the flame and cooling it under an oxidized atmosphere created an interesting color brown.

Seto pottery are glazed pottery made in Seto City in Aichi Prefecture from as early as the medieval period. Artisans produced mainly jars, vases, and bowl-shaped mortars. They have a characteristic yellowish-green and blackish-brown glaze. A city known for its ceramics (Setomono), Seto City promotes a movement called the “Seto Marutto Museum” which makes the whole town into a museum. A path at the foot of the mountains (Kamagaki-no-komichi) is lined with embedded plates and cups along the walls to give you a sense of everyday life of these craftspeople. Ceramic production started in the Kofun period (about 260-590 A.D.) but Seto’s distinctive potteries did not appear until the Kamakura period.

Seto sets itself apart from other ceramics because it was the only one that was glazed and the quality was so exceptional that it was even better than the imported glazed ceramics from China making it an expensive luxury item. Seto ceramics distinguished itself from Chinese versions by using different materials and techniques. The Seto ceramicists deliberately used brown-colored glaze to make them stand out and the motifs that are stamped into the Seto pieces also differentiated them from the Chinese originals. It was their attempts at differentiation from the Chinese ceramics that gave Seto its own style.

The ceramics made in Tokoname are known throughout Japan and worldwide for its high quality and referred to as Tokoname-ware. Currently, a large part of the ceramics produced in the region are used in industries from pipes to high-tech components. The history of ceramics in this region spans around 900 years and the number of kilns number over 3,000, which is the most in all of Japan. They are also believed to have the oldest kilns in the history of Japanese ceramics. Visitors can admire these beautiful works in art galleries, museums, and other places located throughout the city.

Tokoname-ware were used for religious purposes initially as vases for Buddhist sutra scrolls. With the popularity of cremation in the late Heian period (late 12th century), Tokoname funeral urns came into production. They were originally very large in size but grew smaller through the years as the quantity of the urns increased. During the 14th-15th century, demand for these items declined and production shifted to making household items which ushered in the commercialization of Tokoname-ware.

The city is known for its small, burnished red, side-handles teapots created by artisans who have settled in this area. They are today used for a variety of uses, from tableware to teacups, pipes, flower pots, and what many people consider as the best bonsai pots in the world.