When you were a student growing up, did your school have uniforms? Most schools in Japan do! Japanese school uniforms, called seifuku (制服), were introduced to Japanese private and public schools in the late 19th century. The uniform traditionally consists of a military-styled uniform for boys and a sailor outfit for girls, but Western-styled Catholic-school uniforms are also very common. In addition to following the dress code, students are not usually supposed to have makeup, piercings, or crazy hairstyles, or unnatural hair colors. It’s a very pure and natural look, and it has become an iconic symbol of Japanese youth and culture!

Japanese school uniforms first originated during the Meiji era, when Meiji Emperor opened Japan to a number of western countries for trade and business. Before that, Japanese students just wore traditional formal clothing to school, as students at that time were typically from relatively wealthy families. Girls wore kimono and boys wore hakama. 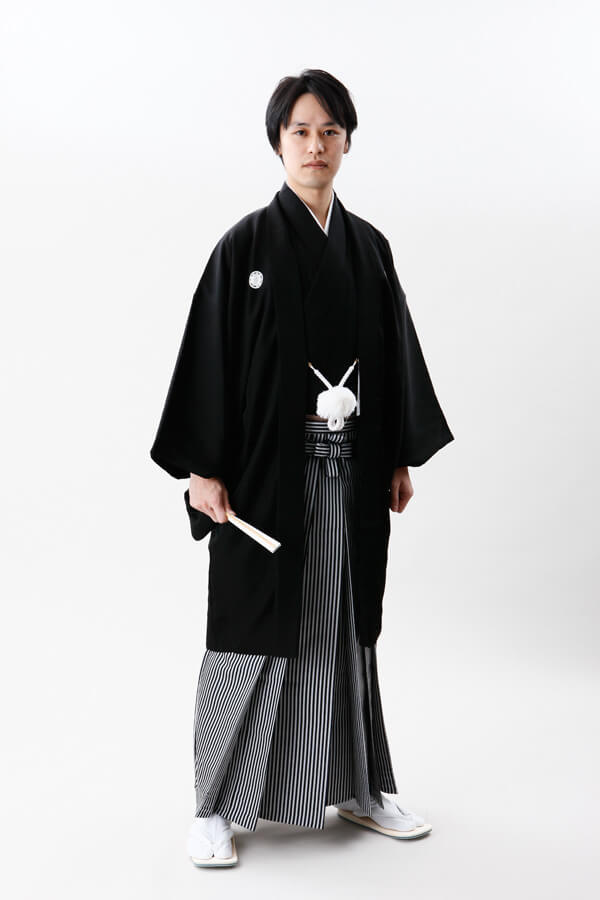 Towards the end of Meiji era and the beginning of Taisho era, Japanese culture began to mix with Western culture as a result of the newfound influence from foreign countries. This mixture took many forms and resulted in a new variety of products, technologies, fashions, subcultures, and ways of life. One of the noticeable influences was in the transformation of Japanese school uniforms.

Boys started to wear a uniform called a gakuran. It was made up of a hat, a black top with a stand-up collar, five golden buttons, and black straight-legged pants. It is actually the same uniform that boys continue to wear to this day, but back when it was first introduced in the Taisho era, the Japanese boys wore it with geta (wooden platform sandals) on their feet.

As for Japanese school girls, they began to wear colorful hakama that were different from men’s wear, as they were specially designed for females to wear. Girls wore them with leather boots and a bow tied in their hair, and this style of school uniform became incredibly popular among school girls during the Taisho era. Unlike the boys uniforms, which continue to use the gakuran to this very day, the girls’ school uniforms underwent an incredible number of changes as the decades passed and the trends changed. Soon, hakama were out and the military-styled naval uniforms were in, and are in fact still quite common in present day. Then, the Catholic-school-influenced plaid skirt and blazers with high socks was the next uniform movement to sweep the schools of Japan. 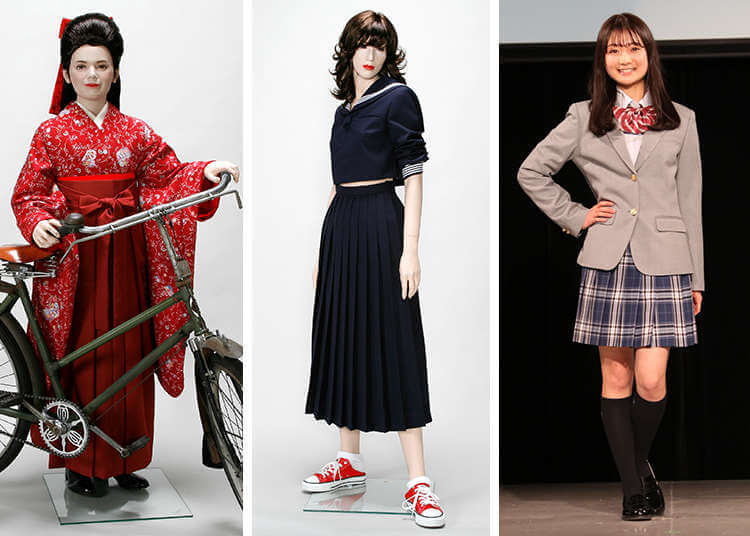 Regardless of what type of uniform any particular school assigns its students, all schools have a summer version of the uniform, as well as a winter version. The summer uniform is quite simple and light, as the summer months in Japan are notoriously hot and humid. They usually consist of a white dress shirt and slacks for boys, and a light blouse and skirt with a tie for girls. Students also have a casual sports uniform for physical activities and club practices. Winter uniforms are less casual and more professional, and are made from heavier material and come with blazer jackets to keep the students warm.

Depending on the discipline level of any particular school, students may often wear different seasonal and activity uniforms within the same classroom during the day. Certain schools also regulate student hairstyles, footwear, piercings, and book bags, but these particular rules have become slightly more relaxed in the modern times, and at some schools are only adhered to on special occasions such as school opening/closing ceremonies or school photo days.

It is normal for uniforms to be worn outside of school areas, and you will often see students out in groups in the evenings and on the weekends still dressed in their school uniforms. As for the younger kids, although not many public elementary schools in Japan require uniforms, many private schools and public schools run by the central government still do so. 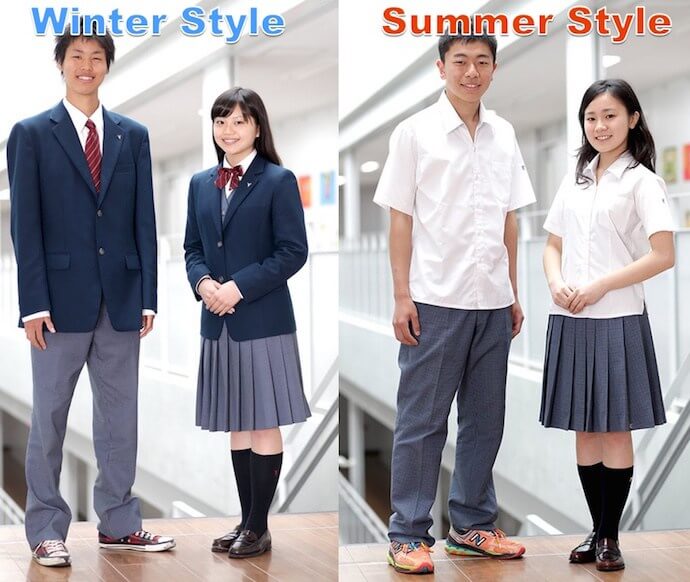 When you think of Japanese schoolgirls, you likely picture them in sailor uniforms. Seira fuku (セーラー服 ) is a common style of uniform worn by female middle school students, occasionally by high school students, and even rarely by elementary school students. It was first introduced as a school uniform in 1920 in Heian Jogakuin (平安女学院) and 1921 by the principal of Fukuoka Jo Gakuin University (福岡女学院), Elizabeth Lee. The sailor design was modeled after the uniform that was bring used by the British Royal Navy at the time, which Elizabeth Lee had seen firsthand when she had been an exchange student in the United Kingdom.

The uniform typically consists of a blouse with a sailor-style collar and a pleated skirt. As mentioned, the uniforms change slightly in the summer summer and winter, so depending on the season, the sleeve length and fabric are adjusted accordingly. A ribbon is tied in the front and laced through a loop attached to the blouse. Although seira fuku does all generally follow a similar design, the ribbon collar can vary, sometimes instead having neckties, bolo ties, neckerchiefs, and bows. The most common colors are navy blue, white, grey, and black.

The shoes, socks, and other accessories are sometimes included as part of the school’s regulated uniform. The socks are typically navy or white, and usually come up quite high. Shoes are generally brown or black penny loafers.

Today, the sailor uniform is usually associated with junior high schools, since a majority of high schools have adapted the more Western-style plaid skirts or blazers. 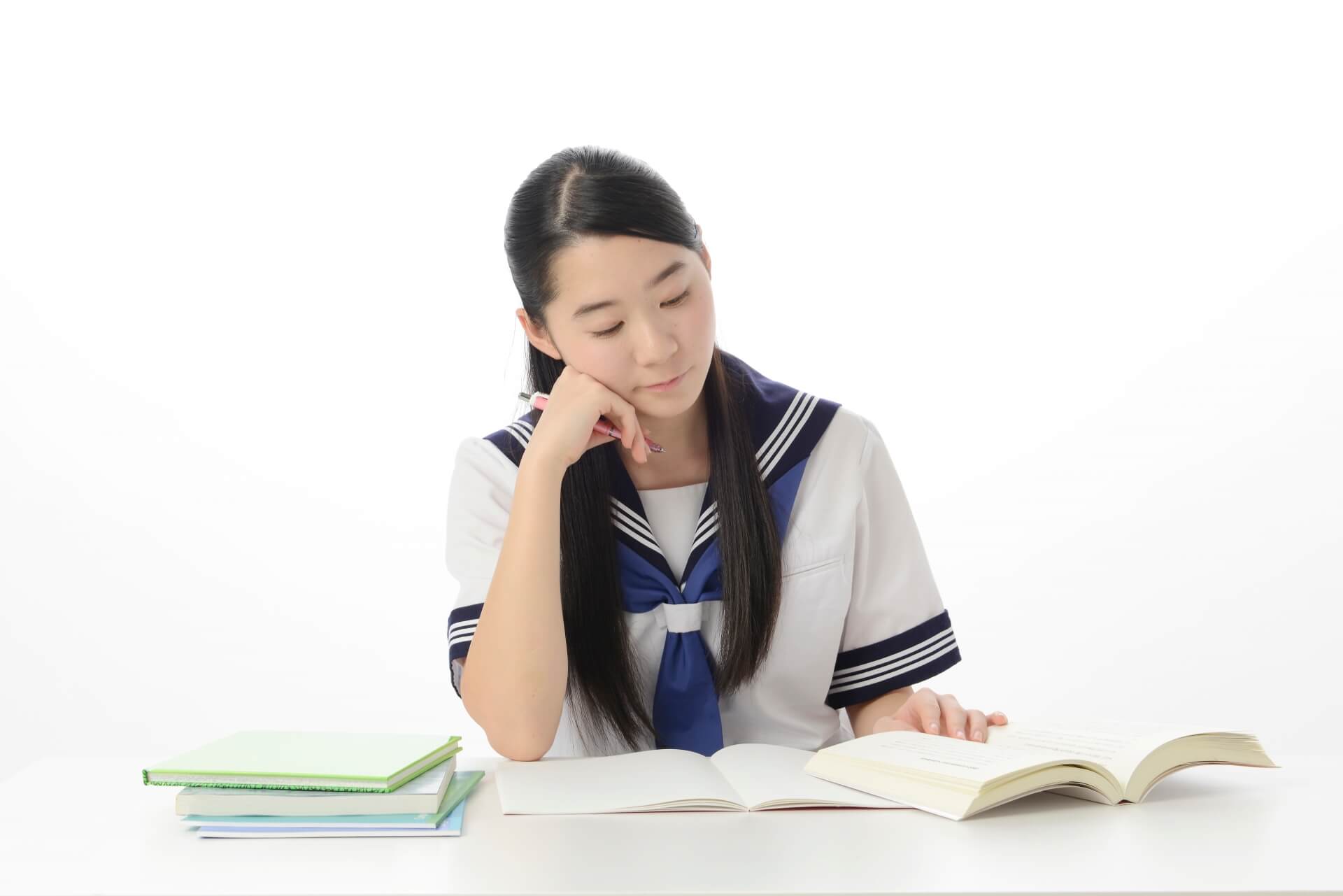 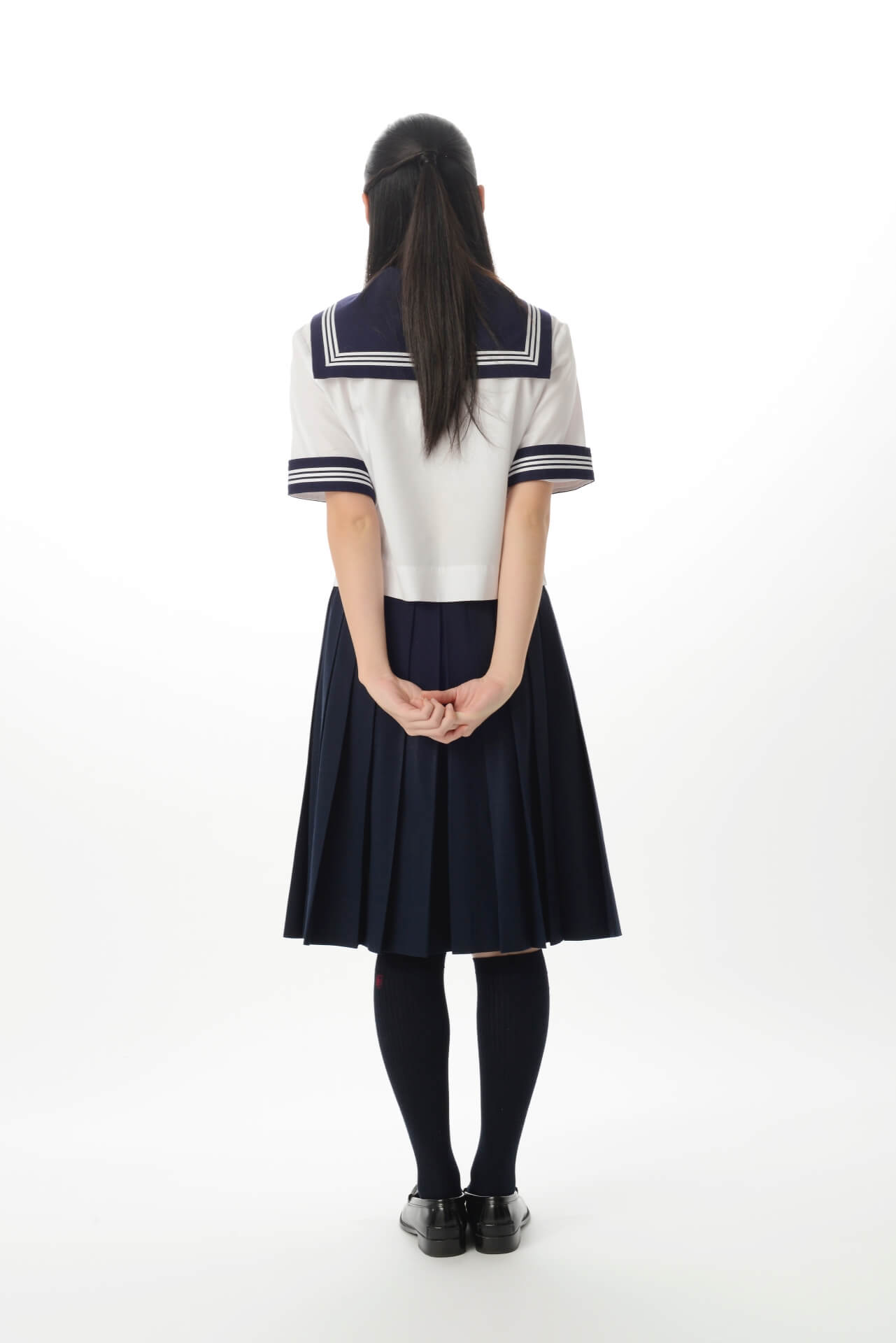 Japanese boys at most public and private schools in Japan wear unique uniforms as well. By far, the most common uniform for boys is the gakuran (学ラン). It consists of a square-shouldered top with a stand-up collar, five golden buttons, and black straight-legged pants.  The color of the uniform is normally black, but some schools use navy blue.

The gakuran is derived from the Waffenrock, a military uniform that was introduced to Prussia in 1842. The term gakuran is a combination of gaku (学) meaning “study” or “student”, and ran (らん or 蘭) meaning the Netherlands or, historically in Japan, the West in general. Therefore, gakuran literally translates as “Western student”.

The uniform has a standing collar top that buttons down from top-to-bottom, and straight-legged pants that are worn with a dark-colored belt. As for the shoes, boys usually wear penny loafers or sneakers with this uniform. Some schools may require the students to wear collar-pins representing the school and/or class rank. Traditionally, the gakuran was also worn along with a matching (usually black) cap, but this custom is less common in modern times.

The buttons, typically gold-colored, are usually decorated with the school emblem. The second button is the one closest to the heart, and it’s common practice for a boy to give the second button from the top of a his uniform to a female he is in love with, as a sort of confession. This practice was apparently made popular by a scene in a novel by Taijun Takeda. 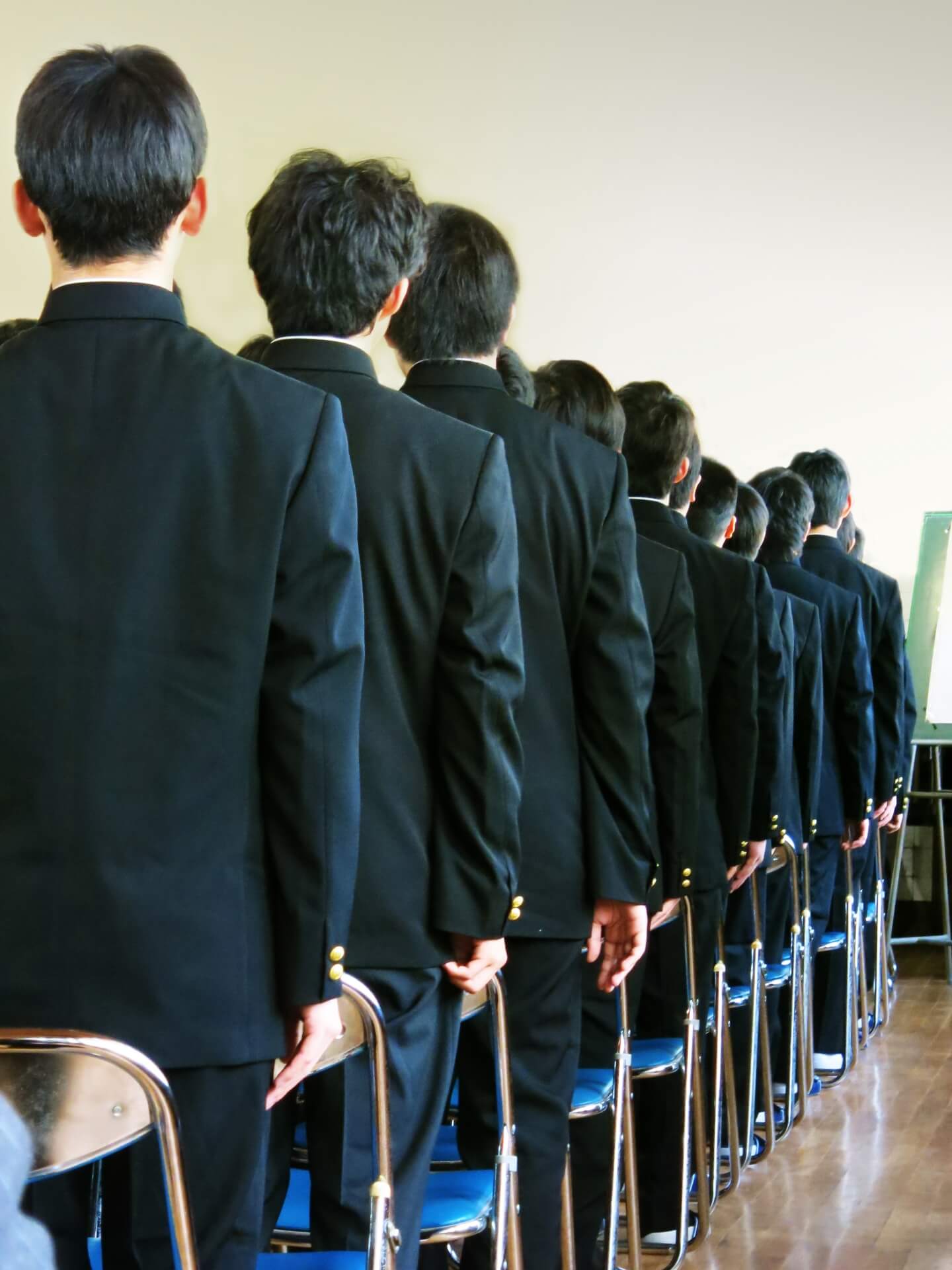 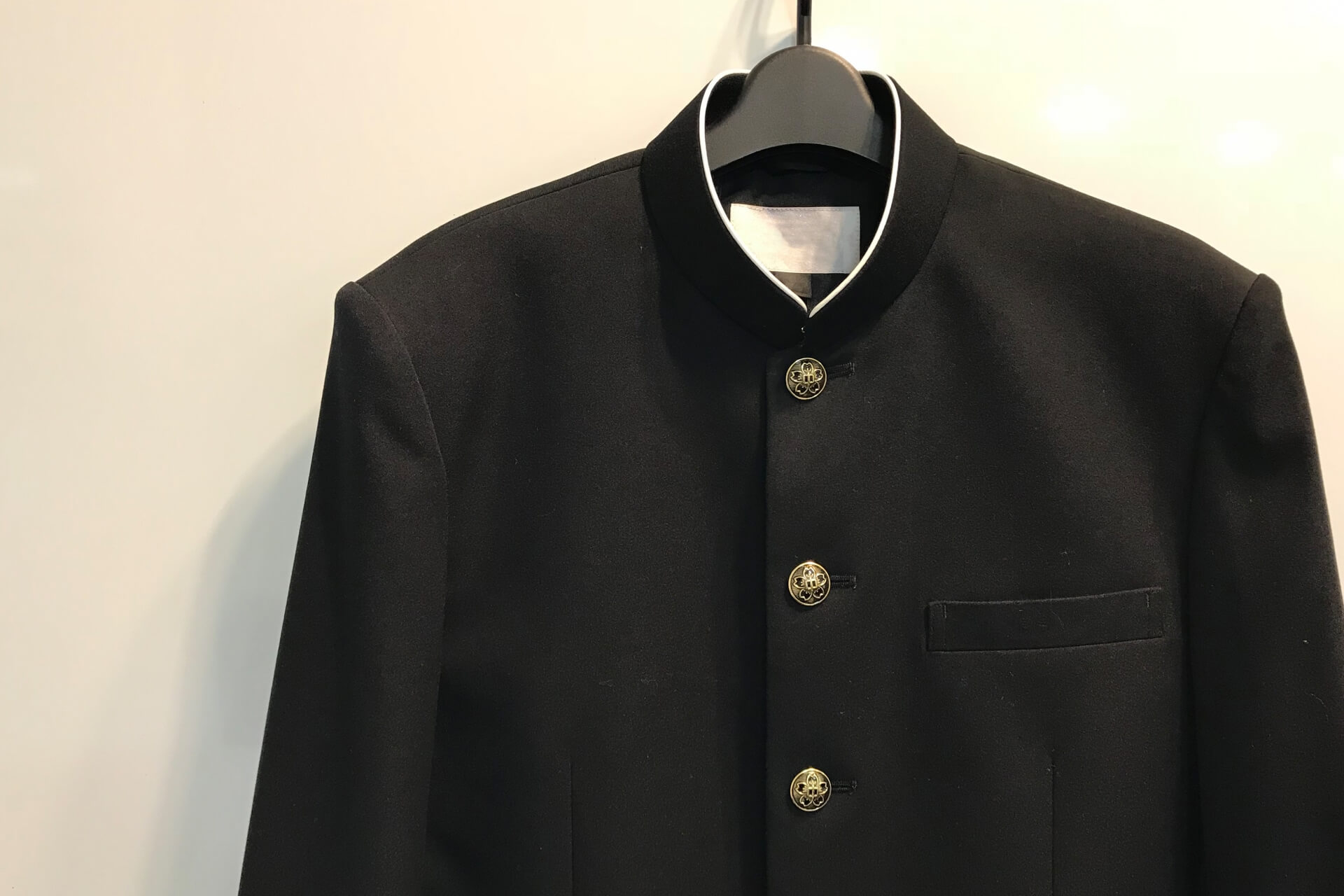 While these seira fuku and gakuran styles of uniforms are still quite common today, many schools these days have moved to more Western-pattern catholic school uniforms. These uniforms consist of a white shirt, a tie, a blazer with the school crest, and tailored trousers for the boys and a plaid skirt with high socks for the girls.

These days, various schools are known for their particular uniforms. For former students, school uniforms can have a nostalgic characteristic, and are often associated with relatively carefree youth. For current present-day students, uniforms are sometimes modified as a means of exhibiting individualism. Students may try to create their own trends by shortening the skirt, removing the ribbon, wearing small patches or badges under the collar, or even wearing subtle amounts of makeup. However, this isn’t just a current trend – there have always been young people who have sought to express a little originality by bending school uniform rules.

Just as with mainstream fashion, student school uniforms experience a wide range of trends that change over time. In the 1990s, it was considered fashionable for high school girls to wear very long and baggy “loose socks”, often pairing them with an extremely short skirt. It was around this same time that loose clothes were also popular with boys, who aimed to imitate American rappers by wearing oversized shirts and pants. These days, the current trend is for pastel colors and slim-fit designs that create a more simple and pure look for girls, who aim to achieve a thinner figure. Black knee high socks are also a current trend, as they elongate the legs and make them look more slender. There is a line to be draw, however, between school uniforms and fashion, as seen in the case earlier this year, when one elementary school in Tokyo caused an outroar after announcing a plan to adapt $729 uniforms that had been designed by the Italian luxury brand Armani.

But actually, in the most modern development of Japanese school uniforms, more and more junior high and high schools are starting to not even require uniforms at all. In these cases, it is common for students to wear smart clothing that follows  dress code and looks like a uniform, but yet allows for individual expression. However, that trend is still limited to a small number when compared to the entire Japanese school population. Japanese uniforms continue to maintain their reputation and receive international attention, as even to this day, there are specialist shops for stylish school outfits that are popular with high school girls―and even foreign tourists.

Japanese school uniforms are likely to remain an iconic symbol of youth and Japanese culture for years to come. 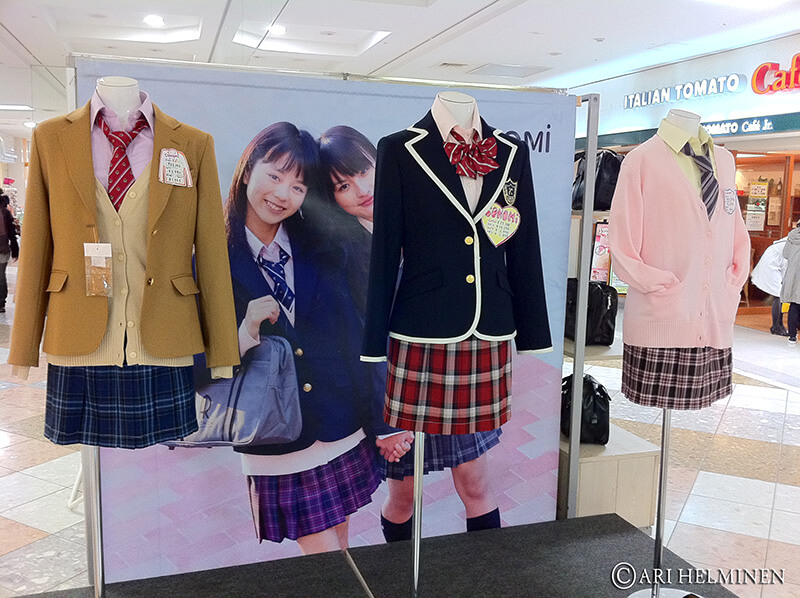