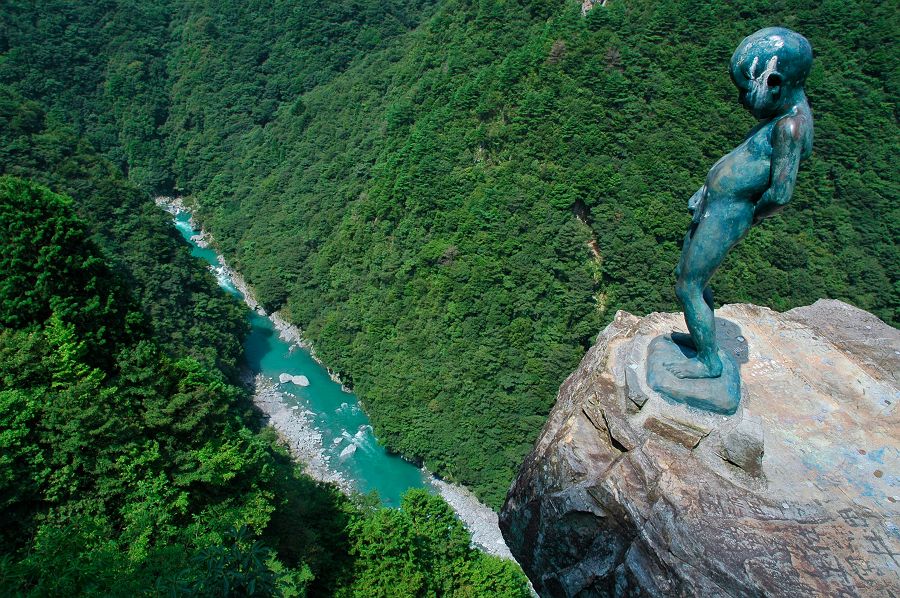 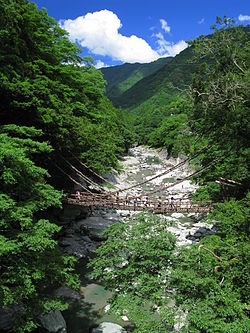 “The Iya Valley  region in Tokushima Prefecture, Japan is a scenic area known for its dramatic mountain valleys, thatched roof farmhouses and historic vine bridges. Although access has improved in recent years, the Iya Valley and the inner parts of Shikoku have historically been remote and difficult to enter, making them a favorite retreat for refugees and defeated warriors.”   -wikipedia 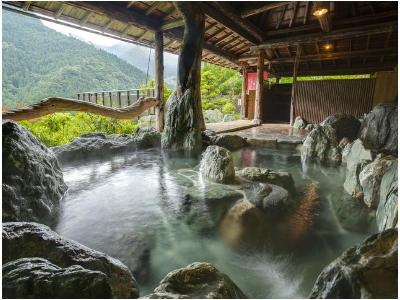 By plane
There are four airports on Shikoku Island, and the central location of the Iya valley makes all of them viable options if you intend to include other sights in Shikoku. Cars can be rented at any airport.
The closest airport to the Iya valley would be Kochi Airport (total 1.5 hours to Oboke via airport shuttle bus with express train) though the flight options are limited (mainly just Osaka and Tokyo).
Takamatsu Airport has more flight options, including international routes, and is about 2 hours away by shuttle bus and train to Oboke.
Tokushima Airport, though in the same prefecture as the Iya Valley, is actually fairly far and has only a limited amount of flight destinations. Expect 2.5 to 3 hours by bus/train combo.
And Matsuyama Airport has the most flight options, both domestic and international, but is the farthest of the bunch. Plan on at least 3 hours by public transport or a bit faster if driving and taking the highways.
For real international connections, Kansai Airport near Osaka is the way to go. Buses go from central Osaka to Awa-Ikeda station several times a day (4 hours).
By train
The nearest train station to the main sights of the Iya Valley is at Oboke, which is along the JR Dosan Line between Kochi and Takamatsu. There are several local trains to Oboke throughout the day, and hourly express trains from either Kochi city or from Awa-Ikeda (connecting to Okayama/Takamatsu or Tokushima city.) The hourly Nanpu which runs from Okayama stops here (1 3/4 hours, ¥4410).
From Oboke you can connect to a bus up the mountain and through a tunnel into Nishi-Iya, but services are infrequent: there are up to eight buses per day on weekends only in the high season (April-Nov), and as few as four per day the rest of the time. Taxis from the station can also be arranged but prices are not cheap since the drives to points in the valley can be far.

Map of the Iya Valley, Japan
For those looking to enter into the lower reaches of the valley (Iya Gorge, Matsuogawa Onsen, Iya-Kei Camp Village) one can instead get off at Iyaguchi Station (祖谷口駅) for more direct access, and hitch a ride or take one of the few daily buses that pass through the lower valley from here.
By bus
From Osaka or Kobe, Hankyu Bus runs several a day that go to Ikeda’s Awa Ikeda Bus Terminal (阿波池田ＢT) just near Awa-Ikeda station. The trip takes about 4 hours and runs at about ¥4500.
There are several buses daily from Ikeda’s Awa Ikeda Bus Terminal (阿波池田ＢT), which pass by JR Ikeda Station (one minute away) and travel to the Iya valley in various ways. Some terminate in Deai (Iya Gorge area), some terminate in Nishi-Iya at the Kazurabashi (かずら橋), and a few continue all the way into Higashi-Iya and terminate in Kubo (久保). If you wish to enter via the Iya Gorge, be sure to take a bus that goes via Deai and continues to Nishi-Iya. There are also four buses on weekends/holidays only (Apr-Nov) that travel between JR Oboke Station and the Kazurabashi only. For a complete timetable, see Yonkoh for a timetable, in Japanese only; select “祖谷線” (the Iya Valley line) and then look for Awa Ikeda (阿波池田ＢT) or Ikeda (池田駅前) departure times.