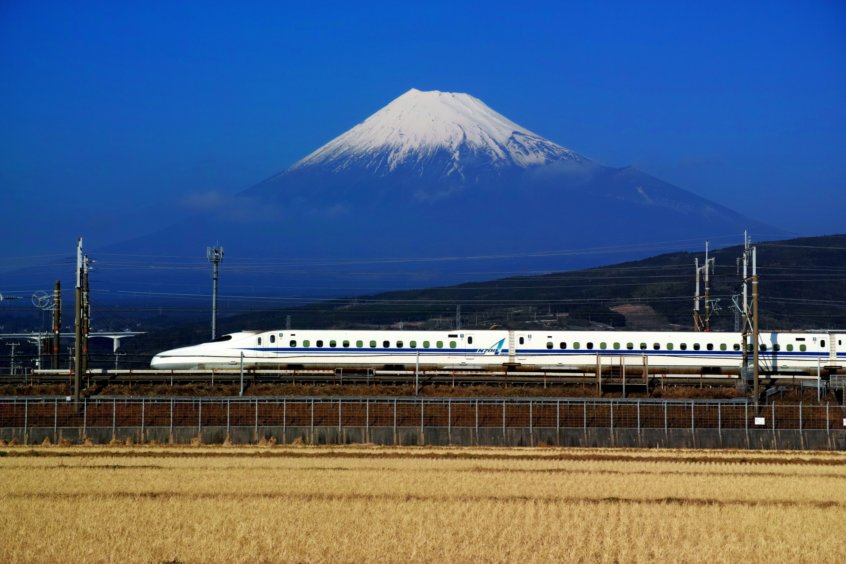 Japan’s public transportation system is known for being one of the most advanced and reliable in the entire world! If you’re visiting Japan, the train system is an especially convenient and affordable way to travel. Here’s everything you need to know about taking the trains in Japan.

The vast majority of trains in Japan are owned and operated by the Japan Railways (JR) Group, which is made up of six independent companies: JR Central (JR Tōkai), JR East, JR West, JR Kyūshū, JR Hokkaidō & JR Shikoku. Together, these companies cover all of the major regions of Japan. 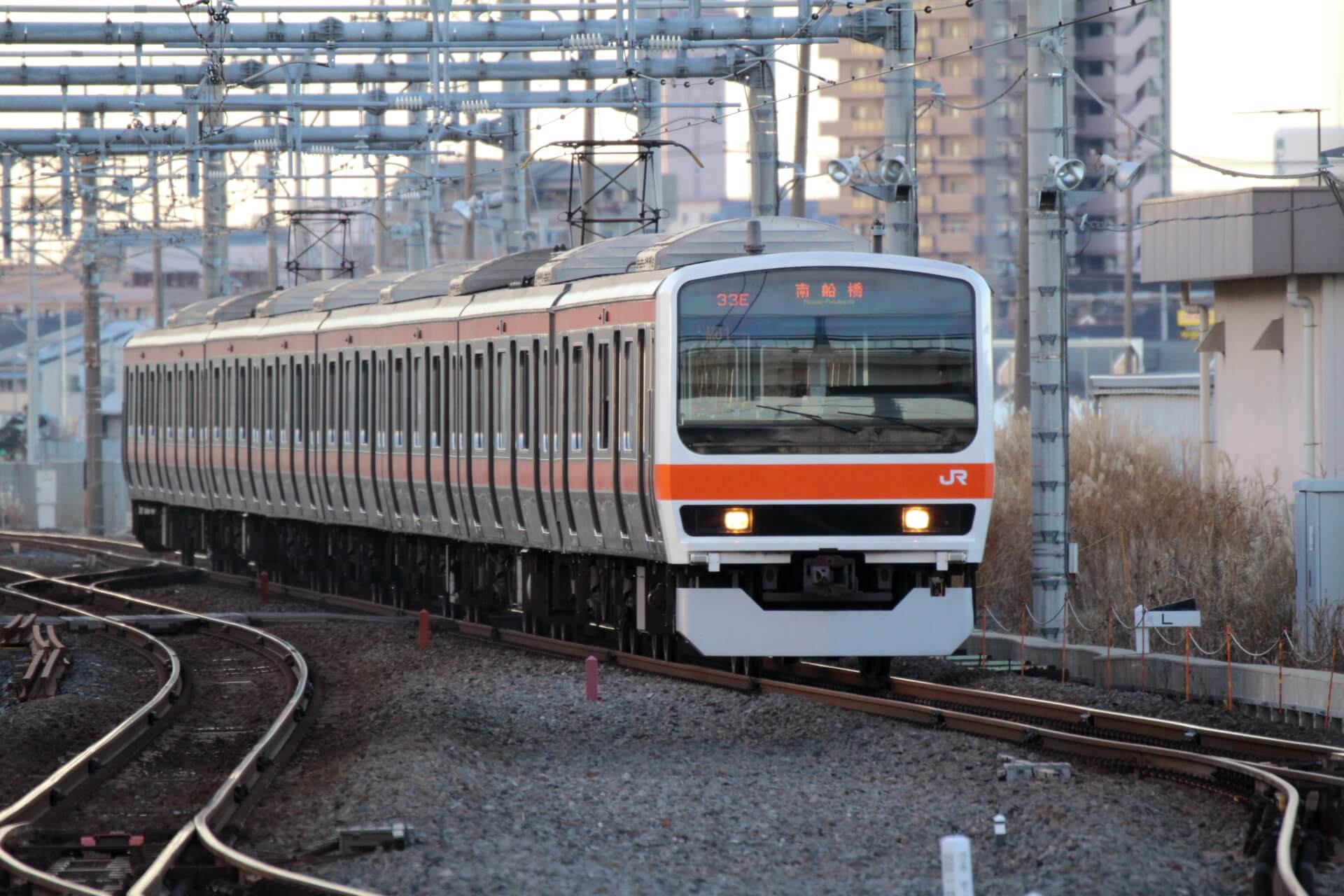 The trains in Japan’s public train system come in many different sizes, travel at different speeds, vary in number of stops, and are also different prices. Here’s a list of common trains you’ll find in Japan, in order from slowest to fastest.

Common in all Japan:

普通 Futsuu – Local trains; They are the cheapest and most commonly used by locals traveling short distances in and around their towns.

急行 Kyuukoo – Express train; There is generally no difference in the ticket price between local and express trains, they just stop at fewer stations and therefore go faster.

特急 Tokkyuu – Special express train (named after 特別急行) that stop only at major stations; Depending on the railway company, you may be required to purchase a Tokkyuu ticket（特急券), as these trains are usually all reserved seating.

快速  Kaisoku – Rapid train; A slightly faster way to get around a city or town, as they skip some stations. There is no difference in the ticket fare between local and rapid trains.

*Shin-kaisoku is used in JR Tokai and Nishi-nihon (JR West). Extra payment is not required. 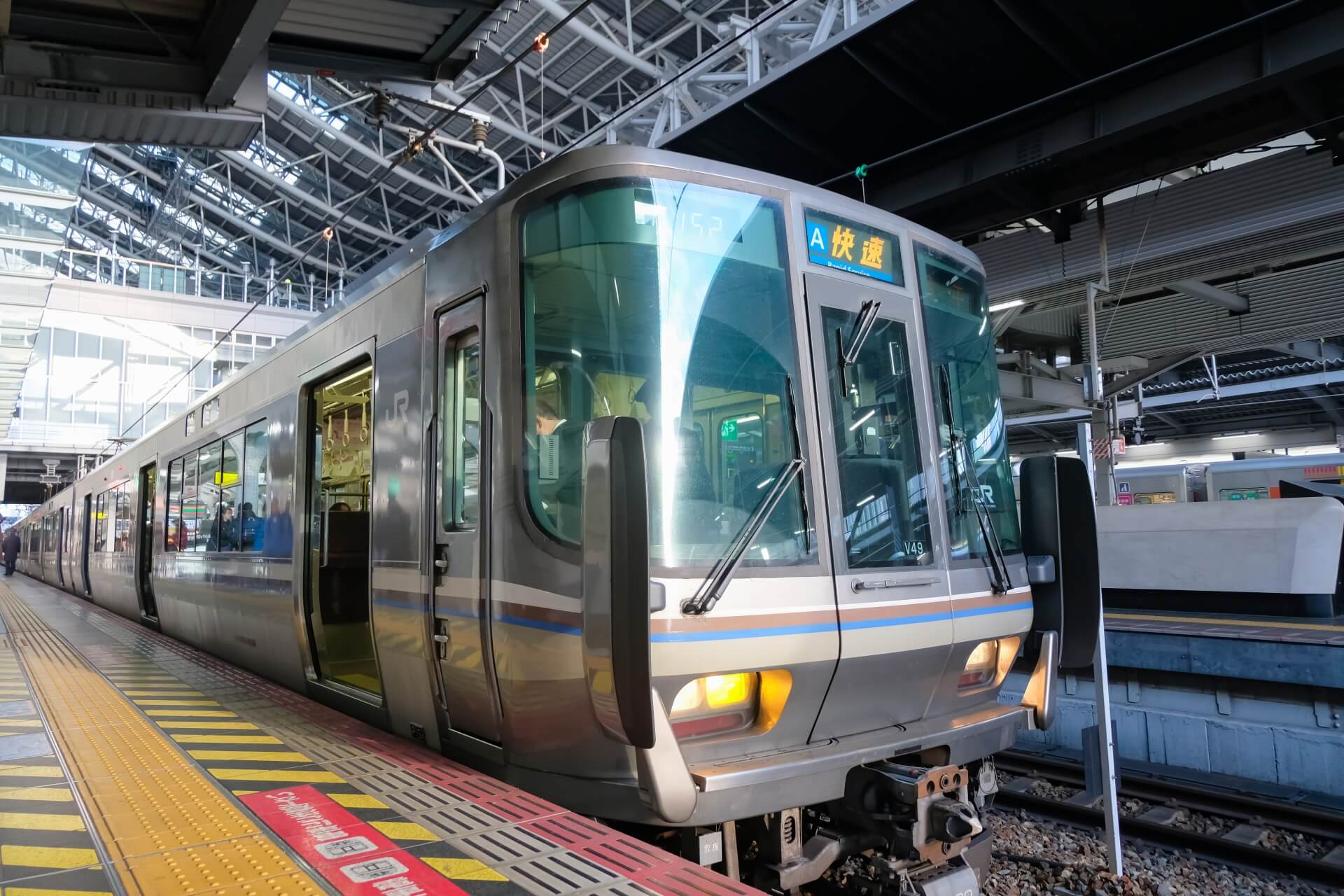 通勤特急 Tsuukin tokkyuu – Commuting special express train; Faster than 特急 as it stops at only limited stations. Runs during commuting time in the morning and evening.

区間快速 Kukan kaisoku – Rapid train that stops at each station within a certain section.

準快速 Jun kaisoku – Semi-rapid train. Stops at more stations than rapid train, and is thus slower than the rapid train.

The Super Express/Bullet Trains 新幹線 (shinkansen) are only operated by JR and use completely separate tracks and platforms. These futuristic-looking trains are some of the fastest in the world, and can take you all across Japan in just a few hours. Shinkansen tickets are understandably the most expensive, and have both non-reserved and reserved seating. 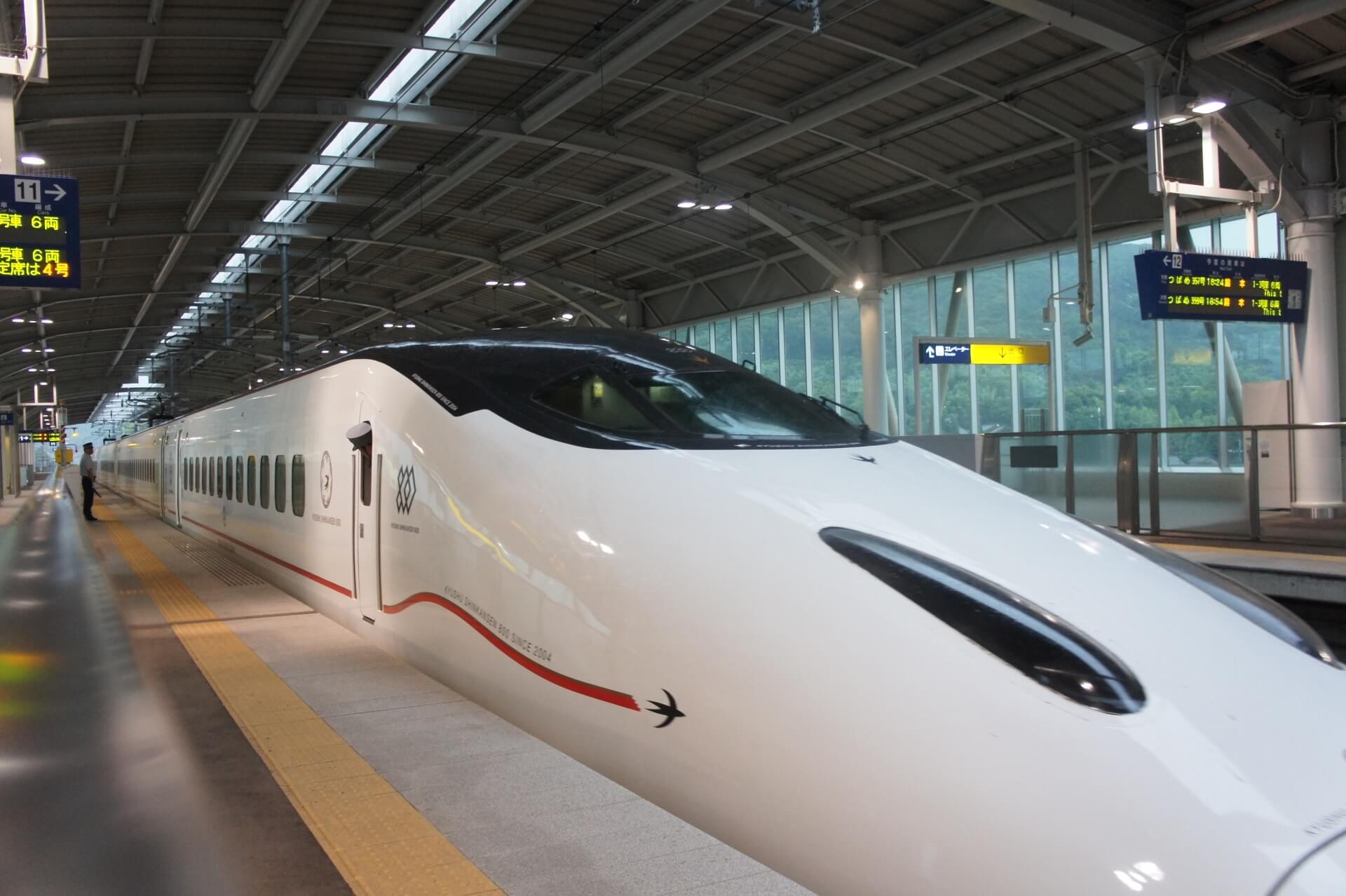 On the long-distance trains like the Shinkansen, JR offers the choice between two classes: ordinary and green (first class) seats. Green cars are less crowded and offer more spacious seats, but are typically 30% to 50% more expensive than ordinary cars.

Most shinkansen and limited express trains carry non-reserved (jiyū seki) and reserved (shitei seki) seats, while a few carry reserved seats only. Seats in green cars are often all reserved.

On most local, rapid and express trains, all seats are non-reserved.  The seats of these cars are open for anyone to sit anywhere, and those who can’t find a seat just have to stand. Standing on the trains isn’t too bad, though, as there are plenty of hanging straps called tsurikawa (つり革) as well as poles for passengers to hold onto. Whether you’re standing or sitting, you can put your belongings on the metal overhead shelves. Just be sure not to leave them behind when you exit the train! 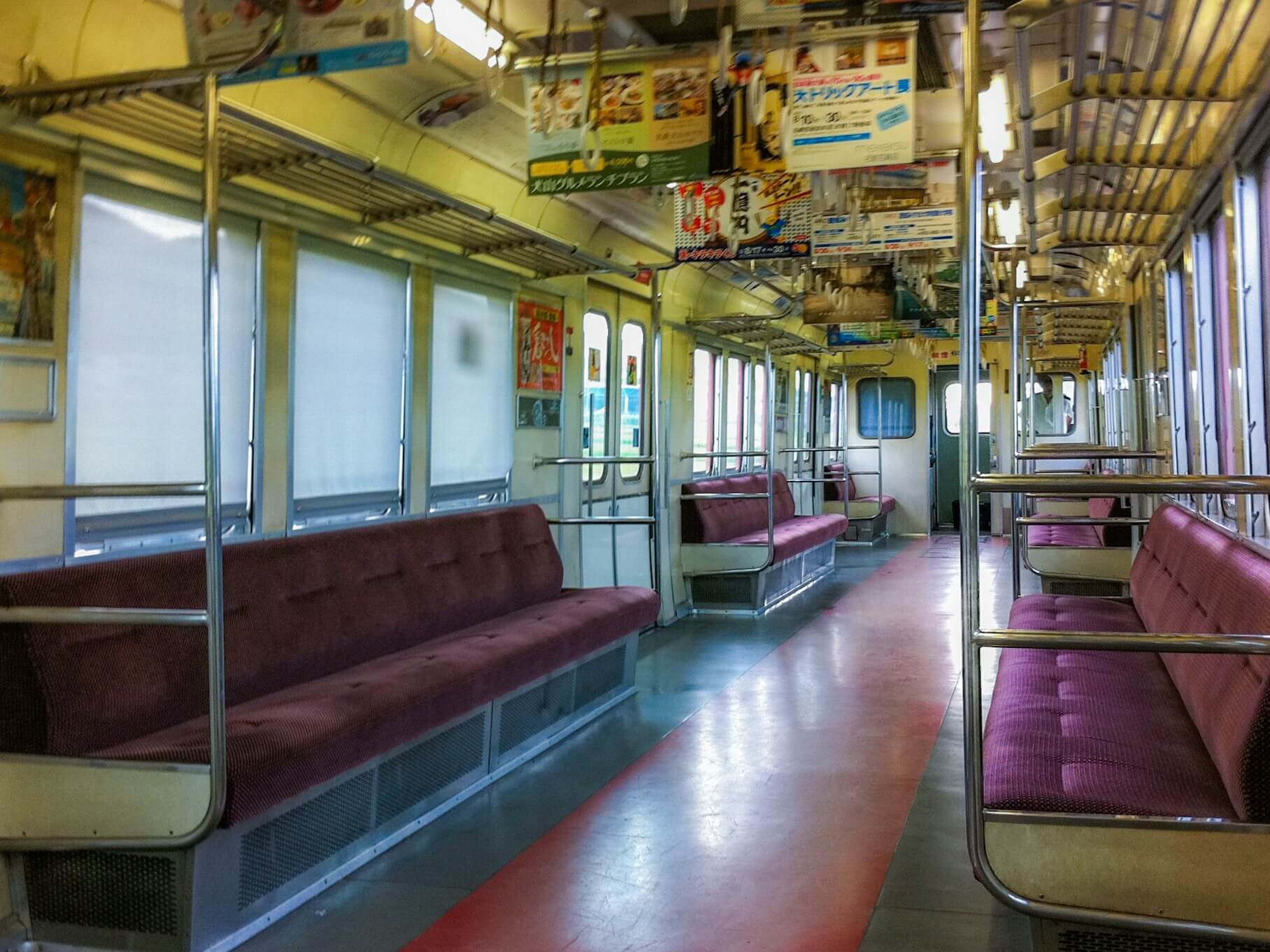 Unreserved seats on a local train. 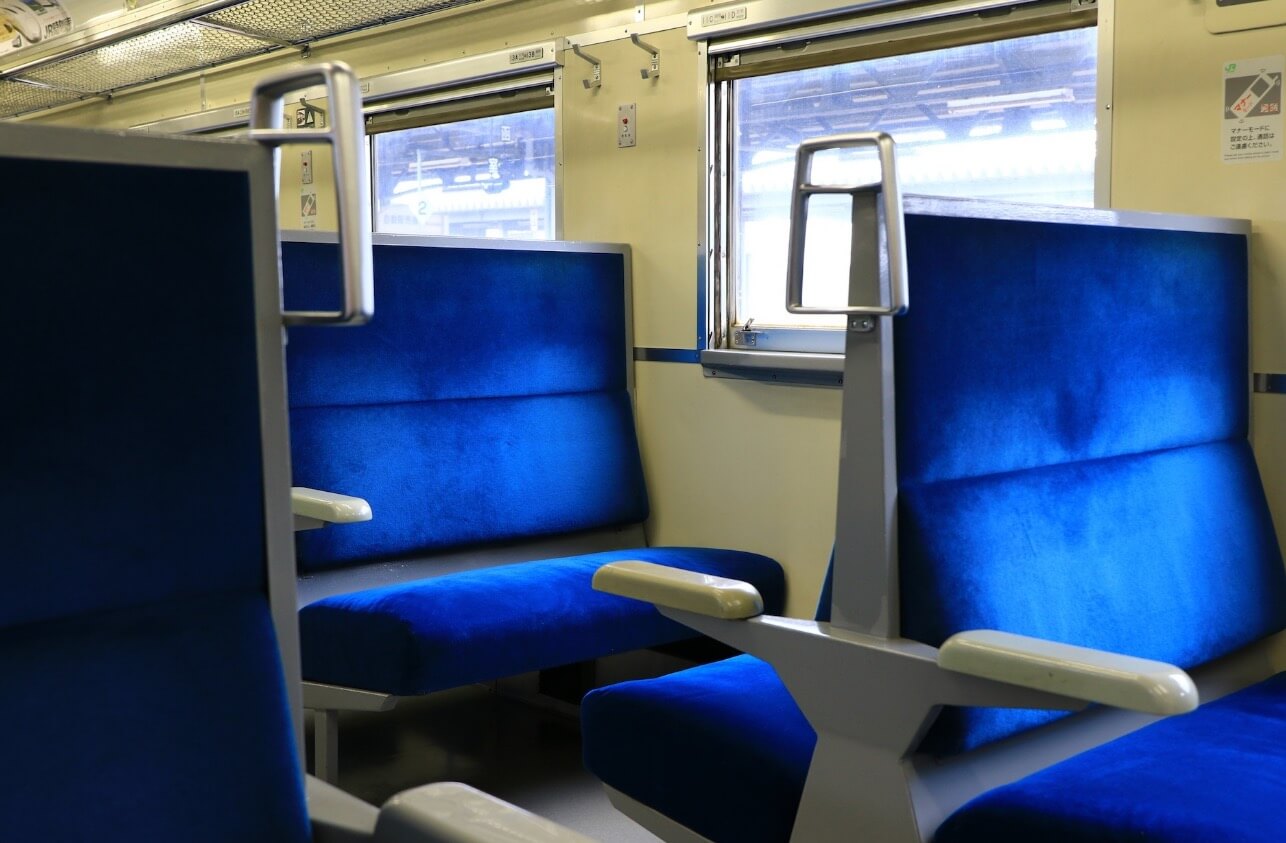 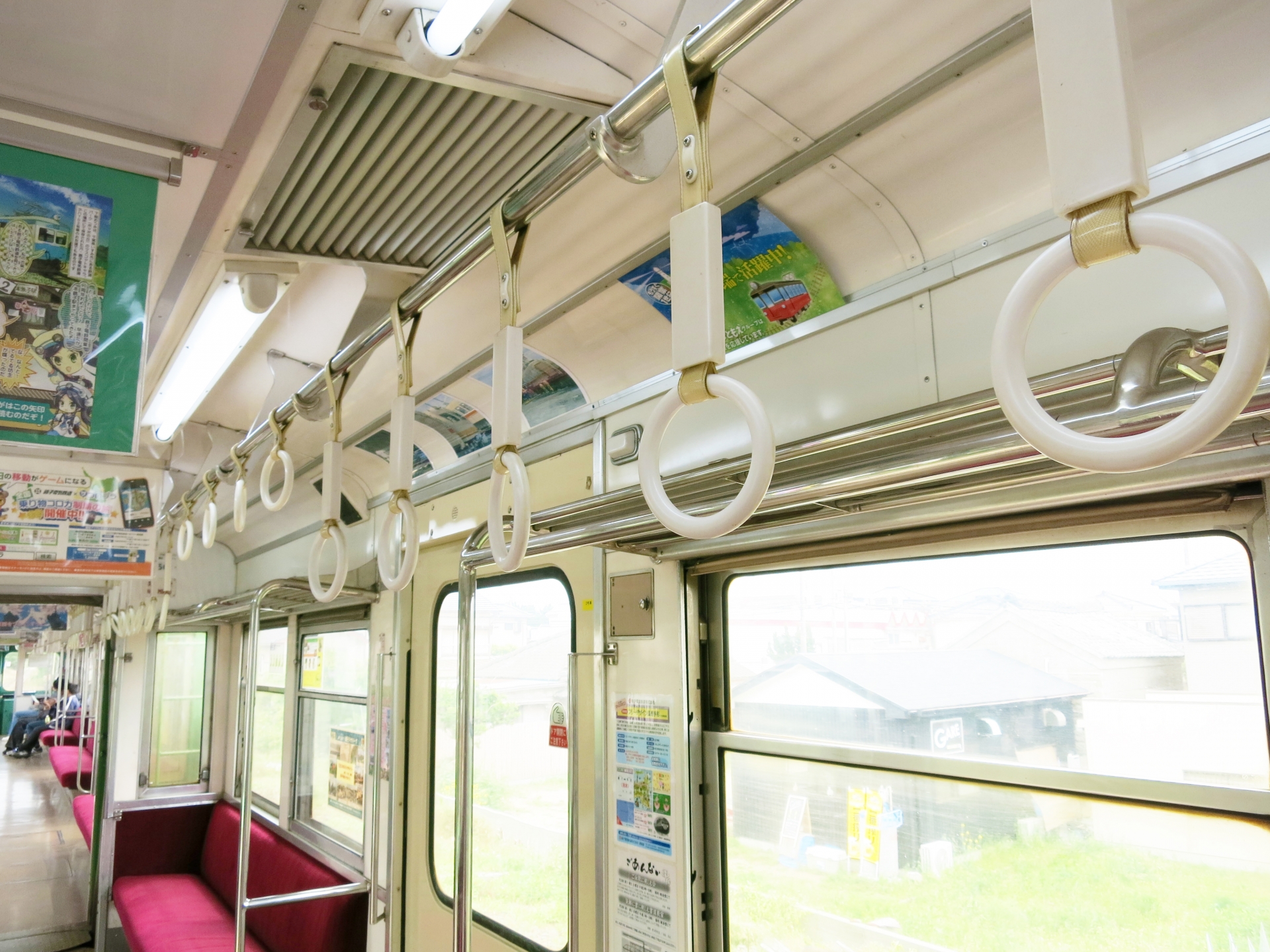 Feel free to hold the straps and place your bags on the metal overhead shelves!

Train tickets can either be bought at a vending machine (for short-distances) or at a ticket counter (for groups and long distances).

Vending machines are the quickest, easiest way to purchase tickets. In virtually all stations, there is a map above the ticket machines. This map shows the train lines and stations in the area, as well as the ticket prices beside each station. Before you approach a machine, first find your destination and the corresponding fare amount on the map so you know how much your ticket will be. 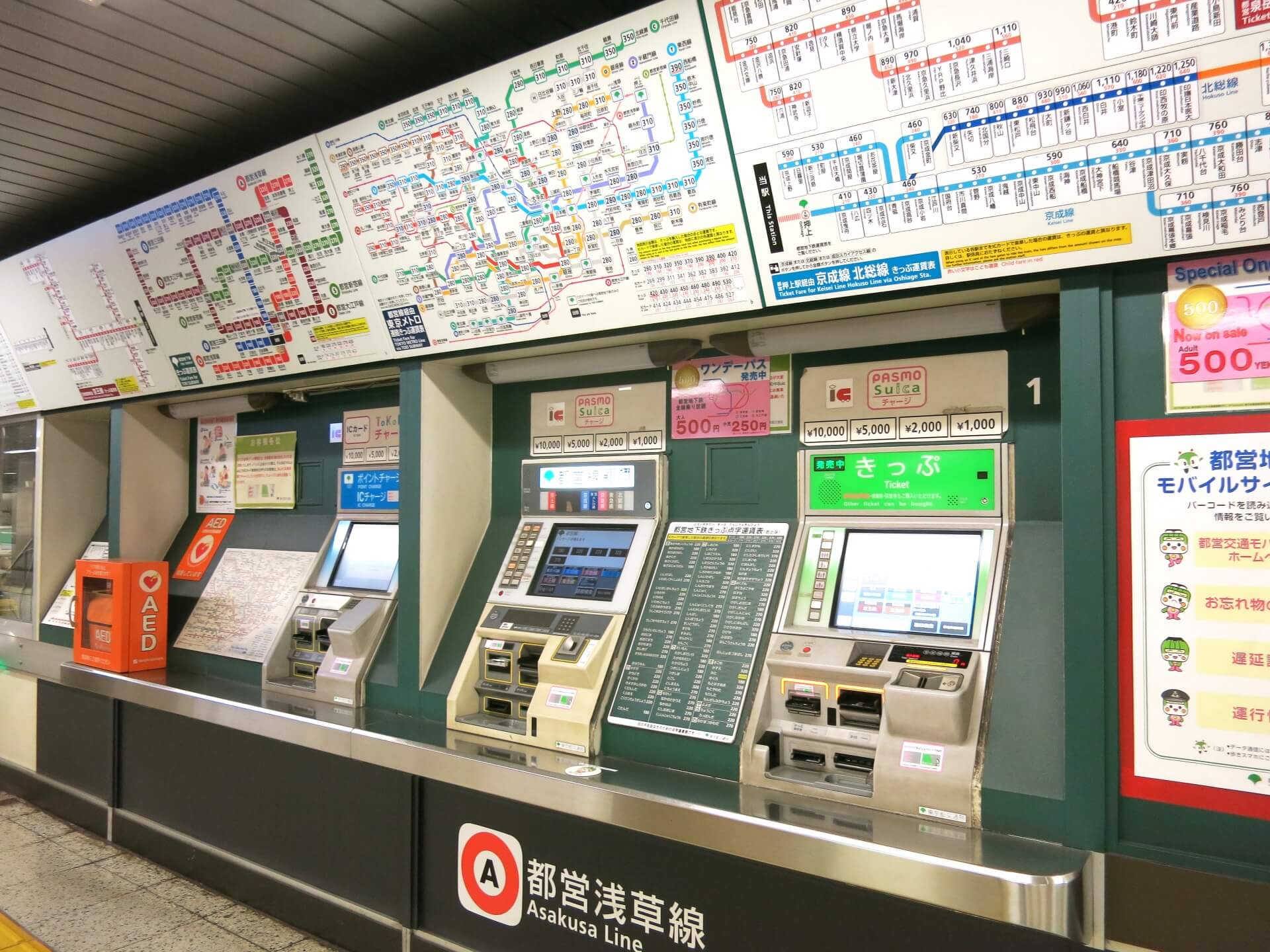 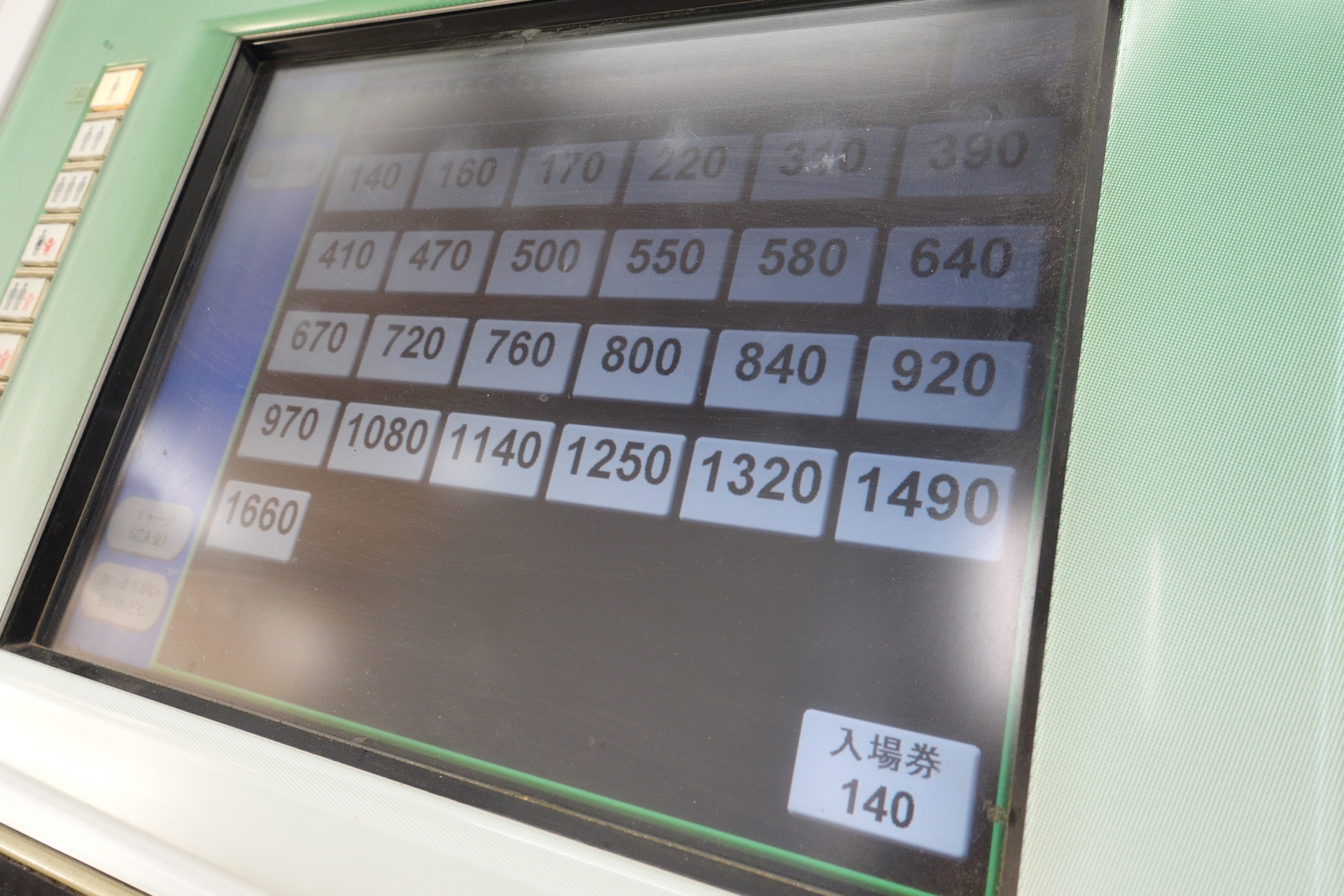 Tickets can also be purchased at ticket counters. Ticket counters have staff on hand who can help travelers buy long-distant tickets or special passes/discounts. Ticket counters tend to take a little longer due to lines, but can be helpful for tourists who have any questions.

For people who plan on riding the train daily, or even multiple times a day while they are in Japan, purchasing an IC Card or JR Pass is a good idea. IC cards are rechargeable cards that can be used to conveniently pay fares on public transportation. They can be purchased at ticket machines and ticket counters at the corresponding railway stations. The initial cost consists of a refundable deposit of 500 yen plus an initial amount (typically 1500 yen) to be charged onto the card. 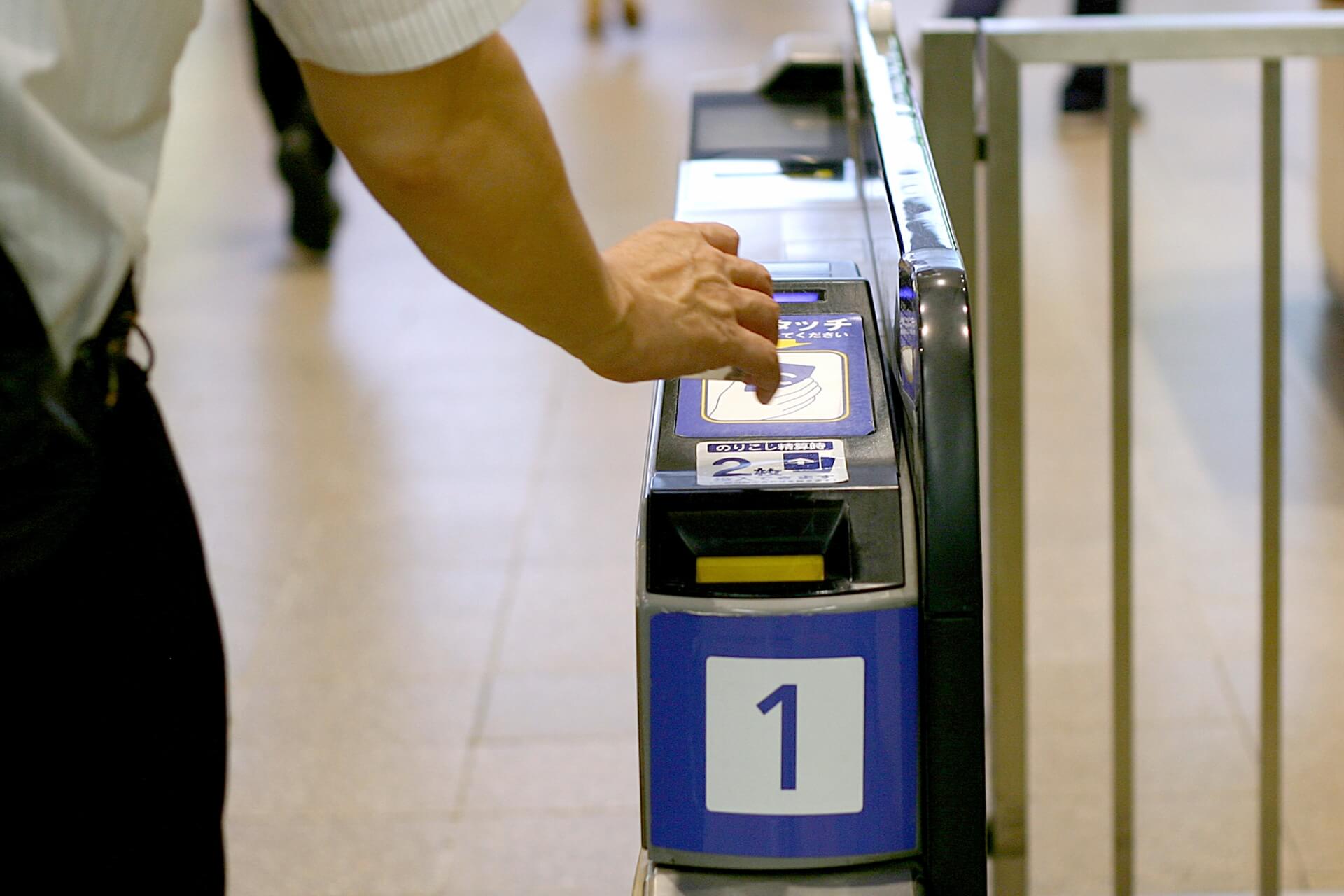 When passing through ticket gates, touch the card onto the card reader as you pass through. The applicable fare will be automatically deducted when you exit through the ticket gate at your destination station. Just like tickets, a card cannot be shared by multiple travelers at the same time.

To recharge a card, IC cards can be recharged at ticket machines and special re-charging machines found at railway stations  near the gates as well as next to the ticket vending machines. The maximum amount to be charged onto a card is 20,000 yen.

We made a video showing you how to purchase IC Cards, charge them with money, and even buy one-way or round-trip train tickets. Check out our 3-minute video guide below:

For visitors to Japan who plan on traveling long distances, the JR Pass offers unlimited travel on almost all JR trains nationwide, including bullet trains, limited express trains, local trains, some JR buses and the JR ferry to Miyajima in Hiroshima. You may want to check our latest blog article on JR Pass: Your Guide to the Japan Rail Pass【Latest Edition 2022-2023】.

After you have mastered buying tickets or refilling your IC Card, you are ready to ride the train! Apps like Google Maps will be very helpful, but train platforms and signs also usually have English in city area. With your ticket in hand, you can go anywhere in Japan!