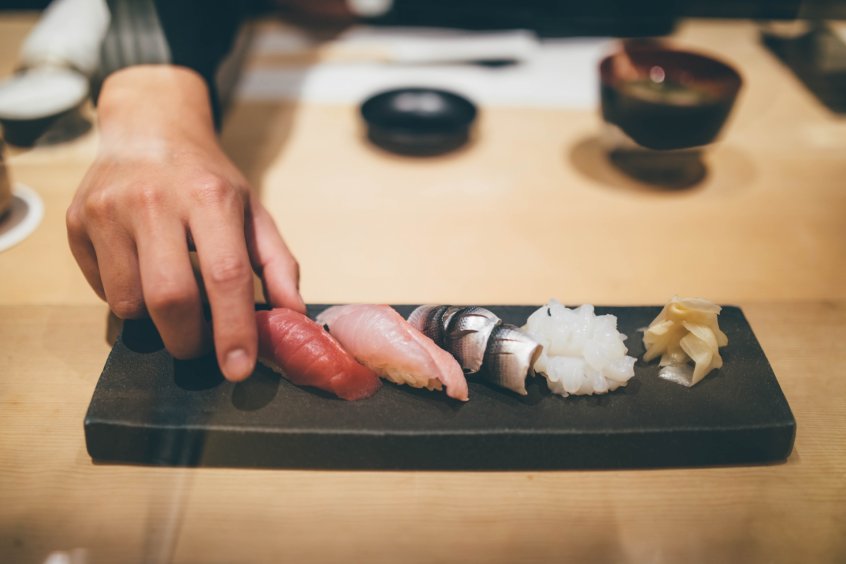 Sushi (寿司) is a classic Japanese food that is enjoyed by people all around the world. Sushi has quite a long history that dates back thousands of years, and also comes with traditional ways to properly consume it. Following these guidelines ensures that you are offering your greatest respects to the sushi chef who worked to perfect the meal, and also makes sure that the sushi is reaching its full flavor potential that the chef intended. Here is your guide to how to properly eat sushi!

Today’s style of nigirizushi (握り寿司), which is lightly vinegared rice topped with a piece of raw fish, originated as casual fast food served at food stalls in the Edo period (1603-1868). Sushi chefs would brush soy sauce and nitsume (or tsume) sauce on top on the sushi they made and place them in front of customers. The customers would quickly eat the sushi with their hands, then drink some tea, wipe their hands on the curtain, then leave the food stall.

Because of sushi’s origins, chatting during the meal and sharing sake with your companions while eating sushi was not customary to sushi restaurants in the Edo period. Today, a few high-end sushi establishments strive to maintain the tradition of Edo-style sushi, which focuses not on the social aspect of eating at a restaurant, but rather, the experience of eating and appreciating the flavor of the meal.

To follow the traditional method of consuming sushi, here is how you should go about eating it:

1. Pick it up with your fingers

Because the finest sushi is hand-made with an extremely light touch, the sushi rice contains a lot of air, and is incredibly delicate. It is not easy to hold, but don’t pick it up with both hands. Use one hand to gently lift it up so that it maintains its shape. 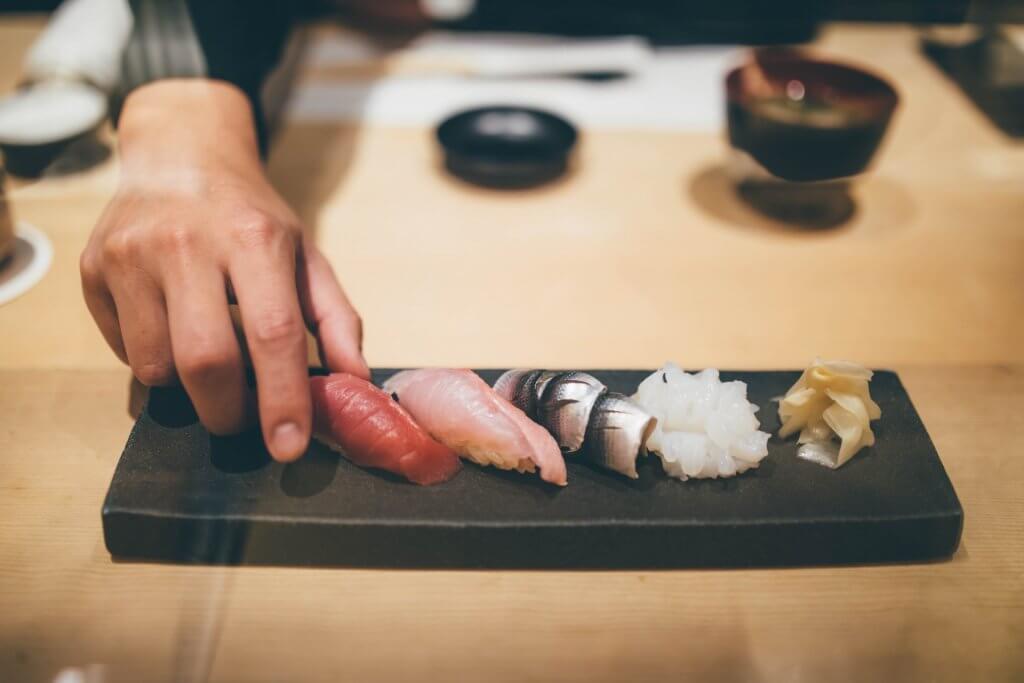 2. Pick it up with chopsticks 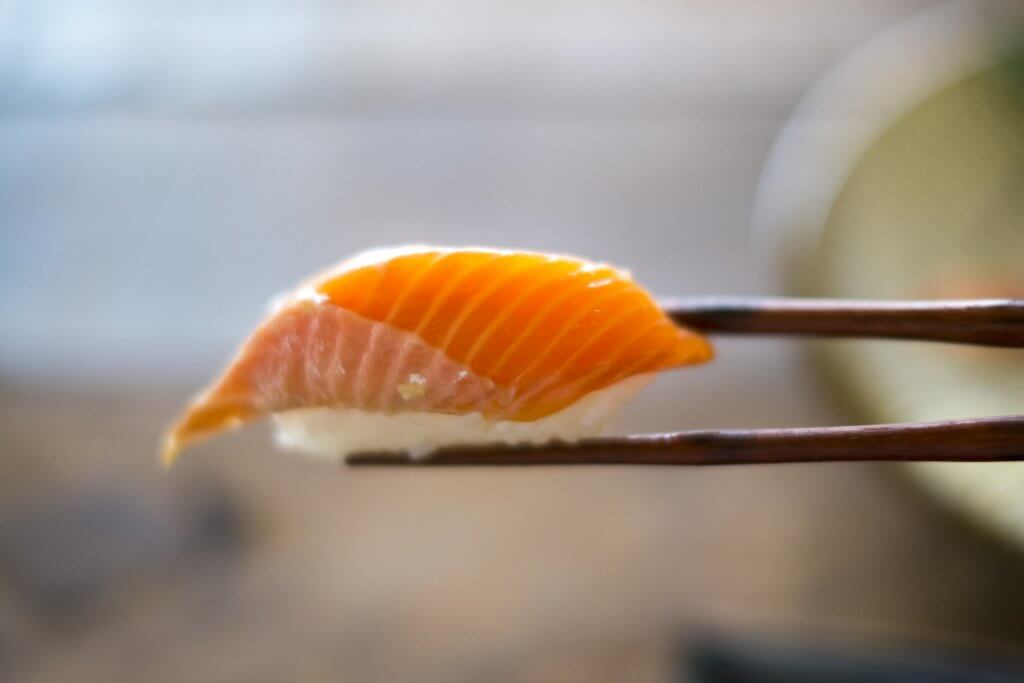 If you pick up a “battleship roll” sushi –gunkan-sushi (軍艦寿司) from above, the sushi topping will fall out when you raise the sushi to your mouth. Instead, lift up the sushi gently by grasping its sides, and eat the entire sushi in one bite. This applies to both using your hand or chopsticks. 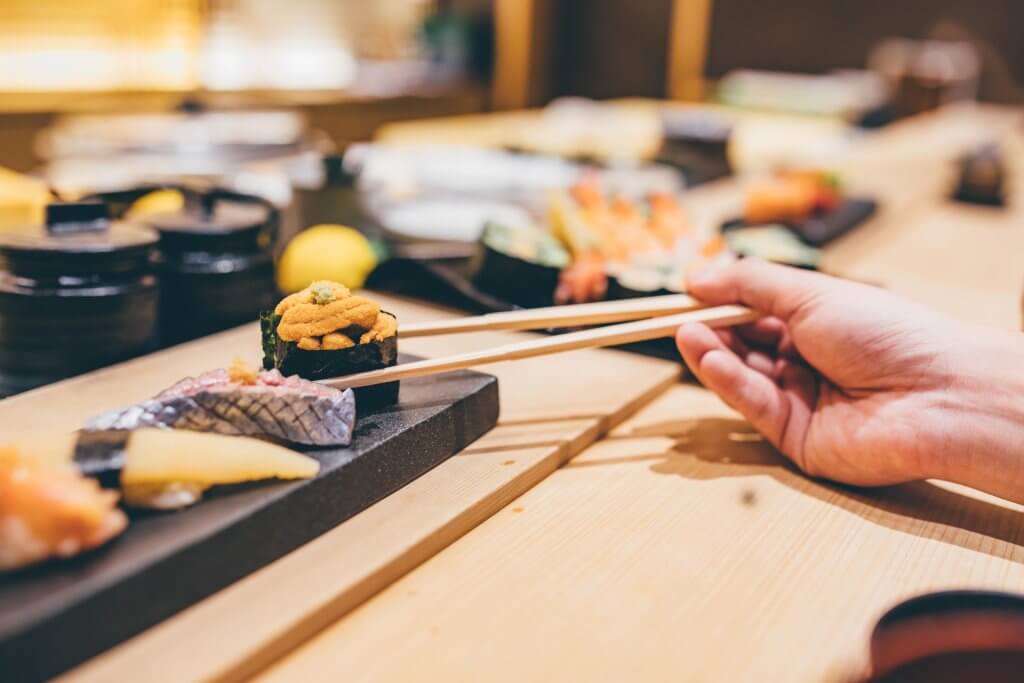 4. Flavor it with soy sauce

If the sushi chef has not already brushed shoyu (soy sauce) on your sushi, you can pick up a small amount of shoga (pickled ginger), soak it in soy sauce, and then brush it across the top of the sushi topping. It is very difficult, and therefore not reccoemnded, to pick up sushi to dip into soy sauce. However, if you do want to dip your sushi into soy sauce, be sure to turn it on its side and dip the fish – not the rice – gently into the sauce, before putting the entire piece into your mouth. 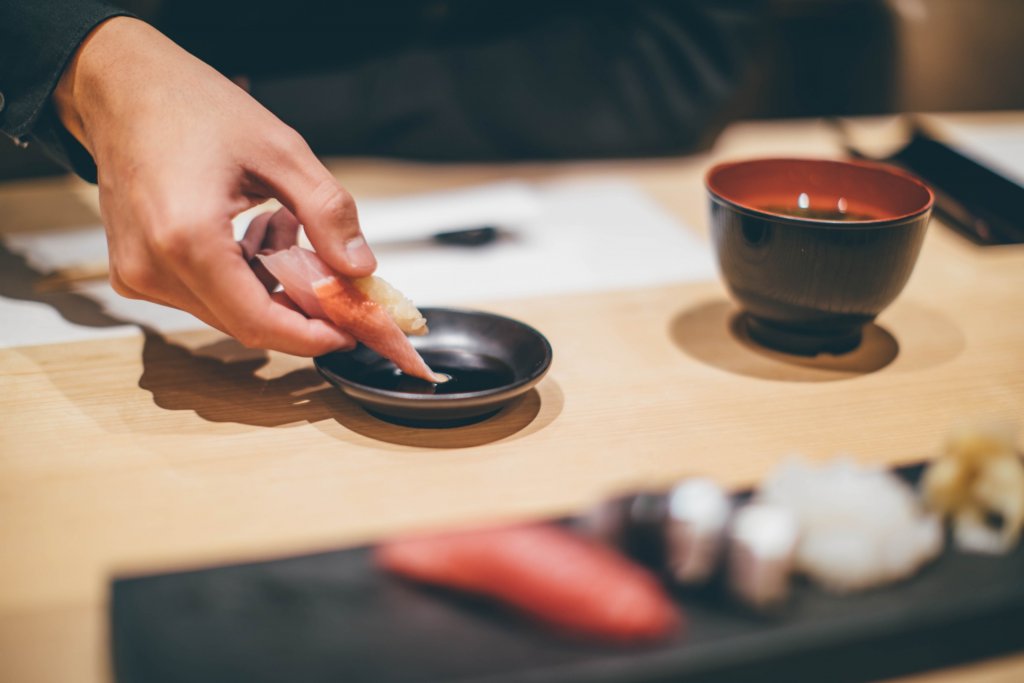 Sushi, at its best and most fresh, has a variety of very strong and distinct flavors. Shoga (pickled ginger) is served alongside sushi to cleanse your palate between each piece of sushi. Eat a pinch to remove the aftertaste of fat, but be careful, as too much of it will burn your mouth! 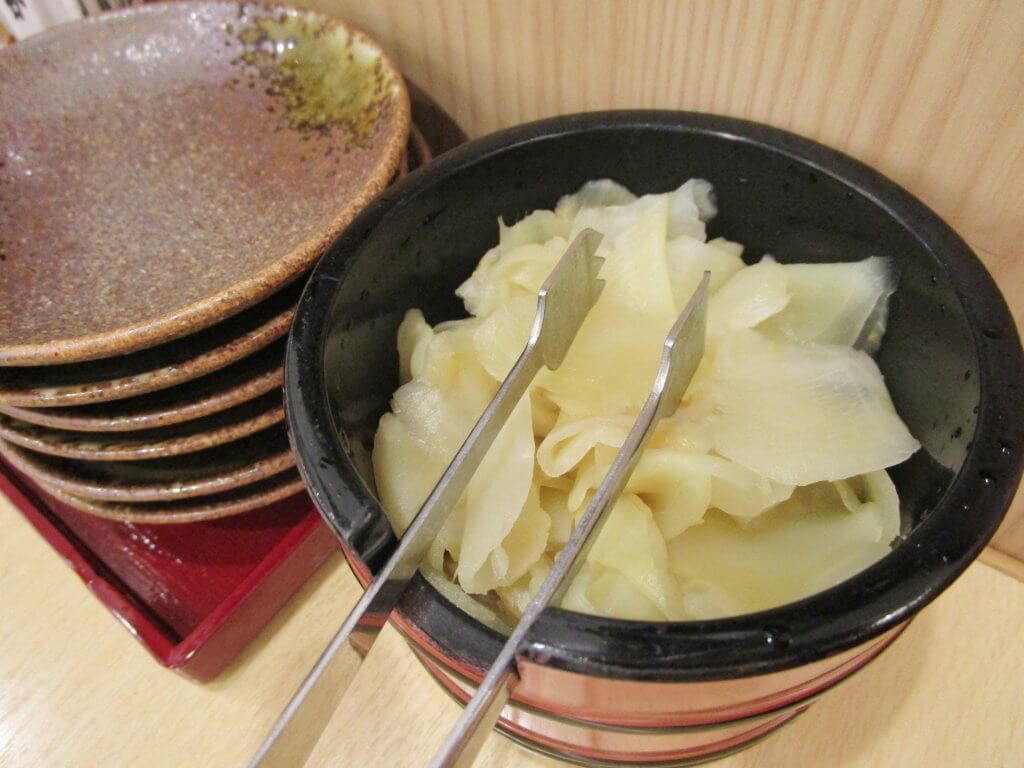 To cleanse your palate of any aftertastes, many sushi chefs believe that drinking tea is ideal. Water, of course, is also acceptable for people who dislike tea, or prefer to drink something cold.

Know the Do’s and Don’ts of Eating Sushi

Don’t bite the sushi into two. A piece of sushi is roughly 6 centimeters long, and is made to fit perfectly into your mouth. All of the flavors and textures should be enjoyed in a single bite.

Don’t let sushi sit. There is nothing more delicious than sushi that has just been placed on your plate. Its flavors are at their peak potential when the sushi has just been prepared. So, be sure to enjoy it immediately after it is placed in front of you!