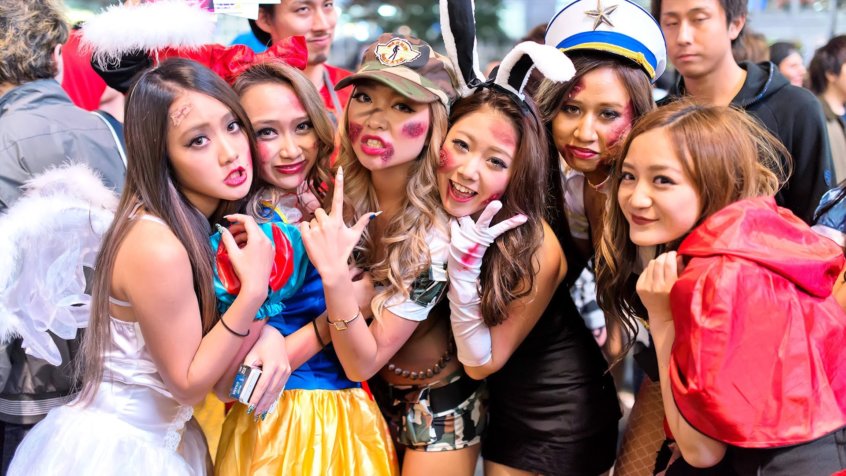 Japan is well-known for its love of crazy costumes and candies, so it seems only natural that Halloween would be widely celebrated throughout the country. However, Halloween has only recently become a popular holiday in Japan, and the way the Japanese celebrate it might be different than in your own home country. Here’s what Halloween looks like in Japan! 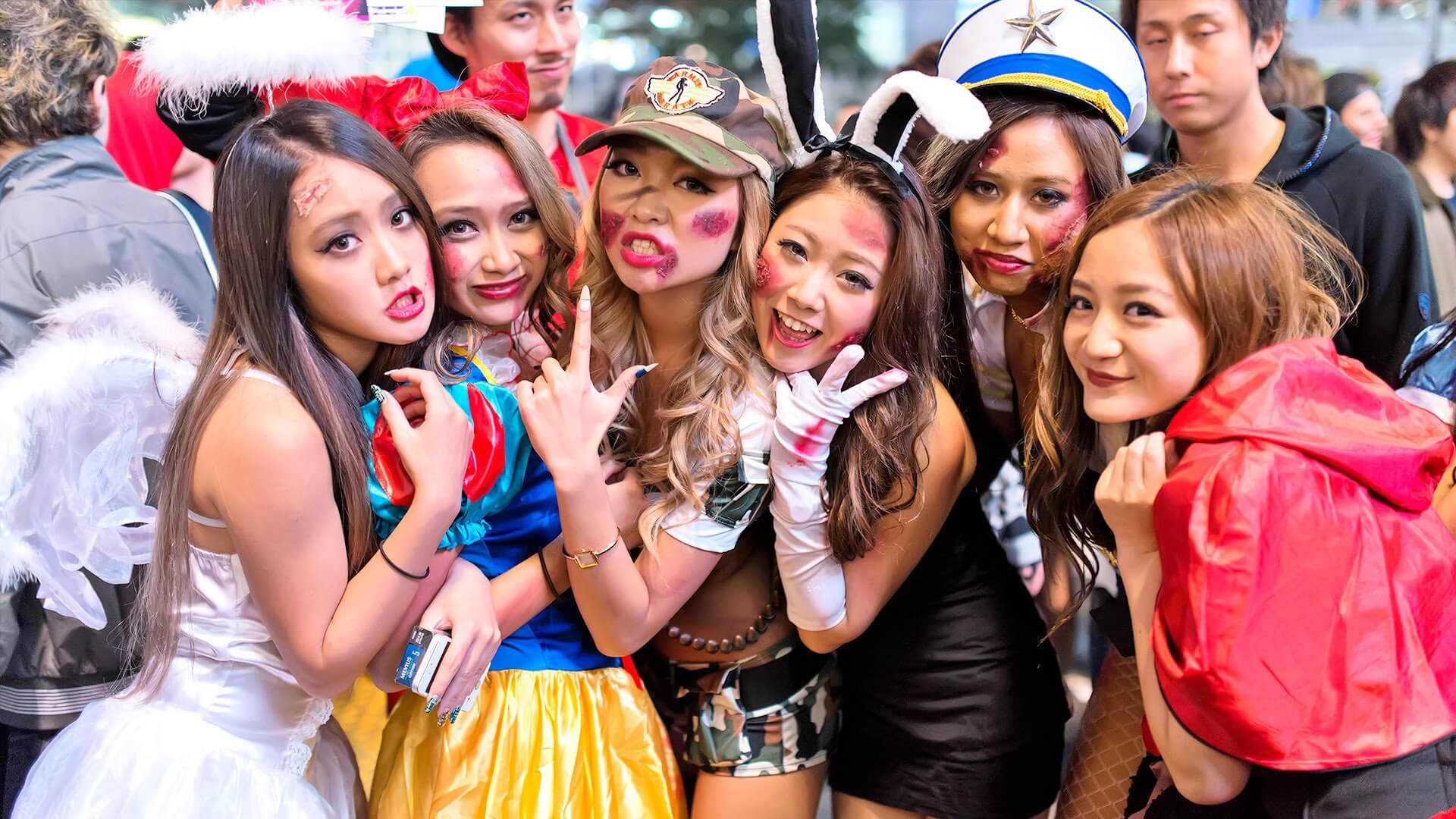 The celebration of Halloween throughout Japan is actually an incredibly recent development. Japan participates in a number of commercial holidays, such as Christmas and Valentine’s Day, but for a long time, Halloween wasn’t one of them. Within the past decade, Japan as a whole has shown a gradual increase of interest in Halloween, and with that has come an increase in commercial hype as well.

According to Tokyo locals, the history of Halloween in Japan can be traced back to the 1970’s, when a bookstore in the pop-culture hub of Harajuku began selling Halloween paraphernalia. Foreign customers visited the store and inquired about the Halloween merchandize, so the store owners took a trip to America to learn more about Halloween. It was after their return that they began throwing costume parades, and annual Halloween themed events began to slowly grow in popularity in the bars and clubs in Tokyo. Even then, for awhile, Halloween was a mostly quiet affair unless you went to a bar or club—and even if you did, it was mostly the ones frequented by foreigners that had Halloween-themed parties.

However, Halloween then gained national recognition in 2000 when Tokyo Disneyland hosted its first Halloween event. This was followed quickly by similar celebrations at Sanrio Puroland and Universal Studios Japan in Osaka. In the most recent years, Halloween decorations, makeup, visuals and costumes that used to only be available during Halloween events at Tokyo Disneyland have become much more common. “Halloween Season” begins in Japan on September 1st, when all of the stores whip out black and orange decorations, goods, and Halloween-themed menu items pop up through early November. Currently, the bigger cities like Tokyo and Osaka are the most popular destinations for costumed fun, but more and more cities across the country are embracing the holiday each year. 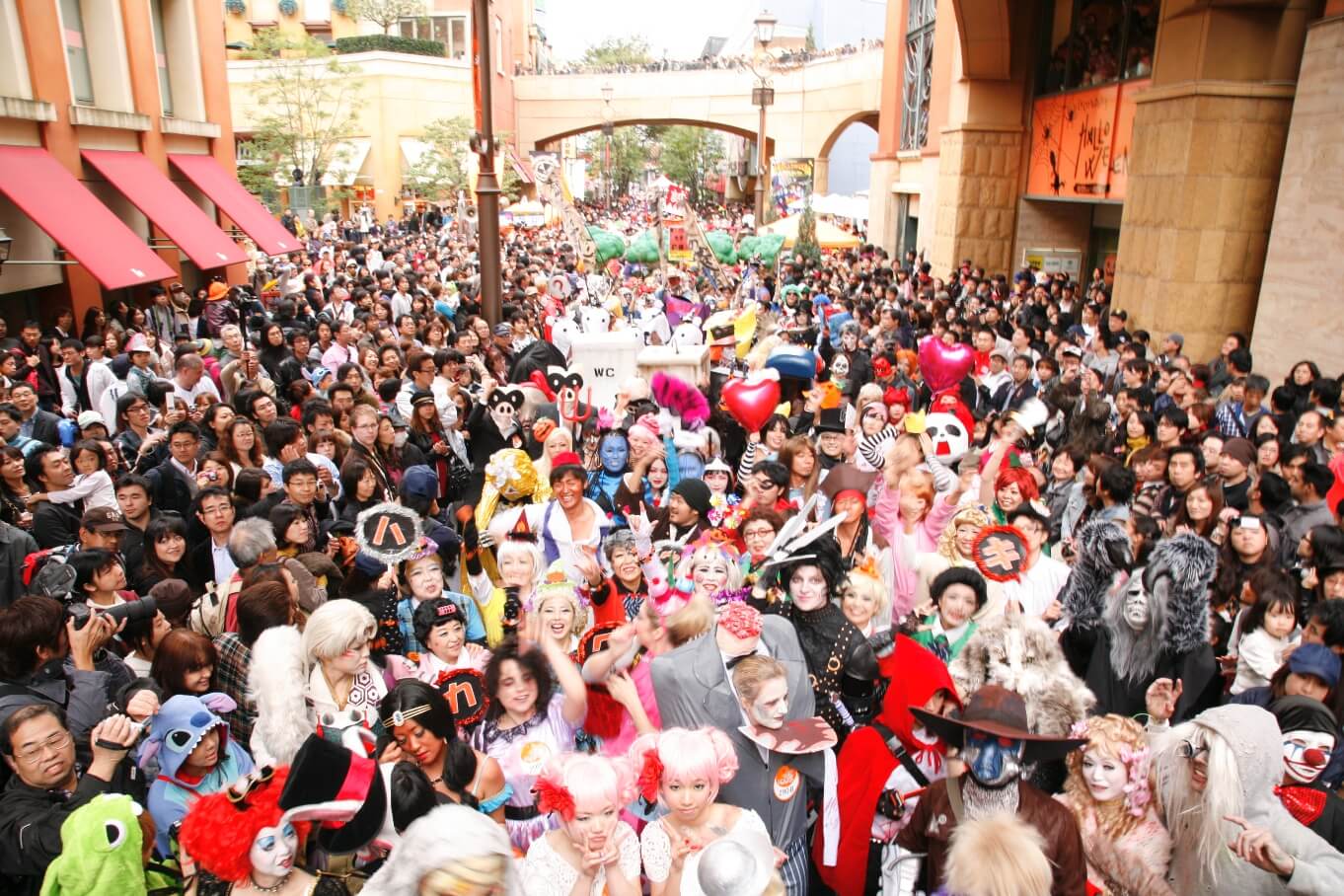 When you think of Halloween, it’s very likely that you think of Trick-or-Treating, the well-known Halloween tradition in which children dressed in costumes go door-to-door and receive candy. However, the practice of children Trick-or-Treating for candy is non-existent in Japan. Although many aspects of Halloween were copied and celebrated in Japan, this one was just too different for most Japanese people to embrace, and that fact is probably not going to change any time soon.

The concept of Trick-or-Treating clashes with a number of Japanese beliefs and cultural values. Inviting someone to your home is a pretty significant honor, so having large groups of rowdy children pay casual visits to so many houses likely does not sit well with Japanese culture. The act of gift-giving is also incredibly important in Japanese culture, so determining what candy or snacks to offer, then presenting them to all children in an equal and respectful manner, is something that does not come easily for Western-style Trick-or-Treating. And finally, Japanese children and teens are very involved in their studies, club activities, and other extracurriculars, so having to go around to people’s houses to gather candy on potentially a school night would be a big inconvenience to many people.

A number of Japanese people also oppose Japan following the traditions of Halloween to begin with, so the establishment of a Treat-or-Treat system would most likely be met with a large amount of opposition. That being said, there are a variety of ways in which Japanese people participate in Halloween festivities! Trick-or-Treating is just not one of them. You’ll just have to go buy your own Halloween candy! (; 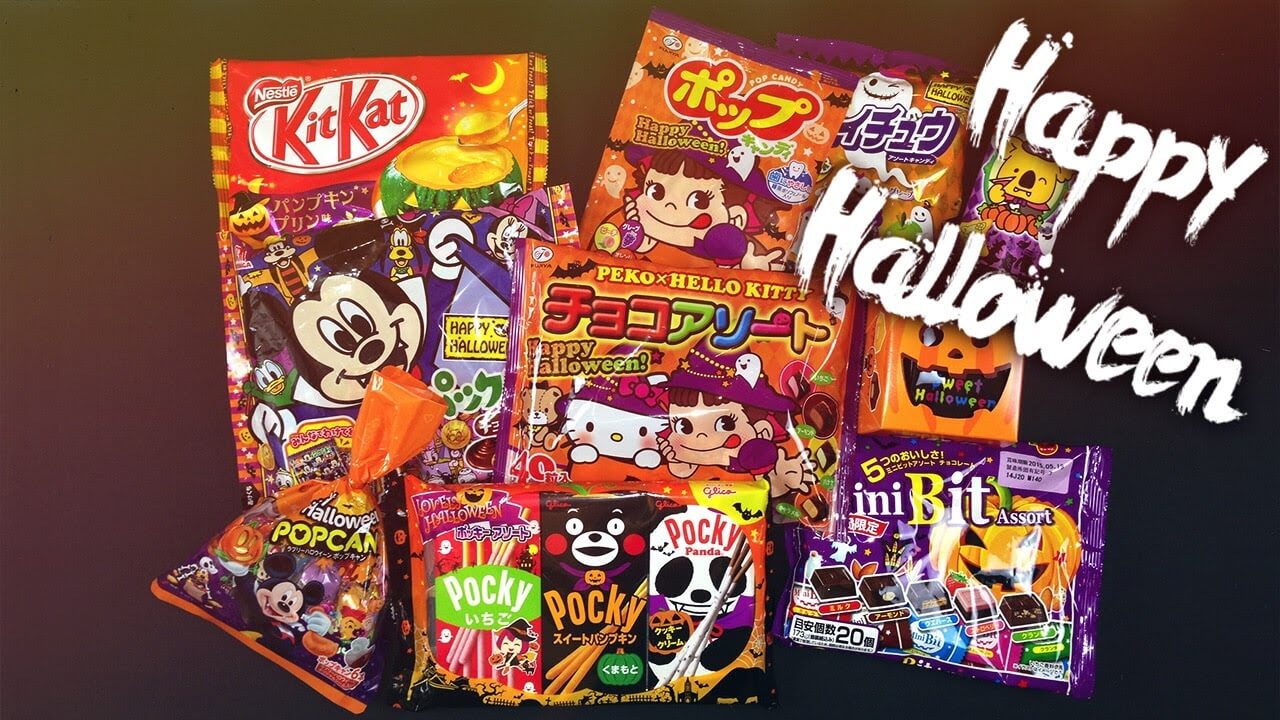 The appeal of Halloween in Japan revolves around two things: commercialism and costumes. In the recent years, the costumes have become especially synonymous to Halloween in Japan. Many fanatics of “cosplay” (costume play) find the idea of dressing up very appealing, and this is an especially popular mindset among those in Harajuku, Akihabara and the otaku (anime and manga lovers) crowd in general. Halloween, especially in Shibuya, seems to be a place where adults enjoy a big costume party rather than a trick-or-treat for children.

And, as far as being a holiday of horror –  sure, you’ll see people dressed up as zombies and other scary creatures, but apart from Universal Studios Japan‘s Halloween Horror Nights, you won’t see many haunted houses or scream park attractions. Halloween is more about dressing up and less about experiencing spooks and thrills, so Halloween ends up being mostly for adults who want to dress-up. Costume parties become a focus for many restaurants, bars, or clubs, so most weekends in October, you can usually find some sort of Halloween-themed costume party, especially in the larger cities like Tokyo or Osaka. 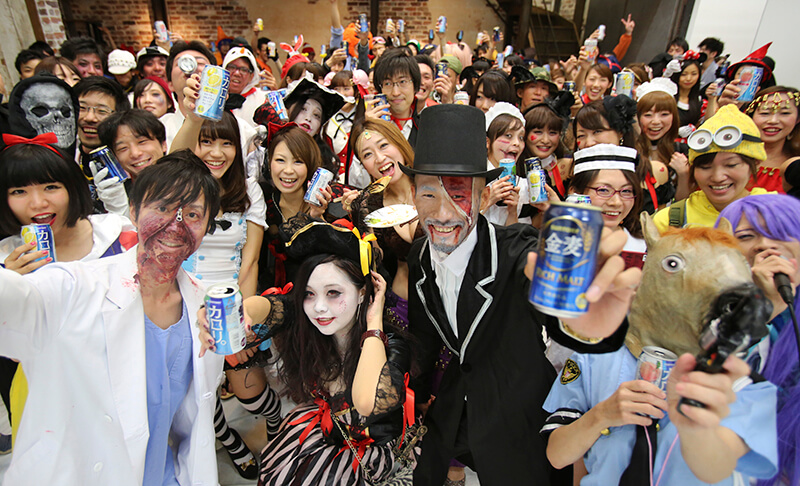 While costumes and parties are still abundant on October 31, the hype of the holiday occurs in the weeks building up to Halloween, and all of the costume parties, themed decorations, and special limited-edition menu items that come with it. Halloween decorations and goodies can be found in some shops and department stores as early as September, and there are now several celebrations around the bigger cities well before October 31st.

Desserts and sugary confections are popular year-round in Japan, and Japanese candy companies spare no expense capitalizing on a new limited-time theme to market to consumers. Orange, black, purple, and green desserts are a big hit at restaurants and bakeries around the country during the Halloween season. Many Japanese stores get into the spirit by selling colorful decorations and desserts. 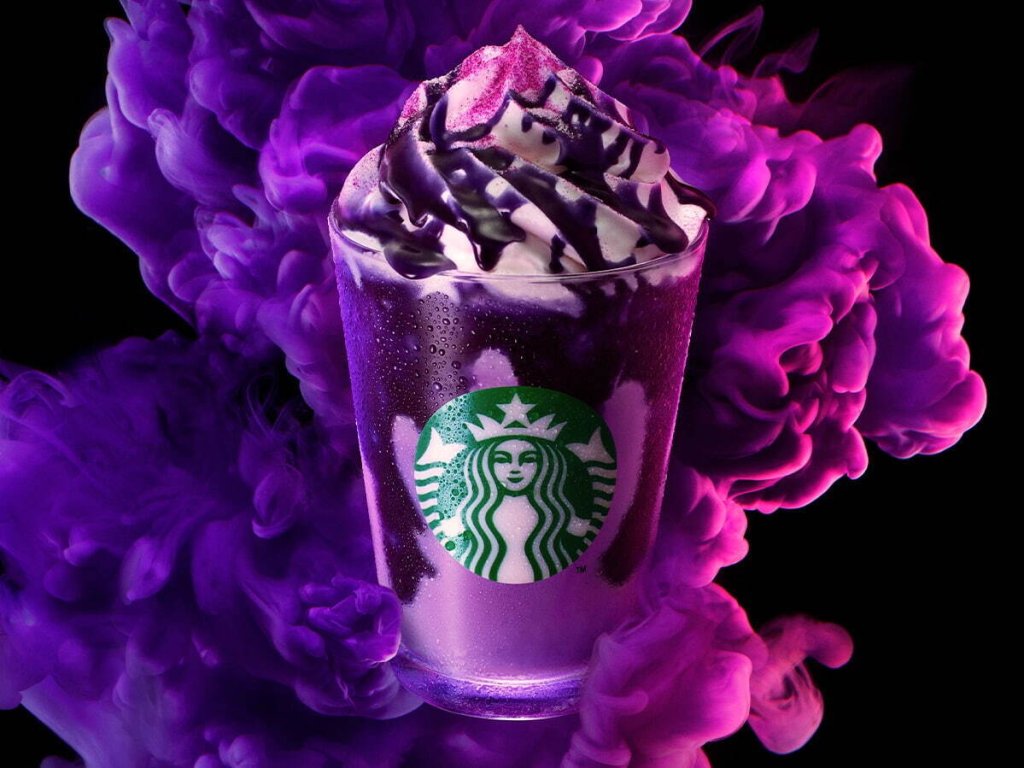 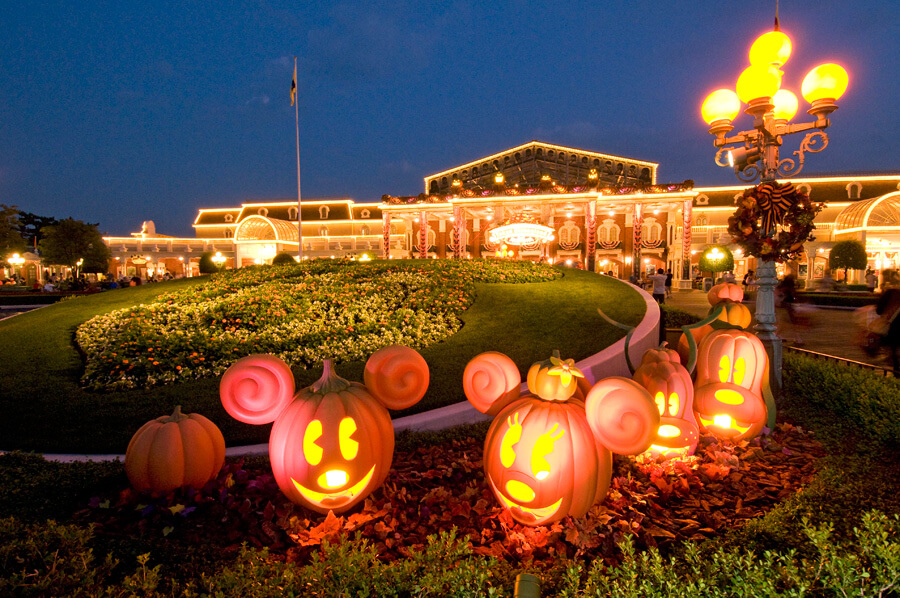 From the time when Halloween was first introduced in Japan, Tokyo has been the primary focus and leading location for the holiday. This continues to be the case, even now. While Halloween festivities in Tokyo used to be confined to bars and clubs, in recent years, Halloween revelers in Tokyo have taken to the streets. The massive festivities, however, have resulted in some trouble and conflict between partiers and the city locals.

Some Japanese see Halloween only as an opportunity for foreigners to dress in silly costumes and turn public trains into big drinking parties, which is very disruptive to people commuting. A few years ago, signs were famously posted in Tokyo trains that specifically asked for people in costume to refrain from “having Halloween train parties” on the train.

The street celebration in Shibuya is the biggest Halloween event in Japan, attracting an astounding 1 million people. The famous crossing becomes so packed that people can barely move. And, every year, as Shibuya Halloween is getting bigger and bigger, the atmosphere is becoming outrageously crazy and chaotic. And, following a night-long street party of so many people, there’s bound to be some serious clean-up. According to the Shibuya Mayor, about 7.8 tons of garbage was collected in 2017. That included broken glass, bottles, cans and costume parts that were strewn about the streets. And, the toilets in the area’s shopping district that were used to change into outfits ended up being covered in makeup, fake blood and other Halloween materials.

Learning a lesson from the draught rollover accident caused by a drunken cosplayer four years ago, Shibuya Ward enacted an ordinance banning “street drinking” during Halloween and the New Year’s Eve countdown this year, 2022. 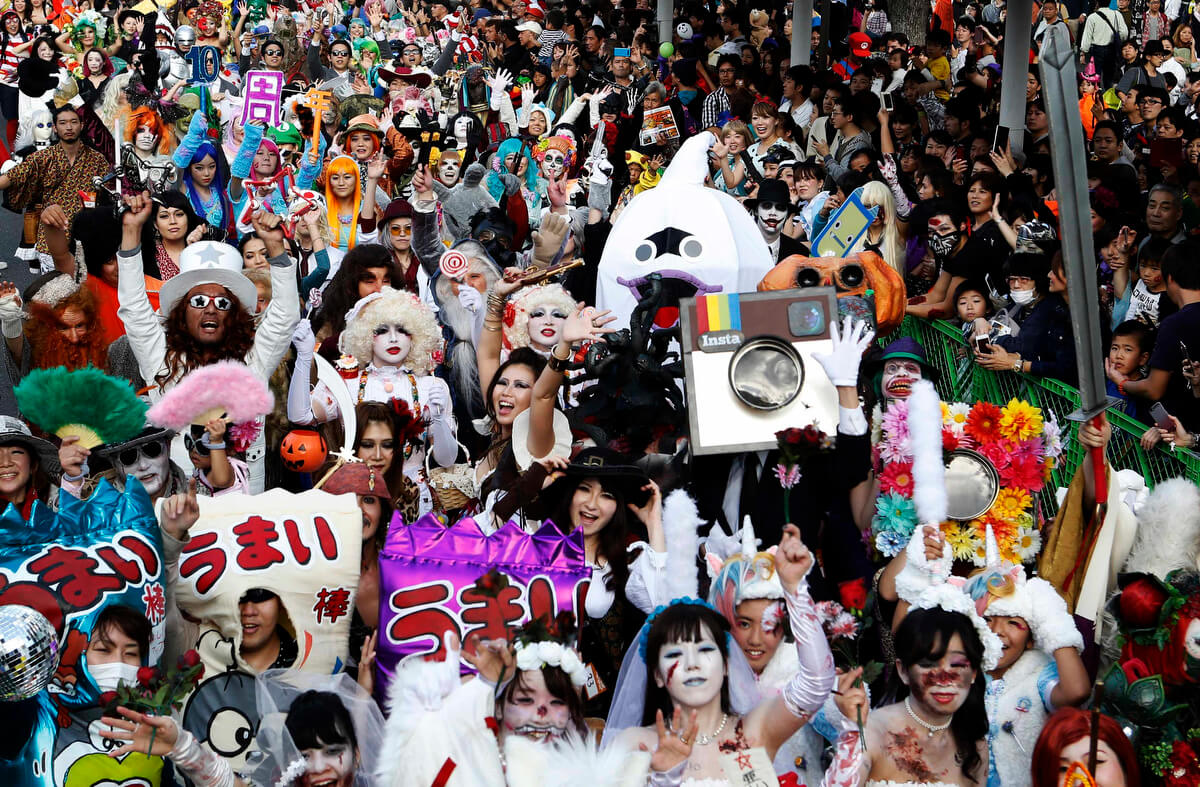 Although Halloween in Shibuya has been modest for the past two years due to Corona, this year, 2022, is expected to be crowded with many people, including foreign tourists.