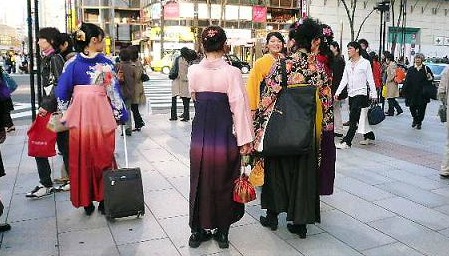 Have you ever seen this kind of scenery?

Around mid March in Japan, you might see this gorgeous looking girls on the street in Japan.
They wear Hakama, one of the types of Kimono. As you see from the photo, the top is Kimono and wearing long skirts or culotte, this is Hakama.

So who are they? Why are they waring Hakama?

They are to attend graduation ceremony at college or University.
Mid March is a graduation season in Japan. Usually there is no uniform in college/University, they can choose what to wear on this big day, and Hakama is very popular amongst girls.

I can see waring Hakama is more popular than waring traditional Kimono on graduation day. It’s been popular for long time, over 90 years.
Since beginning of Showa era (Now is Heisei era, 29th, and Showa era lasted 64 years), thanks to popular comic and Takarazuka musical’s influence, it is said girls start wearing Hakama on graduation day. Actually Hakama used to be a school uniform in many schools in old time.

When Japanese women start waring Hakama, and what is the reason behind?

Japanese  women started wearing Hakama in Meiji era, which is about 150 years ago.
Western culture flew in to Japan and women start to walk outside actively. Comparing traditional Kimono, Hakama is easy to walk.
During Meiji and Taisho era (1946-1926), female school teachers started to wear Hakama, and since then it became female students’ uniform as well till beginning of Showa era.

Coordinating Hakama with lace-up boots and western hair style with big ribbon, which is a mixture of Japanese and wester culture became super popular amongst girls during Meiji era.
Even nowadays we think it looks cute and many people want to do the same. So graduation day is the ideal day for it.

What about guys? What do men wear on graduation day?

Who cares? but many of them wear suits. Yes, there are Hakama for men and I personally like it because it looks quite cool 🙂
And of course not all of female students wear Hakama or traditional Kimono on the graduation day. They wear suits too.

Ad: Would you like to make your original Hanko (name stamp) in Japanese?
https://japanese-name-stamp.com