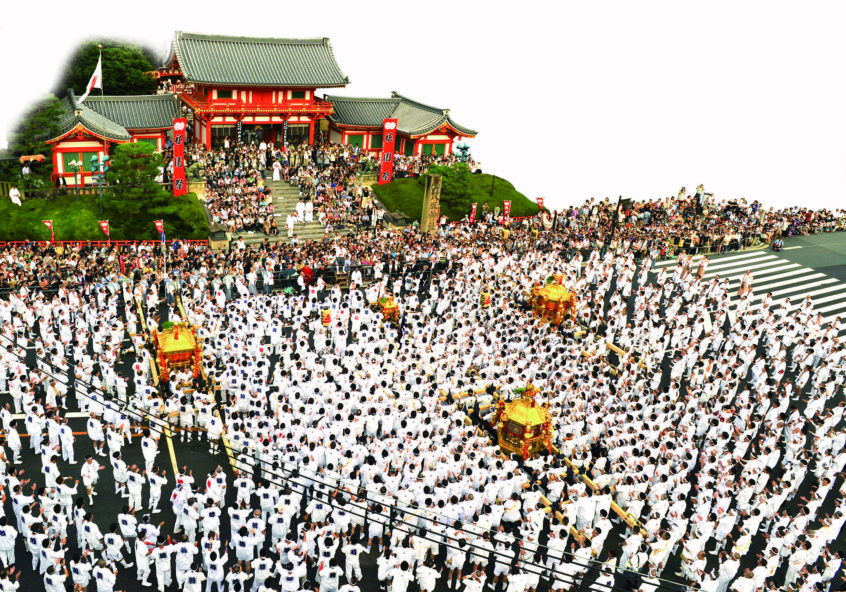 The Gion Festival (Gion Matsuri 祇園祭) is held every year for an entire month in Kyoto in July, and is one of the most famous festivals in all of Japan. Here is everything you need to know about this timeless, lively celebration!

Gion Matsuri is the biggest festival in Kyoto, and also one of the largest festivals in all of Japan. The festival was originally held to protect people from plague, but has grown into a grand celebration of all of Kyoto City. Today, Gion Matsuri is more of a month-long summer festival in which locals and visitors all gather to enjoy the festive atmosphere. That being said, Gion Matsuri continues to uphold rituals and traditions established when it first began almost 2000 years ago. 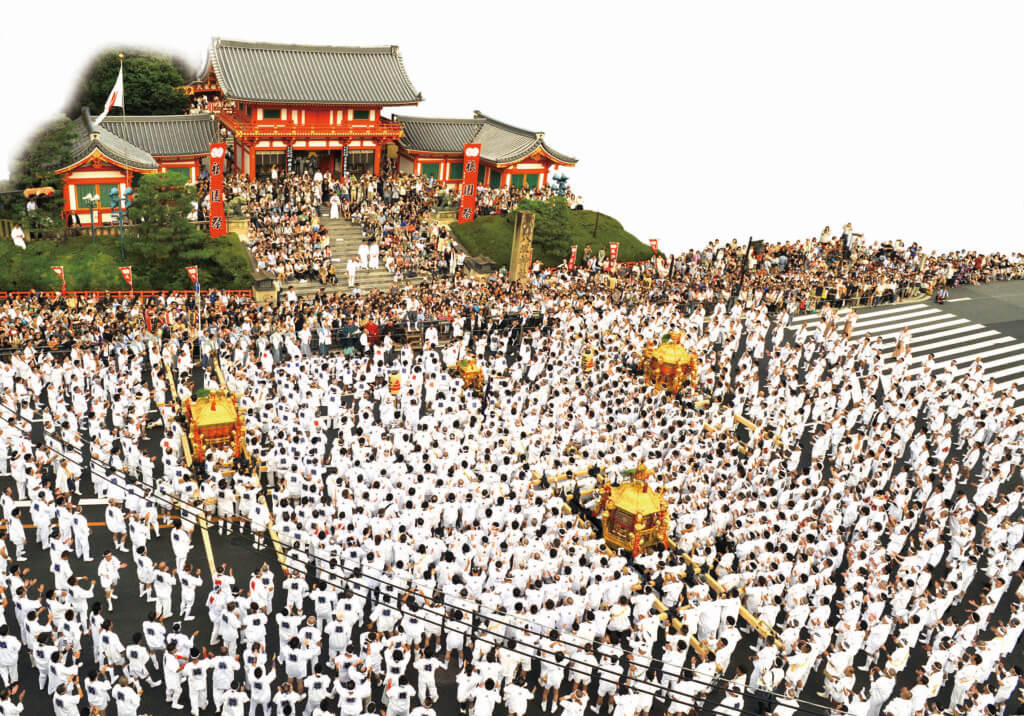 Gion Matsuri first originated in 869 as a part of a purification ritual called goryo-e to appease the deities thought to cause fire, floods, earthquakes, and other disasters. At the time, the people were suffering from a plague which they attributed to the rampaging diety Gozu Tennō (牛頭天王). Japan’s ruler at the time, Emperor Seiwa, ordered prayers to be made to the god of the Yasaka Shrine, Susanoo-no-Mikoto. 66 massive “halberd” floats, one for each of the traditional provinces of Japan, were prepared and placed at the garden of Shinsen-en, along with portable shrines called mikoshi (神輿) from the Yasaka Shrine.

Additionally, a local boy was chosen to be a “sacred messenger” to the gods. The boy was seated on one of the floats, and he was not allowed to touch the ground from the 13th to the ending of the first parade on the 17th. This tradition was repeated over centuries during times of epidemic, and is still upheld to this day as a part of the annual Gion Matsuri . 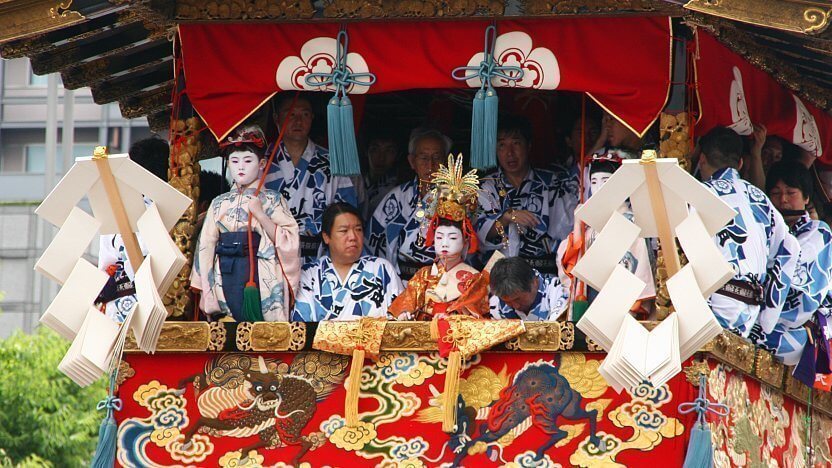 As decades passed, some smaller floats were lost or damaged, but have since been restored. When the floats are not in use, the floats are kept in special storehouses throughout the central merchant district of Kyoto.

The festival has become an important part of the identity of Kyoto, as well as the festival culture of all of Japan. It serves as an important setting in Yasunari Kawabata’s 1962 Nobel Prize-winning novel, The Old Capital in which he describes the festival, along with the Festival of Ages (Jidai Matsuri) and Aoi Matsuri, as “the ‘three great festivals’ of the old capital”. 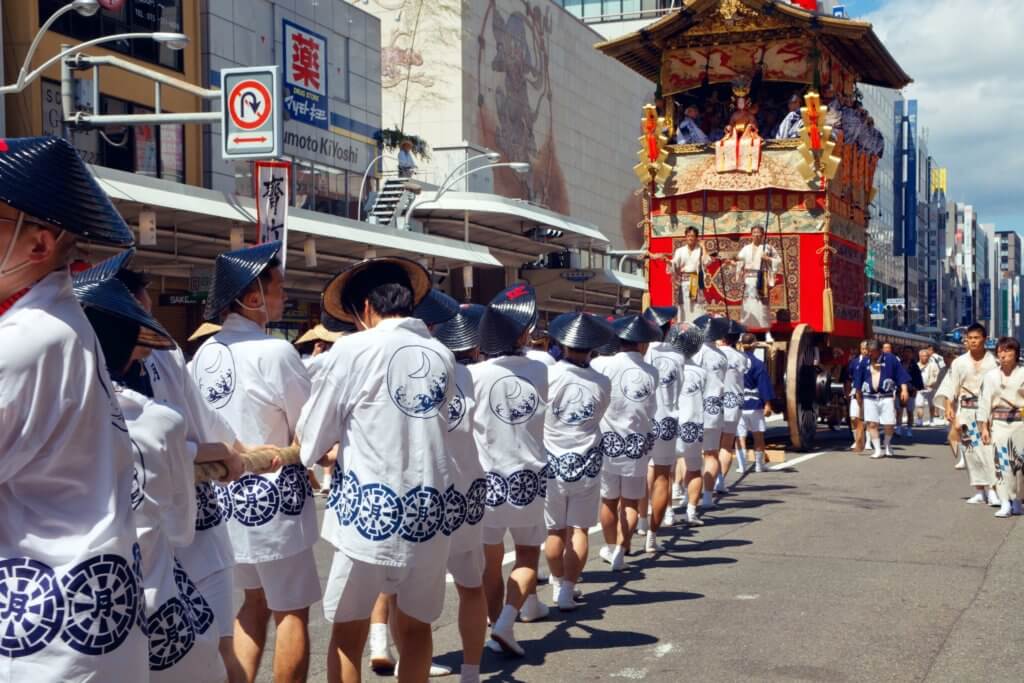 Gion Matsuri can be separated into two parts. The first part is “Saki-Matsuri”. It starts at 9:00am on 17 July, when 23 huge yama and hoko are carried around the Shijo-Karasama intersection along Shijō-dōri, then down Kawaramachi-dōri, and finally onto Oike-dōri. The official “finish line” is at the Oike-Karasuma intersection. The procession last just over 2 hours and ends around 11:30am. Viewers can watch the procession at any point along the route, but the most interesting places to watch are near the intersections, where the men in the procession have to work extra hard to lug the floats around the corners. 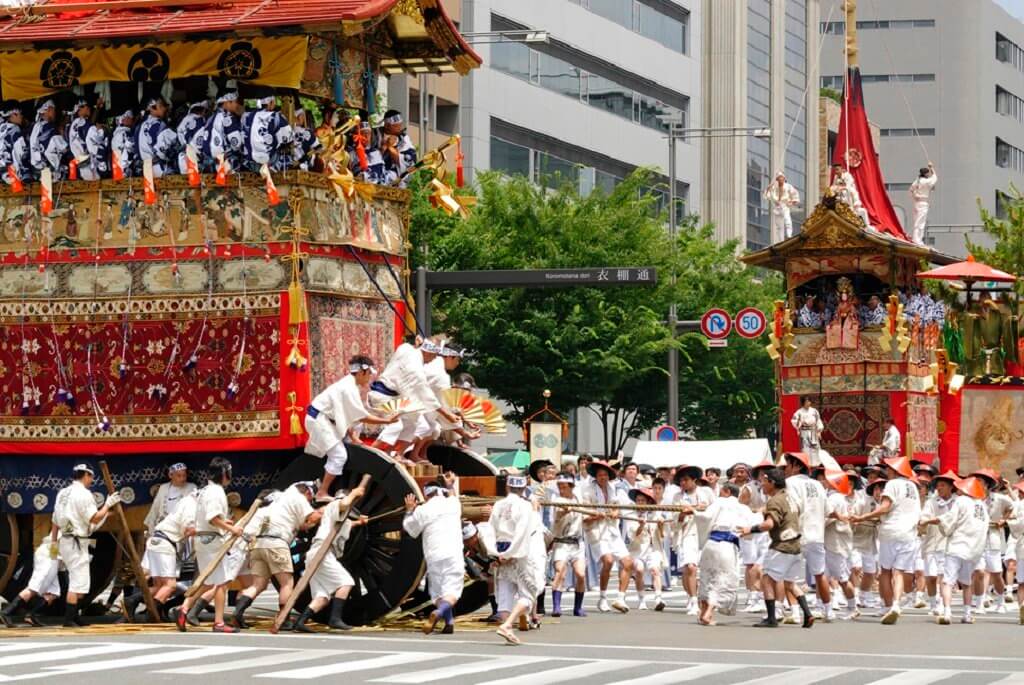 In 2014, for the first time in almost 50 years, a second float procession was held during the festival period. This second procession is known as the “Ato Matsuri”. Compared to the one on the 17th, it is a smaller procession, as only 10 of the yamaboko are pulled through the streets of Kyoto. And, this time, the yamaboko are pulled along a route that is the reverse of the main procession’s route. The procession on this day starts at 9:30am and ends around 11:30am. Typically, less people attend this procession, which makes it slightly easier to get a good viewing spot, because there are less crowds.

For those visiting Gion Matsuri, the most lively part of the festival is during the “Yoi-yama” events held on the three evenings preceding the main procession days (July 14-16; 21-23). On these evenings, all of the city seems to be having a party, as both locals and tourists eat and drink from the evening and well into the night. There are also hundreds of pop-up yatai selling Japanese street food and other forms of traditional festival games. Many people come dressed in festive summer yukata robes, and it is a great time! 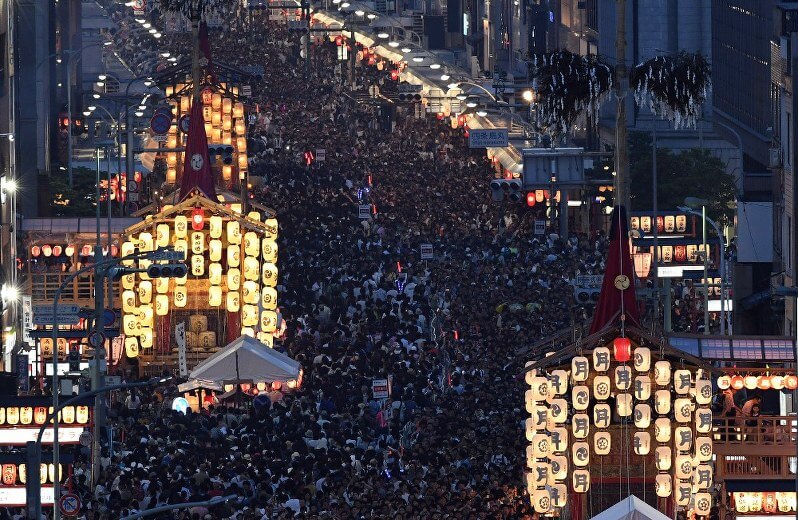 The Byobu Matsuri (Folding Screen Festival) also takes place during the Yoi-yama days of Gion Matsuri. On these days, high-class families around the Shinmachi and Muromachi areas display their private possessions and treasured family heirlooms in front of their houses. Some families even open their homes to visitors for viewing the homes or art collections.

Following is a list of selected annual events in the Gion Festival.

We went to last year’s Gion Matsuri in Kyoto and witnessed the mikoshi float procession in person! Watch the video below: