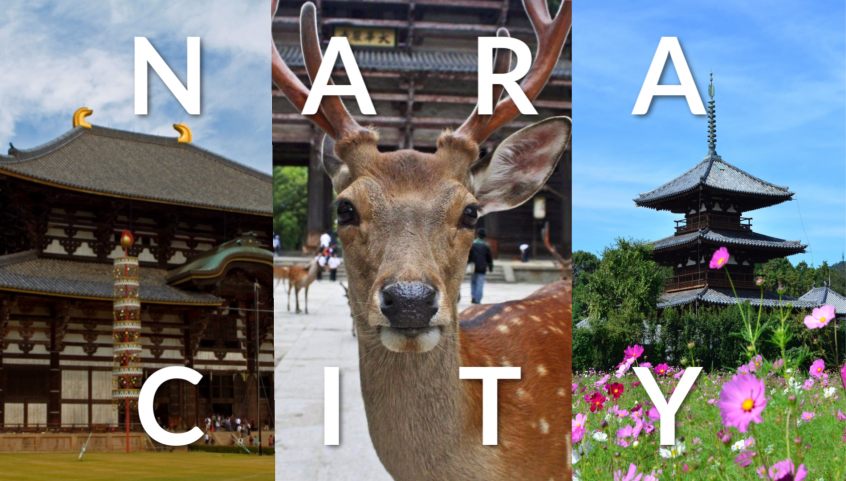 Nara (奈良) is a city with a significant historical importance to Japan, and continues to serve as one of the most beloved tourist spots today. We take a look at how to get there, what to do, and even what it eat in this city spotlight on Nara City!

Nara City at a Glance 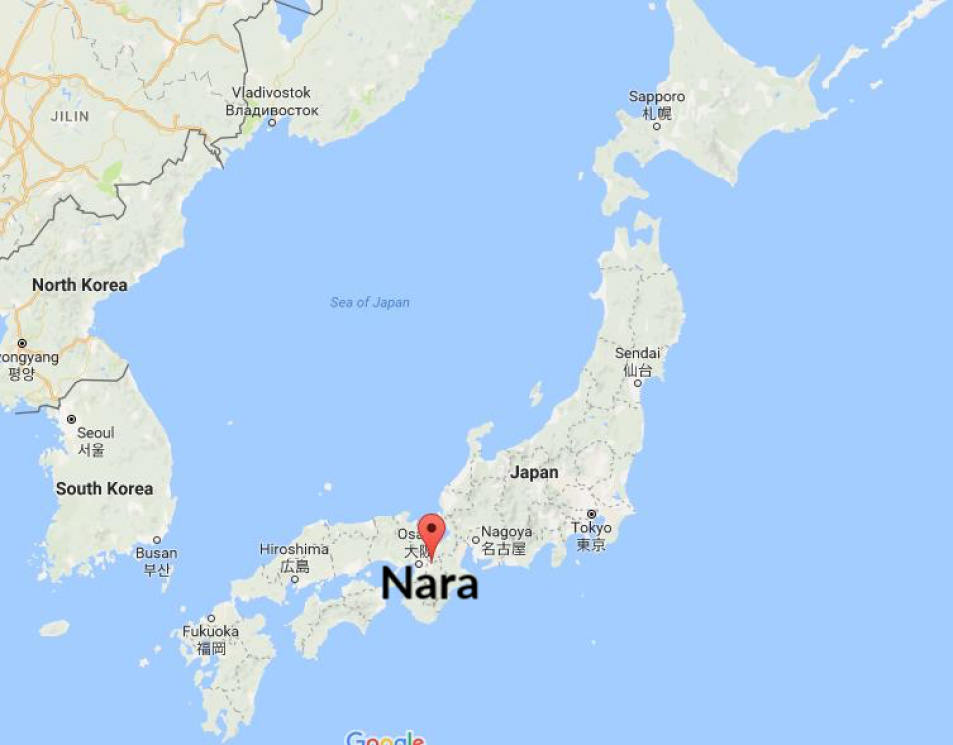 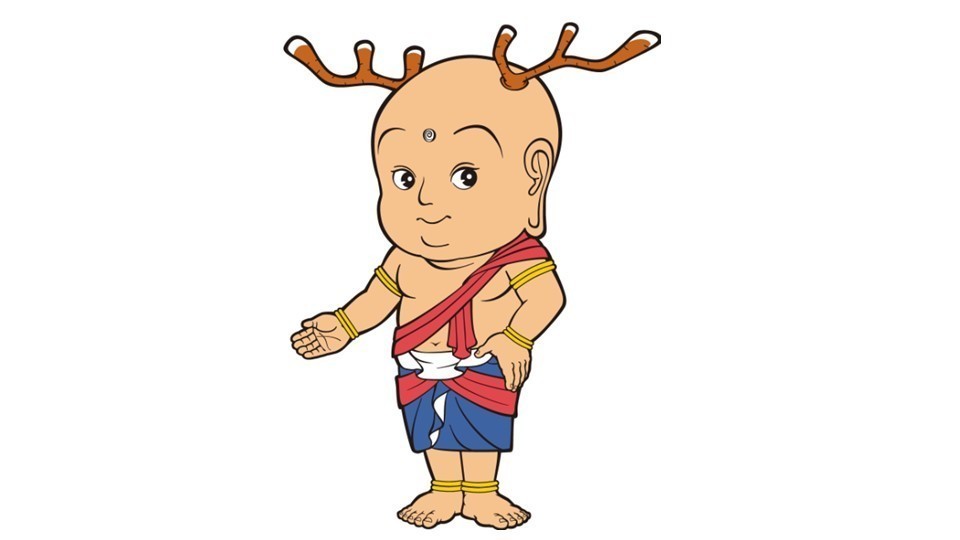 From Kansai Airport, Nara City can be reached via Japan Rail or Kintetsu Railways. Depending on the train, this trip takes anywhere between 30-50 minutes. There is also an airport limousine bus that departs hourly and goes to and from KIX airport in just 90 minutes.

As a side trip, Nara is conveniently located less than one hour from Kyoto and Osaka. From Kyoto, two railways – JR and Kintetsu – connect to Nara, with the trip taking about 35-45 minutes. From Osaka, you can take either JR or Kintetsu, and arrive in Nara in just over 30 minutes.

Once in Nara City, you can travel around via either Kintetsu Railways or JR West. The main Kintetsu station is an underground station near Nara Park, and the main JR station is a 15-20 minute walk west of the park. 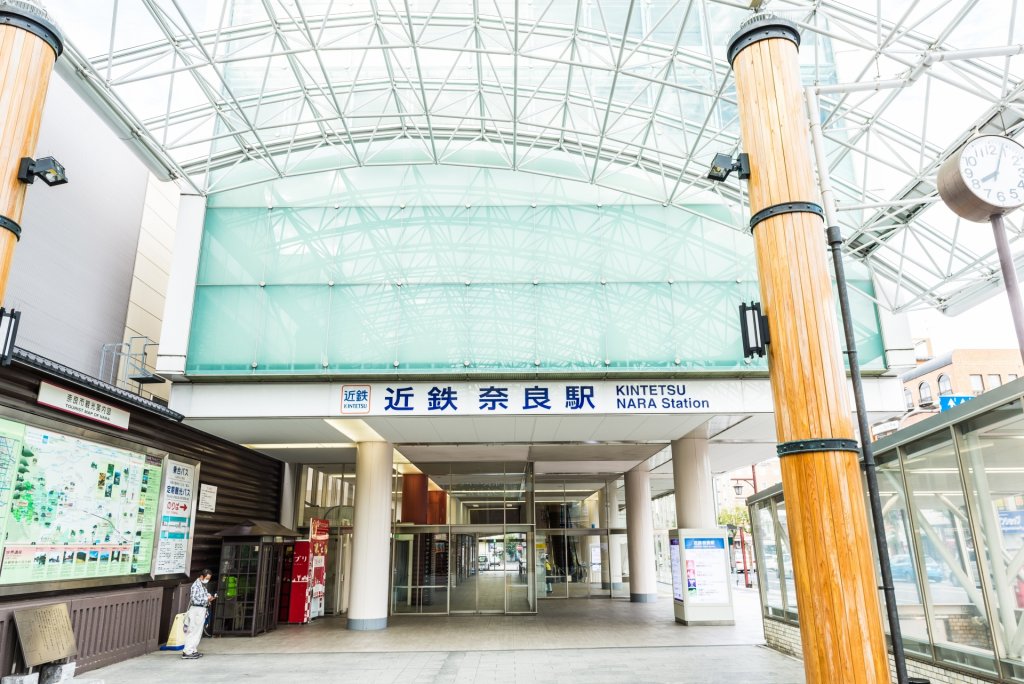 There are also city buses that go from the two main stations to the majority of the main tourist spots. All major IC cards are accepted on the trains and buses around Nara, including Suica and ICOCA. However, many of Nara’s main attractions are found in and around Nara Park, and can therefore be reached on foot.

For more information on traveling around Nara City, including bike rental and sightseeing buses, refer to the official Nara City Travelers Guide website. 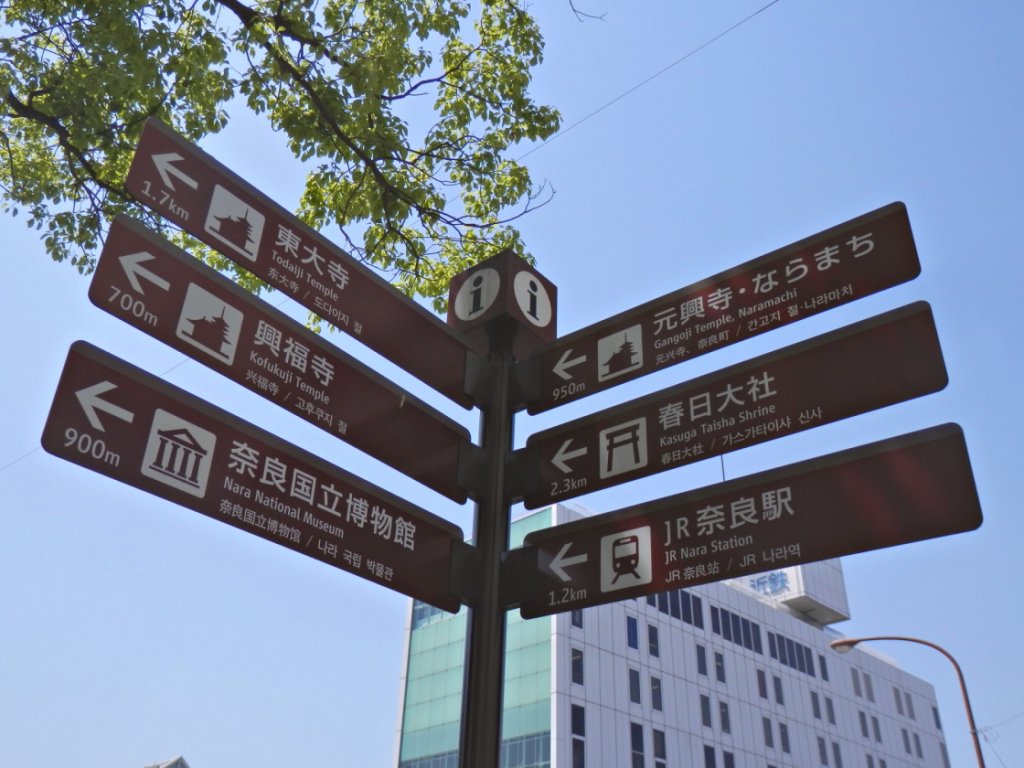 In ancient times, Shinto rites of purity decreed that, with the death of an emperor, the capital must be relocated.

On March 11, 708 AD, Empress Genmei ordered the court to relocate to the new capital, Nara. Just 2 years later, the city was established as Japan’s first “permanent capital” in 710 CE. It was the seat of Japanese government until 784 CE, when the Imperial family moved to Nagaoka, then Kyoto, and eventually settling in what is now modern-day Tokyo.

Although relatively short, the time that Nara City served as the capital of Japan served as a very important time in the legal and administrative development of Japan. These decades were known as the Nara period, which lasted from 710–794 C.E. With the establishment of Nara as the capital, Asuka-dera, the temple of the influential Soga clan, was relocated within Nara. Furthermore, Emperor Shōmu ordered the construction of Tōdaiji Temple and the world’s largest bronze Buddha statue.

Even after the capital was moved away from Nara, the temples of Nara, known collectively as the Nanto Shichi Daiji, still remained significant, thus giving Nara the nickname of “Nanto” (南都), which means“The Southern Capital“. Today, hundreds of these temples, gardens, and shrines, and a handful of UNESCO World Heritage Sites still remain in Nara City. 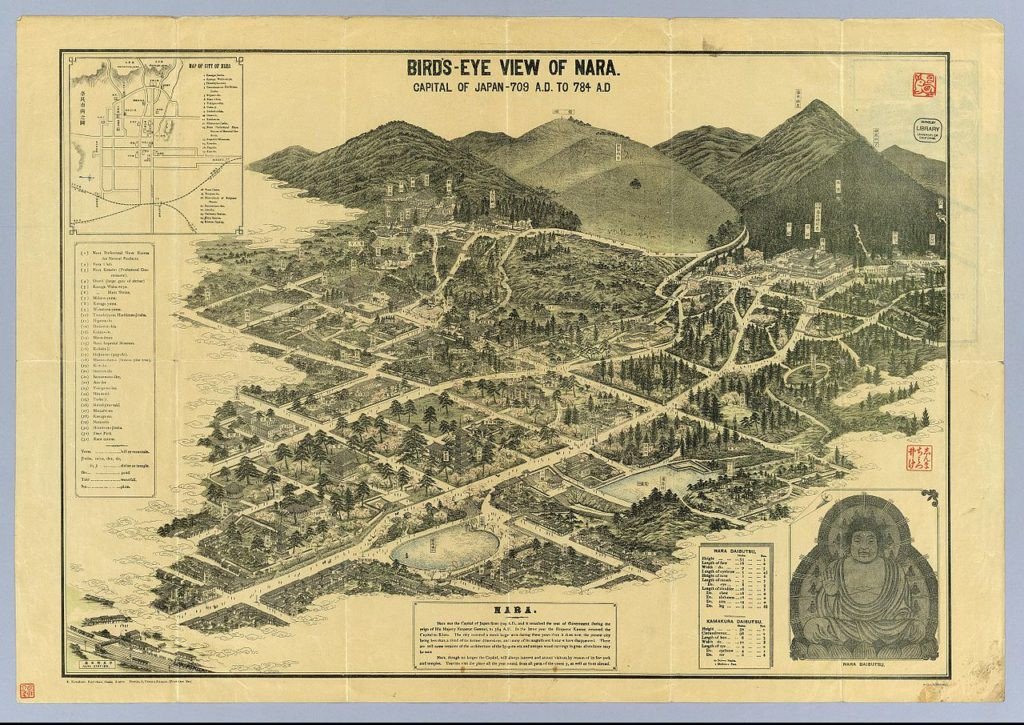 Tōdaiji Temple (東大寺) is Nara’s most popular tourist attraction as well as a World Heritage Site. Tōdaiji means “Great Eastern Temple”, and the temple itself is quite large and impressive in person. The temple was built in 752 and served as the head temple of all provincial Buddhist temples of Japan until the capital was moved in 784.

Tōdaiji is also home to the largest Buddha statue in Japan – a bronze sculpture with a height of 15 meters (49.2 ft). Outside of the temple, the grounds are also quite large, and include the large Nandaimon Gate, a lot of Nara Park, a museum, and a number of smaller temples and halls. Many of these places have free admission, while an adult ticket to Tōdaiji is 600yen. 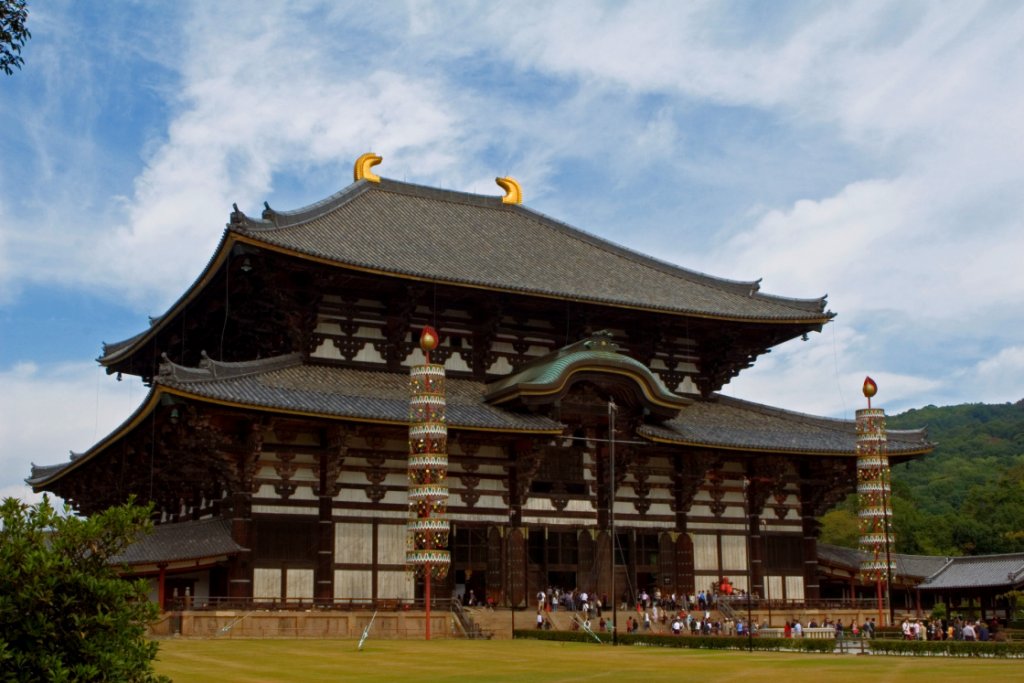 Nara Park (奈良公園) is massively famous worldwide for being home to hundreds of deer. Deer, called shika (鹿) in Japanese, were sacred messengers of the gods in Nara, and are therefore allowed to roam freely. The deer of Nara Park are quite accustomed to tourists, and are therefore very tame. Visitors to the park can purchase senbei crackers to feed the deer for just a few hundred yen.

Aside from the deer, the park also contains many famous tourist attractions, including Tōdaiji temple, Kasuga shrine, Kofukuji temple, and the Nara National Museum. 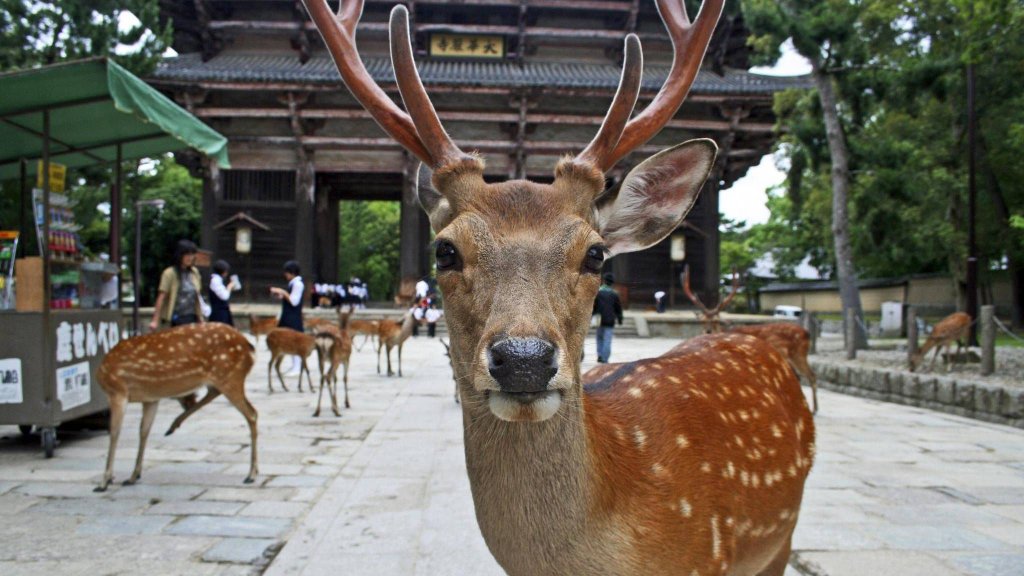 Photo: The Globe and Mail

Isuien Garden (依水園) is a Japanese garden, with a name meaning “garden founded on water”. The garden’s name comes from the fact that its ponds get their water from the adjacent Yoshikigawa River. In addition to an abundance of lush greenery and plants, Isuien also uses the nearby Tōdaiji Temple’s Nandaimon Gate and Mount Wakakusayama as “borrowed scenery”.

Isuien is divided into a front garden and a rear garden. The front garden dates back to the mid 17th century, and the rear garden was built in 1899 by a wealthy merchant. The entire garden is home to a number of teahouses, as well as a small museum displaying pottery, seals, mirrors and other ancient Chinese and Korean artifacts. Admission to the museum is included in the ticket to the garden, which is 900 yen.

*Closed Tuesdays (or the following day if Tuesday is a national holiday) except in April, May, October and November; New Year holidays

Hōryūji Temple (法隆寺) is a large compound of temple structures and a museum. The temple contains some of the most important Buddhist images in the entire country, as well as some of the oldest wooden buildings in the world. It was founded in 607 by Prince Shotoku, in compliance with his father’s dying wish. Hōryūji was also the first designated UNESCO World Heritage site in Japan.

It is also incredibly popular in the early fall, when the flowers in the surrounding fields bloom and complement the temple structures. Admission to the temple is 1000 yen, the fields around the temple grounds can be accessed for free. 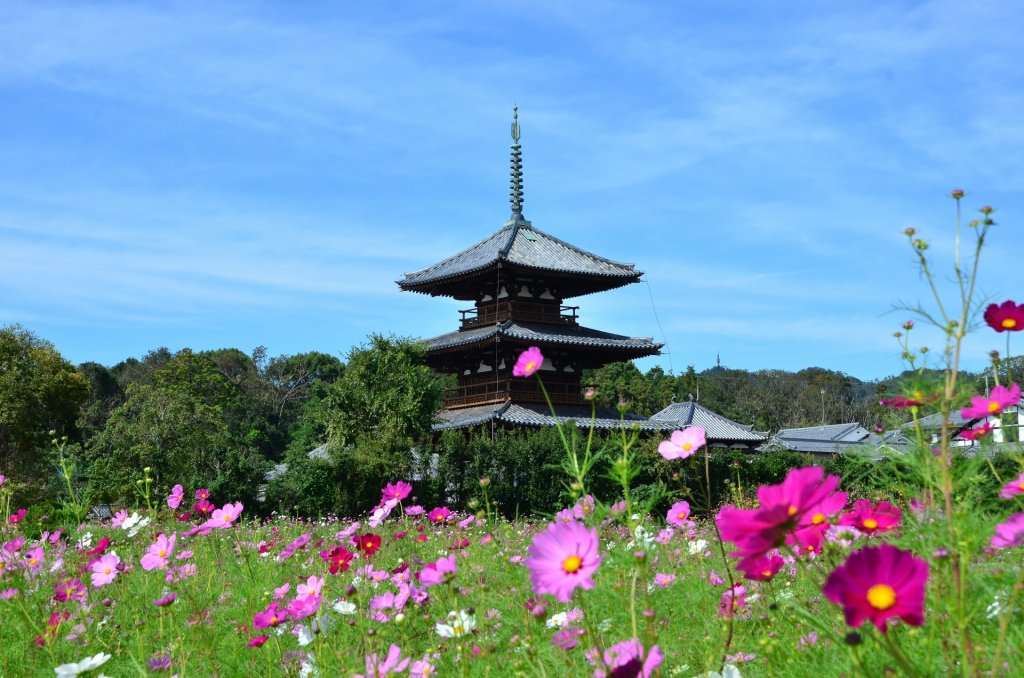 From the very basic Japanese to JLPT N5 including above mentioned Casual Japanese, you can access to all 13 online courses with affordable monthly subscription.
Join my Premium Online Japanese Course now! For more information about the membership site, click here.