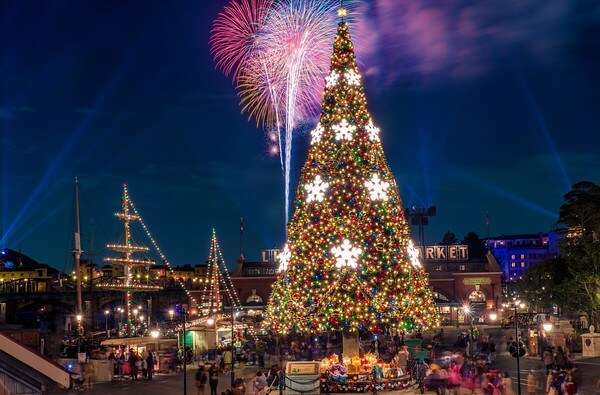 The Christmas season in Japan is a magical time of the year. True, Christmas Day is not recognized as a national holiday, as only about 1 percent of the whole population in Japan is Christian. However, many of the things traditionally related to Christmas, such as decorations in shopping malls, colorful LED lights, and festive Christmas markets can be found all across Japan this time of year. Japan has also developed a few of its own unique Christmas traditions that are entirely Japanese. Here is everything you need to know about Christmas in Japan! 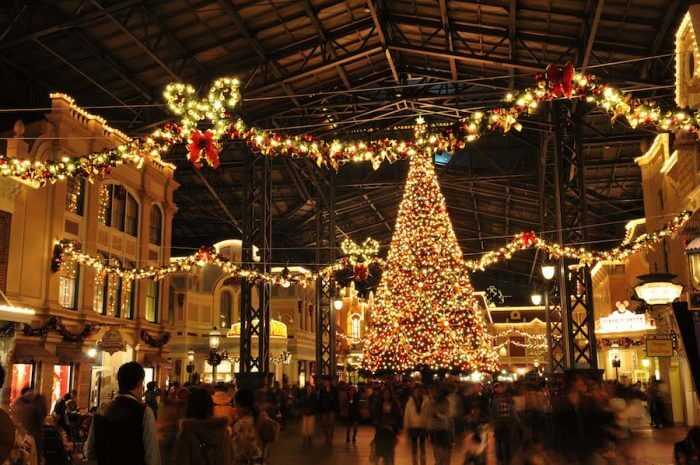 Origins of Christmas in Japan

The earliest record of Christmas in Japan can be traced back to 1549, when St. Francis Xavier came to Kagoshima as Japan’s first Christian missionary. However, in 1587, the shogun Tokugawa Ieyasu banned the Christian religion, which in turn put an abrupt end to the existence of Christmas in Japan. Fast forward over 200 years, when Japan re-opened its doors to the world during the Meiji Restoration in 1868. The Japanese government began to allow religious freedom, which meant that customs like Christmas could be practiced again. Other than during the World War II period, in which Western culture and celebrations pretty much vanished, the Christmas season has continued to grow exponentially in Japan. For the last few decades, Christmas has been widely celebrated in Japan as a fun, romantic, commercial holiday. 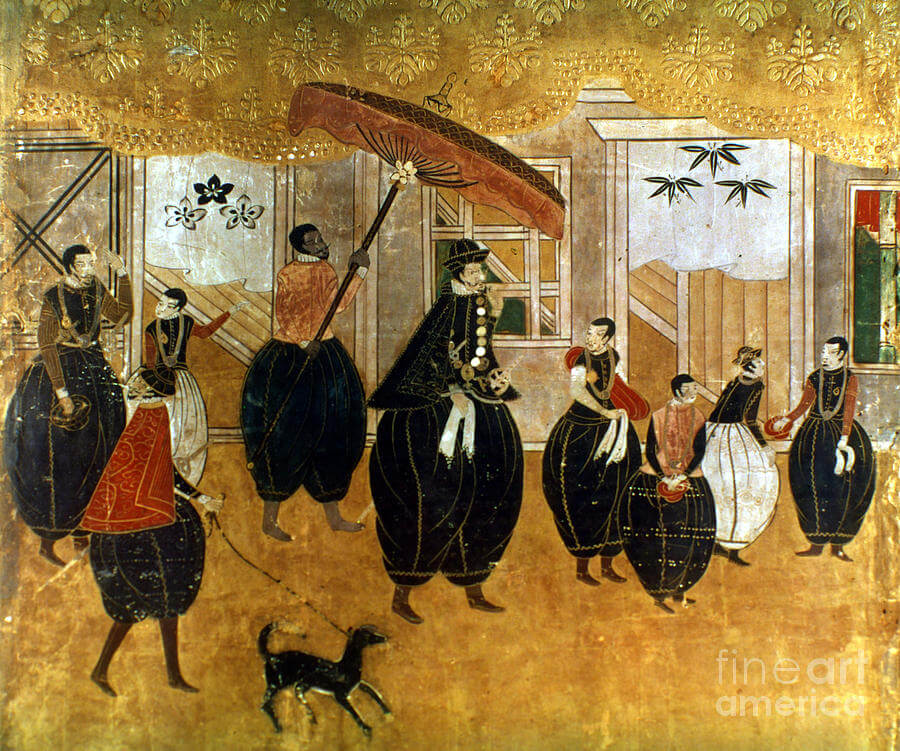 An illustration of St. Francis Xavier arriving in Japan.

Although the holiday season has become much more popular across the country in recent years, Christmas is not a national holiday in Japan. Japan’s national holidays in December include the Emperor’s birthday on the 23rd, as well as a New Year break from December 31 to January 3. Therefore, most businesses treat the 25th as a normal working day, so for many Japanese people, Christmas is just another workday.

That being said, the Christmas “spirit” is still felt throughout the country.  These days, several customs that came to Japan from the West, such as sending and receiving Christmas Cards and giving presents, are increasingly popular. Starting in early November and lasting through the holiday season, stores everywhere are filled with Christmas decorations and goods, restaurants and cafes fill with Christmas music, and European-style Christmas markets pop up all across Japan.

Japanese people have even adapted the phrase “Merry Christmas!” into Japanese. It is typically written in katakana as メリークリスマス, and pronounced Merii Kurisumasu. 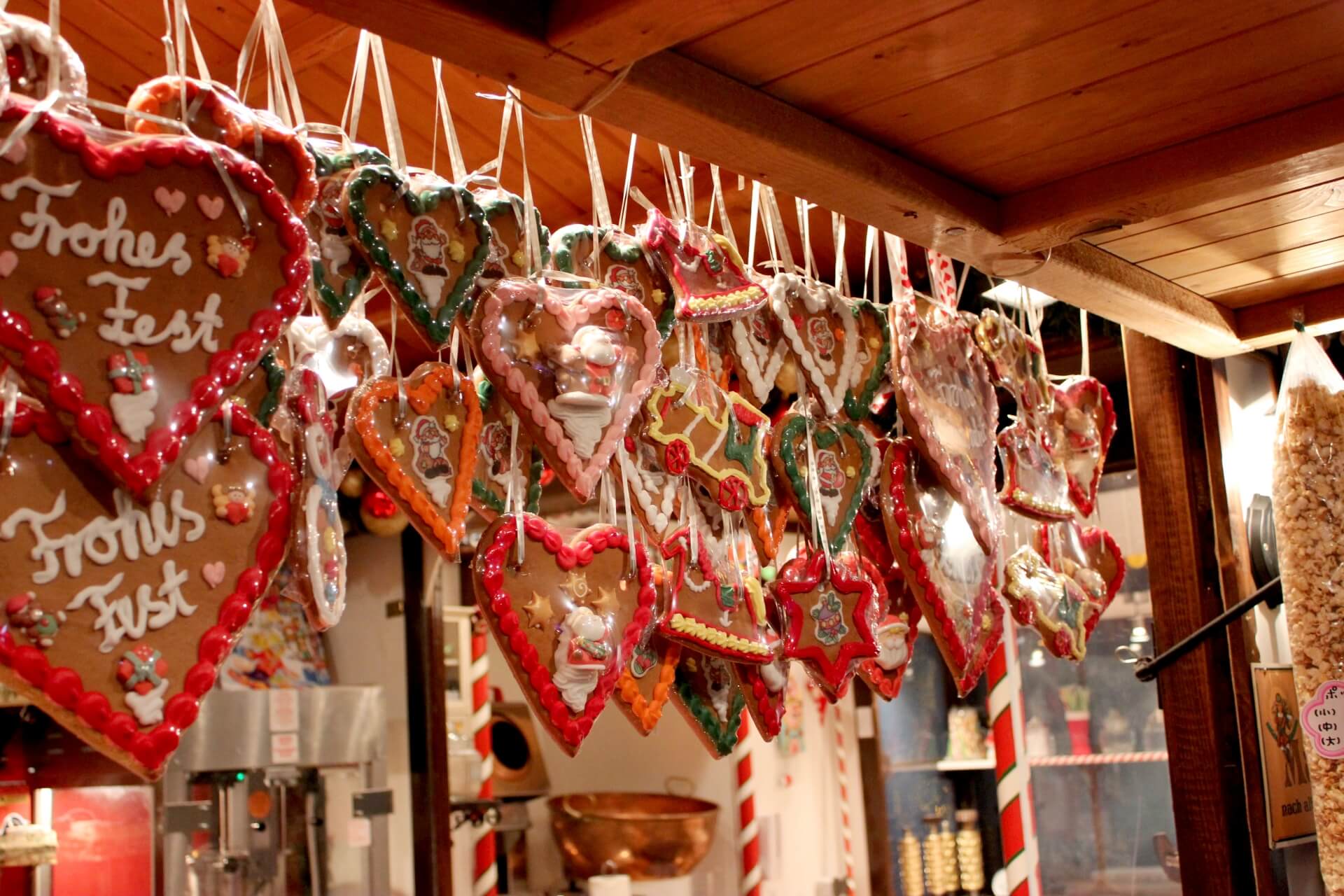 Christmas sweets for sale at the German Christmas Market in Osaka.

During this time of year, traditional Christmas trees, ornaments, and holiday goods can be found at most major malls and department stores, especially in the big cities like Tokyo and Osaka. Colorful LED illuminations and light-ups are also one of Japan’s favorite ways to celebrate the winter season, and they complement the Christmas atmosphere perfectly.

Just like in most other Western countries, Santa Claus also plays a significant role in Japan’s Christmas celebration. In Japan, Santa is known as Santa-san (サンタさん). However, in Western tradition, Santa enters homes by climbing down the chimney, but virtually no house in Japan has a chimney. Therefore, Japanese children are told that Santa is a kind of like a ghost that magically appears with presents! Many children also attend Christmas parties, where Santa Claus himself often makes an appearance. 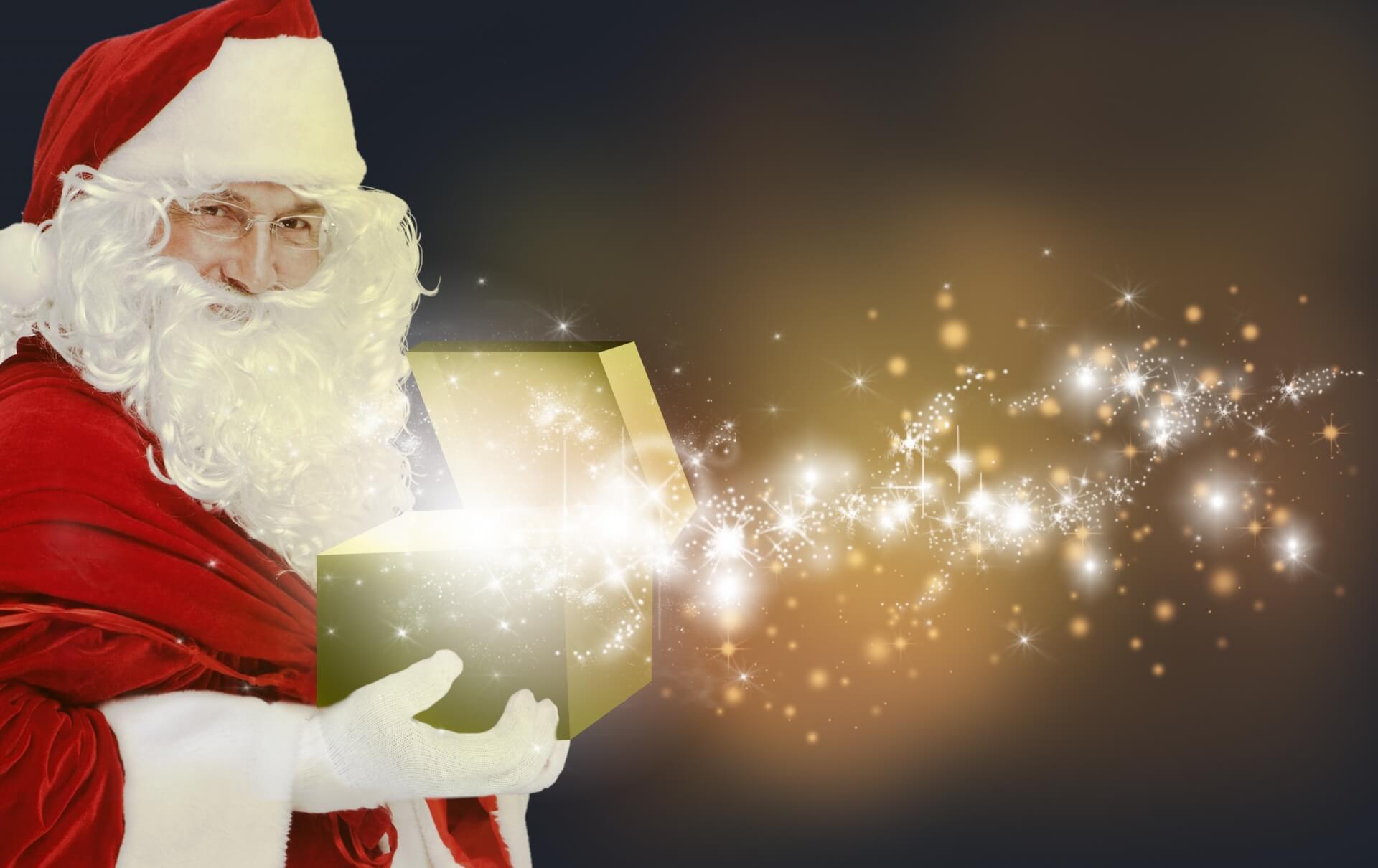 The Christmas season is also very big deal for theme parks in Japan. Ever year, Tokyo Disney hosts its annual Christmas parades in December, along with a variety of other Christmas-themed events, decorations, goods, and even foods. As one of the busiest times of the year for theme parks, Tokyo Disney’s Christmas celebration is not only popular for families with children, but is also a well-known date spot for couples on Christmas Eve. In recent years, other theme parks, such as Universal Studios Japan (USJ) in Osaka have had their own Christmas celebrations as well.

While Japan has adopted many of the Christmas customs of other countries, over the years they have incorporated them into their own culture as well.  Traditional Christmas songs are played on radios and in stores, and Japanese pop singers often release their own versions of popular Christmas songs. During the holiday season, there are also many TV specials and anime episodes centered around the theme of Christmas.

In a stark contrast to the family-oriented Western customs, in Japan, Christmas Eve is thought of as a romantic day centered around couples. In many ways, Christmas Eve in Japan is very similar to Valentine’s Day, for it is a day that couples spend together, go out on dates, and exchange presents. These days, young couples typically go to look at Christmas lights and have a romantic meal in a restaurant. In fact, booking a table on Christmas Eve can be quite difficult, as it’s such a popular night for couples to dine out. 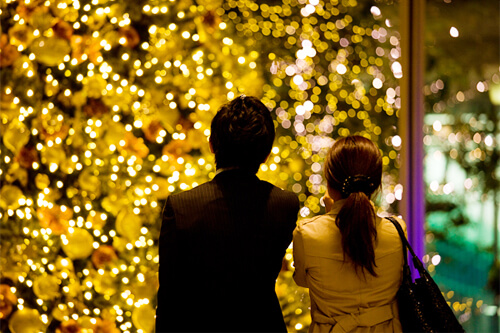 In Japan, fried chicken is often eaten on Christmas day. Christmas is the busiest time of year for restaurants such as KFC, which is actually the leading restaurant for “Christmas” fried chicken. Every Christmas, as many as an estimated 3.6 million Japanese families get their holiday meal from Kentucky Fried Chicken.

The trend can be credited to the manager of Japan’s first KFC, Takeshi Okawara, who ran the store that opened in 1970. The idea of a “party bucket” that’s sold on Christmas came to him after overhearing a couple of foreigners talk about how they missed the food they used to enjoy around this time of year. The KFC Christmas Chicken bucket was launched in 1974, and has been a hit ever since. These days, it’s not uncommon for families to preorder meals for Christmas Day weeks in advance. It’s easily the busiest time of year for the famous fast food chain.

Apart from KFC, the other traditional Japanese Christmas food is Christmas cake. Unlike the Western dense fruit cakes and rich figgy pudding, Japanese Christmas Cake is a light sponge cake topped with strawberries and pure-white whipped cream.  Japan’s love for Christmas cake dates back to 1922, when the  confectionery manufacturer Fujiya marketed the cakes with the tagline “kurisumasu ni ke-ki o tabemashou!” (“Let’s eat cake on Christmas!”). Today, traditional Christmas cake is sold at convenience stores, grocery stores, department stores, and bakeries all over Japan during the holiday season. A slice of the cake is even featured as an iPhone emoji! 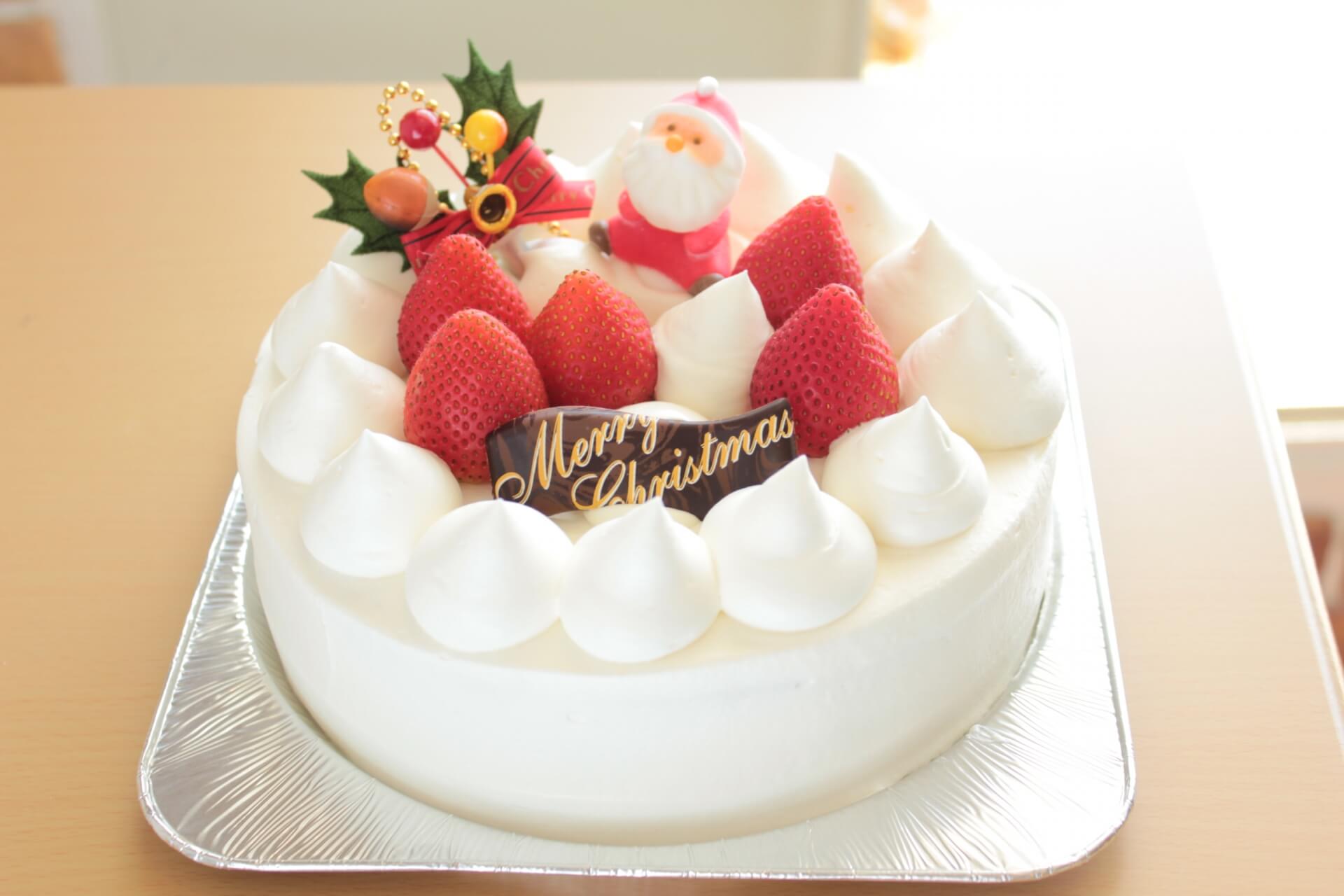 Christmas is for Couples, New Years is for Family

In short, in Japan, Christmas is a fun time for lovers and friends, for illuminations and dinner dates. The Japanese New Year holiday, however, is much more like a traditional Western Christmas. In Japan, New Years is the time where families get together, have a meal, pray, and send greeting cards.

Regardless of one’s home country or religion, it is certain that if you visit Japan during the Christmas season, you are certain to find holiday cheer in the air and colorful lights on every corner. Christmas is a wonderful time to be in Japan!