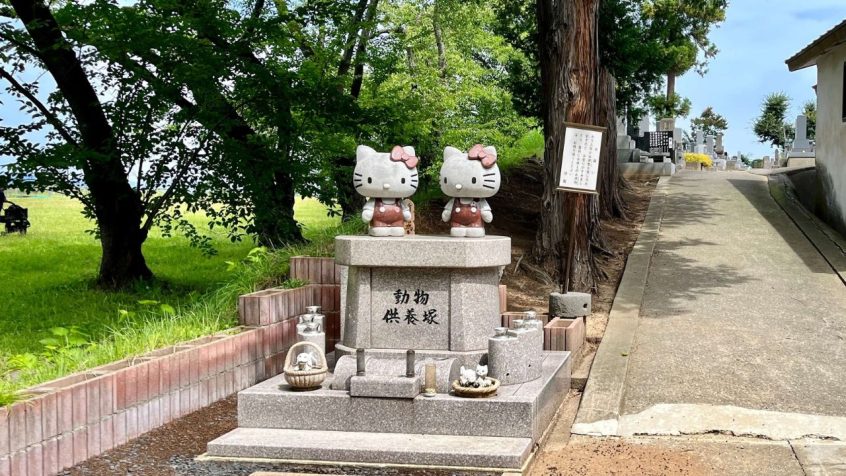 In Japan, there are many items with cat motifs, such as Hello Kitty and Maneki Neko. There are also many cat goods, and it seems that Japanese people are full of cat lovers. In this blog, I would like to introduce the history of cats and humans, cat cafes, cat temples, and a cat temple museum that I recently visited.

History of Cats and Humans 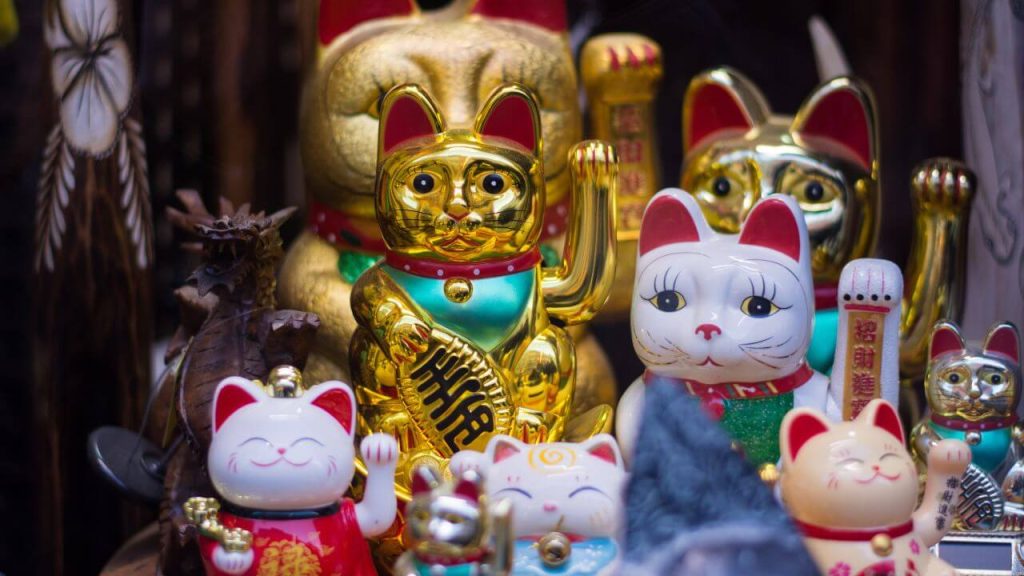 In the Edo period (1603-1867), cats became even more valued as a good-luck charm to exterminate rats. It was during the Edo period that cats began to be depicted in manekineko (beckoning cats) and ukiyoe (woodblock prints), and cats were considered to be creatures of good luck.

The number of cats increased, and as Edo became more urbanized, it became more common for common people to own cats, as the environment became more conducive for cats to live in. The urbanization of Edo also led to an increase in the number of rats, and it seems that cats were valued for their ability to exterminate them. As people’s lives became more affluent, it is believed that they began to keep cats and cherish them. 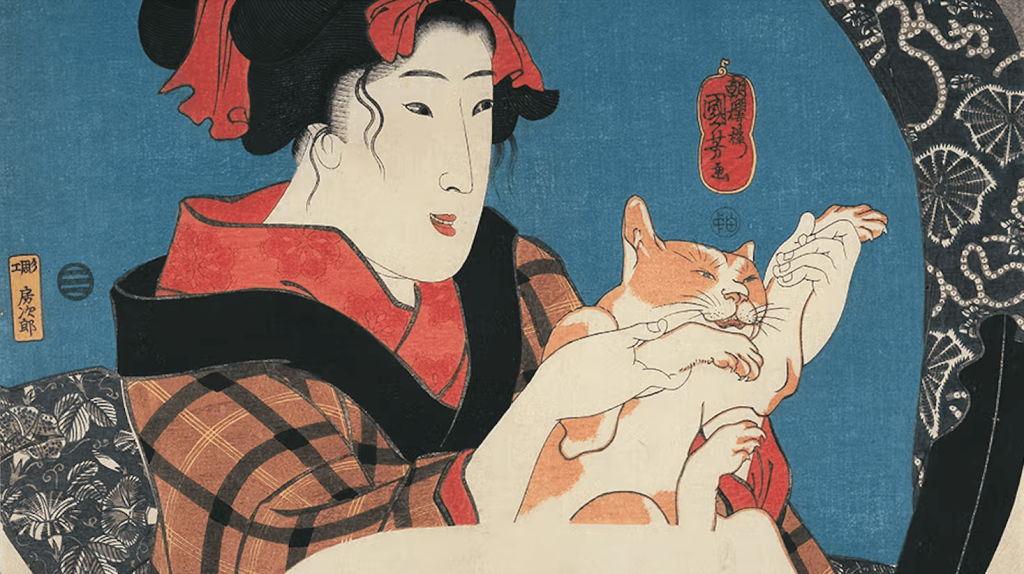 In the Meiji period (1868-1912), cats began to appear in even more paintings. Among them, the cats depicted in Yumeji Takehisa’s paintings of beautiful women are very famous, and they add a sense of fascination to the bewitching beauty of the paintings. Cats also appear in many literary works, most notably in Soseki Natsume’s “I am a Cat 吾輩は猫である”.

In Japan’s urban areas, there are many rental houses, and most of them prohibit the keeping of pets. In such circumstances, cat cafes have become a place of relaxation for people who want to be soothed by cats. 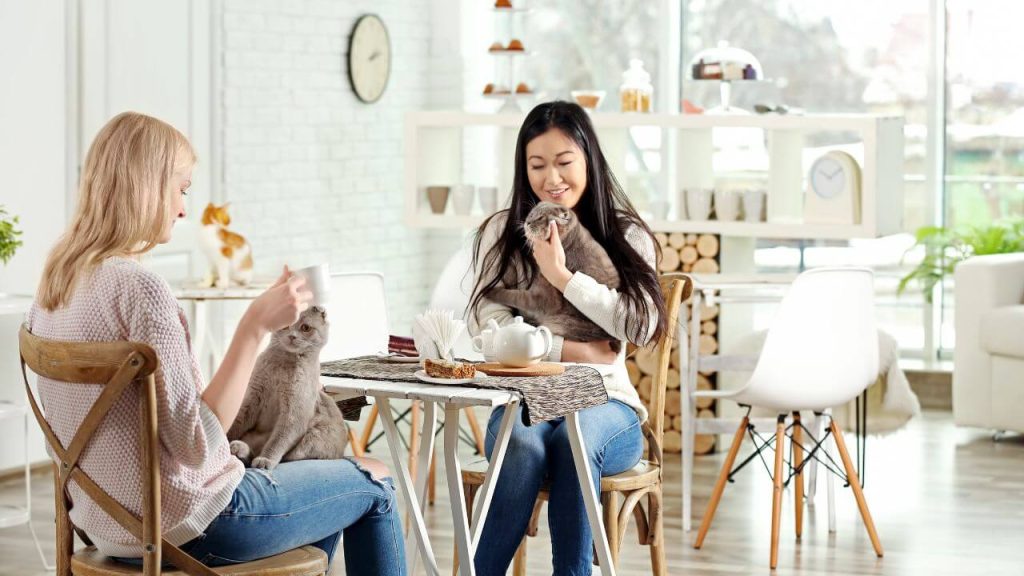 The first cat café in Japan, where cat lovers can play with live cats, seems to be “Cat Time,” which opened in Osaka in 2004. Today, cat cafes are commonplace, and there are now more than 500 cat cafes in Japan. The system in most cat cafes is that you enter the same space with the cats, spend time interacting with them while drinking coffee or tea, pay a fee, and then leave. 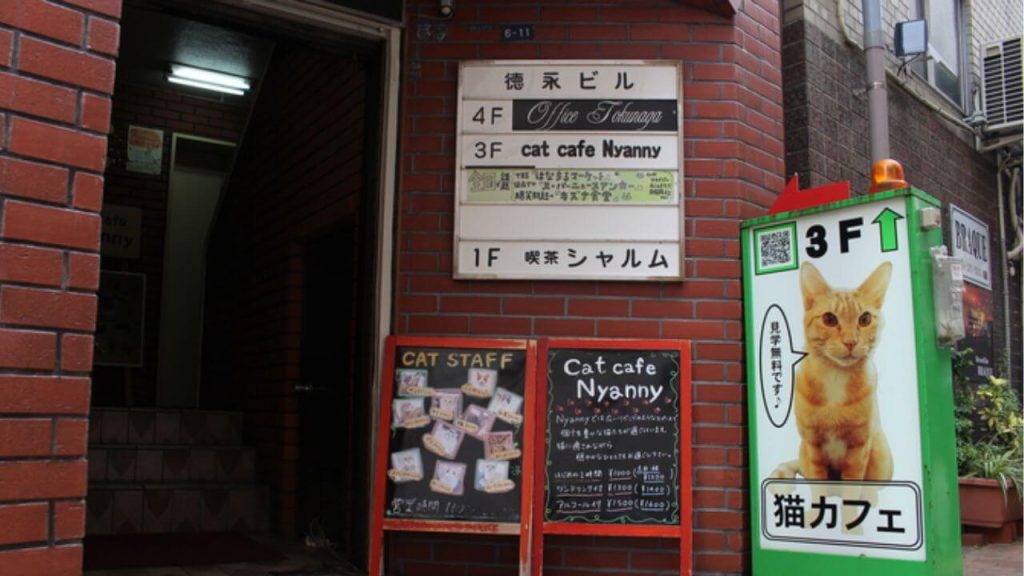 Rates and systems vary from store to store. Most stores charge by the hour, but some have a system where you can stay as long as you like. A typical example would be 600 yen plus one order for the first 30 minutes, and an additional 200 yen for every 10 minutes thereafter.

In Japan, there is a term called “funeral Buddhism. Most Japanese people, even those who are not familiar with their own religion, call for a Buddhist monk to perform the funeral ceremony. Pets are members of the family. Some temples offer joint burial services for both humans and pets, as people want to make memorial services for their pets after their death. Kanoji Temple in Kamiuma, Tokyo, is nicknamed “Cat Temple” because it frequently holds memorial services for pets. This temple started out as a kind gesture by the head priest, and now nearly 50% of all memorial services are for pets. 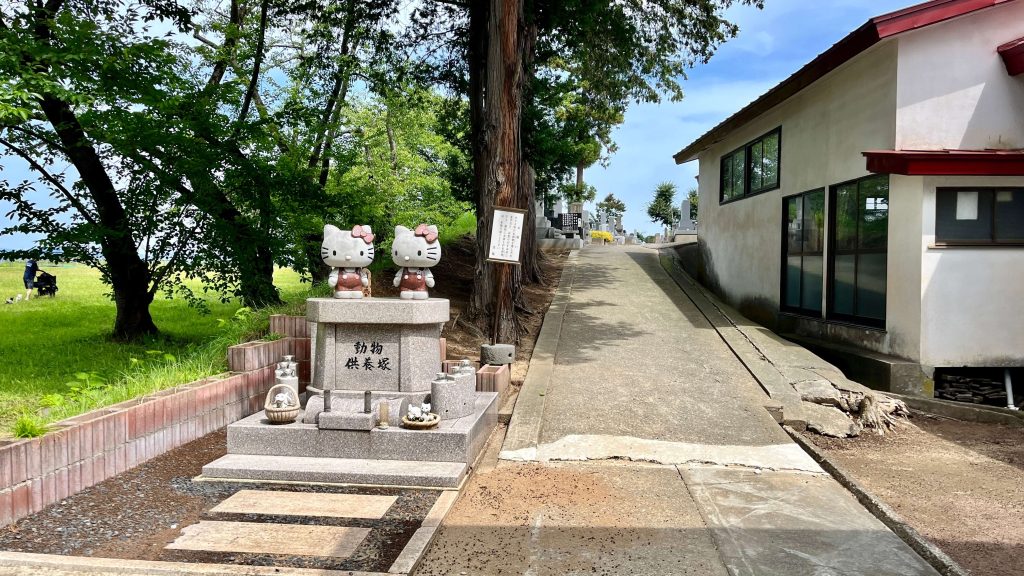 In addition to offering mourning services for pets, there are more than 20 “cat temples and cat shrines” throughout Japan, some of which worship cats as gods.

This is a website listing cat temples and shrines. This shows that the relationship between humans and cats has existed since long ago.

Ok, it’s neither a temple nor a cat cafe, it’s a museum of “cat temple” themed. Probably the only Cat Temple themed Museum in Japan.

This museum name is 猫猫寺 (read as Nyan-Nyan-dera). Japanese cats meow as “Nya-“ (at least we hear so). 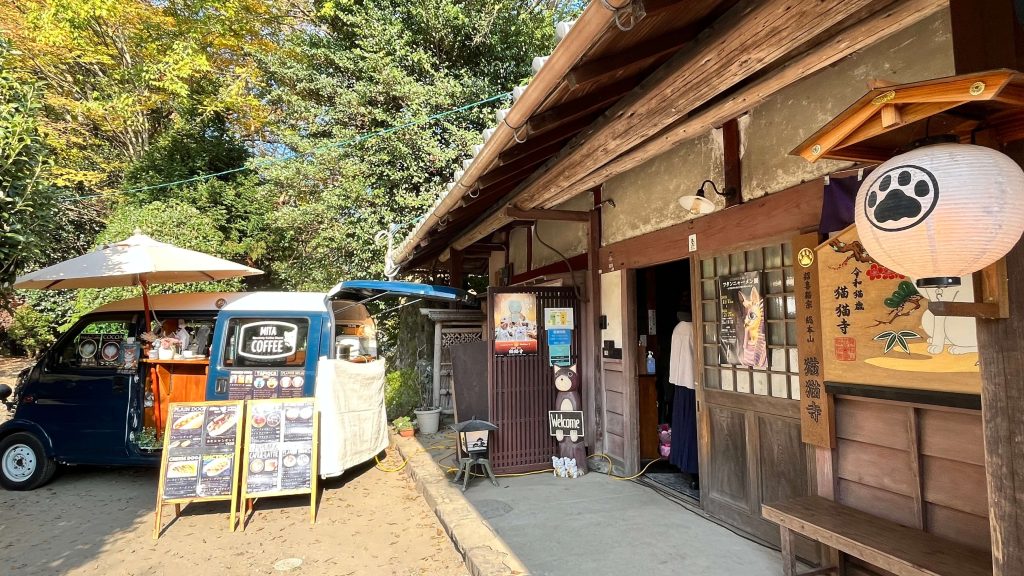 Special exhibitions are held from time to time, and when the author visited the museum, it was just the first day of the “Tutan Nyamen” exhibition.

Inside the museum, there were sliding doors with paintings of cats, a large amount of cat goods, cat tarot readings, and a stunning painting of a cat on the ceiling. 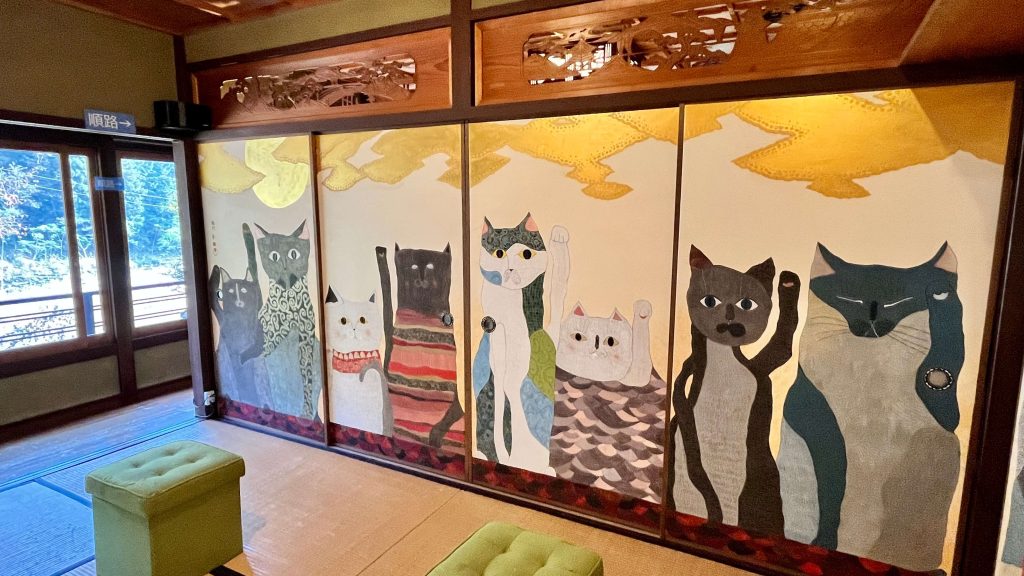 Find out more about Nyan-Nyan dera cat museum in this live streaming archive.
* If you don’t see the video properly, please watch from the Facebook Page Video.

Well, do you like cats? I know I asked this foolish question at the end, but I am actually a dog person.🐶

I was expecting to see cats when I came to this Neko-Neko-Temple Museum, but there was none at this time. We can’t blame that cats are fickle!

There was a space with stone statues of cats, so I let my dog, Tommy, play with them. He seemed to be locked on by the stone cats. 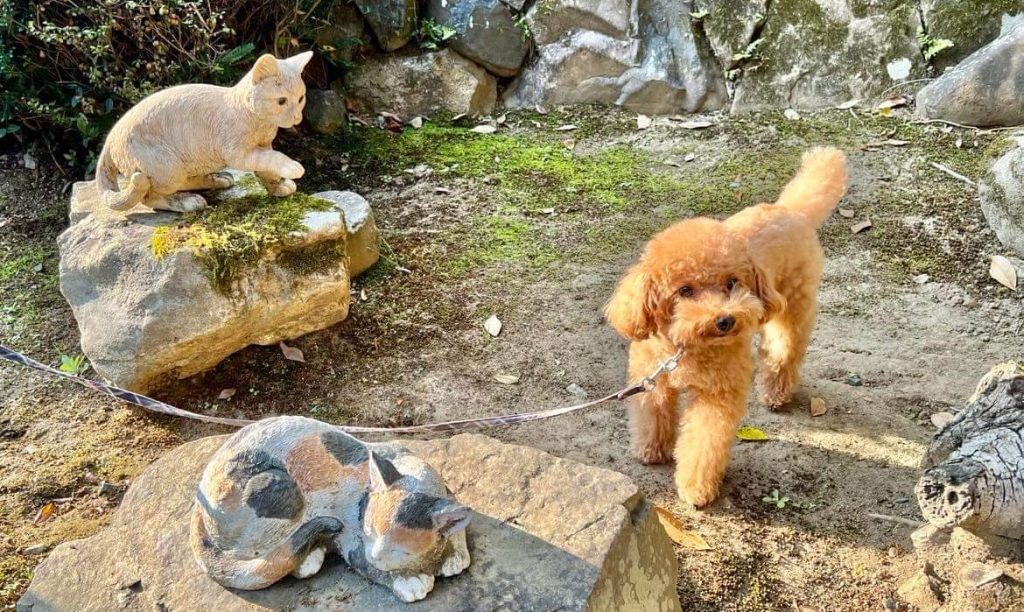 In this blog, we have introduced the history of cats and humans, cat cafes, cat temples and cat shrines, and Nyan-Nayn dera museum. We found that cats and humans have a long and deep historical relationship. Well, I have a dog, and I would like to continue to take good care of it.