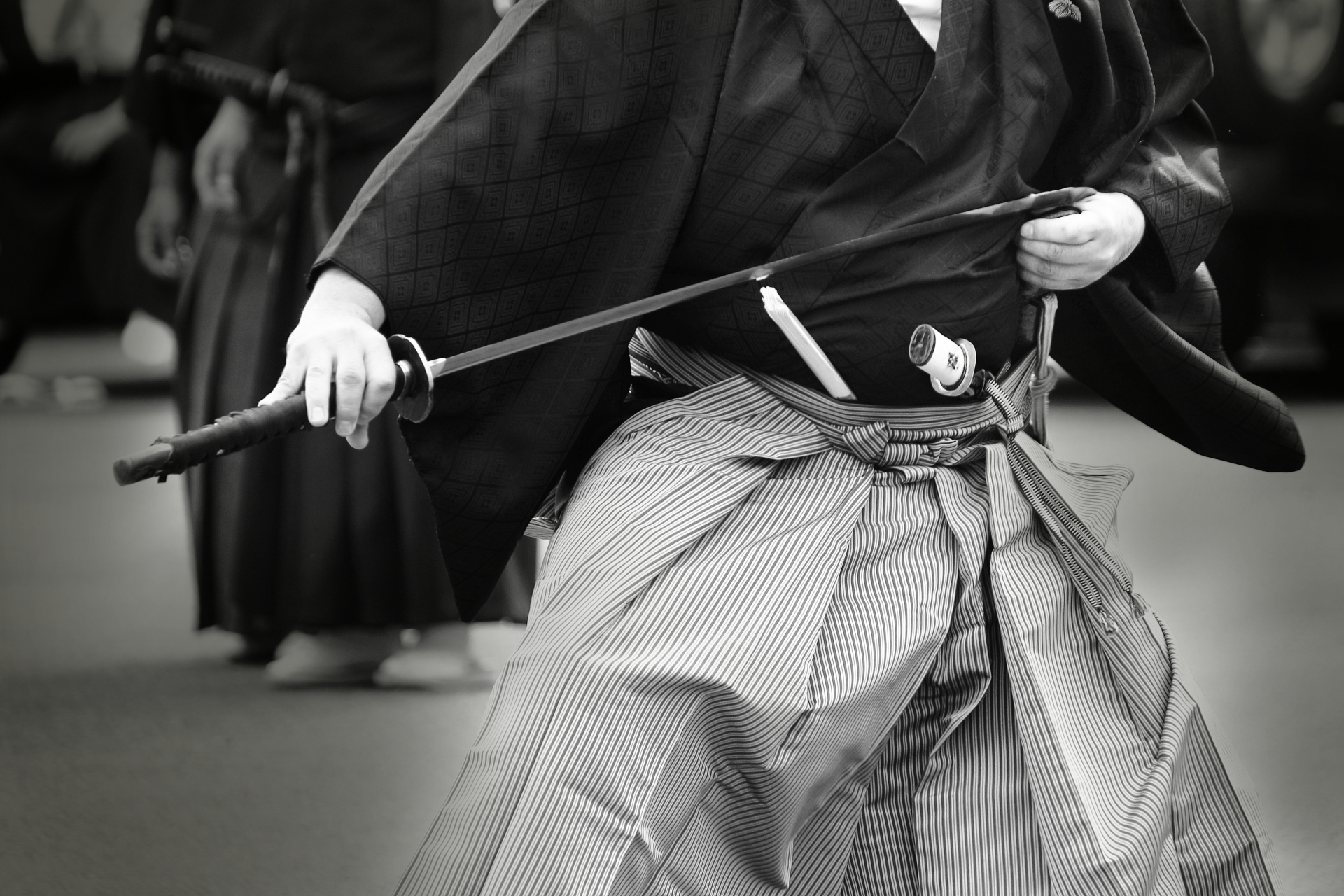 The term Bushido has long represented a broad spectrum of Japanese samurai values which carried different implications during various eras. Regardless of its iterations, “the way of the warrior” was a critical philosophy and code of conduct to guide martial rulers who held military and political power during feudal Japan.

It was during the Edo period that the word Bushido was first used to define the values and ideals of the ruling military class. The Tokugawa regime sought to promote uniformity of warrior values even though there was no official samurai code. The samurai were expected to have military acumen and a martial spirit as well as an undying devotion to a lord, a staunch commitment to duty, and the courage to sacrifice his own life either in battle or through ritual suicide for the sake of honor.

It was during the 17th and 18th centuries that a formal ethical code was established by the scholar Yamaga Soko (1622-1685) who is recognized for defining the samurai ideal. He described The Way of The Warrior as duty and loyalty above all practiced by a military figure who is a moral exemplar. He noted that it functioned effectively as an ethos perpetuated by the warrior’s lord and rewarded his service with favor. This mutual dependence between the samurai and the lord he serves are what scholars after Yamaga called the Bushido ethic.

When Emperor Meiji was restored as Japan’s ruler in 1868, the samurai class was abolished along with the feudal system. Regardless, the warrior archetype continued to perpetuate through literatures on Edo-period Bushido and served as a potent ideal in Japan. In 1899, Nitobe Inazo published Bushido: The Soul of Japan which characterized the warrior ethos as an embodiment of everything that was most admired in traditional Japanese culture and society. 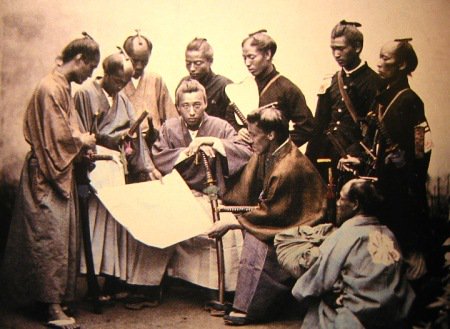 Here are some of the model warrior values that are most recognized in the code of Bushido:

Popular belief portrayed warriors as paragons of loyalty. Samurais were expected to demonstrate unwavering fidelity in word, deed, and even death. This was heavily influenced by Confucian behavioral ideals.

This loyalty was essential in the relationship between the samurai and the daimyo but beyond the bonds of the military retainer and his lord, feudal warriors also had commitments to their immediate family, their clan or bishidan leaders, and maybe even other samurai retainers or landowners. If a lord decided to change allegiance, the samurai was obligated to follow.

Even when the Bushido code called for an act that transgressed civil laws, the warrior was compelled to obey the code. The notorious 47 Ronin Incident of 1703 demonstrated this when former retainers of their fallen lord Asano Maganori assassinated Kira Yoshinaka in retaliation of Asano’s death which they considered unjust. The Tokugawa shogunate, who helped to promote the Bushido code, were forced to uphold the civil laws by punishing the ronin as a group and ordered them to commit seppuku (self-disembowelment on a sword). The ronins’ unflinching commitment to the code and their lord had made them heroes, much to the chagrin of the Tokugawa rulers.

Samurai had to conduct themselves in a manner that would reflect well upon their lord, their ancestors, and descendants. It was considered a reflection of individual character which may also affect the family reputation and could enhance or mar a lord’s social and political status. The idea that honor was bound to a family name, thus sharing it among its members past, present, and future, became a prominent notion of Japanese society in the 12th century.

This collective prestige or disgrace was referred to as “face” in English parlance and used in in the common phrase “to lose face.” In Japan, it is called meiyo which literally means “glory of the name.” Samurai must uphold allegiance to family, clan, and lord, who may not share the same name but share a collective reputation.

On is described as the debt incurred by a recipient of benefits (material or otherwise) and is equated to the concept of favor or indebtedness. Giri is the obligation to repay the On received through either material or other forms of repayment.

This obligation could arise from a variety of relationships such as between a samurai and lord, individual, and family group, employee and employer, or subject and lord. The dynamic of obligation of a warrior to the lord is such that the former incurs a large debt owing to the employment, land, and political protection given by the lord that the samurai is obligated to serve his lord often until death.

The Giri the warrior owes the lord is so profound that there is an unbreakable bond of duty. If the obligation is not obeyed however, the transgressor will face social disdain and even complete ostracization which not only disgraces individual honor, but those of the extended family or even of the entire domain. This intertwined dynamic of On/Giri is pivotal to the structure of feudal warrior society, and remains an important concept in Japan today.

The cultural renaissance brought about by the Heian period ushered in the importance of appearance because of the preoccupation of aristocrats with aesthetic beauty and elegance at that time. Manuals dictated the procedure for donning samurai armor and in latter periods, this has extended to instructing samurai on appropriate behavior and grooming on and off the battlefield.

Although mercenaries did not concern themselves with public image, the warrior elite recognized the power that external appearances gave in society and on the battlefield. During battle, one can clearly distinguish warriors by rank, division, and even region of origin. 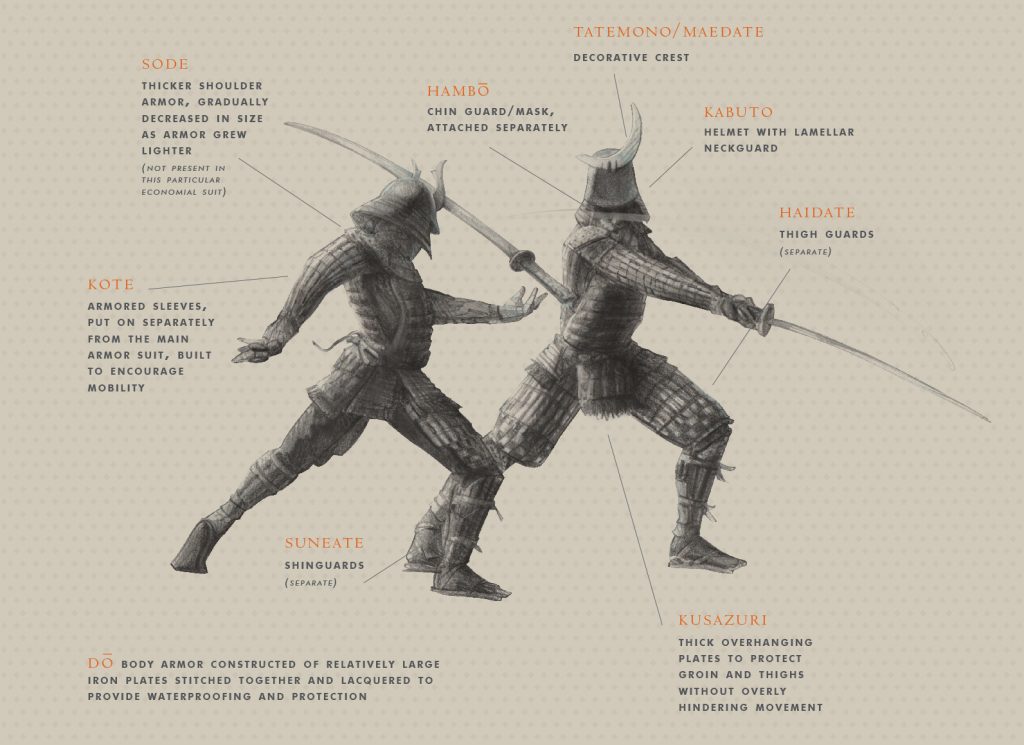 Marital unions became a concern from the 12th century onwards because political imbalances and power struggles at the time centered on family ties. Military alliances were forged through strategic bonds which were critical during the Warring States period (1467-1568).

Samurai marriages were once matrilocal, endogamous (marriage within a limited group of households), and polygamous during the Heian period, but this practice was discontinued. Marrying within a close group gave little advantage for samurai families who are trying to broaden their landholdings and alliances across provinces. Permanent marriages were isolated to members of the ruling military classes.

This is the practice of Japanese self-disembowelment, which was a way the samurai can achieve an honorable death when defeated or dishonored. Seppuku and hara-kiri have the same meaning although seppuku has a more formal expression. 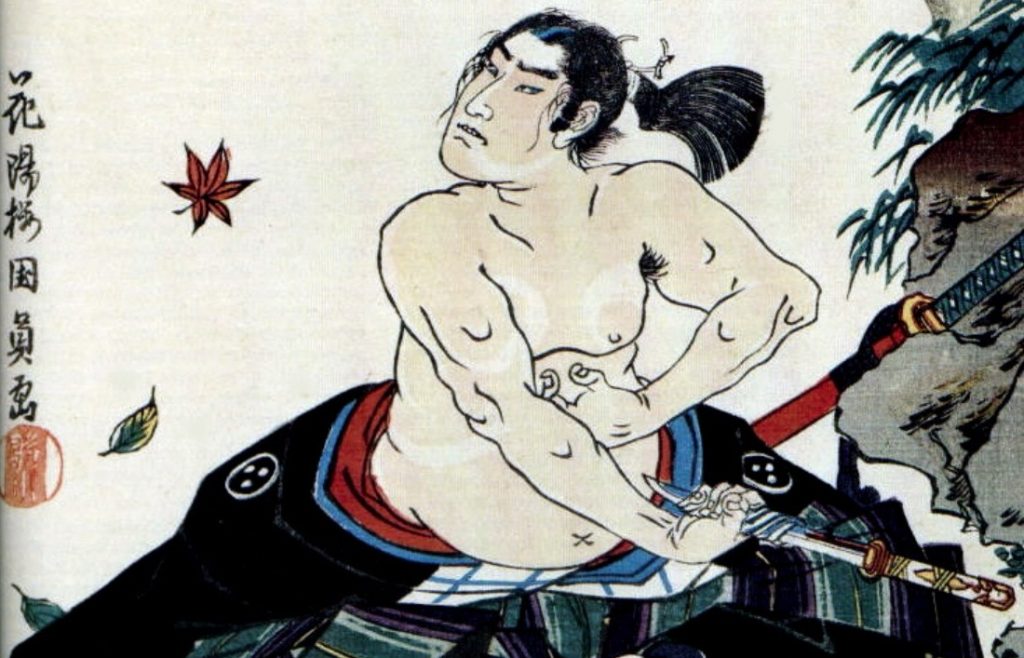 In Japan, the abdomen (hara) was considered the domain of the soul. It is also the center of the body and viewed as the point of origin for individual will, might, spirit, anger, and potential favor or generosity. Thrusting a knife therefore meant the destruction of the core of one’s humanity.

A warrior is obligated to commit seppuku if he kills another warrior without justification or drew a weapon inside the castle without any indication of self-defense. Death by seppuku warranted respect, thereby preserving the honor of the deceased warrior and his family. It falls on the daimyo to support the heirs and spouse of samurai who died honorable deaths.