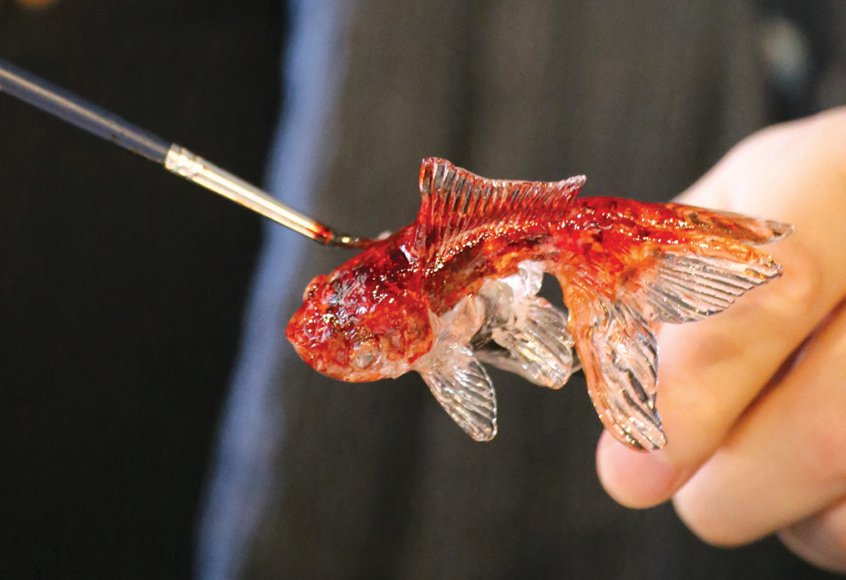 Amezaiku (飴細工) is traditional Japanese candy art. Making the incredibly detailed candies isn’t easy, as the material must be quickly molded by hand when it is still extremely hot! The best amezaiku artists can create unbelievably realistic-looking animal shapes, and some artisans also double as street performers who perform magic tricks and tell stories along with their candy craft entertainment. Read on to learn more about this traditional craft that becomes increasingly rarer in Japan every year.

The history of amezaiku dates back to the Heian period (794-1185), when the candy art was used for offerings at temples in Kyoto. During the Edo period (1603 – 1868), the craft spread beyond temples, when many forms of street performance began to flourish in Japan. It was also during this time that the main ingredient mizuame became widely available. Mizuame (水飴) translates literally to “water candy” and is a clear, thick, sticky liquid that is made by converting starch to sugars. Mizuame is produced in a very similar fashion to corn syrup and is very similar in taste.

By the end of Edo period, amezaiku had become the artistic craft that it is today. 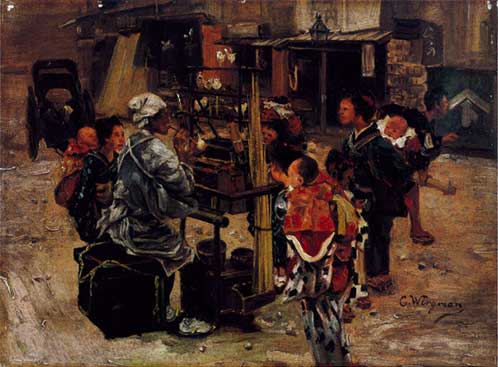 Centuries ago, candy vendors used to carry all of their various tools inside a single box that would they sit on while they worked. Originally, amezaiku artisans used only a small amount of candy on the end of a reed stem. Thy would enlarge and shape the candy by blowing in air, in a technique that is very similar to glass-blowing.

Some artisans today recreate this ancient technique by using a rubber pump instead of blowing into the candy, as this method was actually outlawed in the 1970s due to the fact that it was unhygienic. However, other than that change, the way the candy is made today does not differ much from the past. The technique is incredibly fast, and must be done during a short period of time, while the mizuame is still malleable.

Amezaiku candy is not easy to craft, as the sculpting involves many steps. First, to make the base ingredient mizuame, glutinous starch syrup is boiled until it becomes dough-like and transparent. Then, the material is heated over charcoal, making the candy very pliable. The material is then divided into small portions and stored until future use. 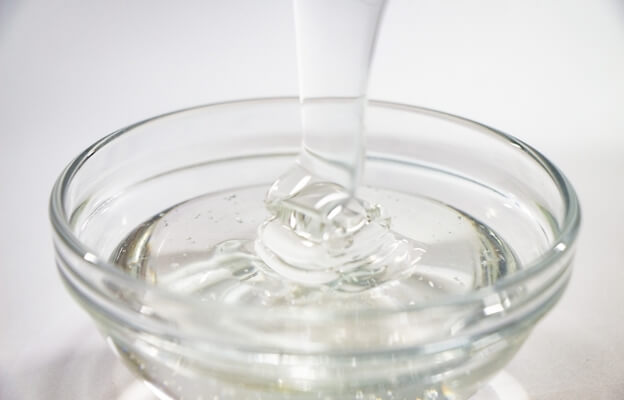 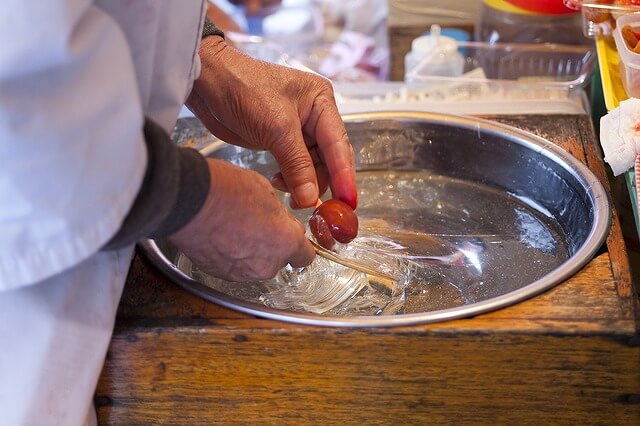 At the stall, the candy ball is heated to make it pliable again. After the candy is heated, it becomes malleable once more. The hot candy is quickly rolled and mounted on a stick, then pulled, twisted and clipped into form. The animal shapes must be formed quickly, using tiny scissors and the artist’s own fingers. Speed is important, as the sculpture must be completed before the candy cools and hardens again. This part of the process requires an incredibly amount of practiced pain tolerance from the artist, for the hot candy is very hot to the touch!

After the sculpture has been shaped and sculpted, many artisans hand-paint details to make it even more realistic. The paint is made from red, yellow, and blue food coloring, and is completely edible. 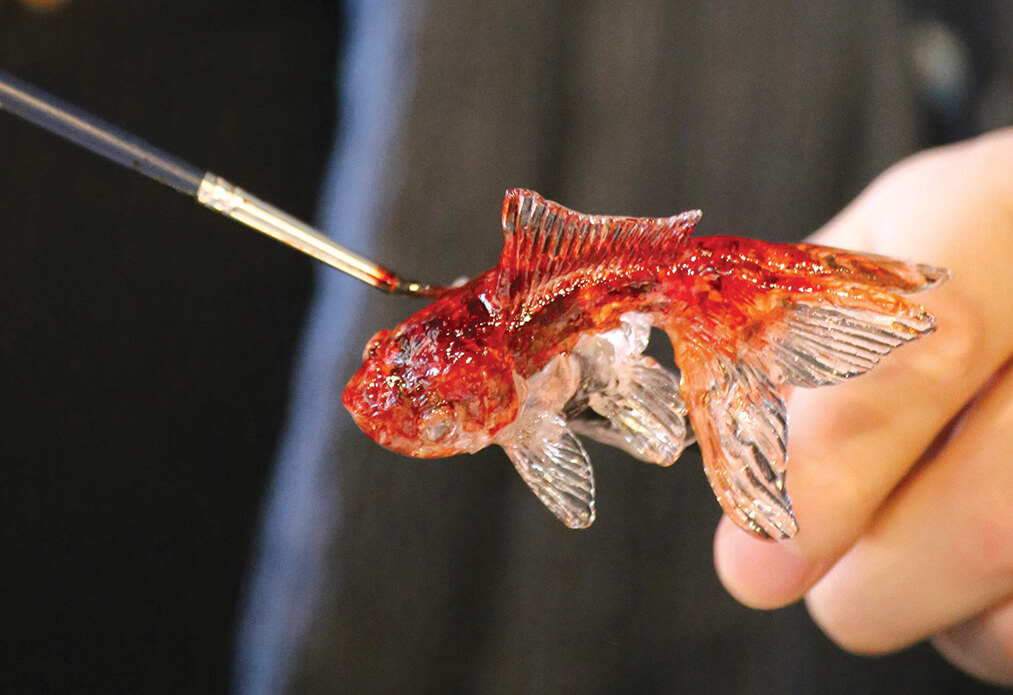 Where to Buy It

Over the centuries, and especially recently, the craft of amezaiku has become a bit of a dying art. The first amezaiku store in Tokyo was only opened in 2008, and at that time, Takahiro Yoshihara, the owner, estimated that there were only about 30 artists left in the entire country.

Though amezaiku is dying out as street craft, it has gained a bit of buzz in social media, where it becomes more noticeable to the next generation. One young artisan named Shinri Tezuka runs two successful shops in Tokyo, and has done a lot towards bringing more attention to the art at just 29 years old. There are also a few specialty shops located around Japan, where you can purchase a piece for anywhere from 600-4000 yen. 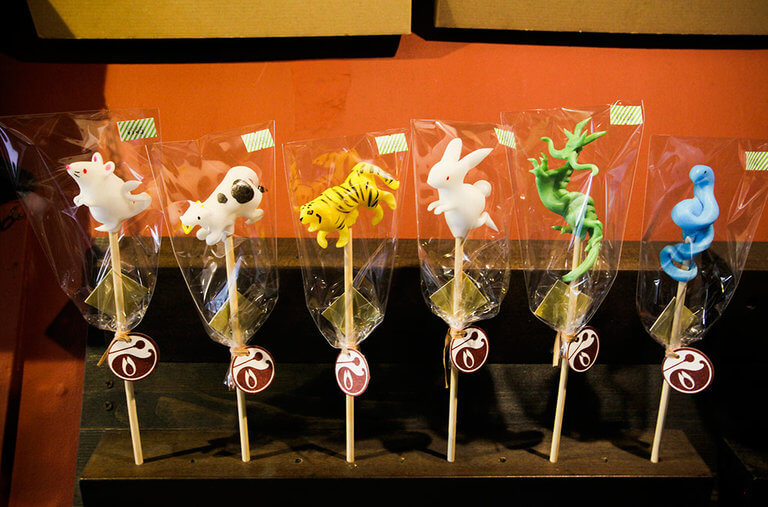