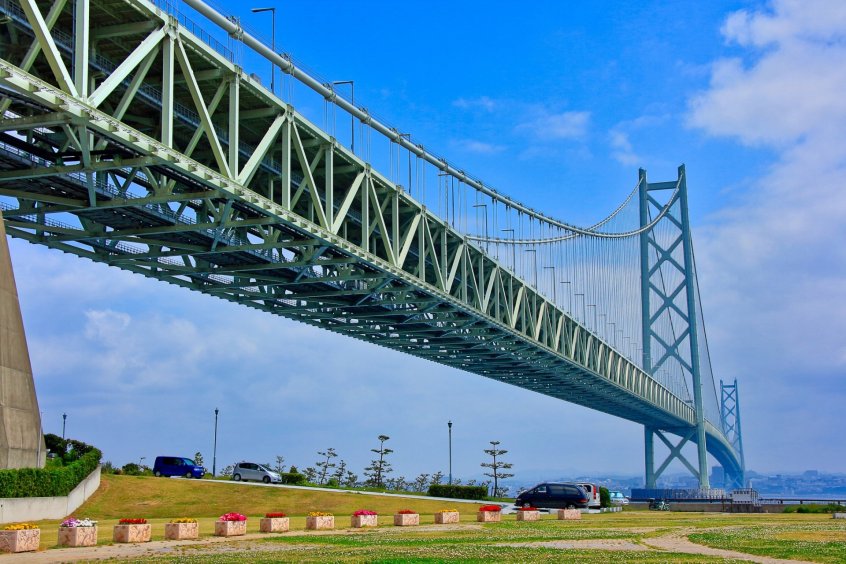 Did you know that the world’s longest suspension bridge is located in Japan? Called the Akashi Kaikyō Ōhashi (明石海峡大橋), the bridge is famous for its revolutionary engineering and stunning views. People can even take tours and climb it! Here’s everything you should know about Japan’s incredible Akashi Kaikyō Bridge.

The Akashi Kaikyō Bridge (明石海峡大橋) is a suspension bridge that connects Kobe City on the Japanese main island of Honshu to Awaji Island. It crosses over the Akashi Strait (Akashi Kaikyō, 明石海峡) as part of the highway that runs from Honshu all the way to Shikoku. The bridge was completed in the Spring of 1998, and at 1,991 meters (1.237 mi), it boasts the title of having the longest central span of any suspension bridge in the world. 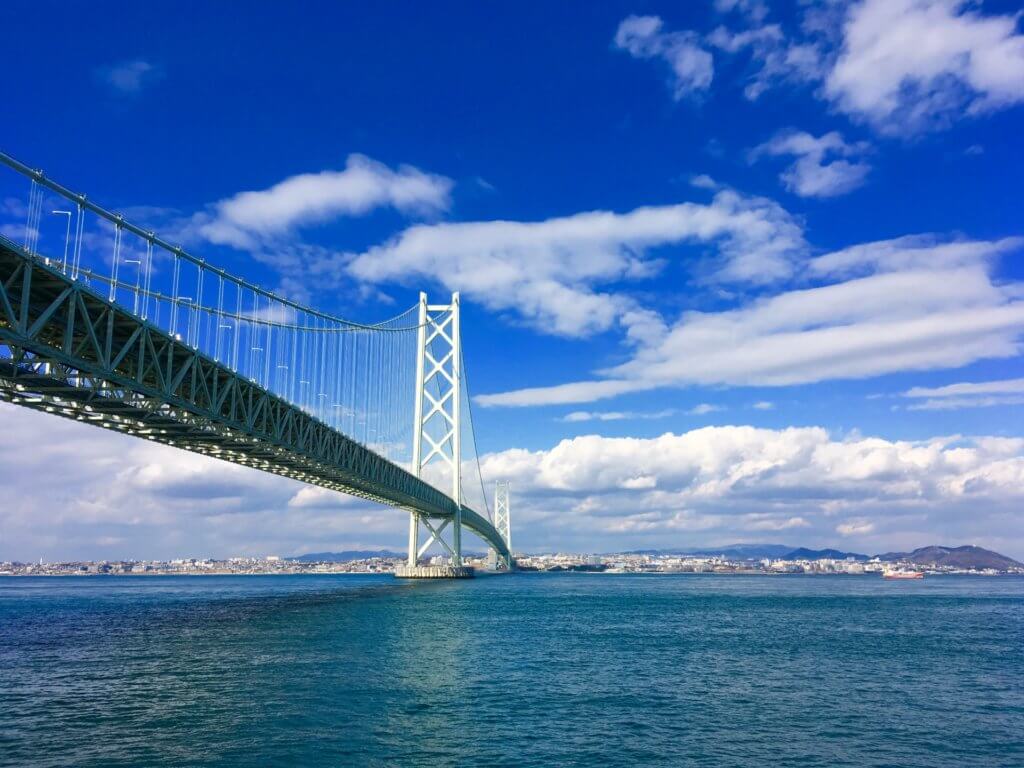 Before the Akashi Kaikyō Bridge was built, passengers crossed the Akashi Straight on ferries. This stretch of water is actually quite turbulent and often experiences dangerous storms. In 1955, two ferries full of passengers sank in the strait during a storm, and 168 people were killed. This tragedy led the Japanese government to develop plans for a bridge to cross the strait.

The original plan for construction was for a combination railway-road bridge, but when the work on the bridge began in April 1988, the construction plan was changed to a 6-lane roadway. Actual construction did not begin until May 1988, and involved contributions from over 100 different contractors.

When the bridge was finally completed and opened for traffic on April 5, 1998, the occasion was marked by a ceremony officiated by the Crown Prince Naruhito, the Crown Princess Masako, and the Construction Minister Tsutomu Kawara. 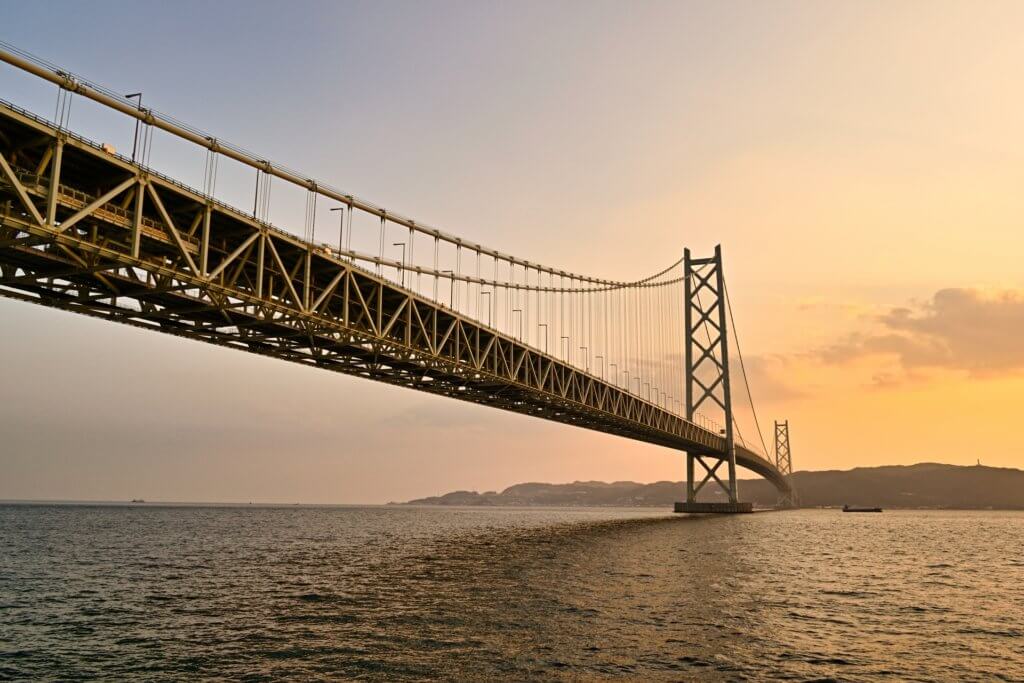 The construction of the bridge required incredible engineering, advanced technology, and the development unique methods and materials to ensure the massive endeavor was a success. The foundation depth of the bridge alone was equivalent to that of a 20-story apartment. Underwater non-disintegration concrete was also specifically developed for the bridge’s construction, for better fluidity and consistency than regular concrete.

Nearly 181,000 tons of steel and 1.4 million cubic meters of concrete were used in the construction of the bridge. 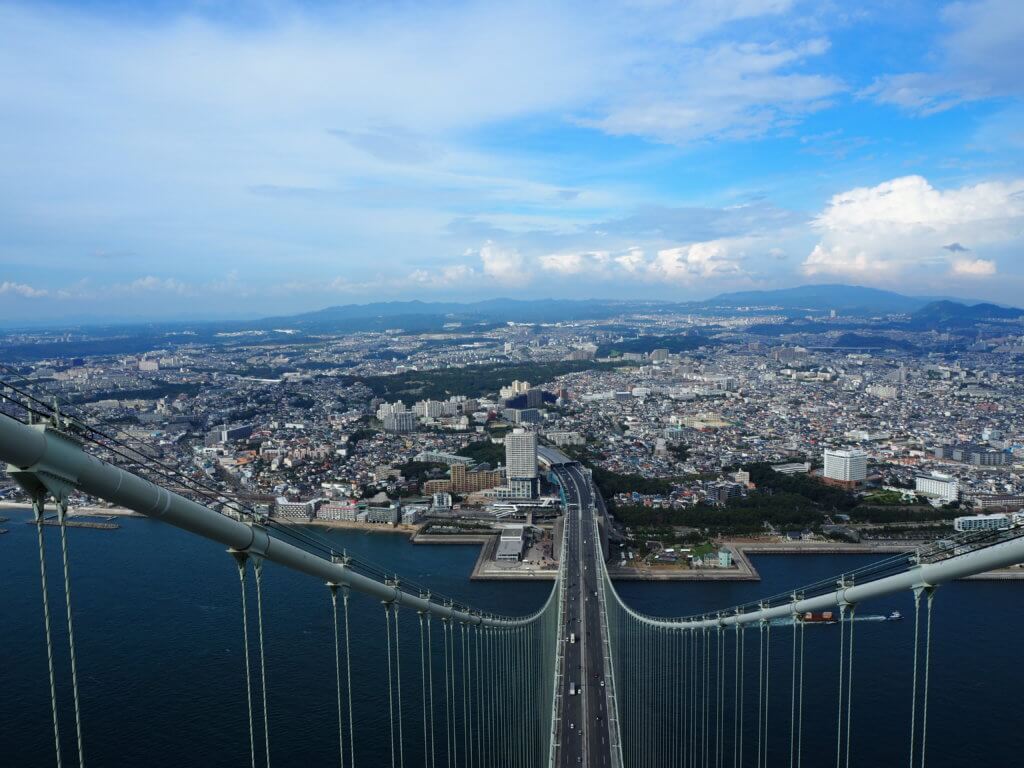 The bridge’s two towers were originally 1,990 meters (1.24 mi) apart, but on January 17, 1995, the Great Hanshin earthquake  moved the towers so much that the span had to be increased by a meter. Fortunately, only the towers had been built at the time of the quake.

As expected, the cost of this unprecedented project required a significant expense. The bridge cost an estimated 500 billion Japanese yen (U.S. $3.6 billion) to build in its entirety from start to finish. The expenses were to be repaid by charging drivers a toll to cross the bridge. The toll is 2,300 yen ($21.25) and the bridge is used by approximately 23,000 cars every day. This number of course varies depending upon holidays and even weather. 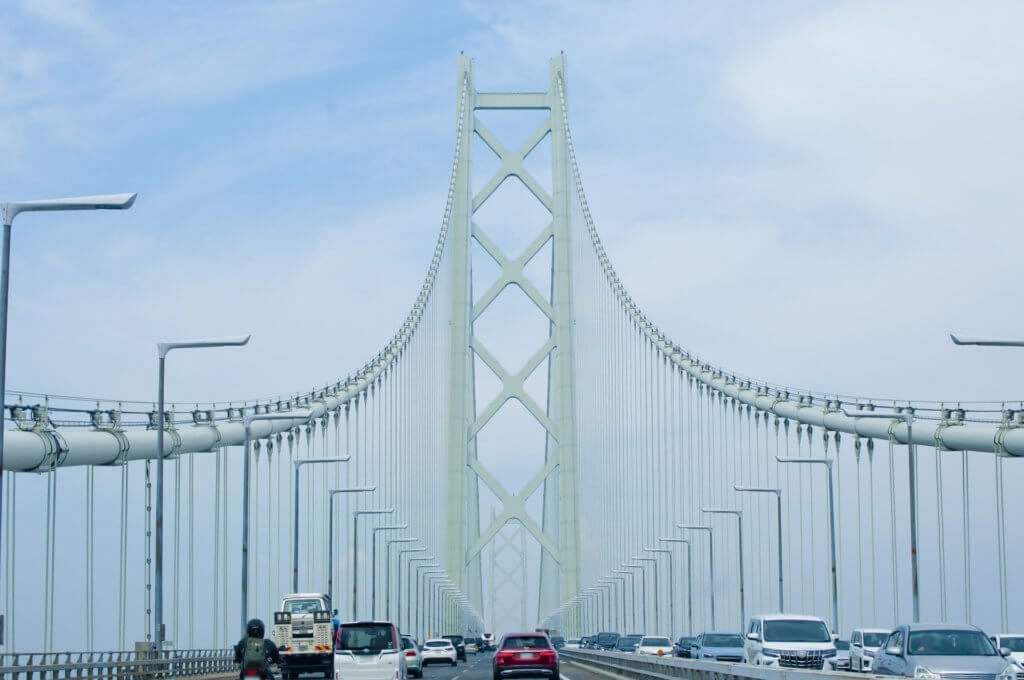 The high cost of construction was mostly due to the seismic design elements that had to be incorporated to counteract the high levels of seismic activity of the region. The seismic design features of the bridge are quite different and unique when compared to similar bridges constructed in the past. Not only is the substructure is extremely large, but Finite Element Method (FEM) was used to check the seismic stability of the bridge’s foundations. 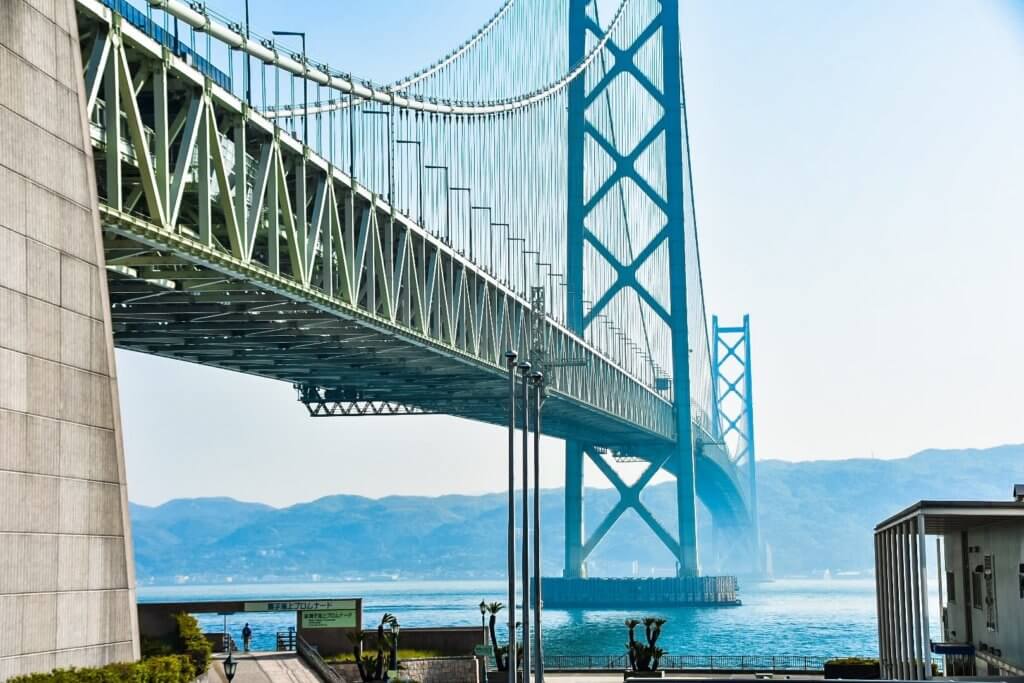 In addition to seismic activity, the Akashi Kaikyō Bridge was carefully constructed to be especially resistant to all kinds of extreme sitations. The bridge was designed with a special system that allows it to withstand winds of 286 kilometers per hour (178 mph), as well as earthquakes measuring up to magnitude 8.5, and even strong sea currents. The bridge also contains tuned mass dampers that are designed to operate at the resonance frequency of the bridge to dampen any forces. 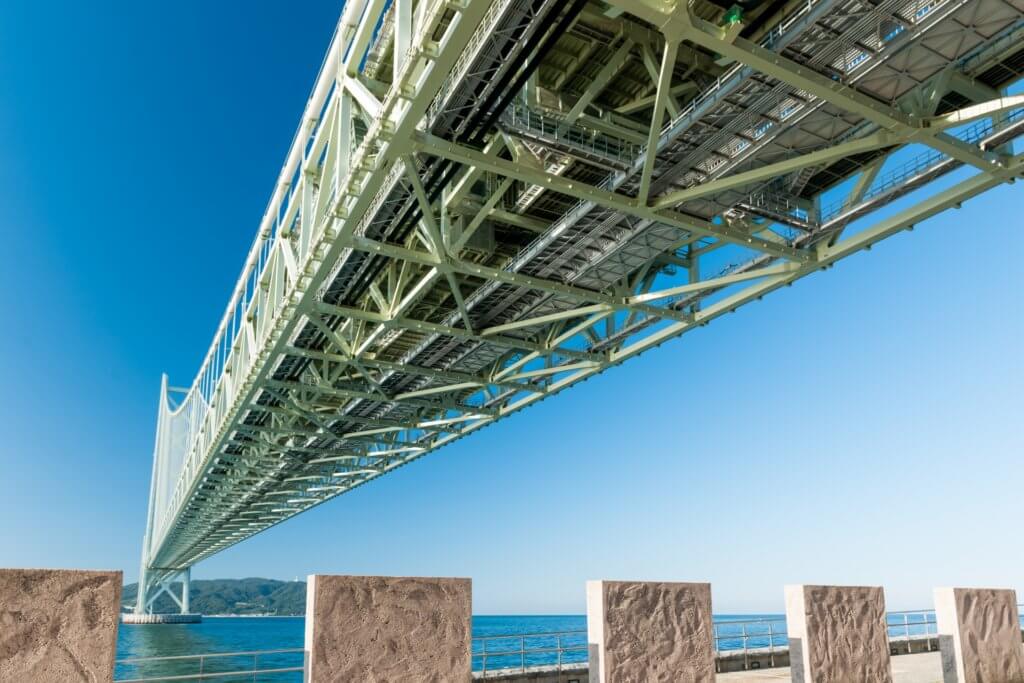 At night, the Akashi Kaikyo Bridge is lit by an impressive 1,737 illumination lights. 1,084 lights are on the main cables, 116 on the main towers, 405 on the girders and 132 on the anchorages. Sets of three high-intensity discharge lamps in the colors red, green and blue are mounted on the main cables. The bridge makes use of an RGB color model and computer technology to create a variety of combinations. There are 28 different patterns that are used for special occasions as national or regional holidays, memorial days or festivities. 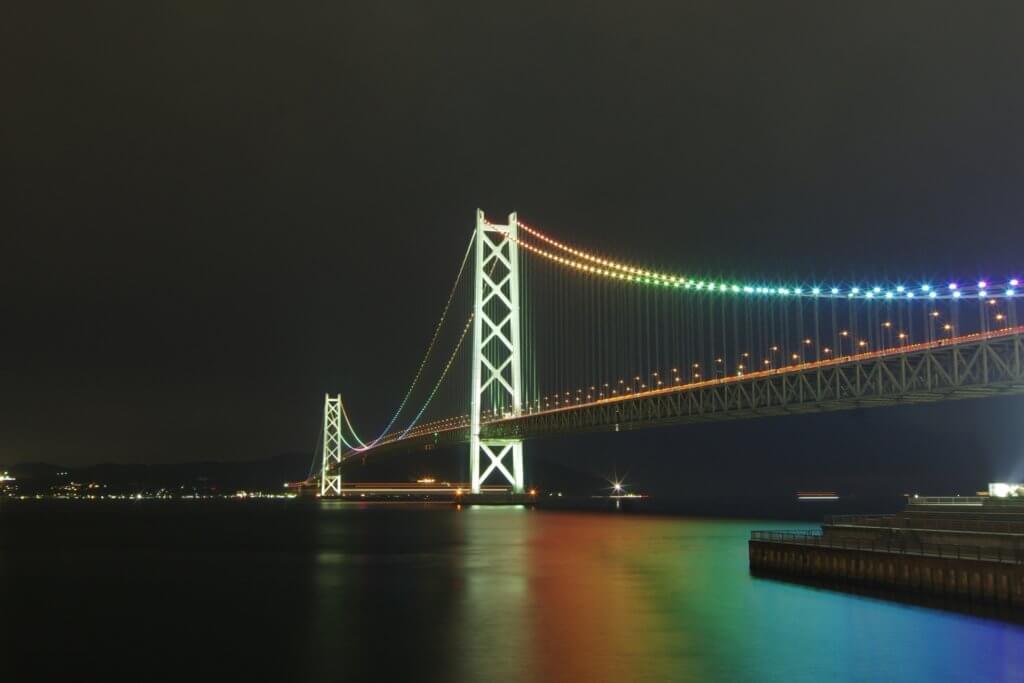 Today, the bridge offers interactive tours for those interested in the construction as well as the incredible views. 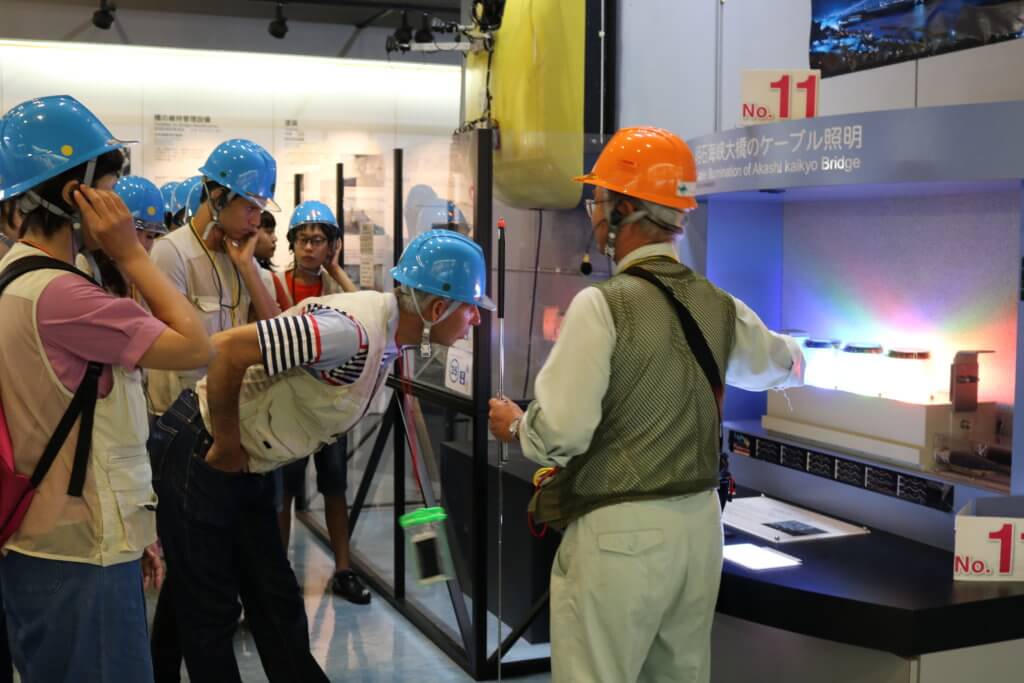 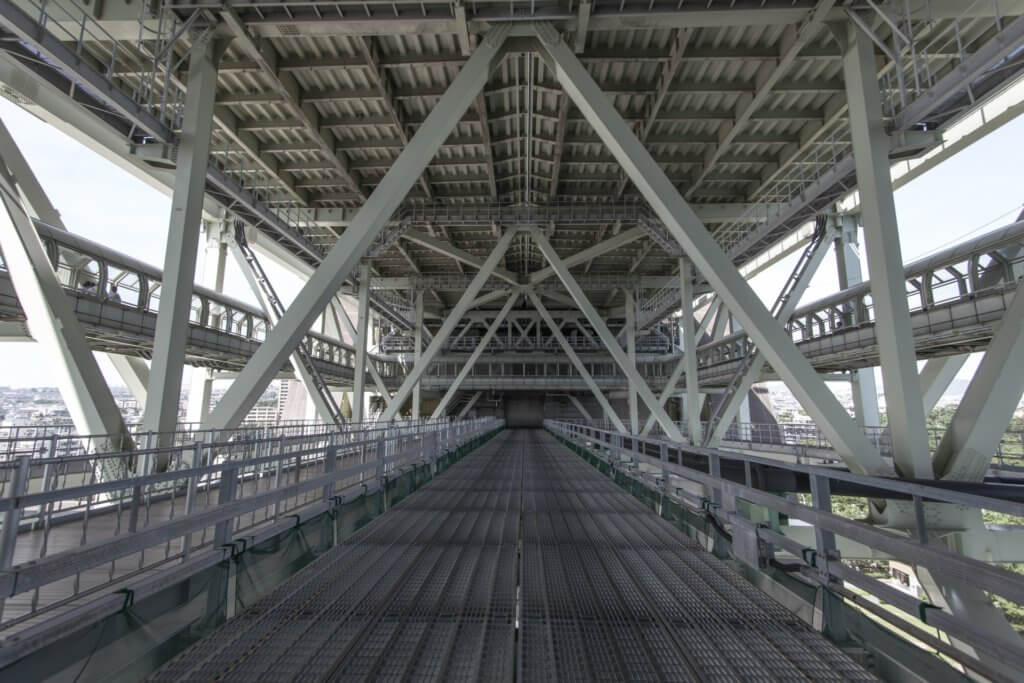 The Bridge Exhibition Center and the Maiko Marine Promenade are located a short walk from Maiko Station on the JR Sanyo Line or Maiko-Koen Station on the Sanyo Railway Main Line.

We joined a tour on the Akashi Bridge! Check out our Facebook live to see the incredible view: