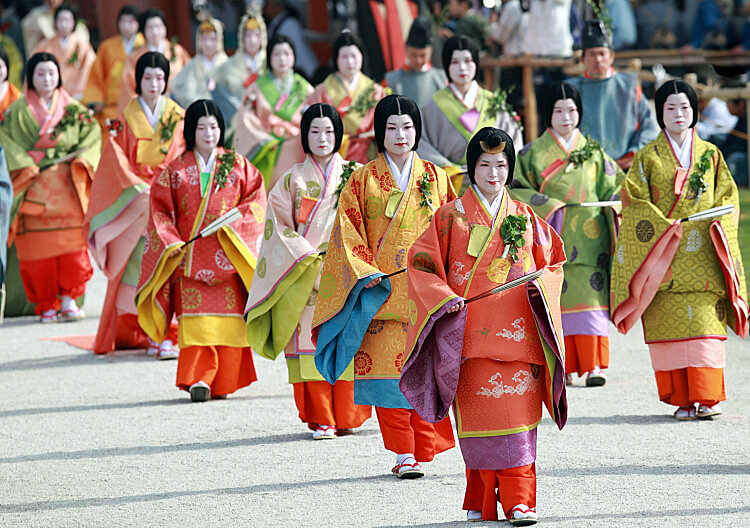 The Aoi Matsuri (葵祭) is one of the three most important annual festivals held in Kyoto, Japan. Held every year on May 15, the festival is known for an incredible procession of over 600 people in authentic Heian-era costumes. Here is everything you need to know about the famous Aoi Matsuri!

Aoi Matsuri is considered one of the three biggest festivals in Kyoto, the other two being the Festival of the Ages (Jidai Matsuri, 時代祭) and the Gion Festival (Gion Matsuri, 祇園祭). It is a festival of the two “Kamo” shrines in north Kyoto City –  Shimogamo Shrine and Kamigamo Shrine. The festival’s official name is actually Kamo Matsuri because of this association with the shrines, but it is more commonly called Aoi Matsuri by locals.

Aoi is Japanese for “Hollyhock”, referring to the Hollyhock leaves that are worn by the members of the procession and used as decoration throughout the celebration. These leaves were once believed to protect against natural disasters, which is the reason the festival first originated. 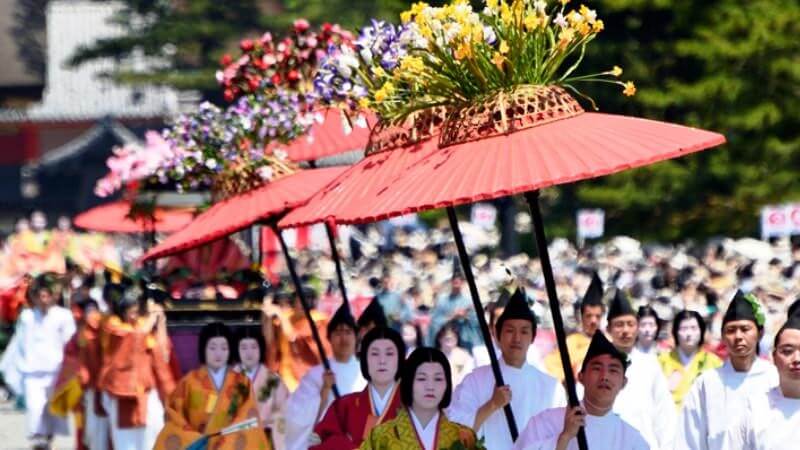 Aoi Matsuri is actually the oldest festival in Kyoto that is still being held to this day. According to the ancient record Nihon Shoki, the festival originated during the reign of Emperor Kinmei (CE 539-571), when a series of heavy rains with destructive winds ruined the crops and harvests. Because diviners declared it to be the result of punishment from the Kamo deities, the Emperor sent his Imperial Messenger with an accompanying group in a procession to the shrine to conduct various acts to appease the deities, in prayer for a bountiful harvest. These rituals included riding a galloping horse.

These rituals became an annual practice, and the galloping horse performance developed into an horseback archery performance called yabusame (流鏑馬). According to the historical record known as the Zoku Nihongi (続日本記),  so many people had come to view this equestrian performance on the festival day in the 2nd year of the reign of Emperor Monmu (697–707), that the event was banned. 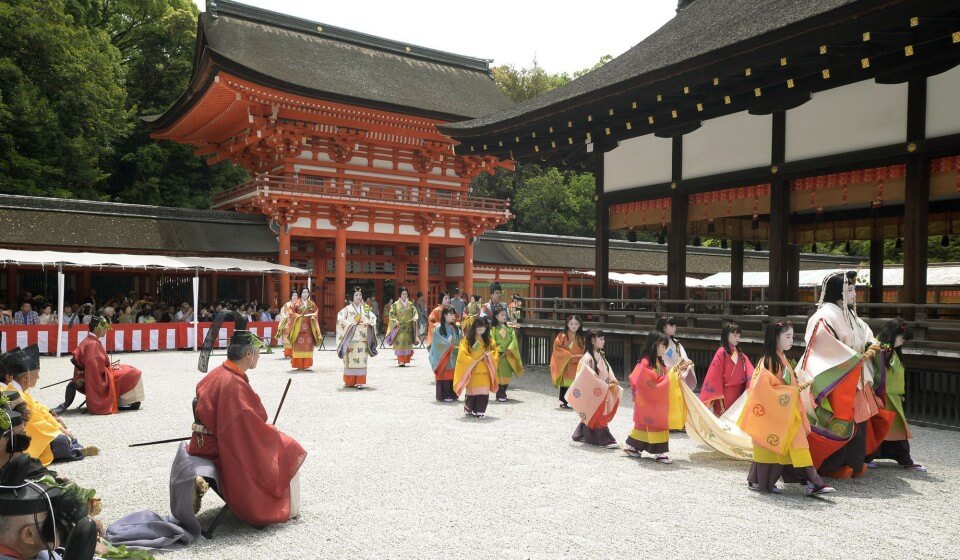 The popularity of the festival soared in the middle of the Heian Period, but dropped in the Kamakura period and the following Muromachi period, and as the nation entered the Sengoku period of civil war, the festival was discontinued. In the Genroku era (1688–1704) of the Edo period, it was brought back, but in the 2nd year of the Meiji period (1869), when the capital was moved from Kyoto to Tokyo, observance of the festival procession stopped once again. In Meiji-17 (1885), it was again revived as part of a government plan to enliven Kyoto. In 1944, as a result of World War II, all events and processions except for the rituals at the shrine fronts were discontinued. But finally, the festival procession started to be held again from the year 1953. The Saiō-Dai festival princess tradition was initiated in 1956, and continues to be upheld to this day. 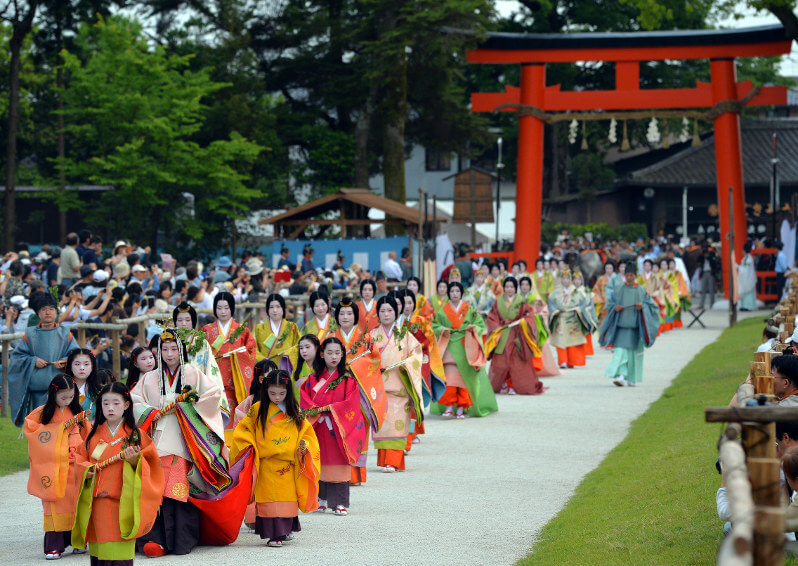 Although there are rituals and events leading up to the festival day, the main event of Aoi Matsuri is the grand parade held every year on May 15th. Starting from the site of the former Imperial Palace, hundreds of participants dressed in Heian period clothing form two processions – the first parade made up of men, the second of women. The first procession is the Imperial Messenger’s, accompanied by court nobles, soldiers, and offerings. The second, the Imperial Princess’s, is made up of noble women, ladies in waiting, and priestesses. Compared to other festivals which feature lively parades, this is a very stoic and proud event. 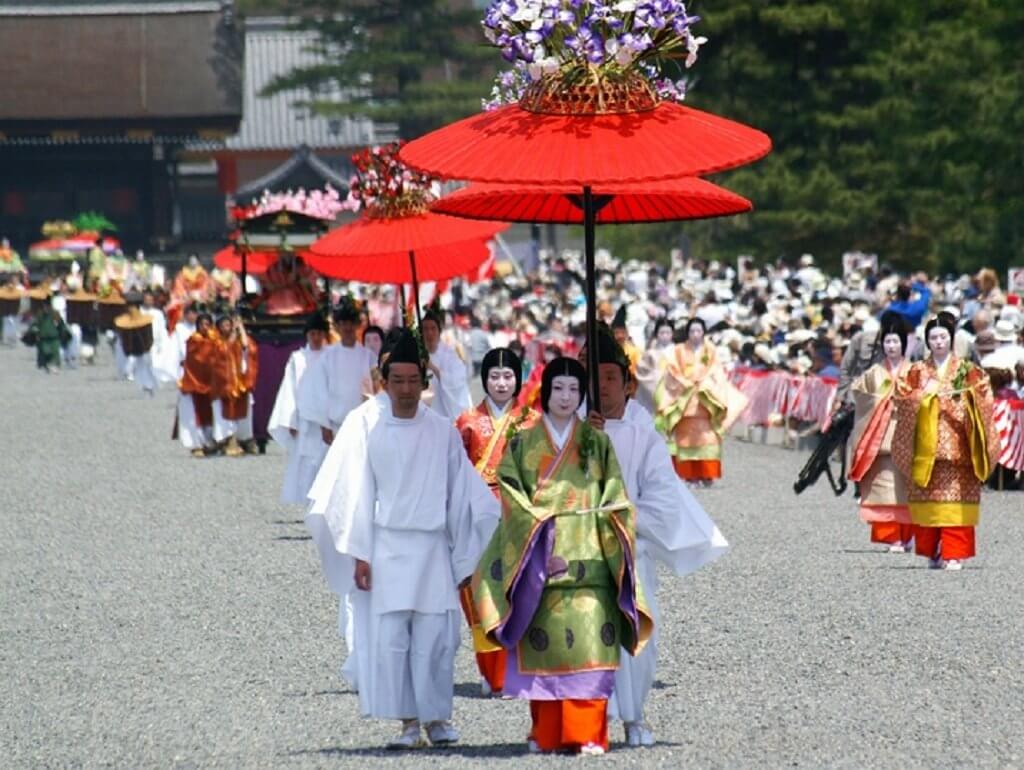 There are two parts to Aoi Matsuri: the procession and the shrine rites. The procession is led by the Imperial Messenger. Following the imperial messenger are: two ox carts, four cows, thirty-six horses, and 600 people, all of which are dressed in traditional Heian period apparel donning aoi  (葵, hollyhock) leaves.

The procession starts at the Kyoto Imperial Palace, slowly working its way towards the Shimogamo shrine, and finally finishing at the Kamigamo shrine. When they arrive at one of the shrines, the procession pauses in order for the Saiō-Dai and Imperial Messenger to perform their rituals.

There are two main figures in the Aoi Matsuri: the Saiō-Dai and the Imperial Messenger. Traditionally, the Saiō-Dai was a woman who is chosen from the sisters and daughters of the Emperor to be the priestess dedicated to the Shimogamo shrine. The role of Saiō-Dai was to maintain ritual purity and to represent the Emperor at the festival. These days, the role of the Saiō-Dai is played by an unmarried woman in Kyoto who is selected and is dressed in the traditional style of the Heian court. Traditional Heian court dress for women would be wearing twelve layers of exquisitely colored silk robes called jūnihitoe. Even to this day, the female who is selected as the Saiō-Dai must go through several ceremonies of purification before the procession of the festival. Then, she is carried through the procession on a palanquin. 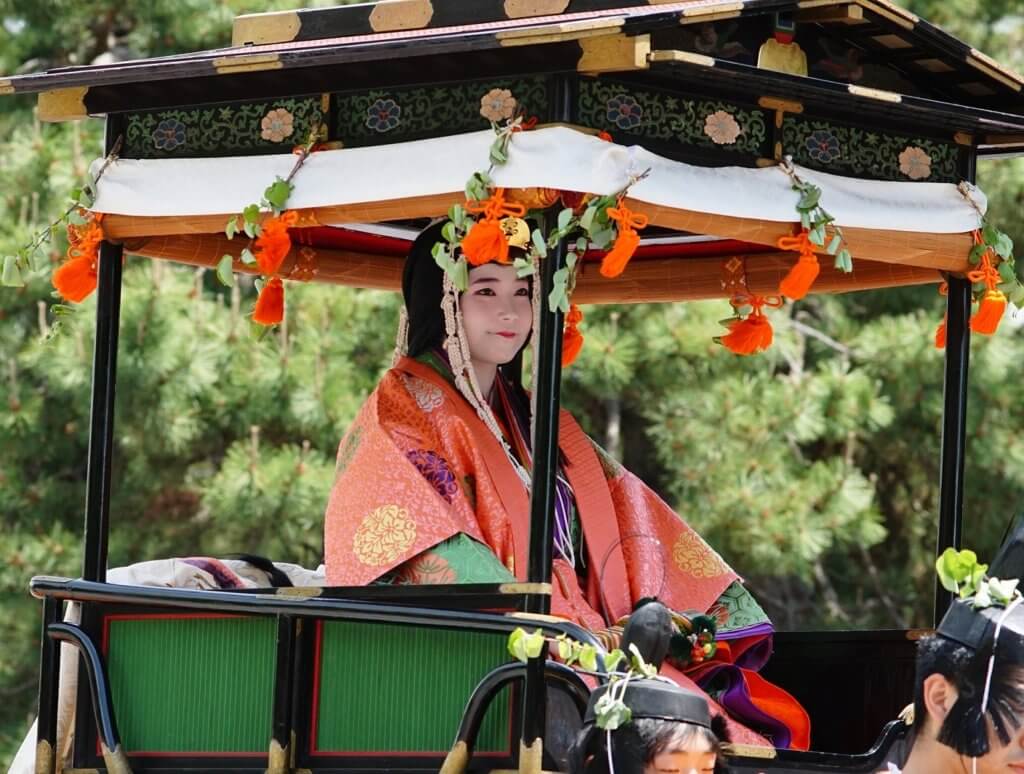 The Imperial Messenger leads the festival procession on horseback. During the Heian period, he would be a Fifth-Rank courtier holding the office of middle or lesser captain and was usually a man aiming for high office. During the Heian period, the Saiō-Dai and the Imperial messenger would be accompanied by 10 dancers and 12 musicians. Today, the procession, complete with ox carts, much resembles the way it looked hundreds of years ago.

The parade begins at 10:30 at the southern gate of the Imperial Palace, and crosses the river in front of Shimogamo Shrine at 11:15. Ceremonies are performed within the shrine for about two hours before the procession departs for Kamigamo Shrine around 2:30, where the head of the parade arrives around 3:30. Watching the entire procession pass by, from beginning to end, takes about an hour.

We went to this year’s Aoi Matsuri! Check out our Facebook live here: