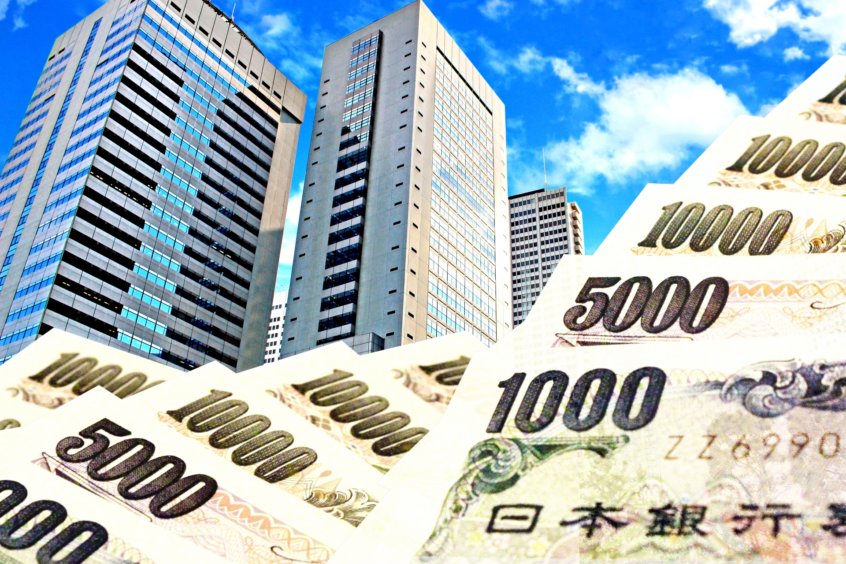 On October 18, 2022, the Tokyo foreign exchange market was trading at around 149 yen to the dollar as the yen sold off on the view that the U.S. will continue to raise interest rates significantly. The yen also temporarily fell against the euro to the mid-146 yen per euro, the weakest level in about 7 years and 10 months.

Against this backdrop, since the deregulation of individual foreign tourists visiting Japan on October 11, there must be many people who would like to travel to Japan. Now is your chance to tour Japan and shop around for the best deals!

As of 2022, Japan is now cashless in many stores, but still relies on cash payments in the countryside and in individual stores. It is dangerous to go shopping or traveling without any cash.
In this blog, we will introduce you to Japanese money (cash) and everything you need to know about Japanese bills, coins, currency exchange, and money etiquette! 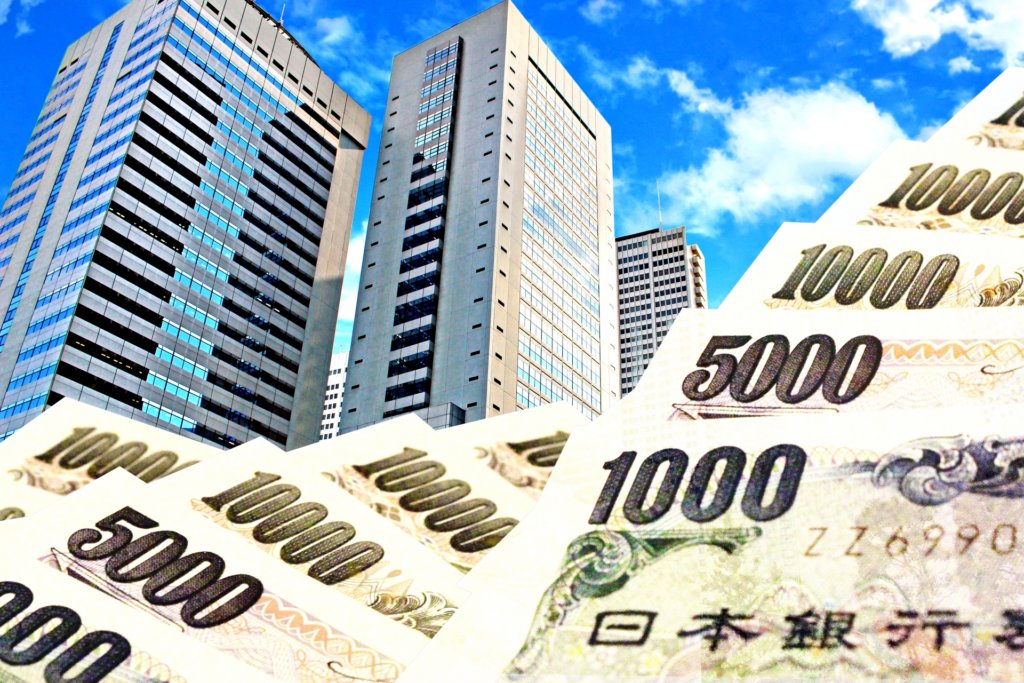 If you are visiting Japan or learning about Japanese culture, it is essential that you have basic knowledge of Japanese currency. Called yen, Japanese money is the third most globally exchanged currency in the foreign currency exchange market, right behind the US Dollar and the Euro.

All Japanese currency – made up of both bills and coins – is known as yen. The word comes from the Japanese word 円:en, which means “round”, referring to the round shape of the coins first used by the Japanese people in ancient times. Unlike the American dollar sign, which is put in front of a money amount (i.e. $100), the Japanese yen symbol is put after the numerical amount (i.e. 1,000円). Continuing the comparison of American dollars to Japanese yen, $1 USD is equal to about 100 yen.

Important note: Although Japanese currency is called yen, when you are speaking in Japanese, you do not pronounce the “y”. For example, 1円 is “ichi en” and 100円 is “hyaku en”. 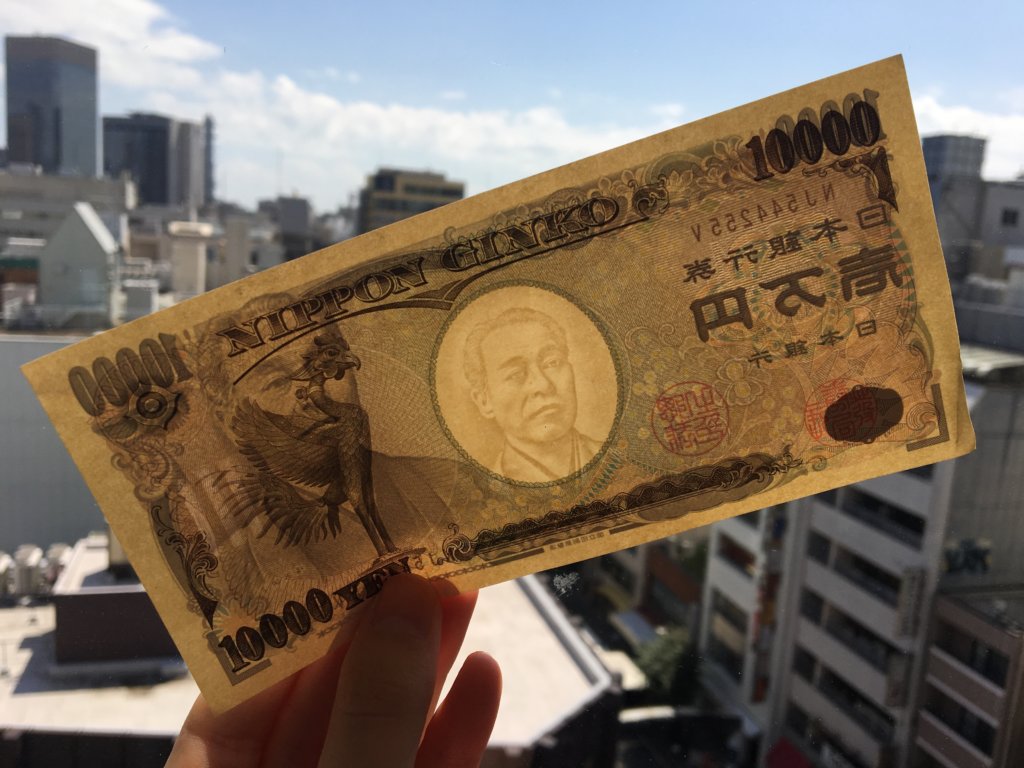 Japanese currency has three different paper bills that are currently being made and kept in circulation. The Japanese word for bill is “Osatsu” (お札). All Japanese bills, from the 1,000-yen to the 10,000-yen bill, have an oval in the center, and this oval, when held up in the light or against a window, shows the face of the person printed on that bill. This is a common method used to ensure that a bill is not counterfeit. On the reverse side, at the top center of every bill, are the words NIPPON GINKO, which mean “Japan Bank”. At once time, a few decades ago, there were other kinds of bills in circulation, including a 100-yen bill and a 500-yen bill, but these have since been discontinued, replaced by coins, and are no longer in circulation.

The 1,000 yen bill is equivalent to around $10 USD, and is currently the lowest value bank note in circulation. The front side of the bill shows a portrait of Hideyo Noguchi, a famous Japanese doctor and bacteriologist. The other side shows a picture of Mount Fuji and cherry blossoms. 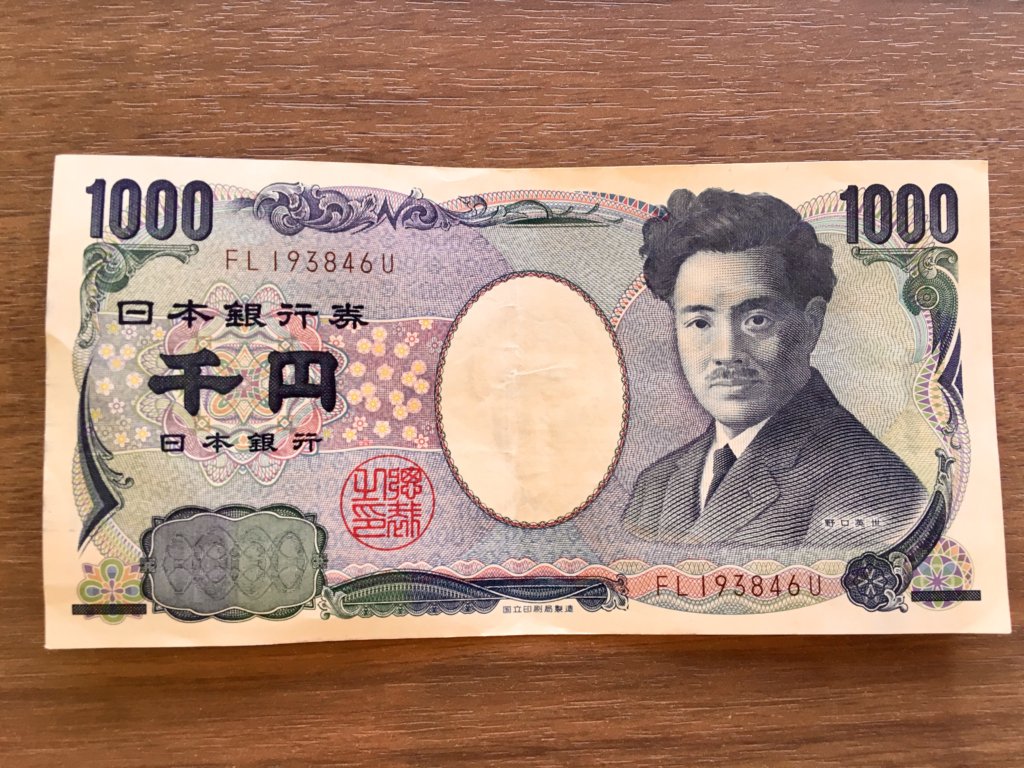 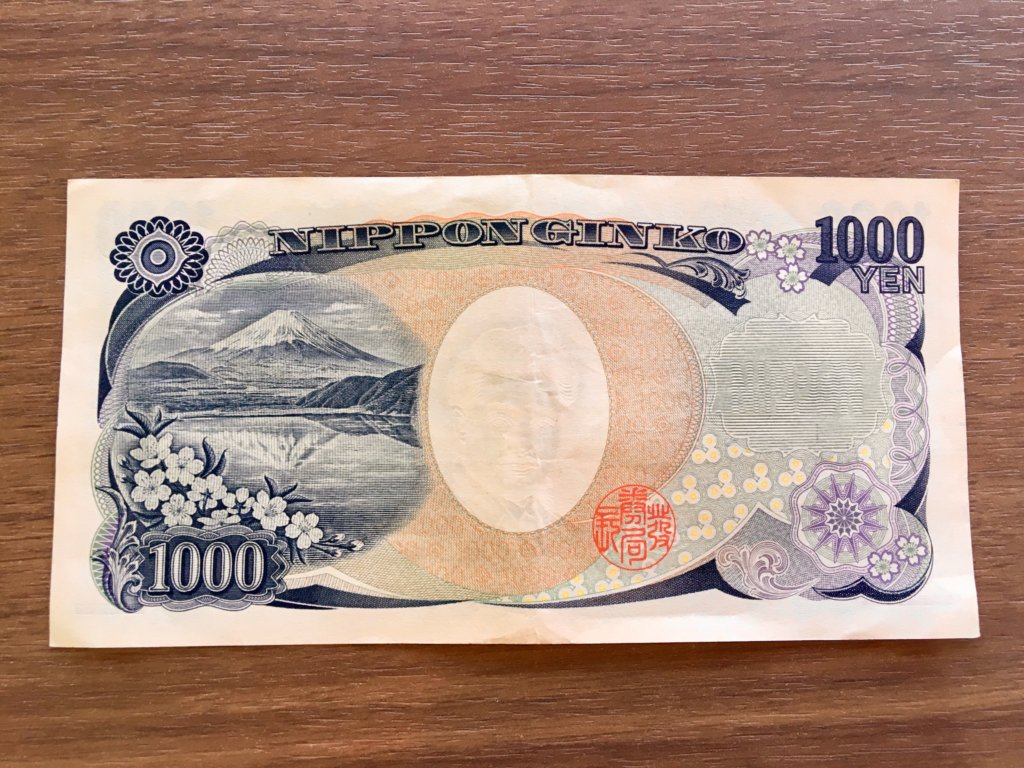 The 5,000 yen bill is equivalent to around $50 USD. The face side of the bill shows a portrait of famous female novelist Ichiyo Higuchi, and the reverse side features a cluster of kakitsubata, or Japanese irises. 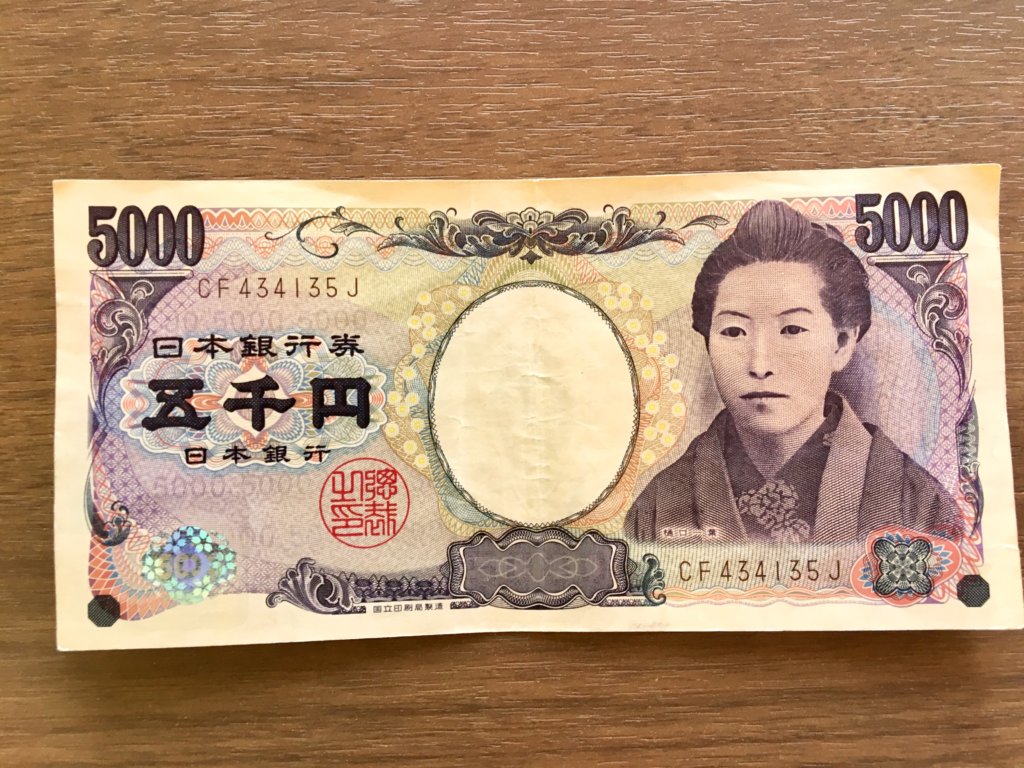 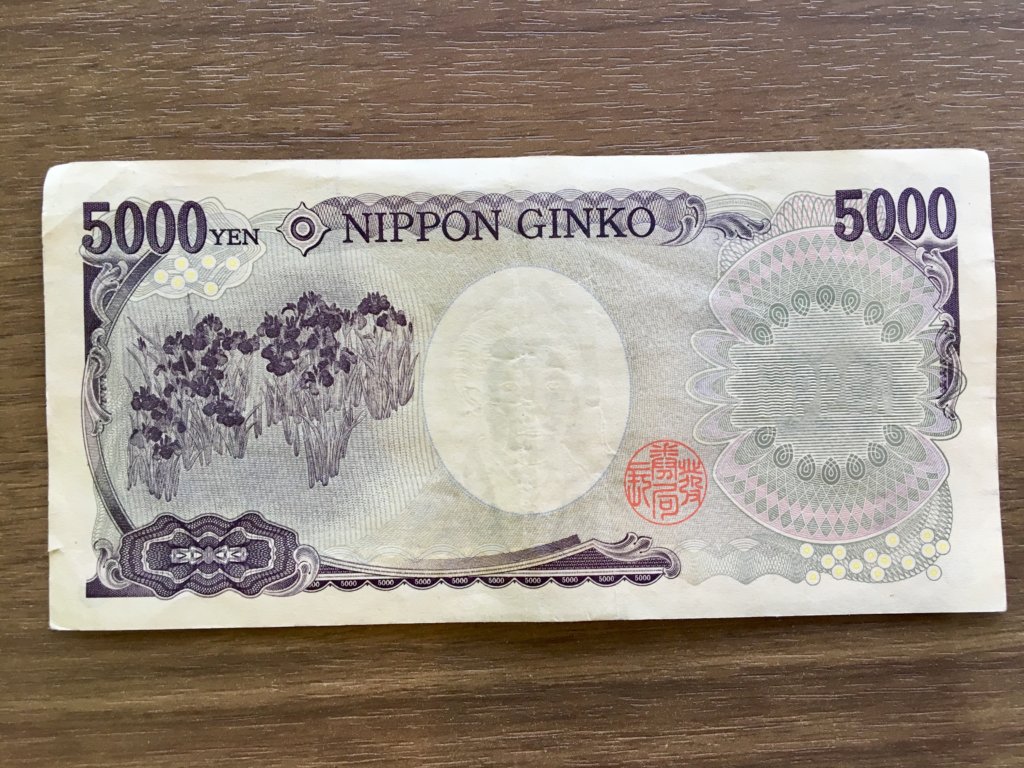 The 10,000 yen, also known as a 1-man(万) bill, is currently the largest bank note in circulation. It is equivalent to about $100 USD. The face side of the bank note includes a portrait of Yukichi Fukuzawa, a Meiji-era philosopher and the founder of the famous Keio University in Tokyo. The reverse side of the bill shows a drawing of the Fenghuang, a Chinese mythological bird that is actually made up of several different animal parts – including the head of a rooster, the wings of a peacock, the scaly stomach of a fish, and the back of a turtle. 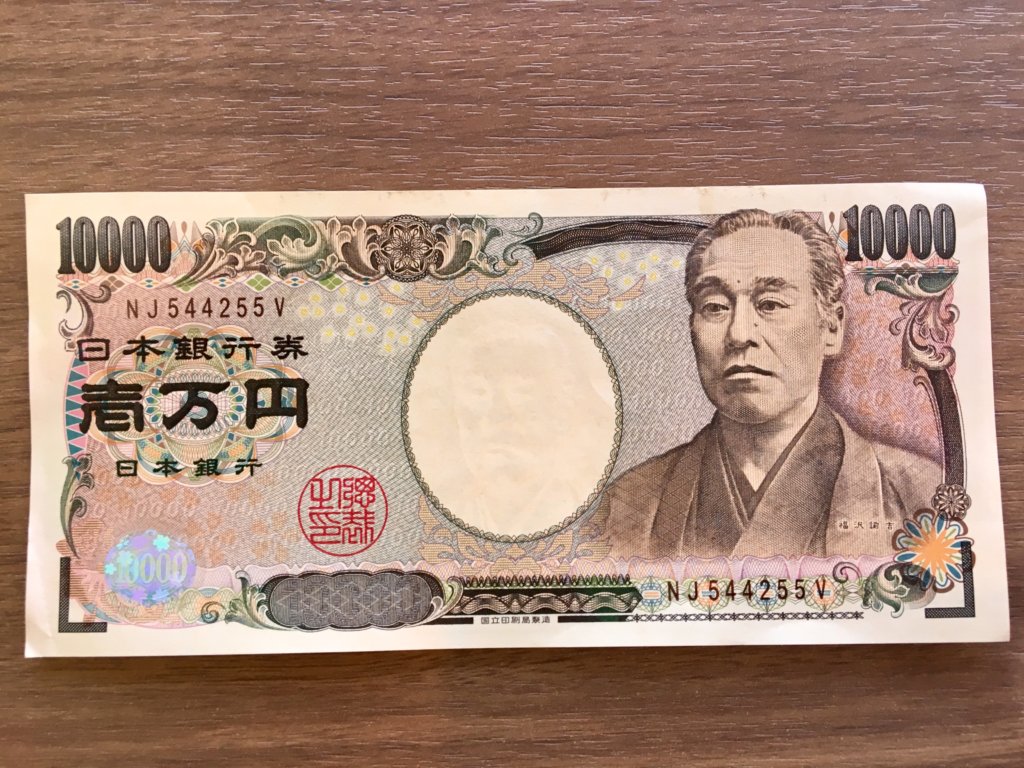 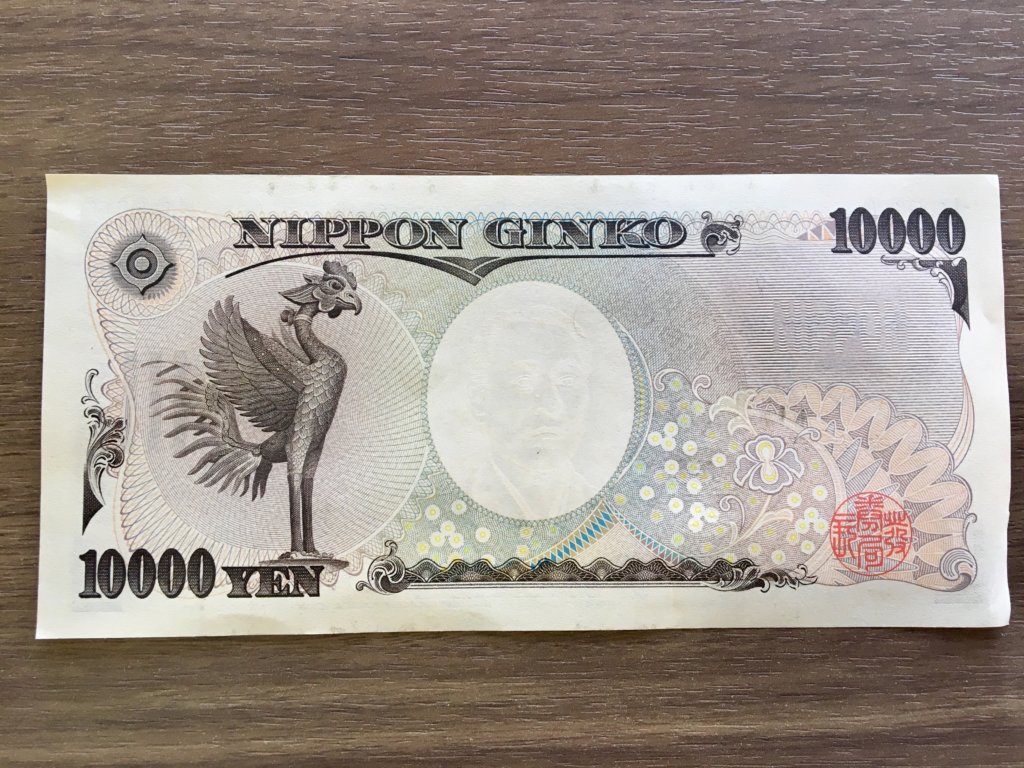 For a brief period from 2000-2003, the 2,000 yen bill was printed and brought into circulation. Although it was only printed for three years before being discontinued, you can sometimes still find this bill today, but only on rare occasions. 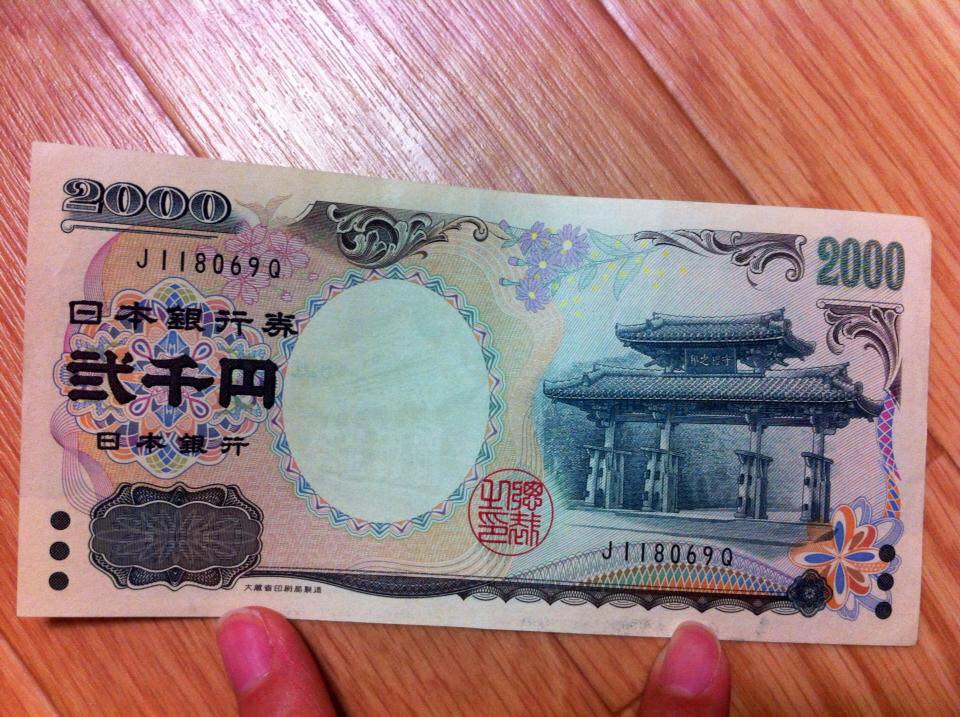 As consistent with the rest of their respectful culture, Japanese people are also very well-mannered when it comes to the handling and care of money. Unlike in some Western countries, where it is perfectly normal to stuff a wad of bills into your pocket or wallet, in Japan, it is frowned upon to fold or crumple money. Therefore, most Japanese bills are quite clean and free of creases or tears. Even still, when giving money as a gift, which is done around the New Year holiday, rather than just giving away the money they have in their wallets, many Japanese people will go to a bank to get fresh, clean bills to present as gifts.

When giving or receiving money, it is customary to do so with both hands. And, after you have received your change, you should gently place the money into your wallet. Be warned: Japanese bills are slightly larger than American bills, so be prepared to bring or buy a bigger wallet to prevent the bills from becoming wrinkled or creased!

Japanese currency currently has 6 types of coins in circulation today. While most Japanese people will understand the word “koin” (pronounced コインin katakana), the Japanese word for coin is “kouka” (硬貨). While the different coins all come in varying shapes and colors, two of the coins, the 50-yen coin and the 5-yen coin, actually have a hole through the center. While modern coins are given holes to make them more easily identifiable by touch, in ancient times, people used to carry around their coins on a string, making the hole in the center quite practical. As Japan is still currently a heavily cash-based society, coins are often used in everyday life, so you will likely be carrying a bunch around!

The 500 yen coin is the largest of all of the Japanese coins. This gold-colored coin is equivalent to about $3.30 USD, so try not to lose it! The coin is made of a bi-metallic combination of nickel, brass, and zinc. The front side shows an easily-legible number 500 and the reverse side shows a picture of a kind of Paulownia tree, which are present in many Asian countries. 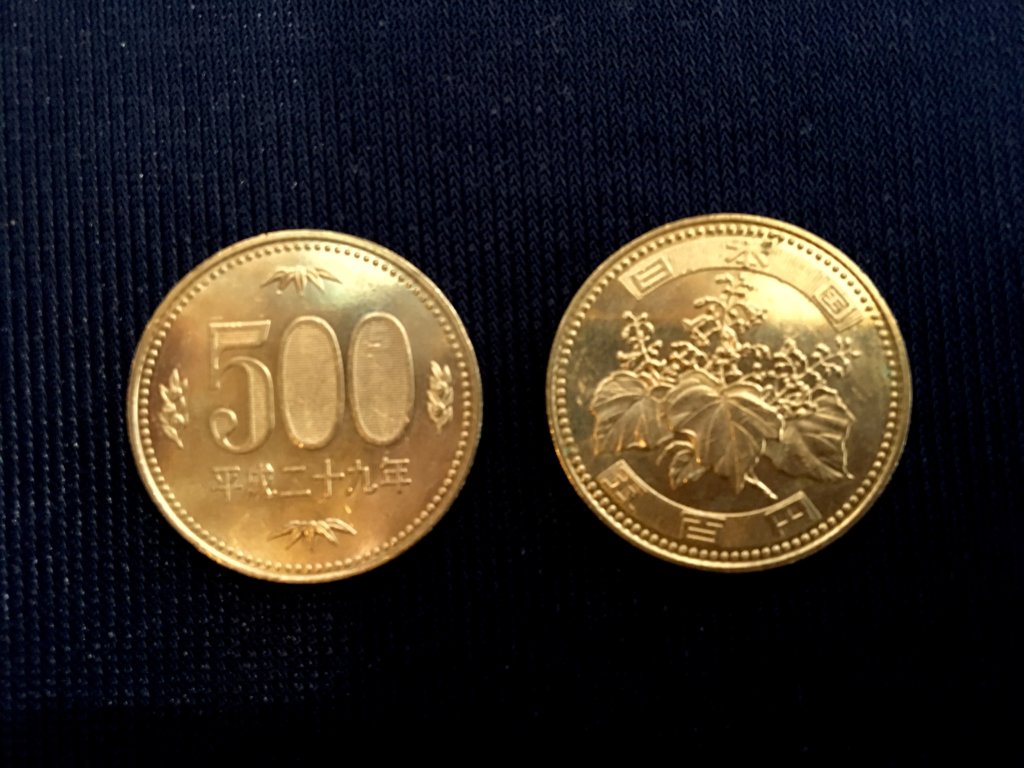 The 100 yen coin is a silver-colored coin made of copper and nickel, and it is equivalent to about $0.67 USD. This coin is commonly used at 100-yen stores, vending machines, and coin-operated laundry machines. The front side shows a large number 100, and the back side features an image of cherry blossoms (sakura), which are the national flower of Japan. 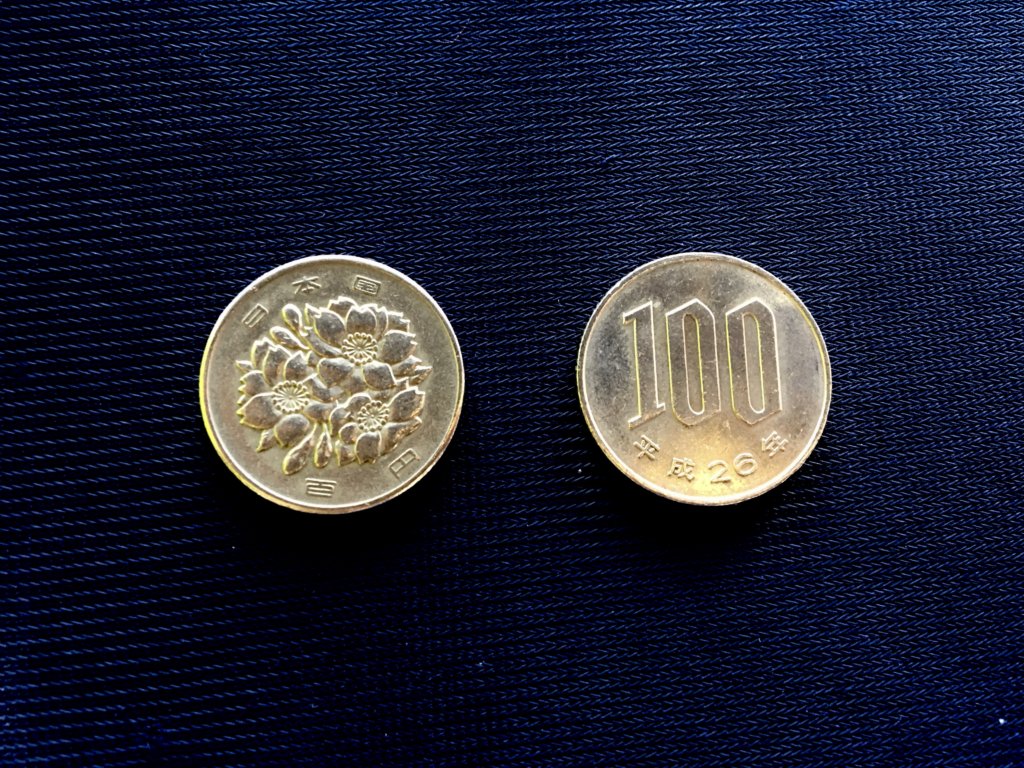 Other than the large number 50 printed on the front side, this coin can be identified from its silver color and the hole through the center. On the reverse side, you can find an image of the chrysanthemum flower. It is equivalent to about 34 cents (USD). 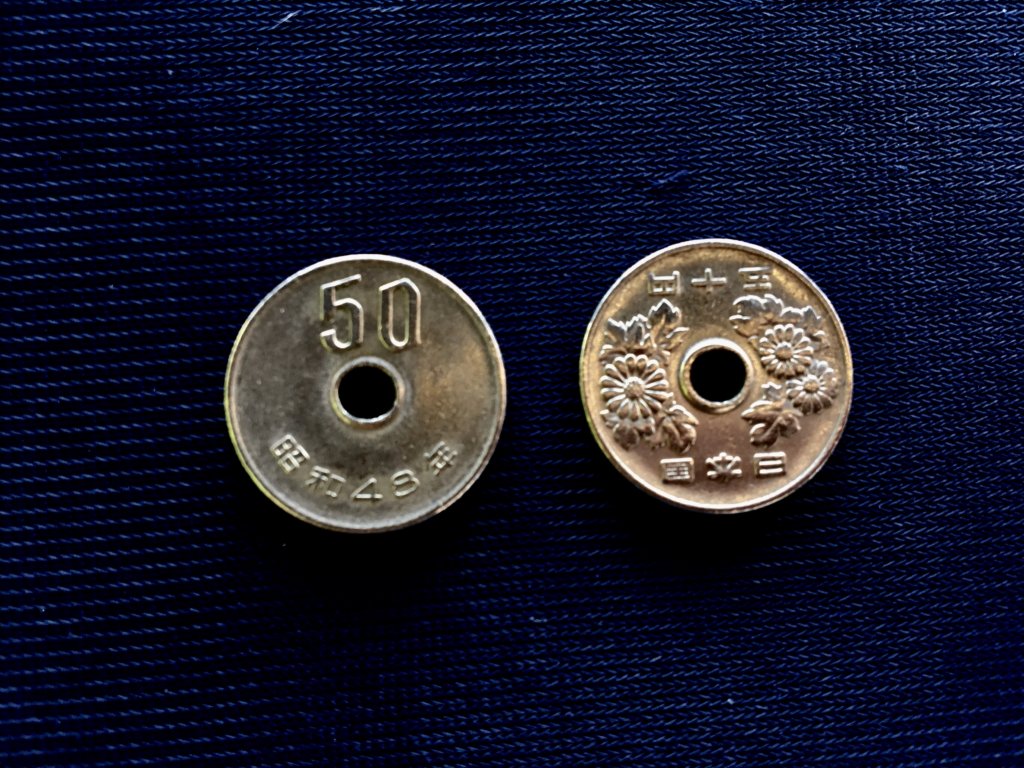 The 10 yen coin is a copper coin equivalent to about 7 cents (USD). The front side shows a large number 10 positioned above a crescent of bay laurel leaves, while the reverse side features an engraving of the famous Phoenix Hall of the Byodo-in Buddhist temple in Kyoto. 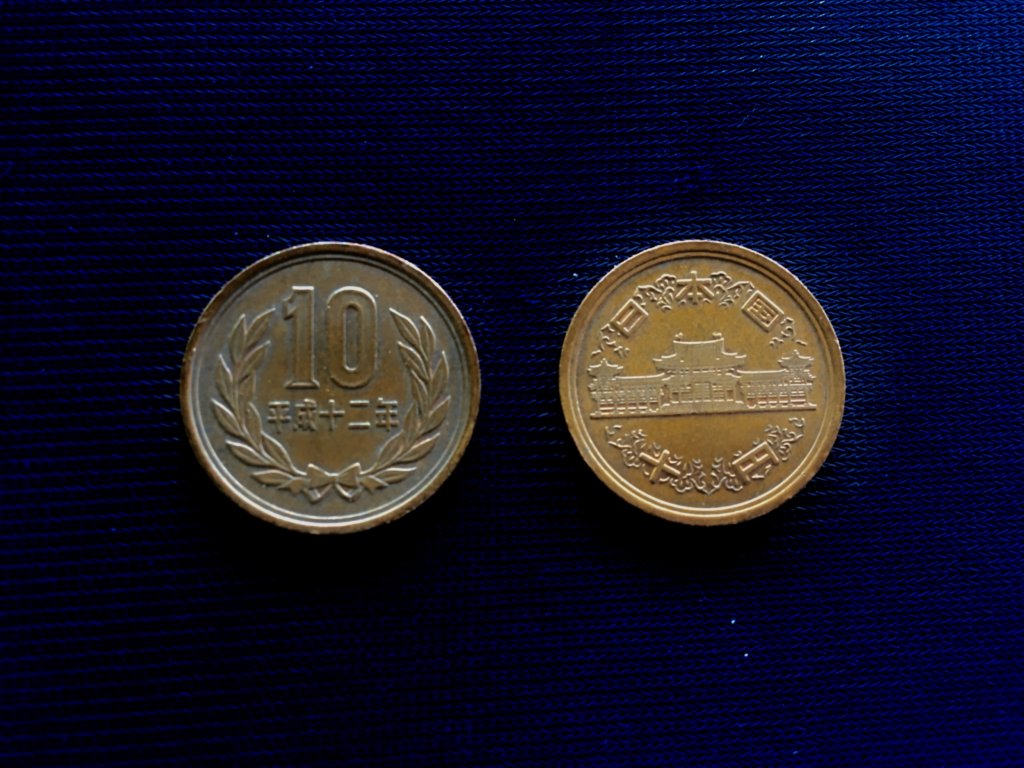 The 5 yen coin is easily identifiable by its yellowish tint and the hole through its center. Unlike all of the other Japanese coins, which have their numerical value printed in Arabic numerals, the front of the 5yen coin actually has its economic value shown in Japanese kanji. Equivalent to about 3 cents (USD), this coin is commonly known as being a lucky coin in Japan! This is because “5 yen” is pronounced “go-en” in Japanese, which is the same word for ご縁, meaning relationship, or tie. When you give this coin as an offering at a shrine, you can expect a good relationship and connection with the gods. 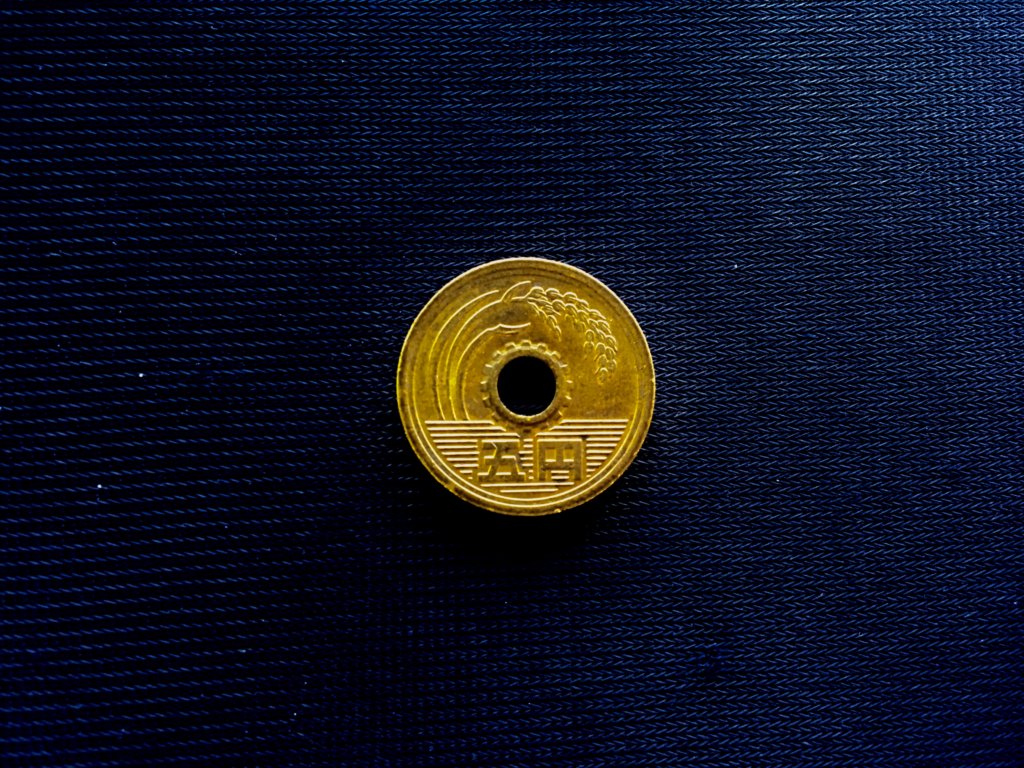 Equivalent to less than 1 cent (USD), the 1 yen coin is the coin with the lowest currency value of all of the Japanese coins. Made of aluminum, this small coin is so lightweight that it actually floats on water! While perfectly good for making exact change in stores, the 1yen coin is often not accepted by vending machines, ticket machines, bus fares, and electronic ticket booths, so keep that in mind when using up your spare change! The front side of this coin shows an encircled number 1, while the back shows an image of a young branch of an unspecified tree. 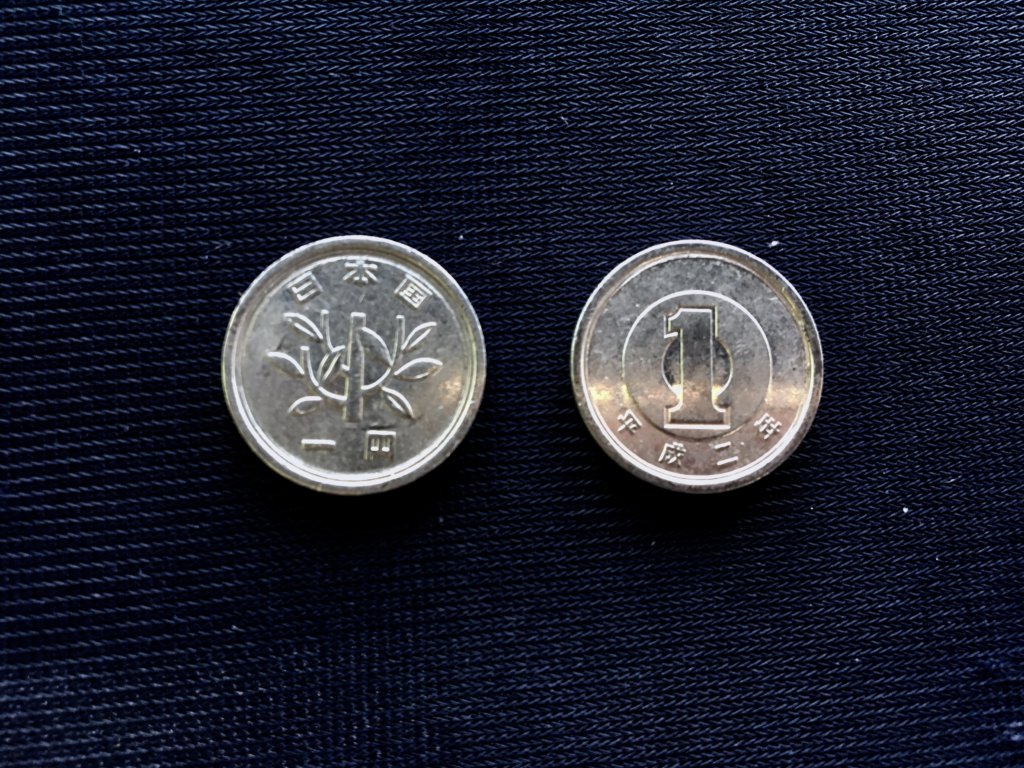 As previously mentioned, Japan is a heavily cash-based society, so if you come to Japan, it is wise to carry a fair amount of cash with you at all times. While these days, many places are starting to accept credit cards, as you leave the city and go out further out into the Japanese countryside, stores and establishments are more frequently “cash only”.

Exchanging your money into Japanese yen is fairly simple, as it can be done at most, if not all, Japanese airports. In heavily-populated cities, there are typically a number of locations where you can exchange currency to get Japanese yen. Some larger, tourist-oriented souvenir goods stores such as Don Quixote, have currency exchange machines. As expected, as you leave the cities and move further out into the countryside, it becomes more difficult to find places where you can exchange money into Japanese yen, so it is a good idea to do that first in the airport or while you are still in a large city. Of course, many convenience stores, such as Seven Eleven, have ATMs that accept international credit cards, so that is another way to withdraw money as Japanese yen. 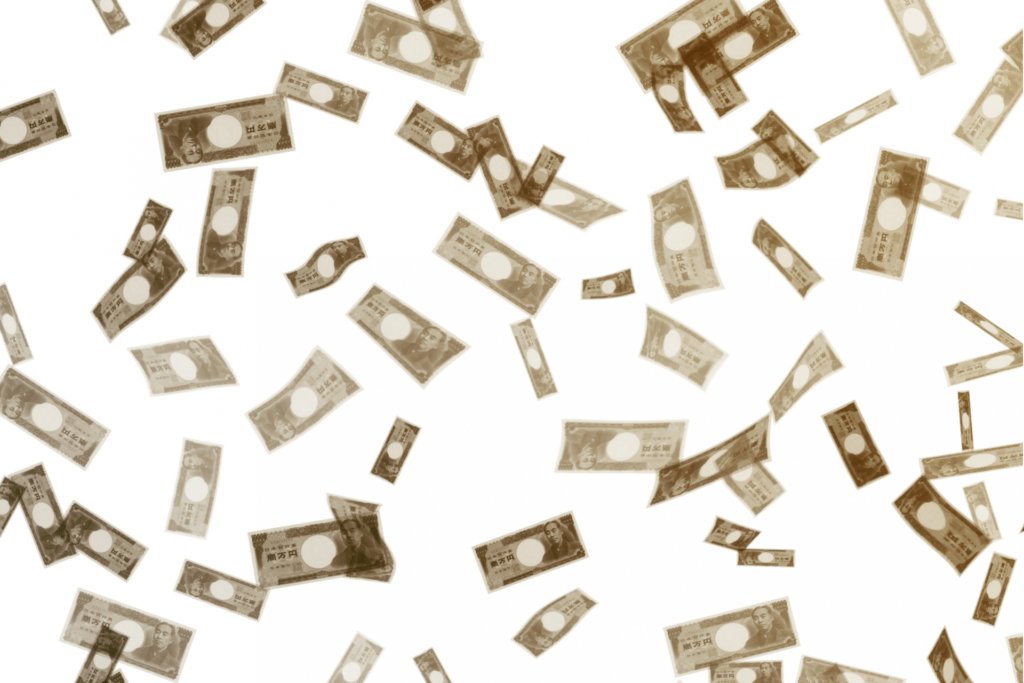 We went live on Facebook and answered all your questions about Japanese money! To watch that live stream, click this video below. (in 2019)