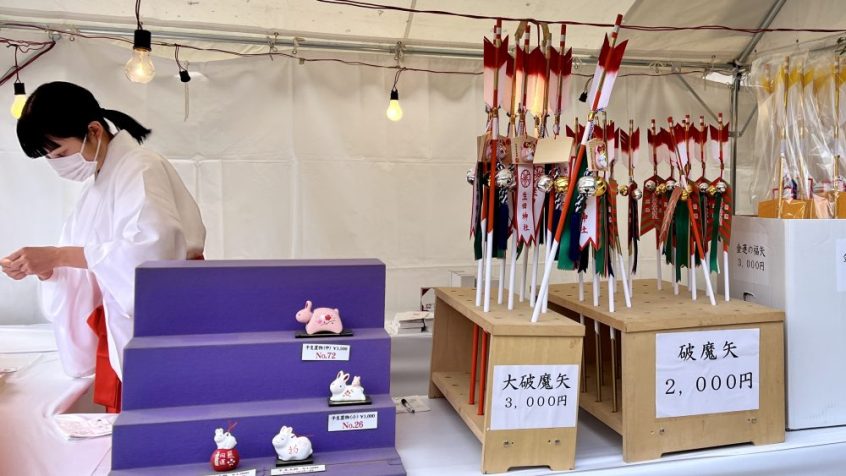 Have you ever heard of HAMAYA? Many Japanese people buy this arrow-shaped lucky charm when they go to Hatsumōde 初詣 (New Year’s shrine or temple visit). The “Hamaya” is a popular item for Hatsumōde (New Year’s visit to shrines temples). Learn the legend behind it and have a happy New Year. 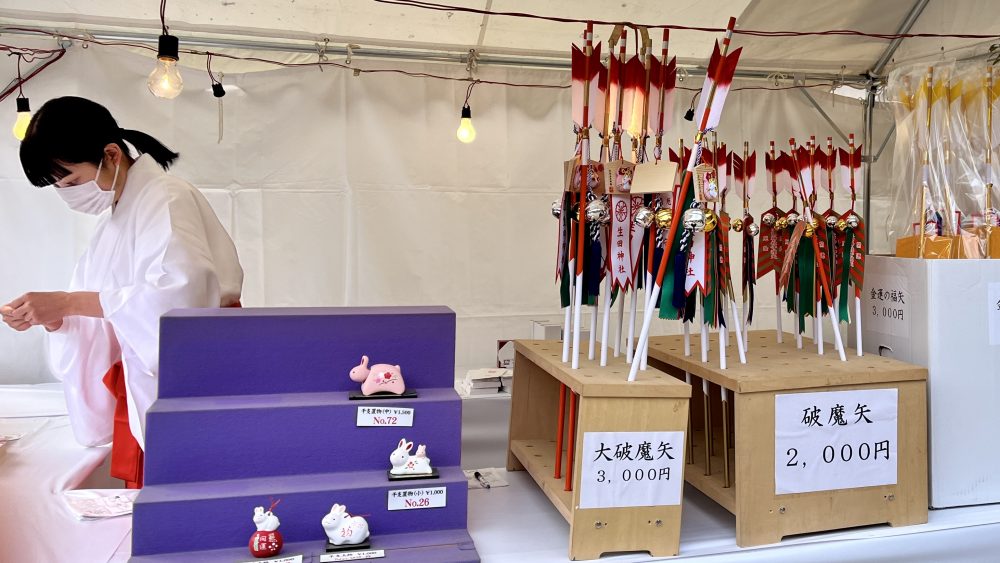 The Kanji for Hamaya is 破魔矢 (destroy-demon-arrow). Hamaya are arrows used to ward off evil spirits, and the bow used to shoot them is called a Hamayumi 破魔弓. They are sold at shrines and temples as a lucky charm for the New Year, but they are also used to mark the ridgepole-raising ceremony of a newly built house.

Originally, bows and arrows were weapons, but they were also believed to have the power to exorcise evil spirits. The oldest of these rituals called Hamauchi 破魔打,” had been held on New Year’s Day divination.

In this ritual, a target about 1 meter in diameter made of straw rope is thrown in front of children holding bows and arrows, and the children are asked to shoot through the center of the target. It is said that the bow and arrow were brought back as a charm for children’s growth, and that this was the beginning of Hamaya or broken arrow as a good-luck charm.

The reason why the tip of the daggers are not sharp is that they are not used to shoot people or objects, but rather to purge evil spirits.

How to decorate and place the Hamaya?

【Location】
The awarded arrows are displayed on the altar, in the tokonoma (alcove), at the entrance, or in the living room. 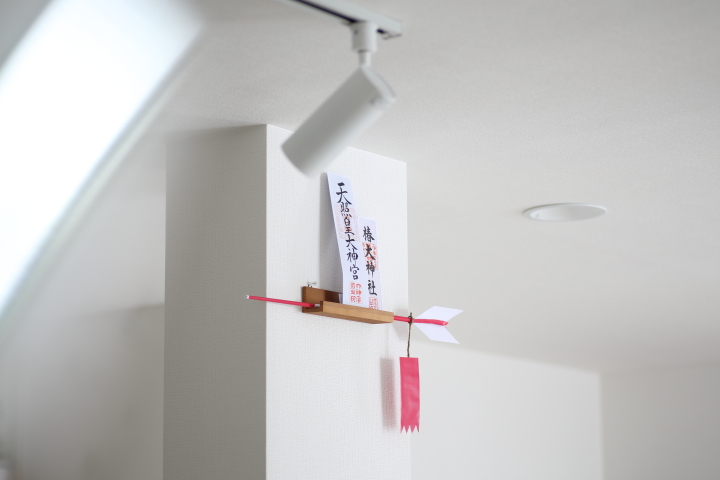 Here are the opposite directions (unlucky direction) for each zodiac year. This means that each year, the arrow of the Hamaya must point in that direction.

How to dispose of a Hamaya

The Haimaya is a good-luck charm for the purchased year only, and it should be returned to the shrine or temple that gave it to you the following year. Please look for Nōsatsusho 納札所, and return your old Hamaya and other lucky charms like amulets. Old amulets and other lucky charm items brought here will be burned at a later date. In Japanese, we call it Otakiage お焚き上げ. Oyakiage is a religious ceremony in which offerings are made at shrines or temples and then burnt and returned to heaven. 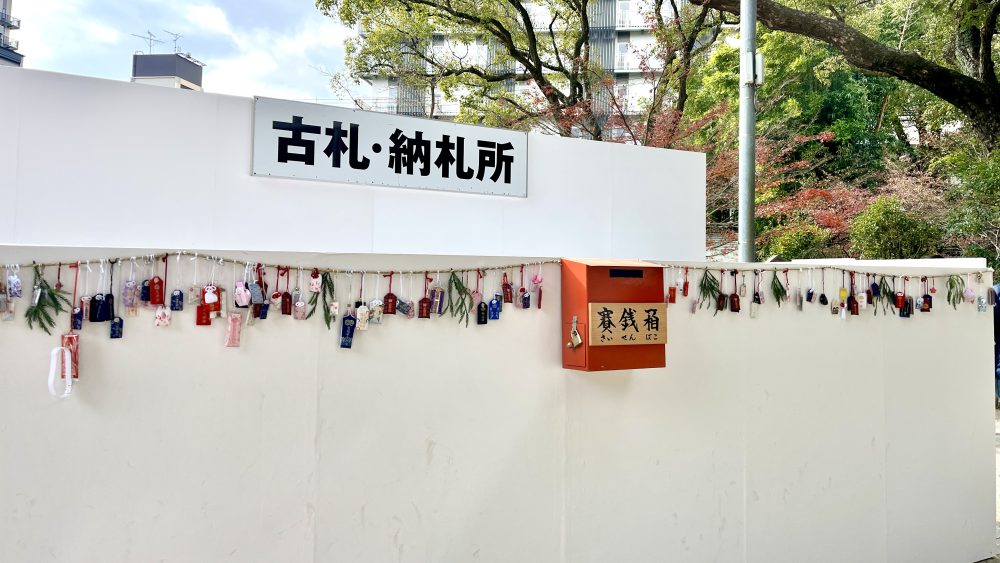 Many shrines hold the Otakiage ceremony called Dondoyaki on January 15, so you have until that day to return the amulet, but rest assured that the temple will accept it all year round.

January is a month of lively festivals such as Hatsumōde and Tōkaebisu festival in Japan, and it seems that many travelers want to purchase Hamaya and Omamori (good luck charms). The problem, however, is how to dispose of them. It is best to return them when you return to Japan the following year, but if this is difficult, you can dispose of the amulets yourself. 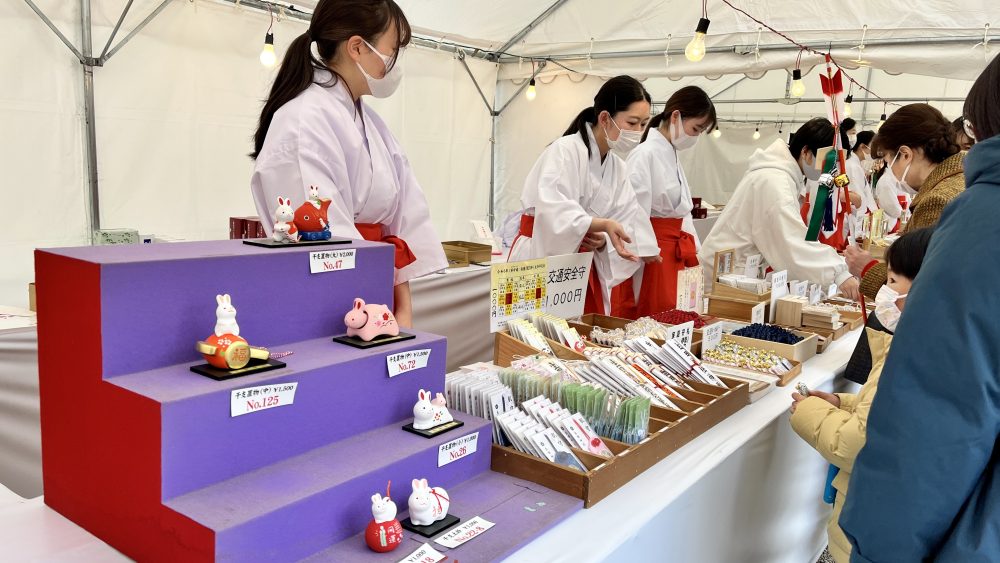 The important thing is to feel gratitude for the amulet.