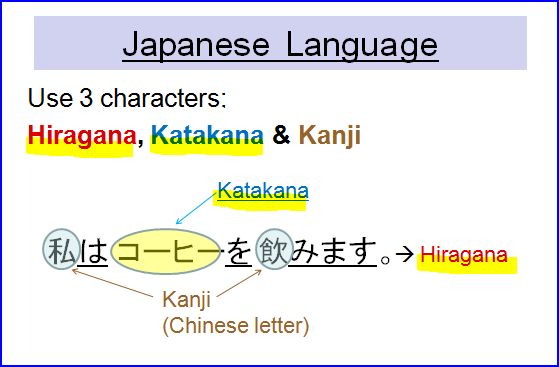 There are three types of Japanese letters: Hiragana, Katakana and Kanji.
In this section, the history and the role of each Japanese script are introduced. 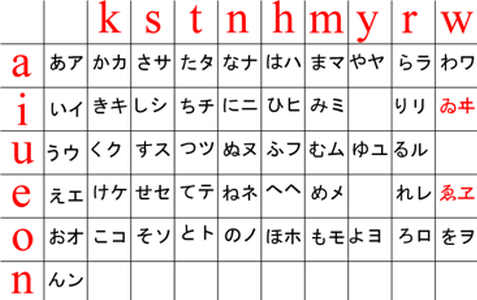 Japanese Kanji came from China in the 5th to the 6th centuries. Then later Hiragana and Katakana evolved to represent “readings” in Japanese.

Besides these three letters, Japanese uses “rōmaji”, which is English alphabet but it is used to show only pronunciation and not considered as Japanese letters.
Hiragana – ひらがな Japanese is a syllable-timed language while English is stress-timed. That means, you can understand how to read any Japanese words once you know how to pronounce each Hiragana character and some pronunciation rules. On the other hand for English, you need to know the spelling as well as the pronunciation. We never know how to pronounce an English word such as “photo” by just knowing how to read alphabet: a,b,c… Japanese pronunciation rule is very systematic, thus, once you know it, it’s much easier for you to study Japanese and get more advanced.
Katakana – カタカナ Basically, Katakana and Hiragana charts are correspondent to each other. There are 46 basic Katakana, 25 Daku-on, 33 contracted sounds and some special combinations of Katakana to describe foreign words. For example, TV (terebi) and radio (rajio). In casual writing, Katakana is used when the meaning is emphasized (you’ll see many Katakana in comics). Also, katakana is used for a variety of “onomatopoeia – sounds and emotional word” in Japanese. (e.g. “doki-doki” to represent a fast heart beat)
Kanji – 漢字 Japanese Kanji has about 15,000 characters used in modern Japanese, out of over 50,000 that exists as Chinese. However, not all of Japanese can write and understand all of 15,000 kanji. Only 2,136 Kanji characters are defined as Jōyō Kanji (everyday use Kanji) by Ministry of Education. Japanese Kanji are generally used in names of places and people, or used as technical terms in historical or medical books. There are not too many characters used in general documents. So not to worry too much! Let’s take a look how Hiragana, Katakana and Kanji are used in a sentence. 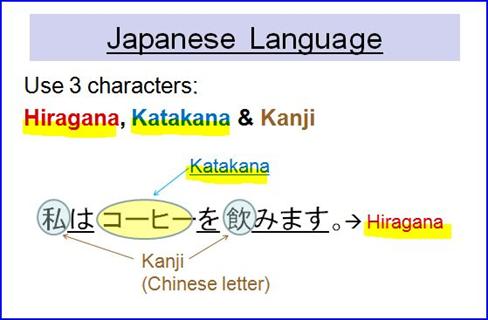 The sentence says: Watashi wa koohii o nomimasu – I drink coffee. Since Coffee is a foreign word, it’s written in Katakana. 私 means “I” and reads watashi, and 飲 means “drink” and reads no. Actually, all Japanese writing can be written in Hiragana or Katakana only, however, Japanese still use these 3 letters. It may sound confusing but this way is very useful after all!

Interested in learning Japanese? Check out my Online Course!
This course includes Japanese script lessons: Hiragana, Katakana and Kanji with step-by-step video tutorials and complete workbooks, and much more! ~from basic Japanese to JLPT intermediate level of Japanese.