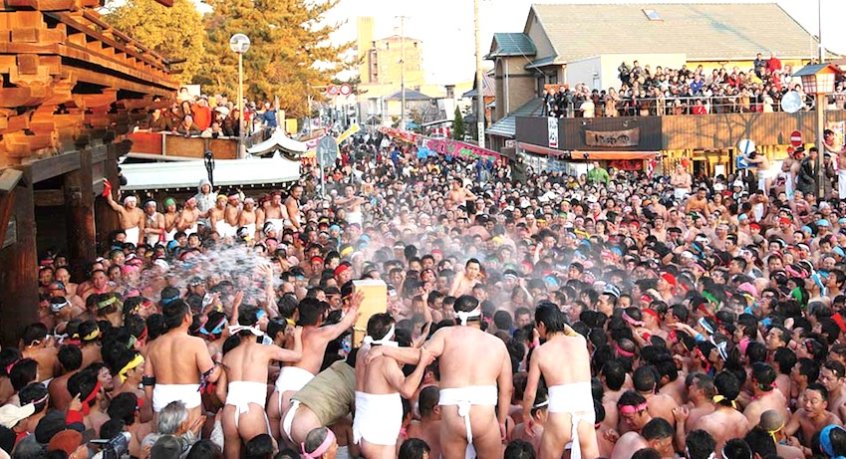 Japan’s matsuri (祭り) festivals are an incredibly important part of traditional Japanese culture. Matsuri are typically dedicated to Shinto Shrines and their divine deities, and because there are over 8,000 different recognized deities, matsuri come in all shapes and sizes! Some matsuri are very quiet, intimate affairs, while other matsuri are notoriously lively and high-energy. Here is our list of some of the most unique, rare, and just unusual matsuri you can find in Japan.

This “cussing festival” is quite a rare and unique festival. 13 tengu (long-nosed goblins) wearing white clothes walk through the 16 shrines and offer gifts. In the mean time, people hurl vicious language at the Tengus, cussing and  saying things like “Bakayarou!”, “Walk quickly!”, and much more brutal Japanese. When the Tengu reach one of the shrines to present their offerings, the crowds of towns people push and fight to try to steal the offerings. It is said that people who are able to steal the offerings will find happiness.

When: The 3rd Sunday of December

This unique festival is dedicated to fertility. The main attraction is the famous procession is led by Shinto priests who sprinkle salt along the route for purification, followed by flag bearers, and then, the famous event: about 60 men, all aged 42 (which is declared as the unlucky age for men) – are dressed in colorful traditional festival costumes, and work in teams of 12 to carry the huge male-genitilia sculpture that’s stuck in a portable shrine. The sculpture has grown gradually larger in its years of tradition, starting from a humble-sized figure attached to a straw man, eventually becoming the enormous 2.5 meter carving seen today. In fact, checking if its bigger than the previous year is one of the activities that keep attracting lots of people to the festival!

Held every year in early July, Kinpusen-ji Temple’s Kaerutobi Matsuri (literally “Frog Hopping Festival”) is incredibly unique. Like many other matsuri across Japan, there are drumming performances and portable mikoshi shrines, however, the main ceremony involves men dressed in frog suits “hopping” to the temple to receive healing from priestly incantations. It is said to have originated from a symbolic story in Zao Buddhism.

Owase Shrine’s famous festival is sometimes called a ‘Hadaka Matsuri (Naked Festival)’, but usually is known as the ‘Yaaya Matsuri’ due to the shouting of the young festival participants. It is a festival in which crowds of men dressed in white hold lanterns while they collide violently in narrow streets. Throughout the night, the event is accompanied by the sounds of taiko drums and flute music played by other townspeople. Afterwards, the men hurl themselves into the cold water of the Owase Bay in order to cleanse themselves. It is a very lively and unique festival, and it is supposed to pray for a good harvest.

Among the festivals in western Japan, this wildly bizzare “Onda Festival” is actually known as the first odd festival in Japan. Every year on the first Sunday of February, many people gather to watch the rice planting ceremony. The ceremony begins quite normally – with prayers to the Shinto deities for a bountiful harvest, however it famously escalates very quickly, as the main part of the ceremony is a vivid intimate scene enacted by a “Tengu” goblin and a human woman—but both roles are played by men! The Niimasu Shrine is also associated with fertility and many couples visit to pray for safe childbirth and healthy children. In the precincts of the shrine, there are many rocks that naturally resemble male and female genitals.

When: First Sunday of February

In this lively fire festival that dates back 1500 years, participants light a giant bonfire and gather around it in a circle. Five people are chosen to play the role of demons, which they do one at a time by wearing a mask and carrying a long, flaming stick. The demon then chases people in circles around the bonfire, and it is said that if you get hit by the stick, then you will become so miserable that you will not get sick for an entire year.

When: A Sunday in October

This liquor drinking festival is widely known as being one of the most unusual festivals in all of Japan. It is said to have originated when villagers prayed for drinking and pregnant women when the area was struck by a famine over 300 years ago. The most famous part of this festival is when dozens of 25-year-old men dressed only in loincloths run barefoot across the temple grounds, receive blessed wine from priests, and use wooden spoons to carry the wine and serve it to onlookers. It is a very exciting and entertaining festival that continues to get more and more lively as more wine is consumed.

Young men dressed as ogres wear shogun costumes and carry paddles, imitation kitchen knives, and cylinders made of bamboo. They visit houses and try to scare young children and infants by shouting “Amamee”, and the children are supposed to respond by promosing to be well-behaved. It is a tradition to exorcise the house of disaster, expel laziness, and bring happiness.

This “Bamboo Smashing Festival” is a festival that dates back 1300 years, and is based on the Legend of the Orochiman killer. Young people who are half-dressed in white clothes gather in the temple halls and grounds and smash poles of bamboo by throwing them into the ground. They also throw a large rope that is supposed to represent a serpent into the river. People take home the broken bamboo shards and use them to make chopsticks, which is supposed to bless the family with health.

This is a festival of fire boasting a tradition of 500 years. The word oni means “demon” while hashiri means “run”. The main event is held in the Dadado Hall of Nenbutsu-ji Temple. Father demons, mother demons, and even children demons in masks carry large flaming barrels around the hall in a hellish scene that is meant to protect the residents from disaster. Designated as an important intangible folk cultural property of the country, it is held on the evening of January 14 every year.