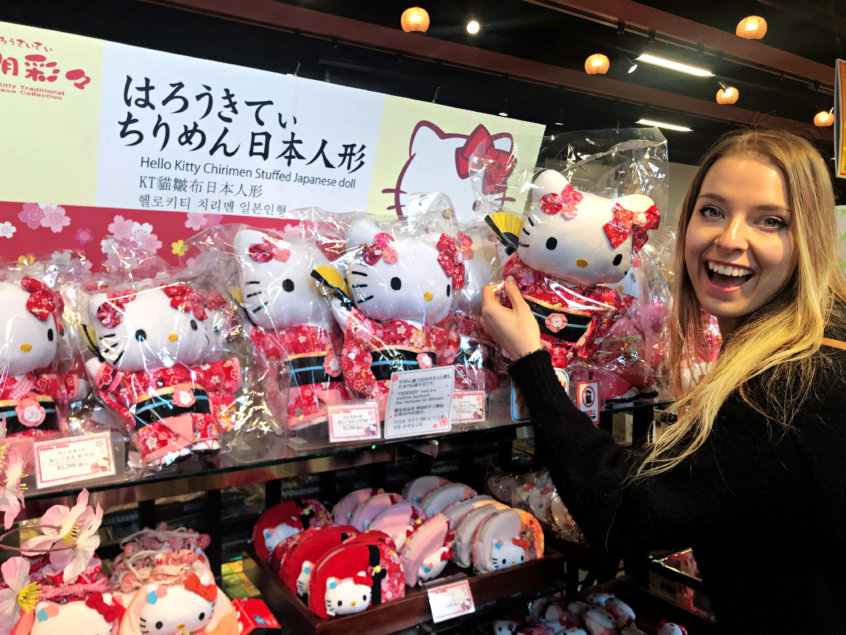 If you could take a trip to Japan and bring anything back to your home country, what would you want to buy? Here is a list of the top 10 most popular souvenirs that foreign tourists seek out when they visit Japan.

In recent years, the demand for Japanese snacks and sweets has surged worldwide. The most popular treats like Pocky and Pretz are even available in many super markets all across the globe. However, these two names are just the beginning, and actually visiting Japan will take you to an entire new level, as Japan is a literal snacks and sweets paradise.

As to where in Japan to hunt for a variety of these goodies, you can find the best selection with the lowest prices at supermarkets or Don Quixote, where there are aisle after aisle dedicated to every kind of chip, chocolate, cracker, cake, corn puff, etc. you could ever want. Japan is crazy about new, limited-edition flavors, too, so you never know what you’ll find!

Many places in Japan also have their own specialty product that they incorporate their souvenirs – like green tea in Kyoto, or purple sweet potato in Okinawa – so be sure to look up the specialty of the area you’re visiting and get it in souvenir form before you return home. 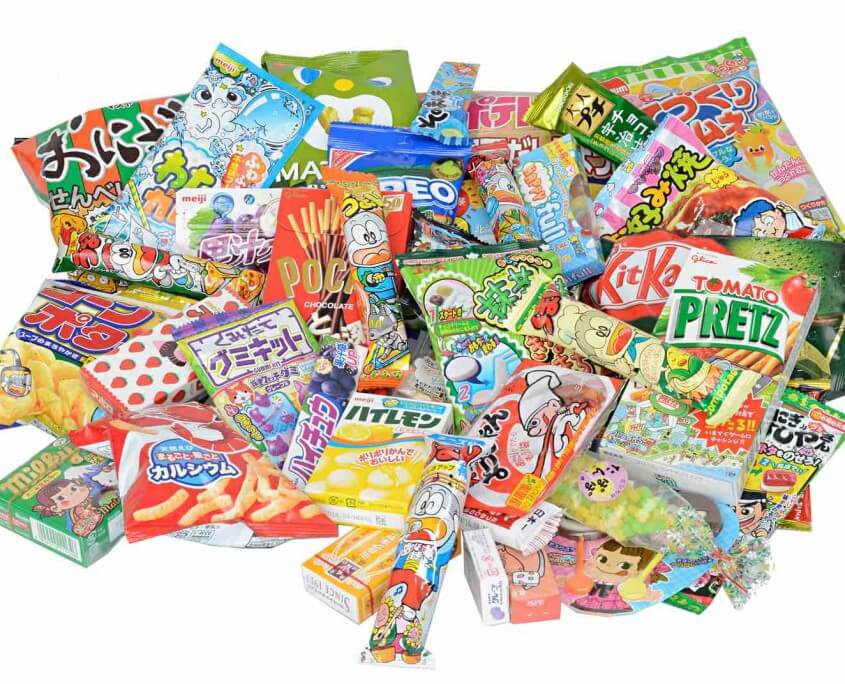 Far back in Japanese history, Japanese hand fans were used by aristocrats and the samurai class to signify social standing and even communicate messages. By the 15th century, Japanese hand fans were so widely coveted that Japan started to export them abroad. By the 18th and 19th centuries, these fans had even become a trendy fashion accessory for wealthy European women. Today, traditional fans are still one of the most highly sought-over souvenirs for foreign tourists visiting Japan. The two most common types you’ll come across in Japan are uchiwa and sensu.

Sensu are more lavishly-decorated folding fans. The original sensu were made from bamboo covered with Japanese washi paper. Today, they are typically made of paper, sandalwood, or silk, but cloth/cotton ones exist as well. Sensu fans make great souvenirs, as they’re compact, beautiful and practical. They come in a wide range of prices – from the 300yen fans at dollar stores, to the 1500yen fans in shopping districts, and even 10,000yen fans sold at high-end, specialty shops.

A tenugui (手拭い) is a thin Japanese hand towel made of cotton. They are typically about 35 by 90 centimeters in size, and come in an incredible variety of colors and patterns. Many Japanese people, especially women, carry them around at all times, but they make for a simple and practical souvenir as well! Tenugui can be used for anything a towel could be used for – as a hand towel, washcloth, or dishcloth, but also as a fashionable headband or bandana. Even so, many foreign tourists buy them simply for their great decorative potential. They are very affordable as well! 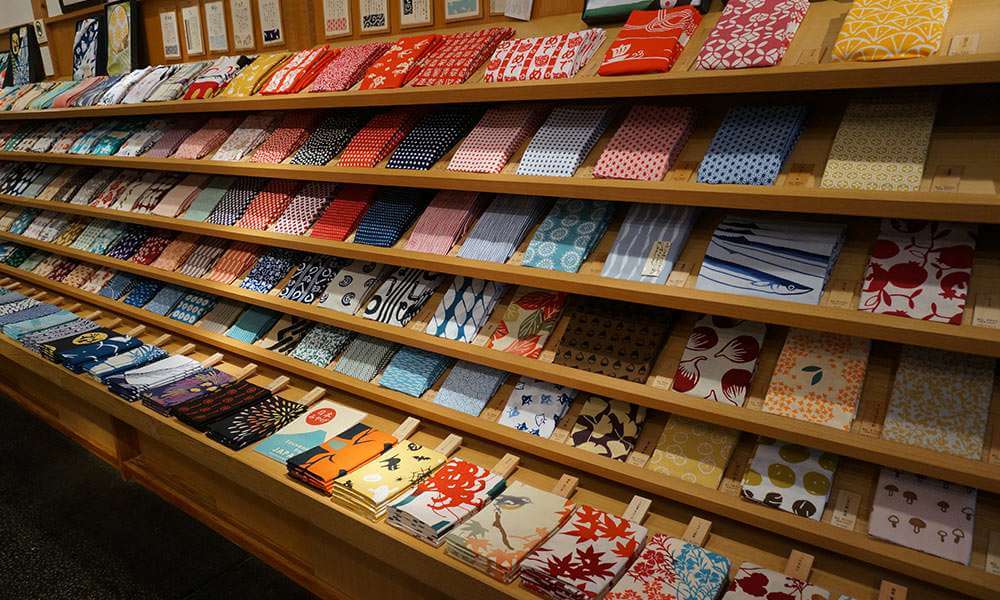 Chopsticks, called ohashi (お箸) in Japanese, are arguably the most popular souvenir for foreign tourists visiting Japan. Japanese people have been using chopsticks since the Yayoi Era around 2000 years ago, and they are still the go-to utensil in Japan today, so the variety of chopsticks and chopstick-related goods on the market is astounding. When you go to Japan, why not pick out a pair or two of your very own chopsticks to use back in your home country? Chopsticks come in all shapes and sizes, as well as price ranges. Whether you want several colorful pairs for you and your friends/family, or one hand-crafted decorative pair, Japan is the perfect place to buy a good pair of chopsticks.

Kendama is a simple ball-and-string toy that came to Japan in the 1700s and remains popular with Japanese children to this day. Nowadays, the wooden toys are also popular worldwide, as there are even official kendama associations and competitions around the world. Kendama come in a lot of different designs and are a good classic souvenir for people who like toys, stocking-stuffers, knick-knacks or art. You can find kendama toys in many different stores all over Japan – in shopping streets, toy stores, variety goods stores, and even smaller stores selling traditional Japanese goods. 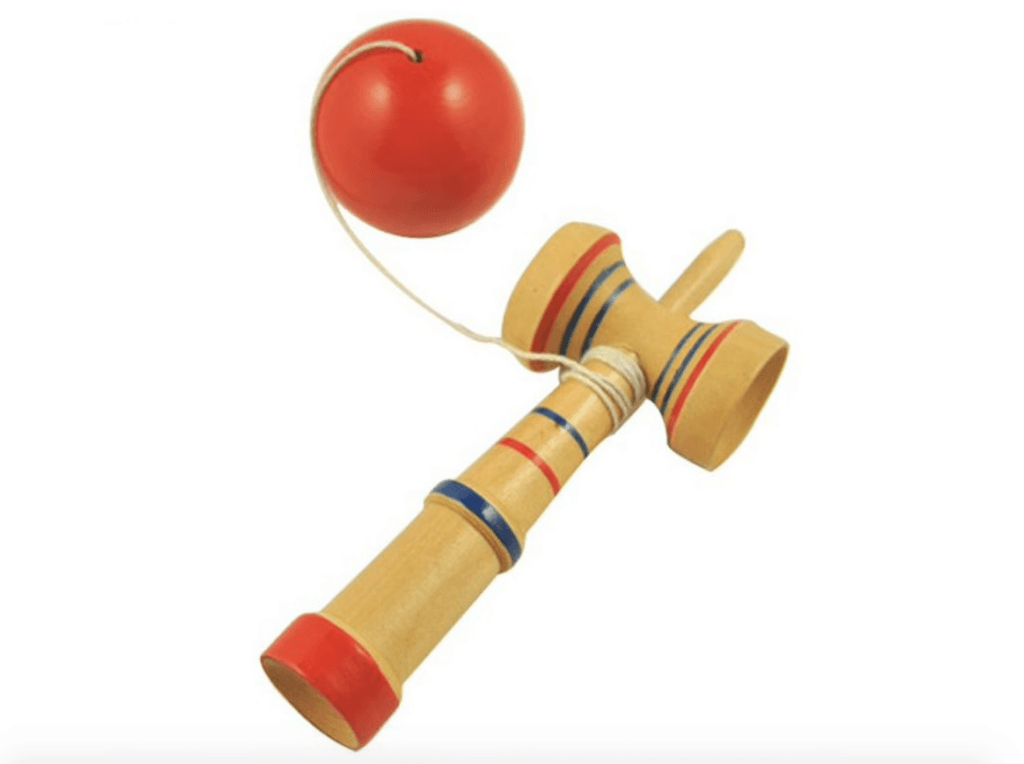 When providing their official signature, Japanese people make use of a hanko stamp. It is equivalent to signing the bottom of a document, but instead of using a pen, people in Japan use a personal stamp. Not only is it easier and faster, the Japanese also regard hanko as a significant part of their culture, for it has been a custom as far back as 57 AD. For the Japanese, a hanko is not just a mere signature stamp – it is a marriage of the rich Japanese history and the Japanese people’s ingenuity. This little stamp is forged by years of upheld tradition and its use will certainly continue for years to come.

Of course, foreigners can also have their names written in Japanese kanji and make their own hanko name seal as well. In Japan, there are hundreds of options when it comes to choosing your very own, customized hanko stamp.You can choose something that is made of metal, plastic, crystal, tusk, titanium, natural stone, or wood. Depending on the material used and the complexity of the Kanji characters, the price of a Hanko seal can range from 1,000 yen to over 30,000 yen. Hanko stamps come in different shapes and sizes, and you can get them from various hole in the wall artisan shops to 100-yen stores, so it is something that could be fun to collect over time.

Today, Hanko stamps are quickly becoming the souvenir of choice for travelers who visit Japan because not only is it something that no one else in the world can have since you have your own name carved on it, but also because it is as if you are taking home with you an important part of Japanese culture. 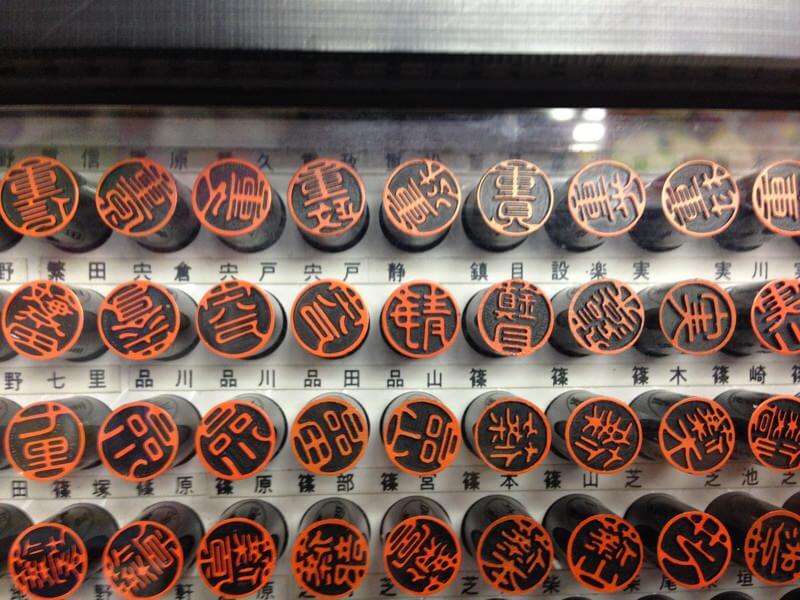 Japan has a solid reputation as being an electronic hub. From headphones, to smartphone cases, to video games, to even rice cookers, Japan has an incredible variety of all kinds of electronics. Many big cities have massive electronics stores such as Bic Camera or Yodobashi Camera, which have floor after floor of any kind of electronic good you could ever want, at reasonable prices too. And, if you’re in Tokyo, you could easily spend a couple of hours in Akihabara, Tokyo’s famous must-see electronics district. 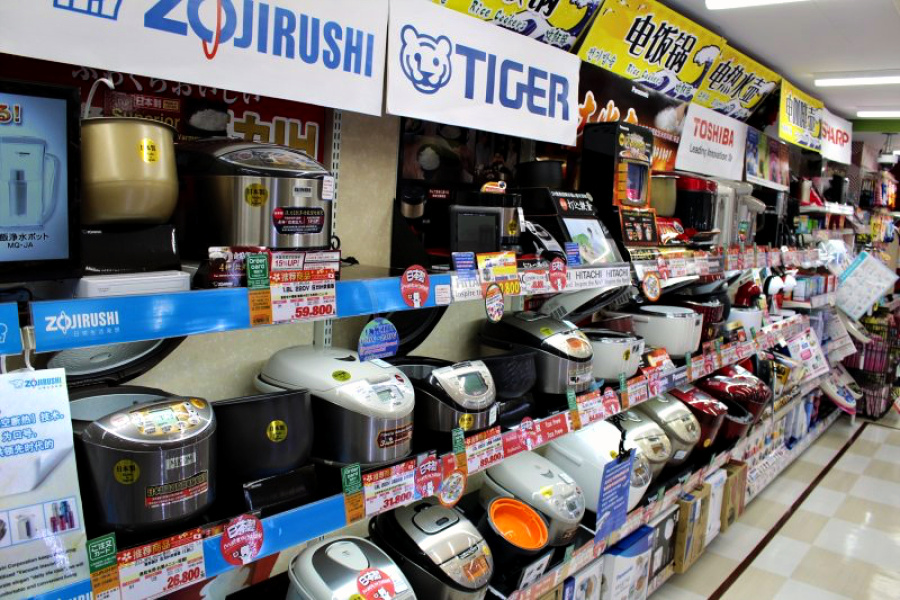 The market for school supplies, pens, and stationery in Japan is simply next-level. Japanese students go crazy for patterned pens, funny pencil pouches, and other themed stationery goods, so there is an overwhelming variety to choose from. Prices depend on the store and item you are looking at, but you can often find inexpensive stationery that is well-made at large variety-goods stores like Loft, Tokyu Hands, and 100-yen shops. Stationery makes a great souvenir as it is unique, practical, and used by people of all ages. It’s also quite affordable and easy to pack in a suitcase to take home! 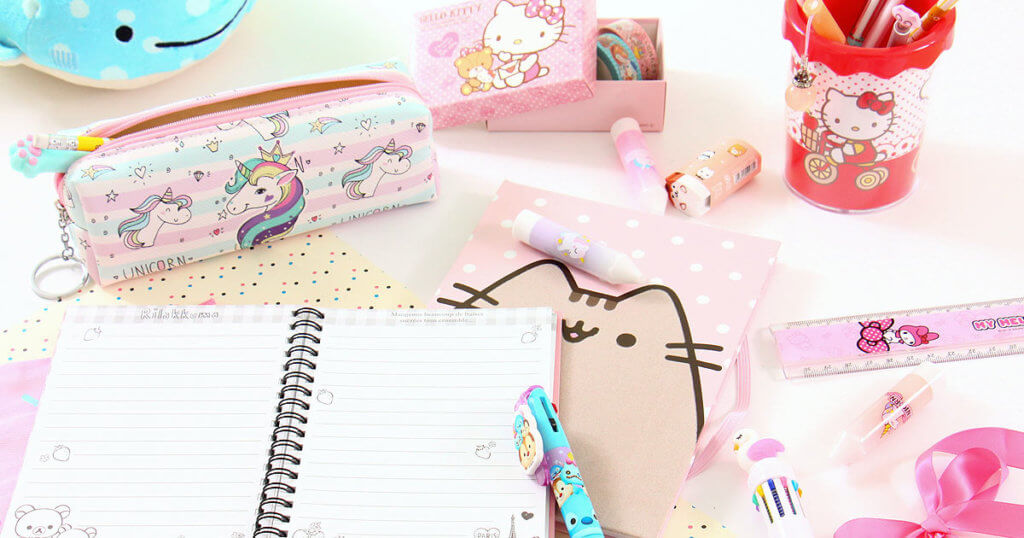 Japanese pottery and porcelain (tojiki 陶磁器; yakimono 焼きもの; tōgei 陶芸) are some of the country’s oldest styles of art. Dating back to the Neolithic period, kilns have produced earthenware, pottery, stoneware, glazed pottery, glazed stoneware, porcelain, and blue-and-white ware. Since the 4th century, Japanese pottery and porcelain was often influenced by the Chinese and Korean cultures, but Japan adapted the Chinese and Korean works into a uniquely Japanese creation. By the 20th century, a distinct Japanese ceramics industry (led by Noritake, Schimid Kreglinger (Kelco), and Toto Ltd.) had grown and evolved. Japanese ceramics remain a popular souvenir to this day.

Buying ceramics as souvenir in Japan may seem impractical for packing in your luggage, but many shops actually have overseas mailing services. At the very least, most shops should at least safely wrap and package what you buy, and you can then mail it home from the local post office. Or, you can just buy a few dishes and cups and pack them securely in your luggage. Then, you can take your ceramics home and either use them or display them as a great reminder from your visit to Japan.

Omamori (御守 or お守り) are Japanese charms that are commonly sold at religious sites and dedicated to particular Shinto deities as well as Buddhist figures. They are blessed and said to provide different forms of luck or protection. Some omamori are quite cute, while others are more traditional looking, and they often have the name of the place where you bought them. There are charms for luck, love, school, money, family, and many more.

Most omamori can be purchased for just a few hundred yen, making them a very affordable souvenir. Because of their small size, aesthetically-pleasing appearance, and not to mention their personalized “blessings”, omamori make a great souvenir for you or a friend or family. You can find omamori charms being sold at almost every major temple or shrine in Japan! 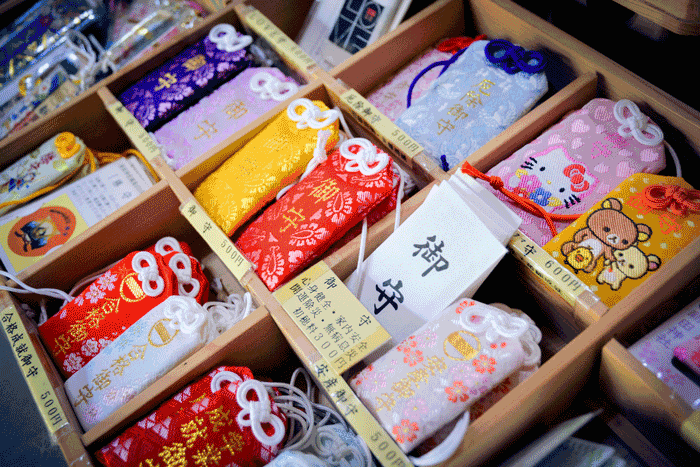