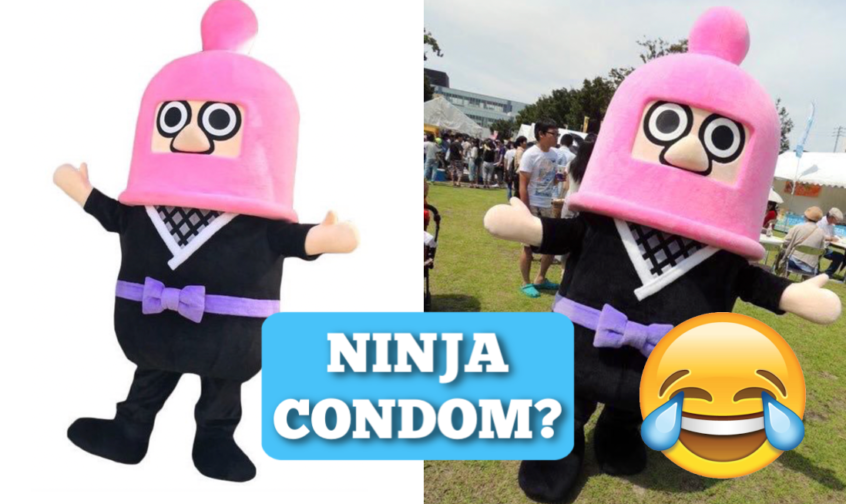 In Japan, almost every city, town, company, or even local event, has its own mascot. Some mascot characters like Rilakkuma or Domo-kun have become household names in Japan, but the vast majority of characters aren’t widely known outside of their local area. There are thousands of different mascots, and some are incredibly strange! You won’t believe these 10 bizarre mascots that actually exist in Japan.

Japanese refer to these original mascots as yuru-chara (yuru kyara, ゆるキャラ).  Yuru-chara is a category of mascot characters that are usually created to promote a place or region, event, organization or business. They are characterized by their cute and/or unusual designs, and often incorporate elements that represent their local culture, history or product.

These kinds of mascots are often created by local government or other local organizations to increase awareness and promote tourism, or even created by a company to build on their brand identity. They may even take on a 3-D form and appear as costumed characters at promotional events and festivals.

The creation and promotion of Yuru-chara themed items has become a popular business, with sales over $16 billion in Japan a year. 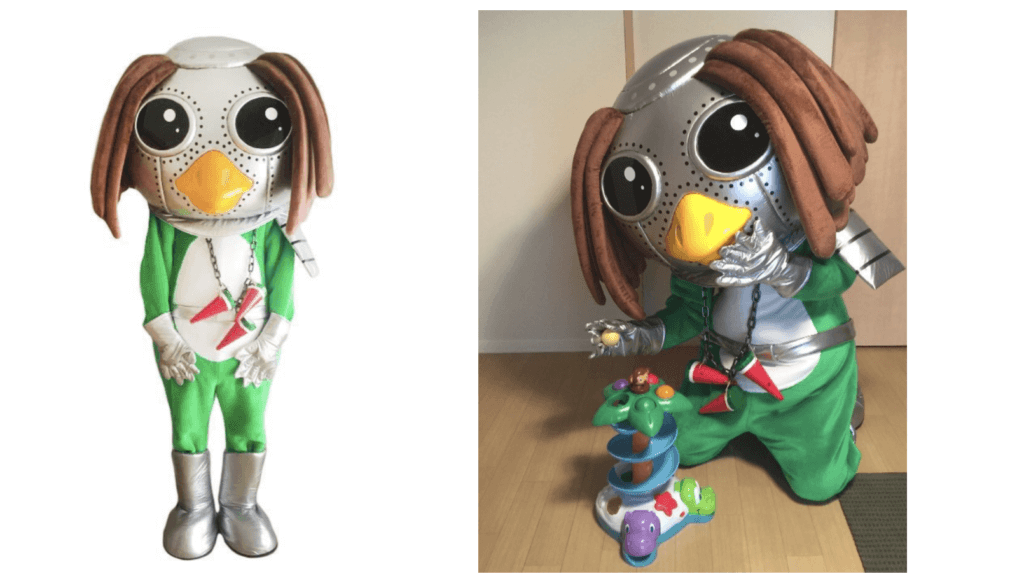 Kappadator or Kappa Dator is the mascot of Proton Toys. This character has quite an interesting backstory: he is originally from the Milky Way, but was sent on a mission to invade Earth. When he entered the atmosphere, everything he owned burned, and he lost all of his possessions. He requested to receive furniture from a secret society, but they sent him toys by mistake. He then became addicted to toys, especially mini cars, and was unable to complete his mission.

Hapisu is a happy sun with a unique multi-colored haircut. He is the mascot of Miyazaki Central Agricultural Cooperative Association in Miyazaki Prefecture. Since 2014, Hapisu has been appearing in local events, marathons, and even on TV in Miyazaki. He’s is said to be a piece of the sun that has fallen and now serves to light up Miyazaki and promote agriculture and happiness. 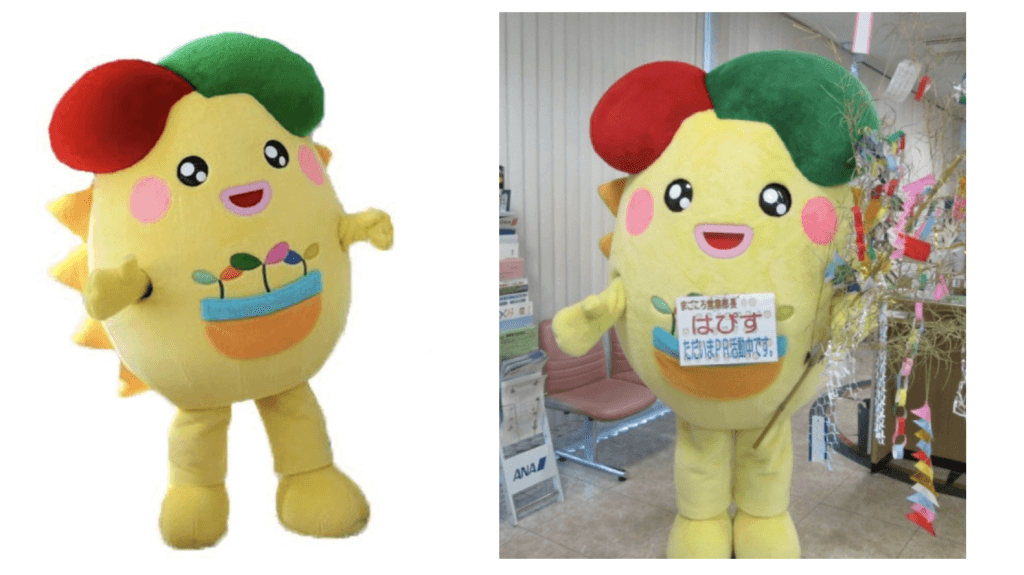 Usadar, the mascot for Lifeguard energy drink, is a camo-patterned rabbit with a giant human-like grin and long eyelash extensions. This high-energy bunny was first designed by Cheerio in 1986, and has been used to promote Lifeguard energy drinks for over 30 years.  Usadar goods are also available online. 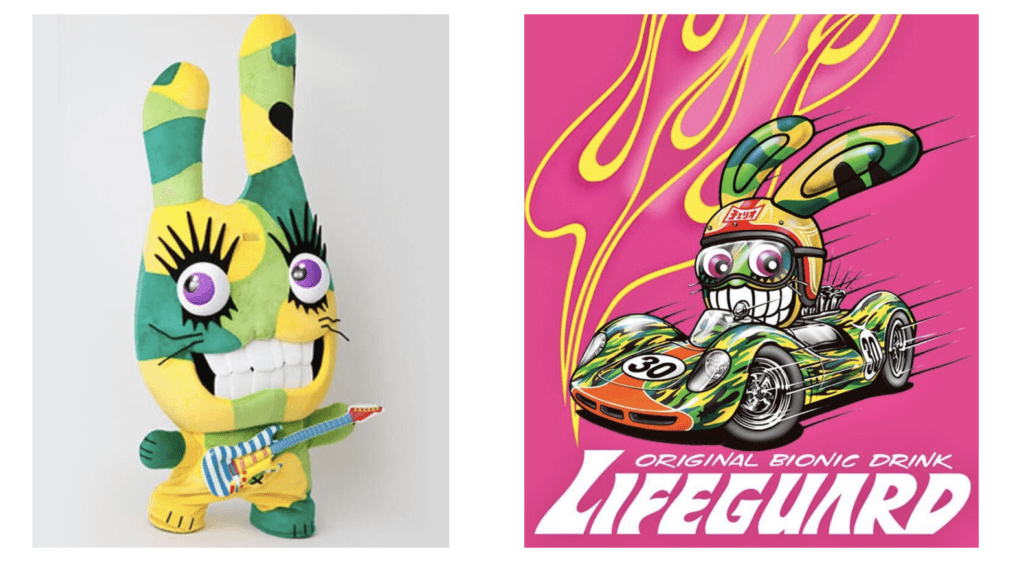 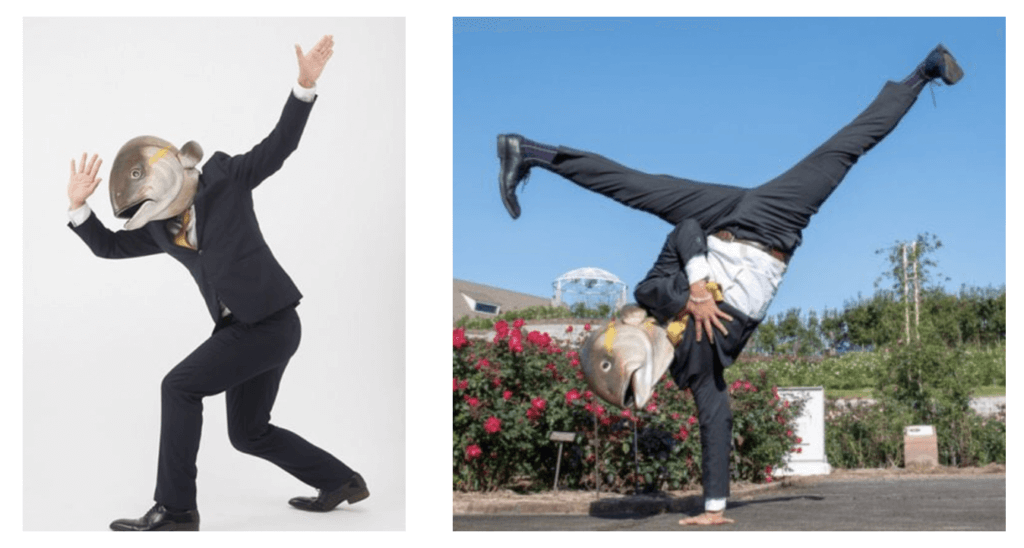 High Bricco-chan are a trio of pop idols who wear colorful latex suits with utility belts. Their heads are a combination of rabbits and train cars. They are the unofficial mascots for the Koumi train line  (小海線 Koumi-sen) that goes from Nagano to Yamanashi, Japan. However, as they are unofficial mascots, High Bricco-chan  are not officially recognized by JR East, the Japan Rail company that operates the Koumi line.

Jumonji Hayato is a suit-wearing egg who is also a ramen enthusiast. He is the official mascot of Risendo, a noodle company based in Akita Prefecture. Jumonji (十文字) means crisscross in Japanese, which is a reference to the black and yellow cross-mark on his forehead.  The 3-D costume version of this character was unveiled in 2013, and was actually made by local housewives who volunteered to construct it. Jumonji Hayato appears in commercials, promotions, flyers, and is even the icon of the official Risendo Facebook page. 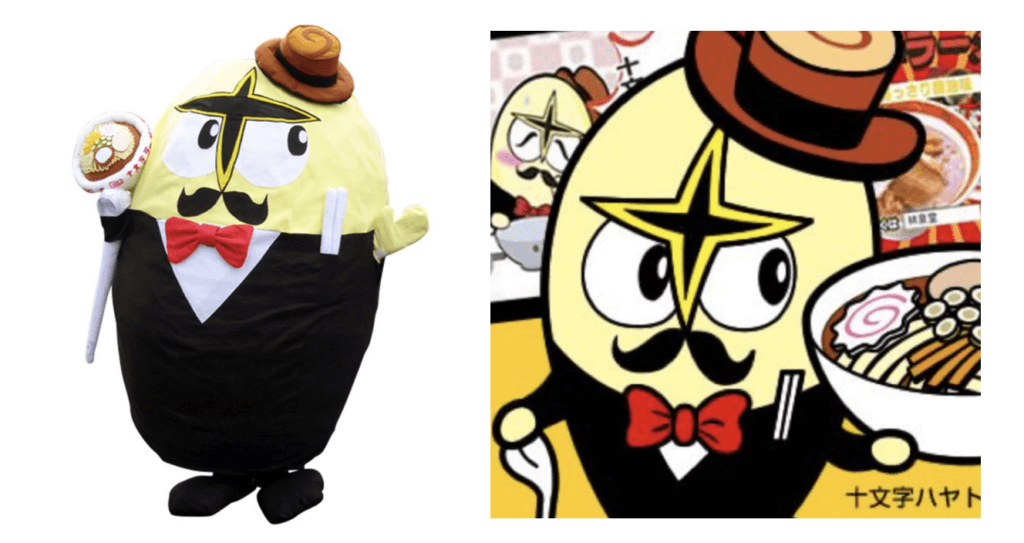 Chobin-kun is a living coin purse from outer space. This happy little guy is the official mascot of Chobirich. a money-saving website in Japan. Chobin-kun is male, 15cm long, and weighs 7 kilograms. In his free time, he enjoys playing games, earning points, and eating his favorite food, fried shrimp. He even has a girlfriend named Chobirina-chan, a pink coin purse who loves online shopping and eating strawberry shortcake. The Chobirich website, social media, flyers, and promotions all feature the face and outline of Chobin-kun. His outfit or accessories might change, but one thing stays the same – Chobin-kun is always smiling! 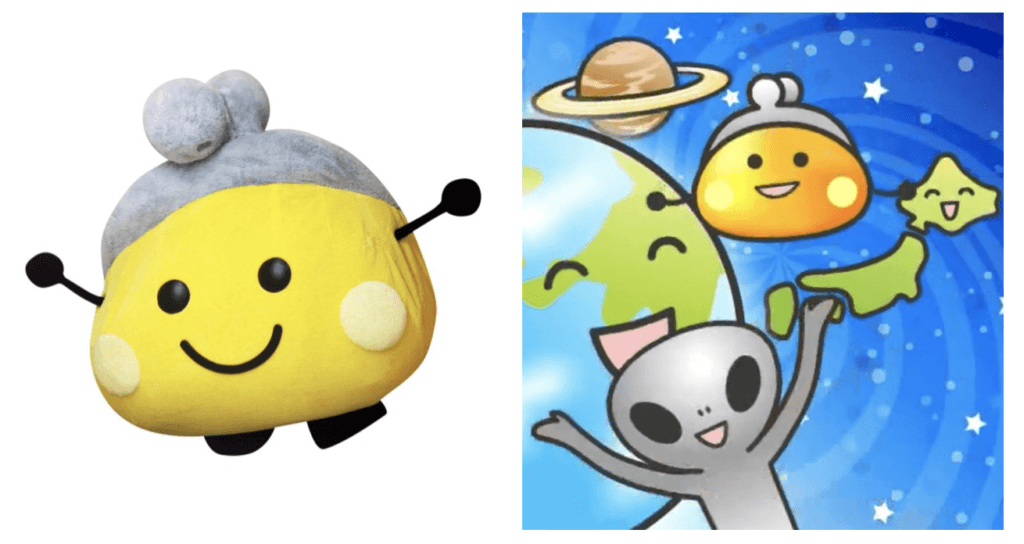 Tsukihashi Wataru is the mascot for Kyoto’s Togetsukyo Bridge. He is a tall human-shaped white figure with his name on his stomach and a bridge on his back. His name is actually a play on words, as “Tsukihashi Wataru” actually uses the same kanji as “Togetsukyo,” bridge does. On paper, Tsukihashi Wataru looks a little cute, but in person, his gaping mouth and ghost-like appearance can be a little frightening to children! 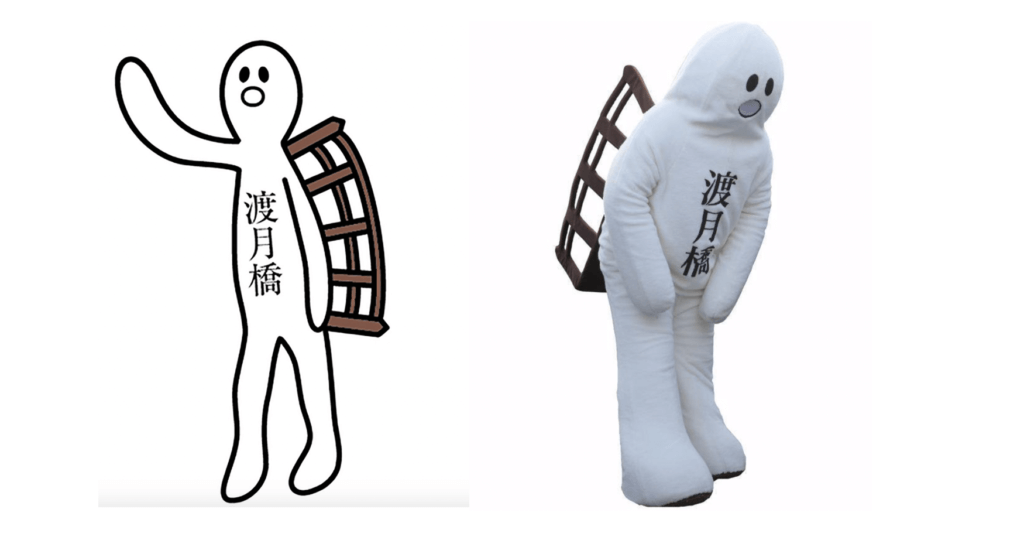 One of the newer mascots on our list is Matagi no Momiji-chan (またぎのもみじちゃん) from Hokkaido. Momiji-chan is a cute pink sika deer that always carries a gun. It is said that he has turned the tables and taken on a tough “the hunted has become the hunter” attitude. He was created by Asako Hashi, the same person who designed the popular character Jingisukan no Jin-kun.

Momiji-chan was revealed at the World Character Summit in Hanyū (世界キャラクターさみっとin羽生) in 2016. He was a huge hit because of the way he would interact with people – often jokingly pointing his little gun at other mascots at the summit!

Jimmy Hattori, ninja condom, is a Japanese safe sex mascot. Just as “ninja condom” suggests, he is a ninja with a large pink condom on his head. Jimmy Hattori is used to promote safe sex in Japan, and he frequently appears at a variety of AIDS awareness and charity events across Japan. His official Twitter account has over 2,000 tweets and over 700 dedicated followers. 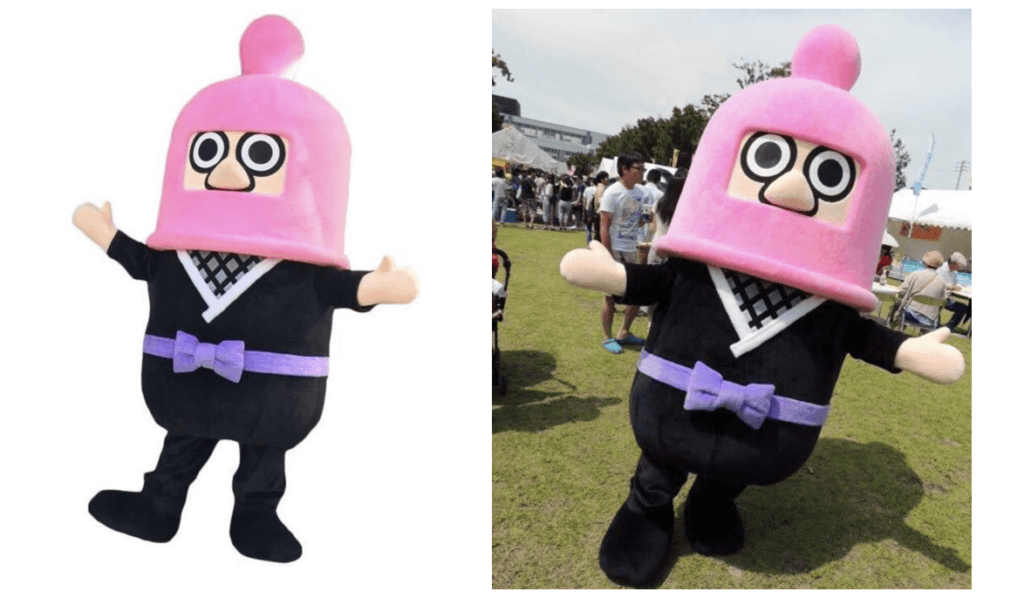