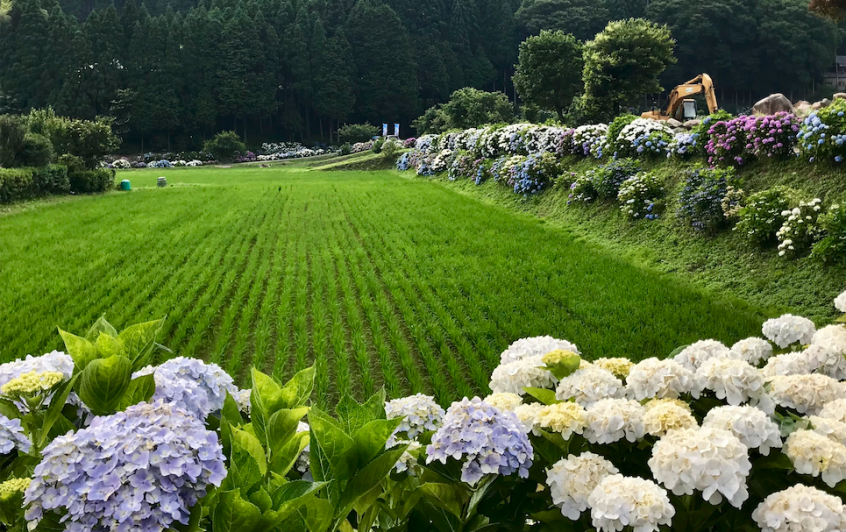 Every year in June, along with the rainy season, pretty clusters of colorful hydrangea flowers bloom across Japan. The beautiful flowers are called ajisai (あじさい、紫陽花) in Japanese. Some places are even famous for the incredible number and variety of hydrangea flowers. Here are 10 popular hydrangea-viewing spots in Japan! 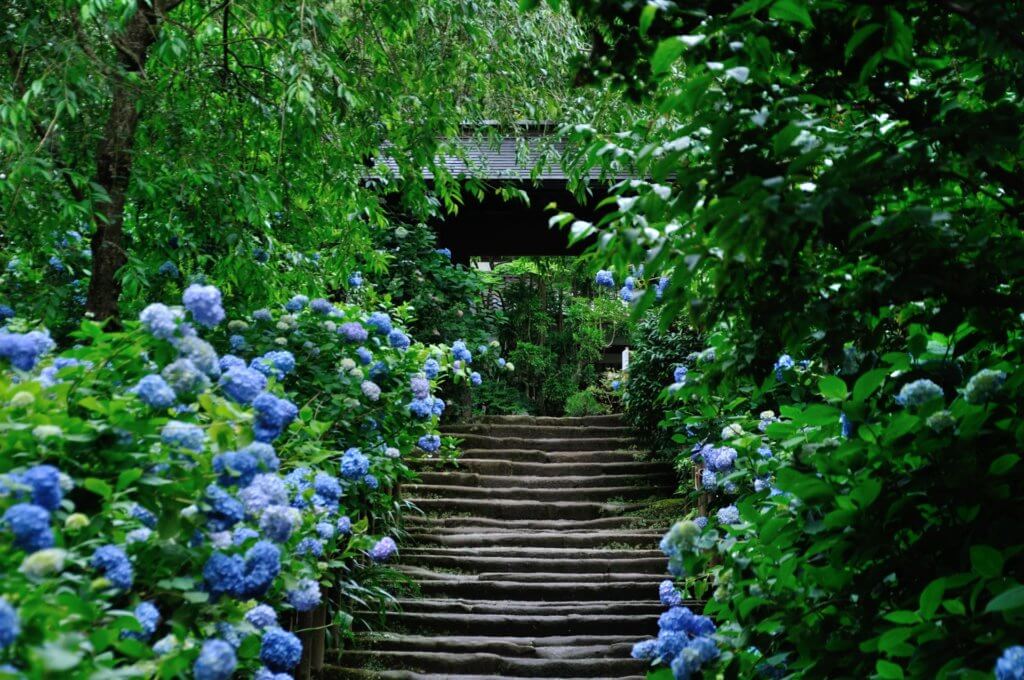 Meigetsu-in Temple in Kamakura Prefecture tops every list of places to view hydrangea flowers in Japan. Meigetsu-in Temple is actually so popular during the June hydrangea season that it has actually earned the nickname “Ajisai-dera” or “Hydrangea Temple” in English.  Almost all of the hydrangea here are of the Hime Ajisai (“Princess Hydrangea”) variety, named for their pale blue color.

The iconic stone stairway in the center of the temple’s lush green grounds is a very popular place to see and photograph the hydrangea flowers. The hydrangeas are spread out along the stairway as well as around the grounds, which also contain a bamboo forest and a tea house.

The stone steps lead up to the main temple building, which offers another famous photo spot –  a circular window from which viewers can look out at the inner garden behind the main building. This area is open to the public only twice a year, when the irises bloom in June and when the maple trees turn red in autumn. 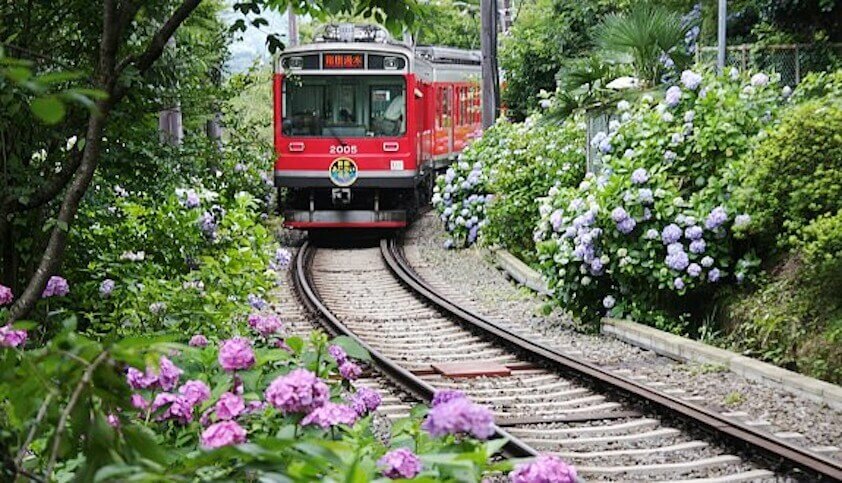 The Hakone Tozan Railway, which runs from Hakone-Yumoto Station to Gora Station, includes a stunning stretch of track offering views of thousands of flowering hydrangeas. There are close to 10,000 hydrangeas along the railway, earning it the nickname the “Hydrangea Train”. During Japan’s rainy season, this 40-minute train ride passes through a sea of hydrangea colored blue and pink.

During the blooming period, the Hakone Railway also runs a temporary night train called “The Purple Night Flower” (夜あじさい号). This sightseeing train travels at a slower speed to allow for photo opportunities, as well as stops at selected spots where passengers can get an up-close look at the hydrangeas, which are illuminated at night. Note: These special night trains do require a reservation in advance. 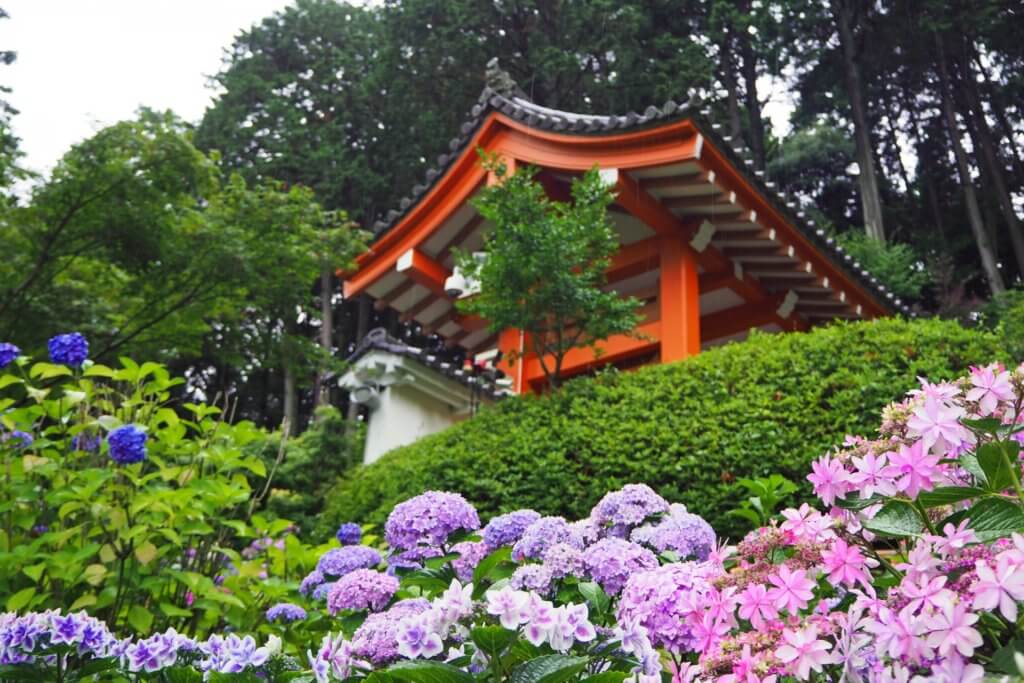 Located in Uji City in Kyoto, Mimuroto Shrine is one of the most famous hydrangea-viewing spots in the entire Kansai region of Japan. There are approximately 12,000 flowers in the area, and among that are more than 50 varieties of hydrangea. Every year in June, the vast hillside is blanketed in pink, blue, and purple hydrangea flowers.

The temple dates back to 770, and the old architecture nicely complements the endless flowers. There is also a Flower Tea House on the temple grounds where visitors can enjoy a Hydrangea Sundae. 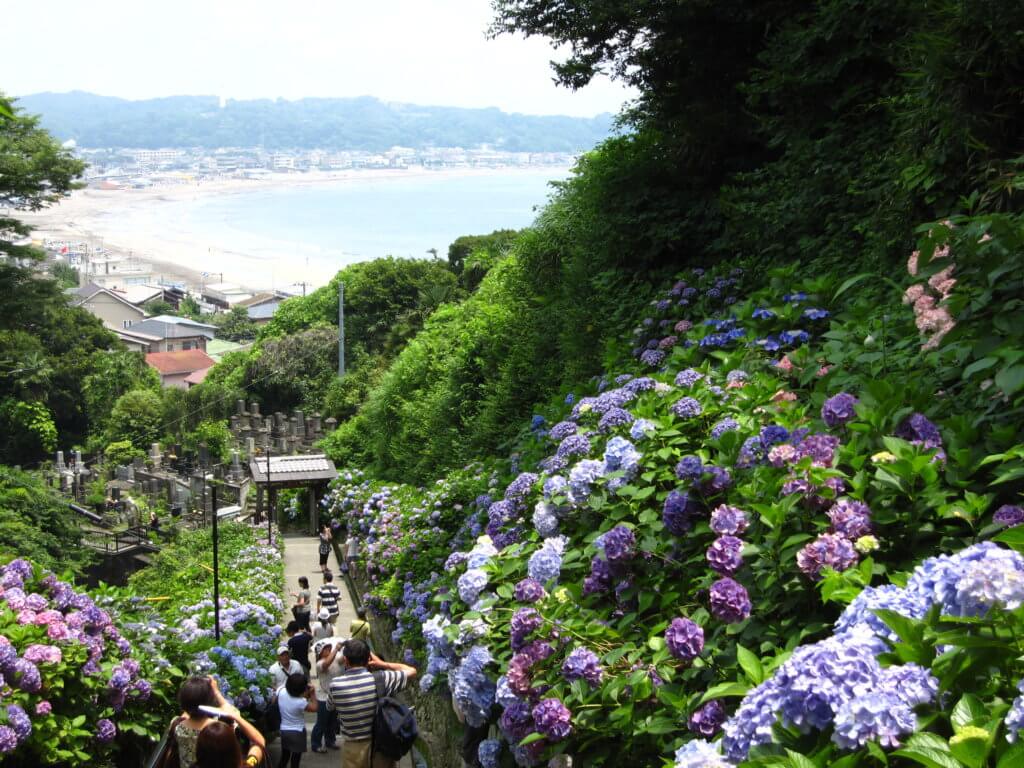 Hasedera is one of the most famous temples in Kamakura for a number of reasons besides just hydrangea flowers. The temple is home to an impressive 11-headed wooden statue of Kannon, the Goddess of Mercy, hundreds of small Jizo statues, a Benzaiten cave, and a hillside terrace that offers incredible views of both the Sagami Bay and Kamakura City.

In June each year, the Hasedera temple grounds and its scenic hillside bloom with close to 2,500 hydrangeas of all sorts of colors, making the already photogenic temple reach its full picturesque potential. 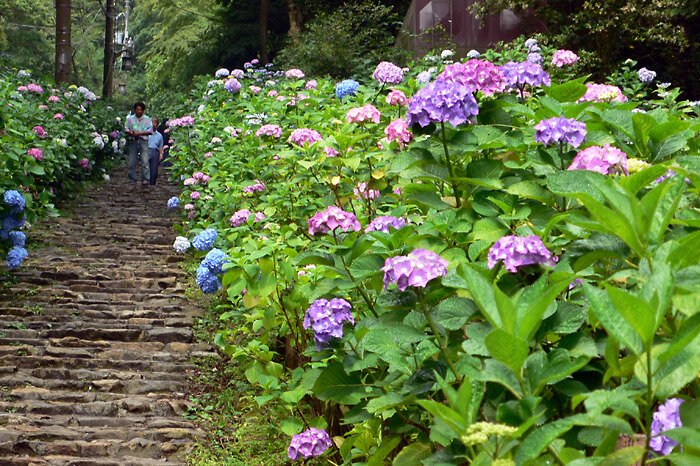 The Ohirasan Shrine is a mountaintop shrine that is famous for being an excellent place to view over 2,500 hydrangea flowers that were planted by the Lions Club in 1974. Leading up the “Hydrangea Slope” is a stairway of 1,000 steps that are made of stone taken from the mountain itself.  Along the pathway up, a there is a tea house marked by a traditional red umbrella.

This shrine is also the site of the annual Tochigi Hydrangea Festival (とちぎあじさいまつり) held every year from mid June to mid July. 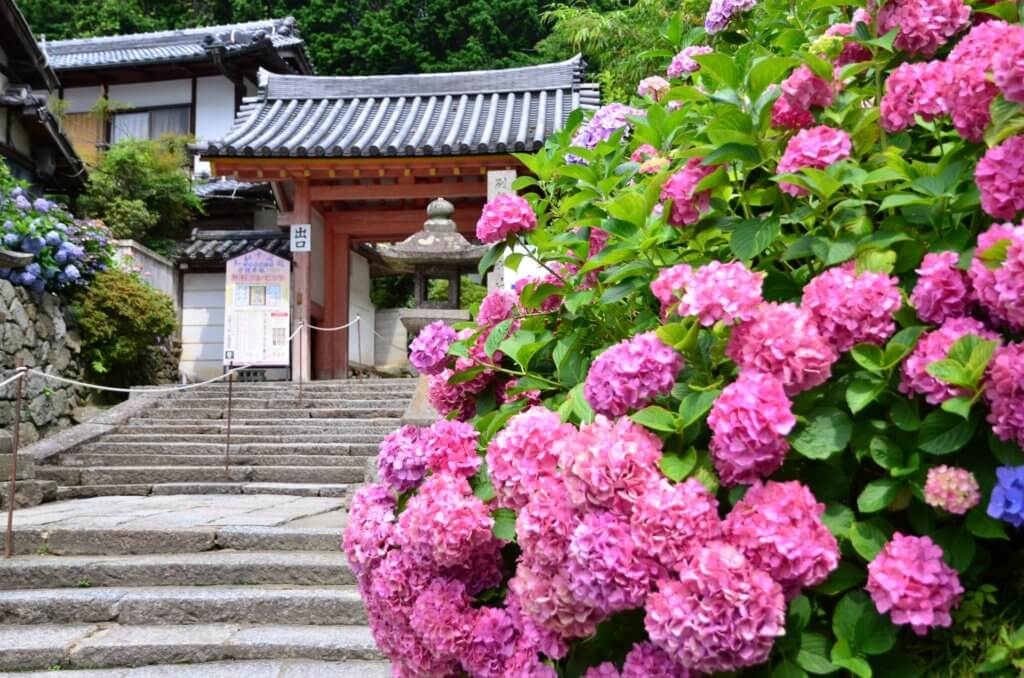 The Yata-dera Temple is another location that is famous for being one of the best hydrangea-viewing spots in the Kansai region. The spacious temple grounds are home to over 1,ooo hydrangeas in 60 different varieties – both round and heart-shaped. There are stone steps leading up to the shrine that are lined by especially lush clusters of hydrangea flowers on both sides.

Yata-dera Temple also has an area called the “Hydrangea Flower Garden”, which consists of a large area with a hydrangea trail and an observatory. It is a popular place for people to relax, take a stroll and take pictures. During the peak blooming season during June and July, extra buses run from Kintetsu Koriyama Station, and people visiting the temple can buy special bento lunches that have been inspired by the hydrangea flowers. 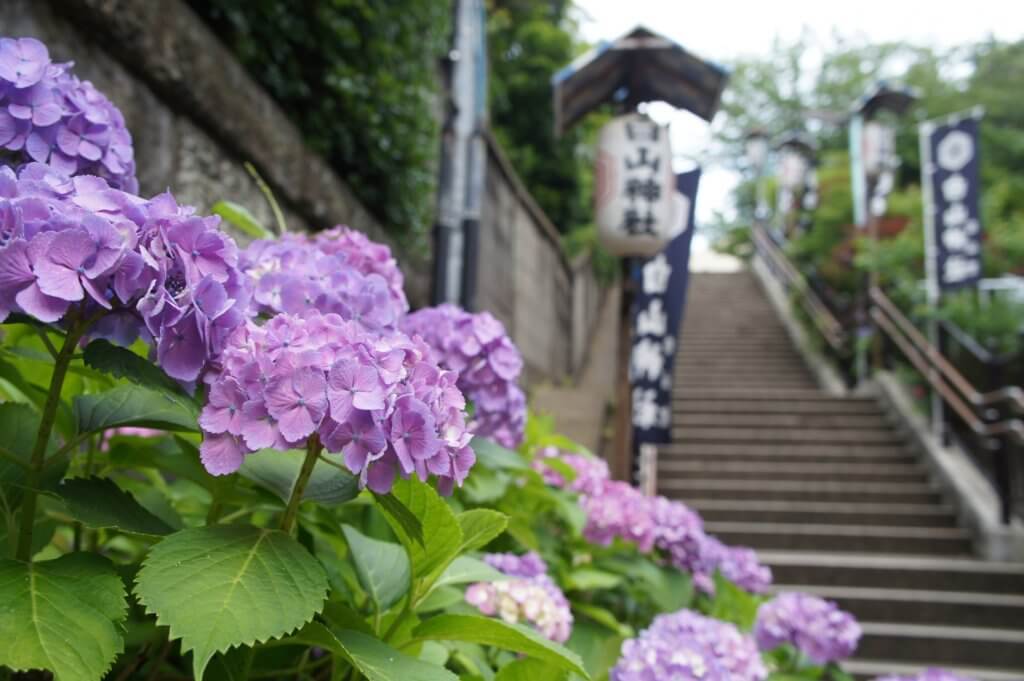 Hakusan Shrine is a Shinto shrine with a long history, as it was first established back in 948. It is a relatively small shrine, but it is one of the most popular hydrangea-viewing spots in the Tokyo area. Every year, over 3,000 hydrangeas around both the Hakusan Shrine and Hakusan Park all bloom during Japan’s rainy season.

This shrine is also the site for the Bunkyo Hydrangea Festival held every year in June. During the festival period, a number of food stalls as well as pop-up tents selling potted hydrangeas line the path leading up to the shrine. 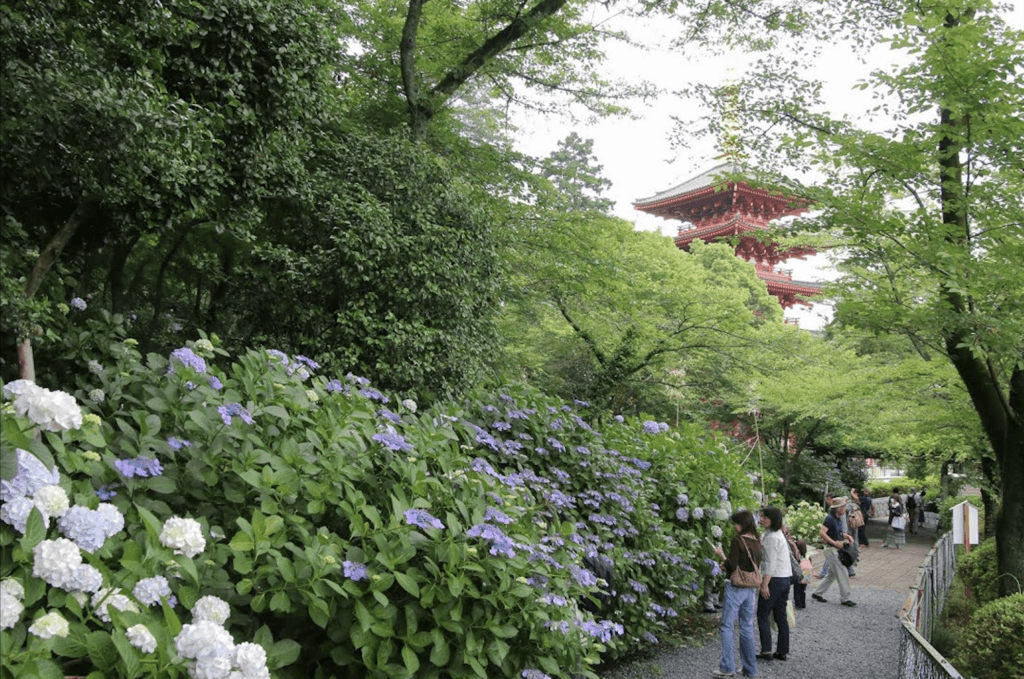 Located in Hino City on the western side of the Tokyo area, Takahata-Fudoson Kongoji Temple is both historically and culturally important to Japan. As a result of its isolated location being on the outer edge of Tokyo, it remained unharmed during WWII, and much of the temple is now designated as Cultural Important Properties of Japan.

Takahata Fudoson Kongoji is surrounded by a beautiful forested hillside that is also filled with hydrangea flowers that bloom every year in June. The temple and its forests are known as one of the best places in Tokyo for hydrangea-viewing. There are close to 250 species and over 7,800 hydrangeas on the hill behind the temple buildings. Scattered throughout the forest are also 88 jizo statues, inspired by the historic Shikoku 88-temple pilgrimage. Visitors today can also do their own mini-pilgrimage through the hydrangea-filled forest. 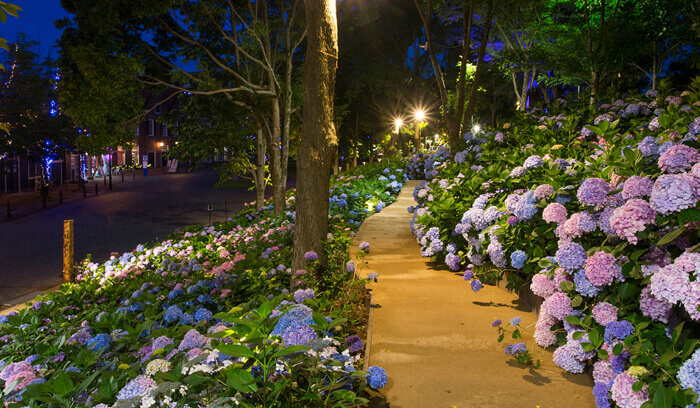 There are as many as 1,100 varieties of Hydrangeas here, which the park actually features during its annual hydrangea celebration. The park has several sections showcasing a variety of hydrangea, such as the popular Hydrangea Road, the Hydrangea Wall, and even a Hydrangea market where visitors can buy a variety of plants and Hydrangea-themed goods. The park also has a hydrangea light-up show at night. 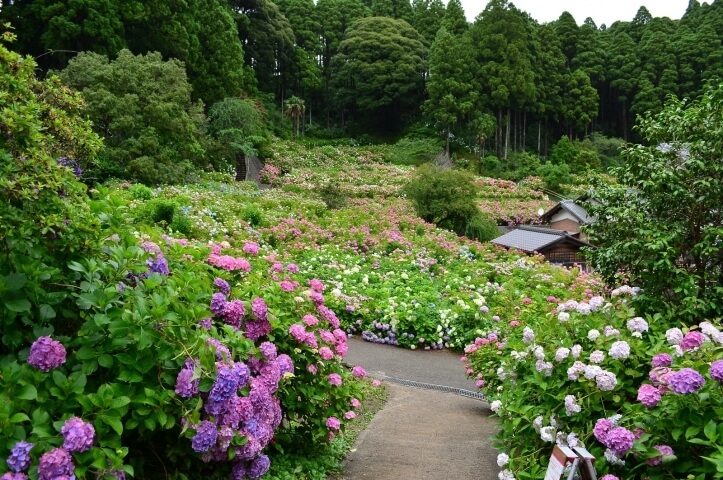 Known as “Hattori-noen Ajisai-yashiki” in Japanese, this charming little house in Chiba Prefecture is surrounded by a landscape garden that looks like something straight out of a Studio Ghibli film. Unlike popular temples and shrines which fill with tourists during hydrangea season, the Hattori Farm Hydrangea House is a lesser-known out-of-the-way sightseeing spot. Since the early 1990s, ever year in June, the owners have opened their doors to the public to let people come and take in the sight of more than 10,o00 shrubs.

There are 300 varieties of hydrangeas in all colors of blue, purple, red, pink, and white. The flowers cover the entire hillside around the house and spread up to the wooded ridgeline, and visitors can walk through several paths and stairs to appreciate the incredible garden from all angles. There are also 2 shelters for people to rest and enjoy the view while sitting comfortably. At the entrance, visitors can buy locally-grown produce as well as special hydrangea-related products like hydrangea namagashi sweets. 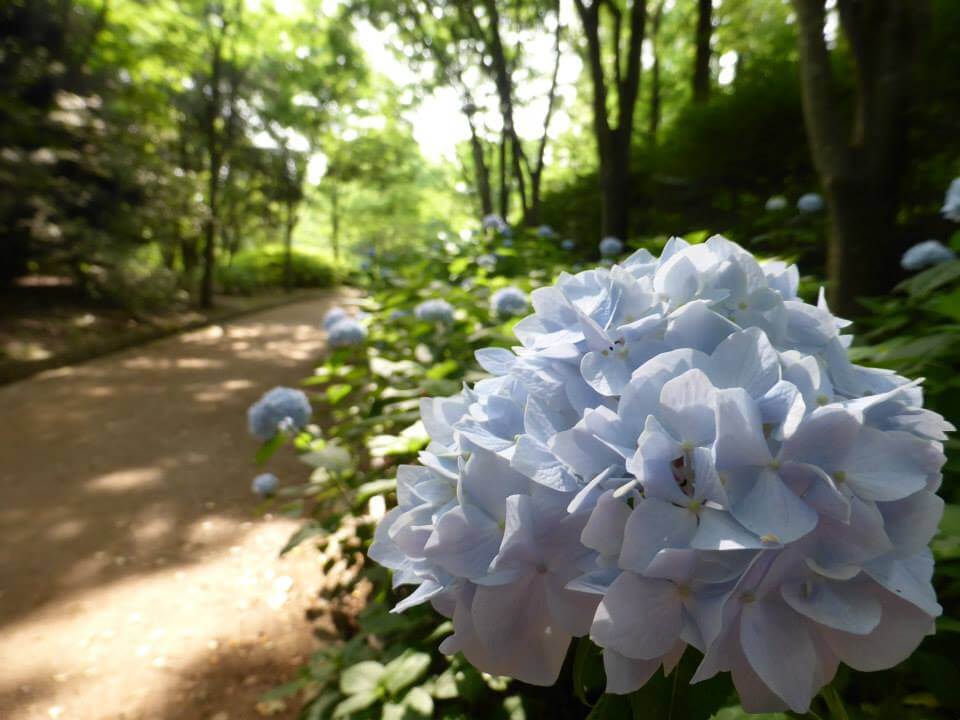 Said to be one of the best Hydrangea-viewing spots in the entire Kansai region, the Kobe City Forest Botanical Garden (pronounced Kōbe-shi Shinrin Shokubutsu-en in Japanese) is a massive botanical garden and arboretum located near Mount Maya in Kobe, Japan. There are several hiking course options, all around an hour each to complete. From the trails you can view most of the garden’s impressive collection of 1,200 trees and shrubs both native to Japan and those imported from the rest of the world.

Their collection of cherry trees is especially popular, as well as the Momiji maples trees in the fall. The Kobe City Forest Botanical Garden also includes an entire section for Hydrangea, as it is actually Kobe City’s official flower. The garden’s annual “Hydrangea Walk in the Forest” event is popular during the start of summer; when the hydrangea are in bloom.  You can experience this from early June until early July, or about a month. There is a quiz rally and guided tours are conducted by the staff, though they are all in Japanese.  Official Website